The Amsterdam Museum of Torture is listed as one of the world’s strangest museums — and when you walk through this maze of shadowy rooms, running your fingers over cold wooden and metal instruments that have elicited screams of terror, it’s the stuff of nightmares. 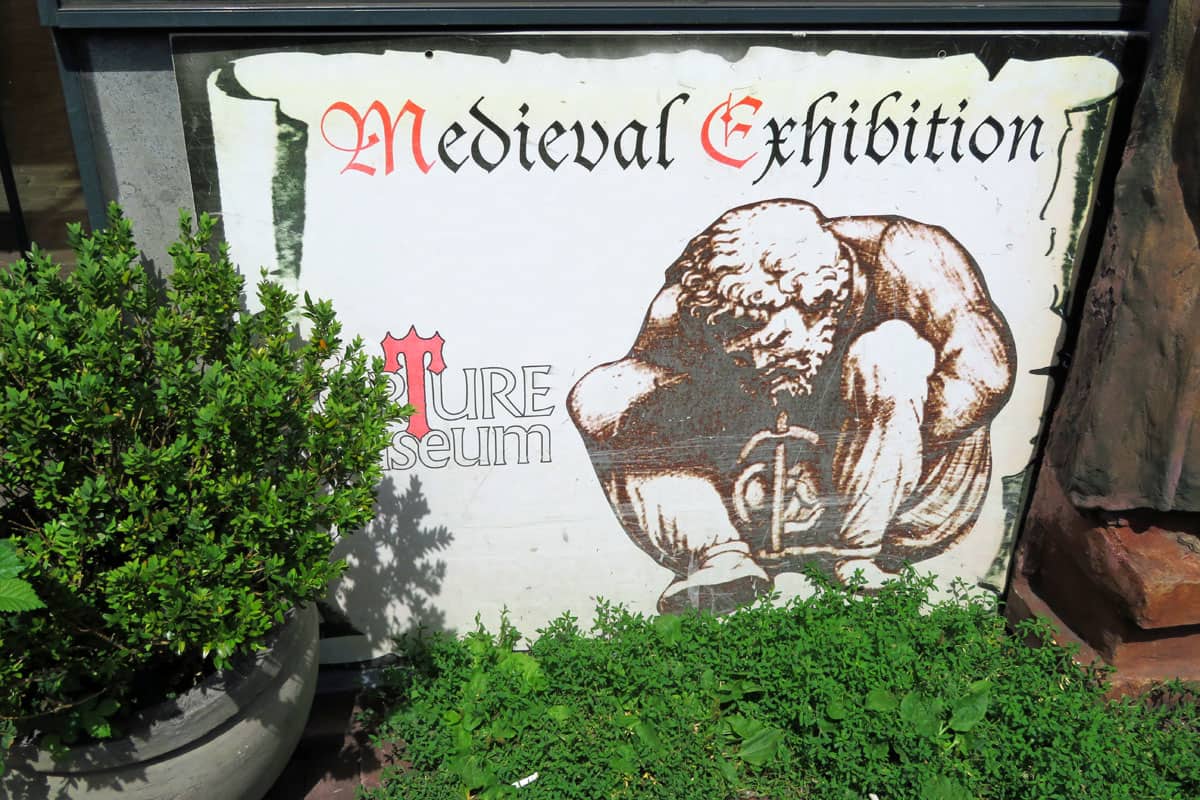 The medieval period of world history (5th to the 15th centuries) was violent and often exacted punishment through torture. However, torture also carried on into the Inquisition, which lasted for 700 years (given as 1231 to 1826).

From the Spanish Inquisition to the Mexican Inquisition, it took various forms in countries around the world. Until a few centuries ago, visitors to many European cities would have seen a scaffold for hangings in the marketplace and a gallows field at the city gate.

We visited the Amsterdam Torture Museum during our European tour last summer. Its main exhibit, Punishments and Verdicts of the Middle Ages, contains 40+ instruments of torture. While they’re fascinating, the drawings depicting their usage in medieval society really packed a punch, as they say. I couldn’t imagine how a number of them would have been used, but the graphics made it all too clear.

This mask below doesn’t have any penetrating nails or thumb screws or stretching devices, but still inflicts torture. Can you guess what crimes it was designed to punish? (Click on the tab, About the Mask, to find out more.) 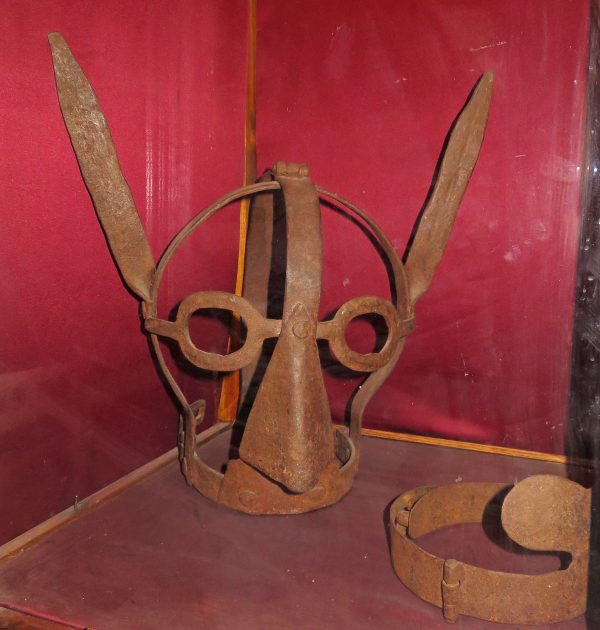 Mask at the Amsterdam Torture Museum. 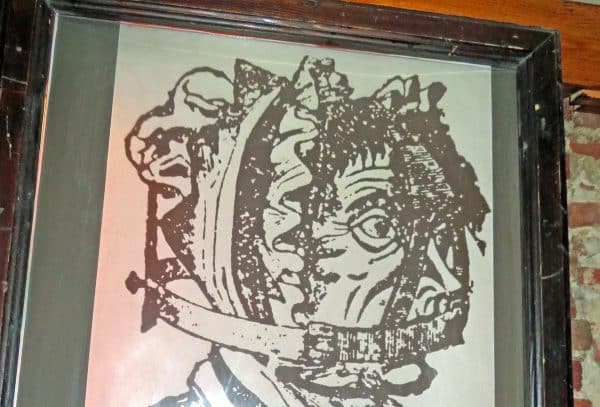 Drawing of a medieval woman wearing the mask as a torture device.

The mask was used during medieval times to curb free speech, one of the most important freedoms we’re guaranteed in modern society. Criticisms of those in power, of course, wasn’t tolerated, along with negative comments on the church or society.

However, the mask also punished gossip, which was considered disorderly conduct. In fact, another version of this mask is called Scold’s Bridle, and was used in England into the 1800s in workhouses as a punishment for “rude, clamorous women,” to keep them from speaking.

The mask made for public humiliation much more than physical, although it was impossible to talk, eat, or drink while wearing it. 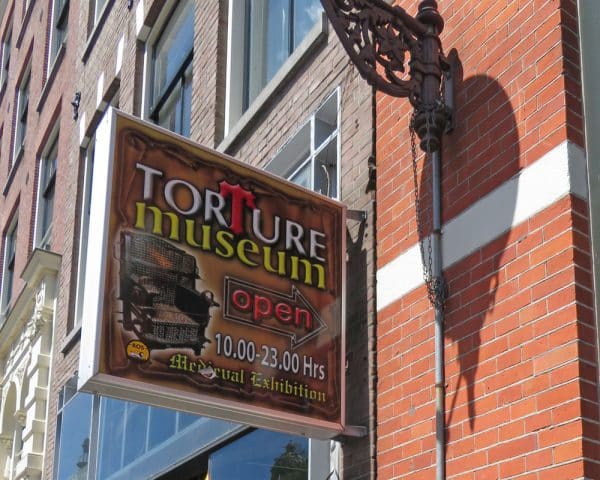 Each darkened room of the Torture Museum has several exhibits consisting of an instrument of torture or two, illustration showing their usage, and a write-up giving names and descriptions. It took us about 45 minutes or so to go through.

Here are some of the torture devices, along with links to tell you more about how they were used.

Stocks have been used around the world, including North America. They mainly punished petty crimes and were mostly humiliating, depending on what passers-by threw at the criminal held securely by neck and hands. Left out in the sun, though, or battered by stones, the stocks could be a death penalty. 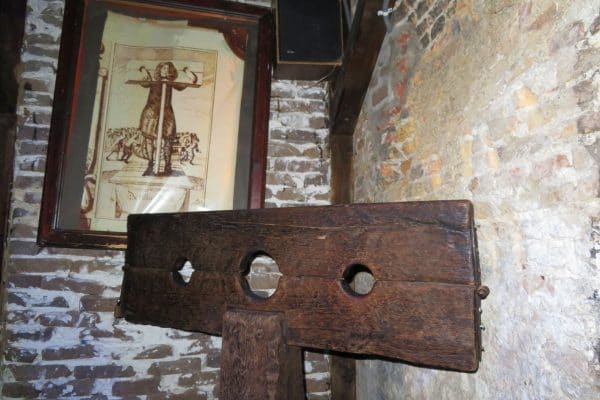 Stocks in the Amsterdam Torture Museum. 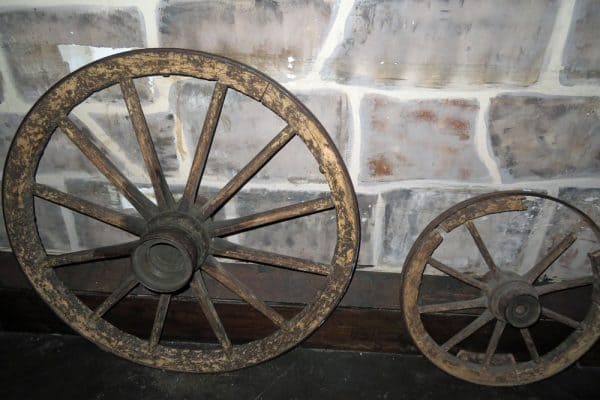 The wheel used as a torture device in the Middle Ages.

While the invention of the wheel is one of the most important steps in the development of civilizations, some could argue that wheeled transportation contributed more to power and warfare than anything else. And how were wheels used as instruments of torture? Well, it was a particularly gruesome way of killing someone, as their limbs were systematically broken and woven around the wheel spokes. 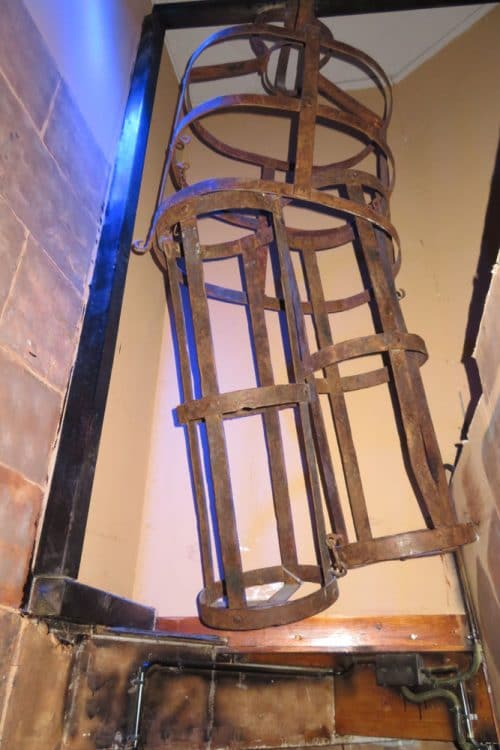 Cage in the Amsterdam Torture Museum.

The cage was a coffin-like device that imprisoned a criminal and hung him up to die, rather than burying him. Victims were pecked by birds, nibbled on by animals, and baked in the sun.

The Torture Museum is open daily from before lunch until 11 pm at night. We stayed a couple of blocks from the Amsterdam Centraal Train Station on Damrak, and it was an easy walk to the Torture Museum on the Munt square (Muntplein), on the left bank of the Singel canal. It’s also close to the Kalvertoren shopping Mall and the Flower Market.