Berlin: A City of Glamour & Grit

Take these Berlin day trips to explore the history of this fascinating city.
;
Lonely Planet describes Berlin as a combo of glamour and grit. Truly, when you contrast the restored Reichstag building of the late 1800s, which is now home to the country’s parliament, with the last standing cement chunks of the Berlin Wall, this European capital has a remarkable story.

Our visit to Berlin was just a day long, but we managed to get a feel for the turbulent history of the city, along with its beauty.

We arrived late in the afternoon by train. Our accommodations were at the Hotel Amano — just 350 meters to walk across the street. Now that’s convenient!

Built in 2009, the hotel was classic modern styling with everything you might want or need. As far as price, it was one of the best values on our trip. We tried both the bar and dining room and found English speaking staff, along with an English menu. Our dinner, at Peter Pan, was gourmet burgers and a shandy. 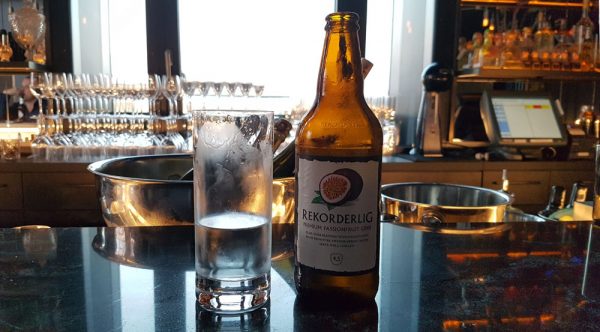 Bar at the Hotel Amano.

Later, drinks on the hotel’s top floor provided a great view of the city — unfortunately the outdoor seating was closed when we were there, so I couldn’t get any photos of the panorama. Even if you can’t get out on the rooftop, it’s a great place to find great service, security, and privacy, as it’s reserved for hotel guests. 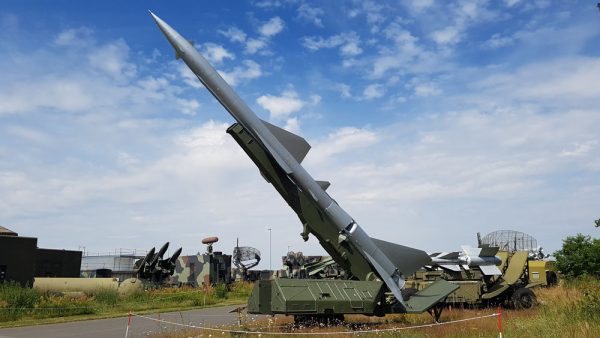 While the most-visited attractions in Berlin include Charlottenburg Palace and Park, Museum Island, and historic churches, we’d selected an off-the-beaten path museum, the Bundeswehr Military Museum, as our starting point.

The museum is situated on the former Berlin-Gatow Airfield. It’s a branch of the Military History Museum of the Bundeswehr in Dresden, which focuses on the cultural history of violence. The Berlin location covers air warfare, guiding visitors to reflect on the way that air warfare changed the way we think of war.

Covering about a million square meters, the open air museum has two hangars opened up with exhibitions. The remainder of the 70 aircraft and more than 60 warfare-related items, mainly from the Cold War period, are lined up on the grounds.

While Bus 135, H Seekorso/ Kurpromenade is supposed to get you to the community outside the museum gates, we took a taxi, which was an adventure on its own. 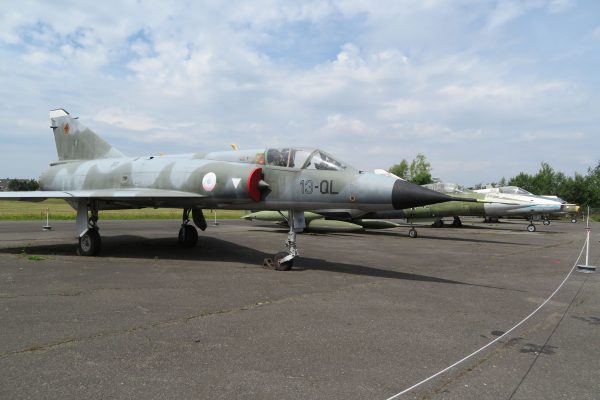 It cost $40 Euros each way, but since museum admission was free, was reasonable for four adults. Obviously by the reception we had at the gate (which stays locked with security staff to open it throughout the day), few people take the taxi route.

Signage on the displays was mostly in German, with a few English signs here and there, which did make it challenging to get much information about the artifacts. The planes, though, generally had things like size and speed listed, so we could go through them making some comparisons. 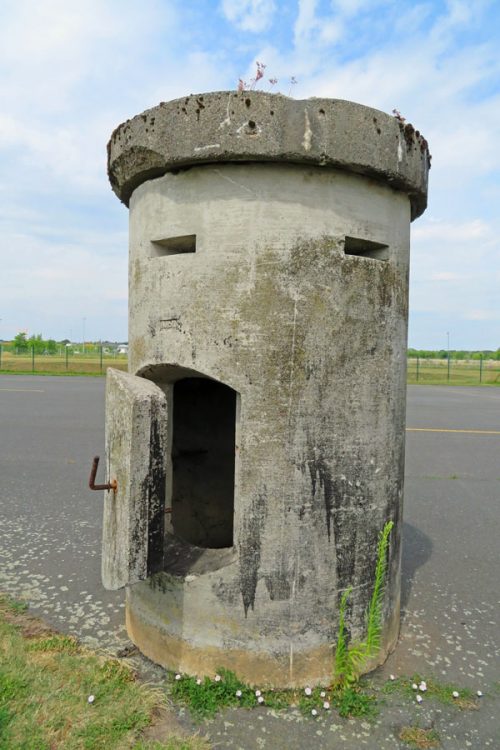 One of my favorite artifacts was what appeared to be an air raid shelter for a very limited number of people — it was about telephone booth size. Made of cement (rebar stuck out here and there), it had air holes at the top and a tight fitting door. Quite amazing!

It was also fascinating to see the early radar equipment. 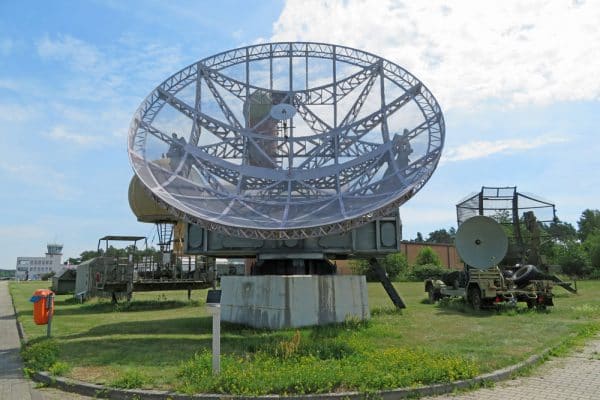 For more information on Berlin day trips to the museum, click here for the PDF brochure. 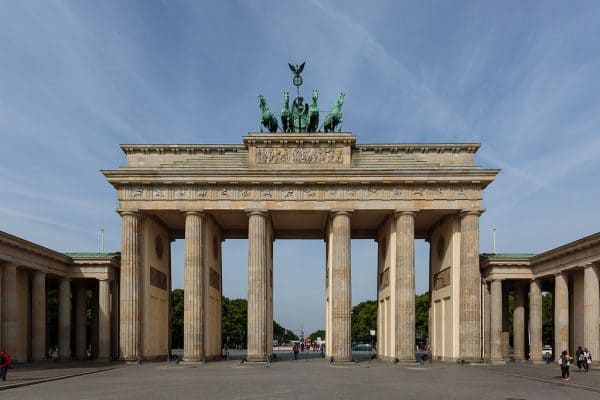 By Pierre-Selim Huard (Self-photographed) [CC BY 4.0 (http://creativecommons.org/licenses/by/4.0)], via Wikimedia Commons

Our next stop after the Military Museum was to see the Berlin Wall, so we took a taxi directly to the site. That meant we also got to see a number of the most important attractions, starting with the Brandenburg Gate, one of Berlin’s most iconic historic sites. Built in 1791, the gate stands sentinel over Pariser Platz. 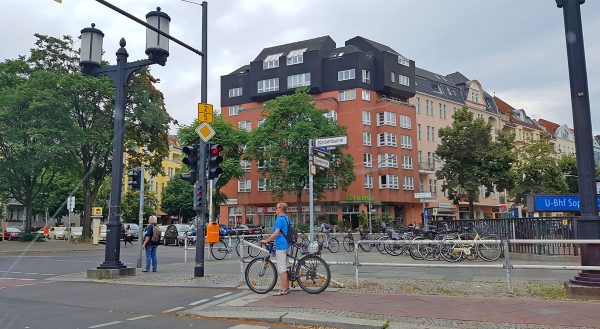 The architecture varied throughout the city, although it’s predominantly new, since so much of Berlin was bombed during WWII. You can check out the architecture of some of its most important buildings here. 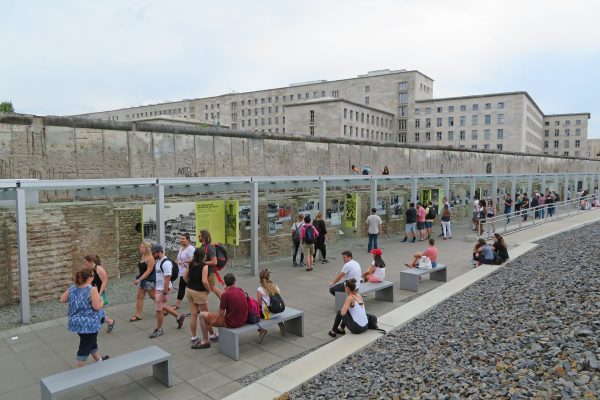 Visitors to the Berlin Wall

The Berlin Wall is part of the Topography of Terror Documentation Centre, situated at the historic headquarters of the “Third Reich” Secret State Police, the SS and the Reich Security Main Office.

Built in August, 1961, just months after Kennedy became President of the United States, the 140 km (87 miles) Wall once separated West Berlin from East Germany and East Berlin. As a child, I don’t remember it going up — it just always was — but I celebrated with the world when it came down in 1989. 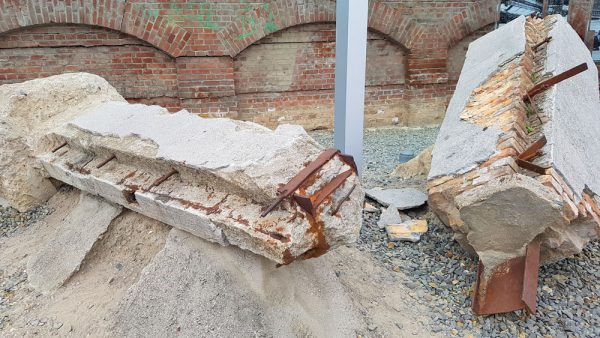 Chunks of the Berlin Wall

I walked the length of the 15 stations of the outdoor exhibit that covers a city block, reading the history markers. Today the wall separates, not brothers or friends, but the hectic pace of the city from the somber reflections of those standing in its shadow, considering the horrors of world war. 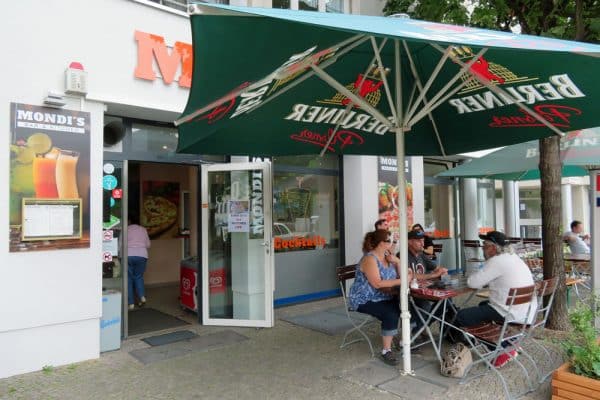 There were a few dining options near the museum, so we picked a sidewalk cafe — Mondi’s Bar & Kitchen. They’re not common in Saskatchewan, so we enjoyed sitting under the colorful umbrella watching the city life.

Mondi’s served pizza and pasta. The pizza options ranged from traditional tastes we’d find at home, such as salami or Hawaiian, to oriental or prosciutto — we selected the salami. While it had a few more “greens” on it than we’d expect at home, it was tasty. And of course, beer is the best thing to drink with pizza. 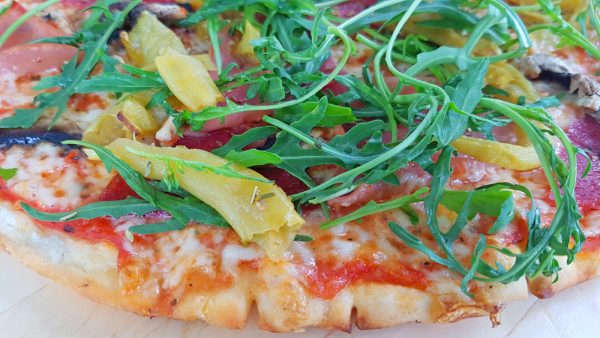 Pizza at Mondi’s in Berlin

After the pizza, it was time to explore the city on foot. We wandered through nearby Tiergarten, Berlin’s most popular inner city park to see the Soviet War Memorial. Read about our walk here.

The photo above of the Berlin Wall was taken by Linda Aksomitis.