Explore the Fishing Village of Morro Bay on the California Coast

Gibraltar of the Pacific - Morro Rock

Adventures in a seaside village on the California coast!
G
Mist rolled off the waters of the bay, shrouding the seaside fishing community of Morro Bay, as well as Morro Rock, the formation also known as the Gibraltar of the Pacific. About 23 million years old, the rock is all that remains of an ancient volcano.

The rock dominates the horizon, no matter where you are in Morro Bay. Likely, it was even more impressive nearly five centuries ago when explorer, Juan Rodríguez Cabrillo, named it. Cabrillo was a true adventurer of the seas, having battled the Aztecs and helped conquer Cuba for Spain, then mined for gold in Guatemala. 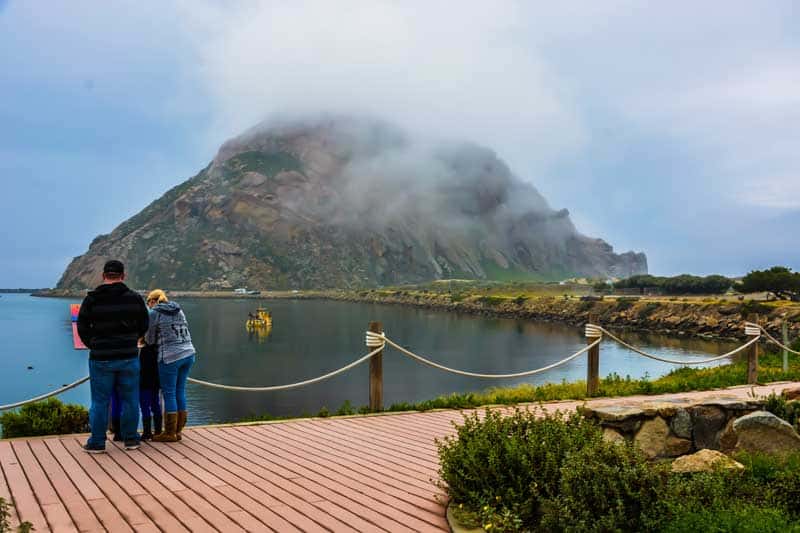 Morro Rock towers over the fishing village of Morro Bay on the California Coast.

While Cabrillo named Morro Rock (morro is a Spanish word meaning a crown shaped hill), it wasn’t until 1587 that Pedro Unamuno planted a cross on the bay and claimed it for King Philip of Spain. Later, beginning in 1821, the area was controlled by Mexico for 25 years, until it came under American rule in 1846. 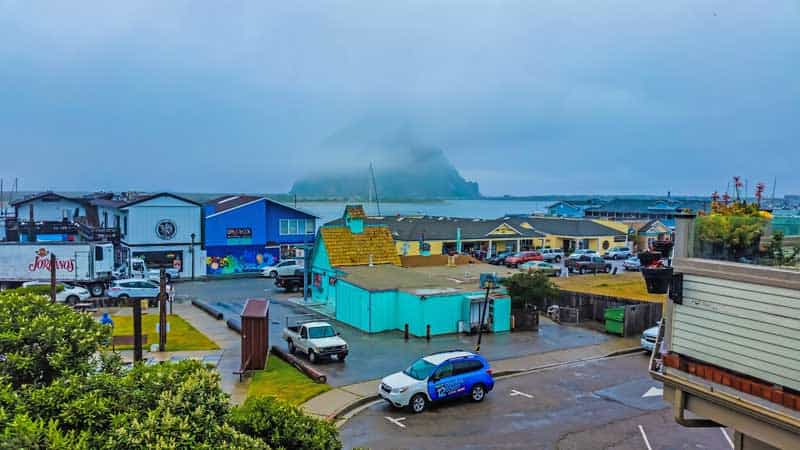 City of Morro Bay, California, houses and shore, with Morro Rock shrouded in mist in the distance.

The small city of Morro Bay, in San Luis Obispo County, spreads out along the coastline, making it the perfect seaside destination for those hot California summers — or cold Canadian winters (I visited in early April).

As I soon discovered, it’s a community meant for exploring. While I’m a walker, a separate paved path for two-way bike travel makes it more than family friendly for cyclists. The city streets also have an additional designated lane for one-way bike travel, so bikers can get anywhere easily.

I started out near the Visitor Center and followed the shore and bike trail towards the rock, which of course, I had to see up close. Since it’s a State Historic Landmark, it’s against the law to climb the 576 foot rock. The ban protects it from further damage, after decades of mining it for crushed stone. 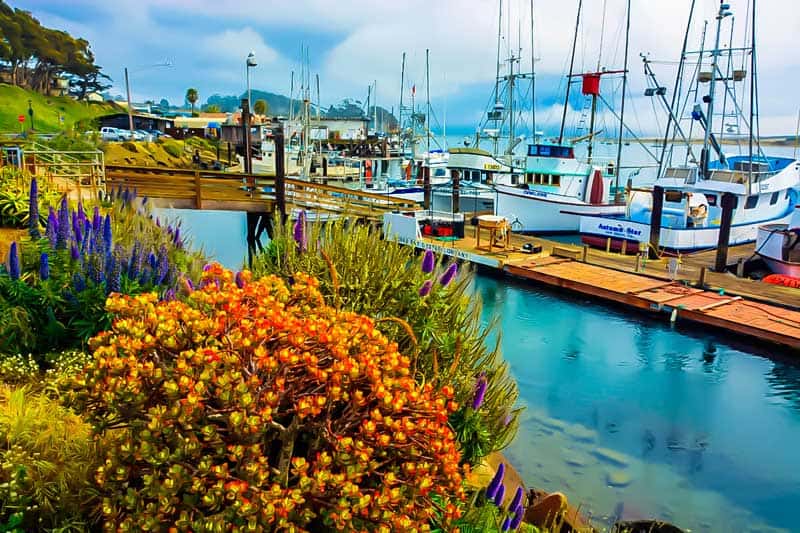 Boats in the marina along the shores of Morro Bay, California.

Various types of boats were anchored in the harbor. A number of shore birds hovered over them, especially the fishing boats. The keow, or ha-ha-ha-ha, announced the seagulls as they dove in to grab entrails fishermen tossed out as they finished cleaning up the morning’s catch. 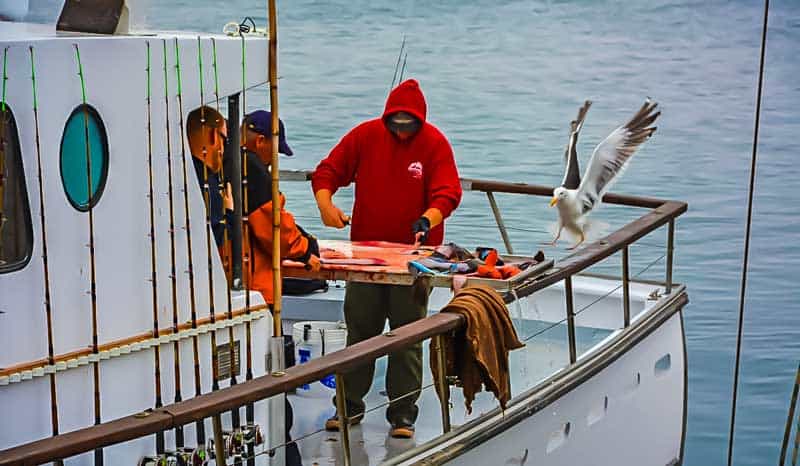 Brown pelicans, the only non-white pelicans in the world, hovered over the shore, along with sea gulls and cormorant and heron.

In fact, Morro Bay is a bird lover’s paradise! Every January, they host a winter bird festival. Over 200 birds are usually sighted, as it’s part of the Pacific Flyway. 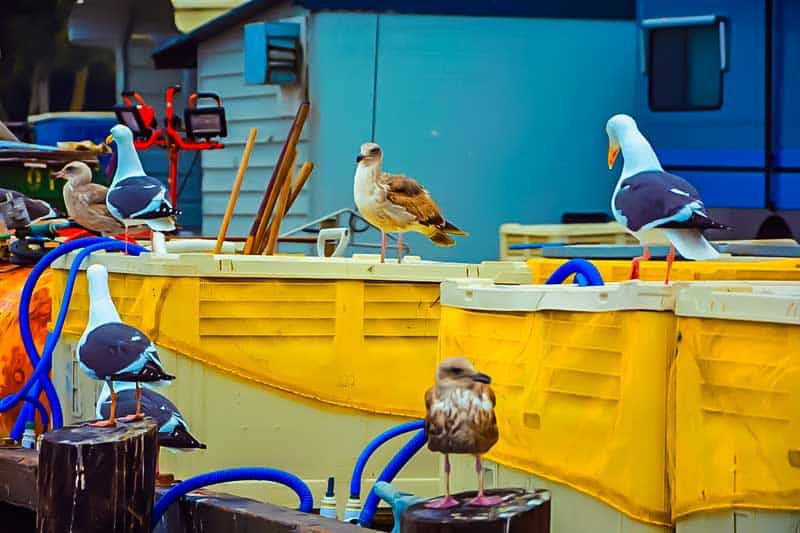 Different species of birds on a boat in Morro Bay, California.

As well as the birds, I soon discovered the sea lions — hearing their arf, arf, arf barking sounds well before I could see them on the docks.

Time slipped away while I watched the sea lions at play, diving into the water and popping up again. Between them and the birds, there was a constant contest for what the fishermen were throwing away! 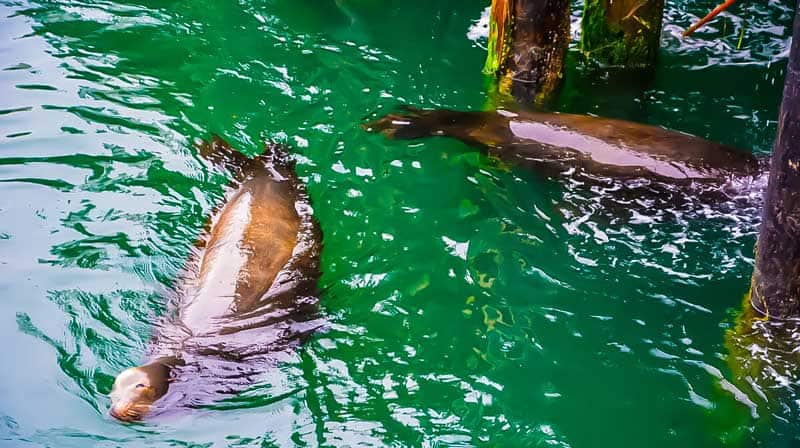 Sea lions on the dock at Morro Bay., California.

Stops Along the Seashore in Morro Bay 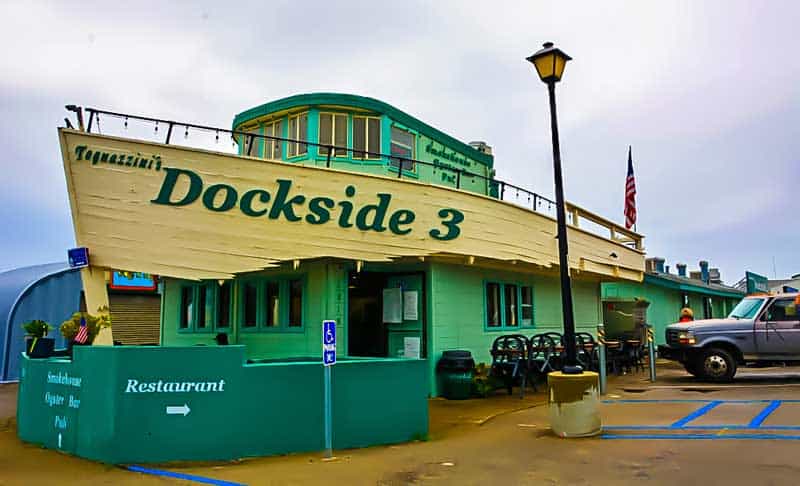 Dockside 3 Restaurant on the shore in Morro Bay, California.

Once the fishermen were done cleaning their catch for the day, the impromptu “show” on shore was over, and I continued my walk. Luckily, the sun occasionally popped out from under the clouds and the day brightened.

Tourism, of course, is one of the key industries of Morro Bay, or indeed, all of San Luis Obispo County. So, there are lots of neat places to stop and have a drink or something to eat. 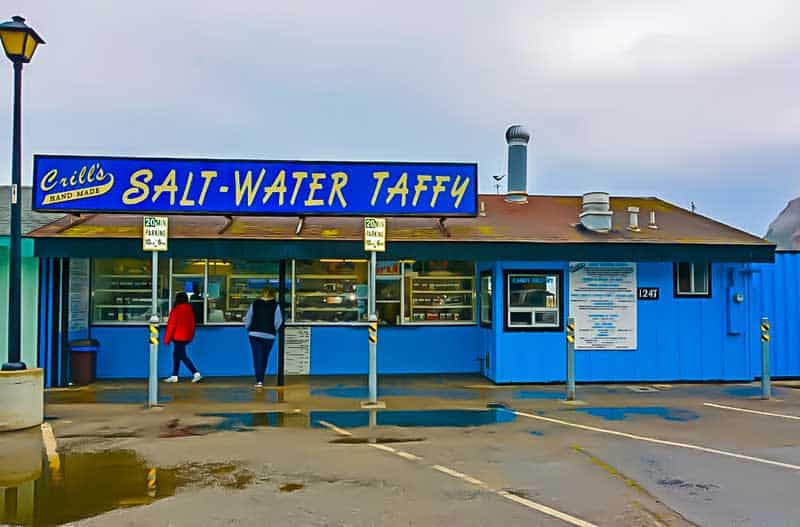 And of course, when you’re on the seashore, you have to try authentic salt water taffy! Crill’s sells it, along with delicious cinnamon buns.

If you’re taking advantage of one of the eight campgrounds and RV parks, you can also buy some of the day’s catch at Giovanni’s Fish Market and Galley. If you prefer, you can order online and have it delivered to you. 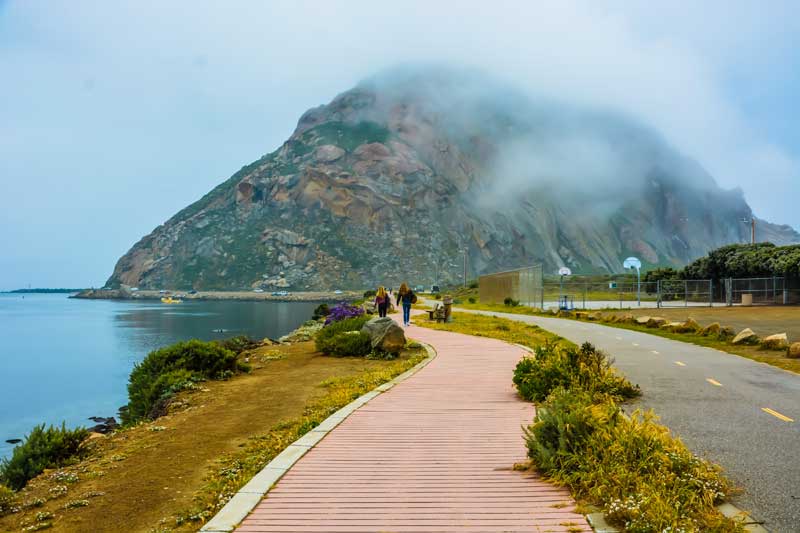 Boardwalk at Morro Bay, California, to explore the tidal flats and Morro Rock.

A new boardwalk, situated alongside the paved bicycle path, takes you right out to Morro Rock and the Ecological Reserve. It’s the perfect place to explore the estuary wildlife and get close to the tidal flats.

It was where I discovered the sea otters. At first, I thought I was watching more sea lions, however, in chatting with another traveler I discovered the differences between the two. The otters are smaller, and have as many hairs in one square inch of their bodies as we do on our whole bodies! The sea lions are more adapted with flippers for moving on docks and land, which was where I’d seen them.

You can get up close to all of the sealife if you take one of the whale watching or boat tours. Depending on the time of year, you’ll see everything from humpback whales to dolphins to porpoises, as well as the otters and lions. Squirrel on the rocks along the shore at Morro Bay, California.

While I never did get any photos of the otters, I got lots of pictures of the squirrels clambering over the rocks.

Morro Rock, when I reached it, was more impressive than it had been shrouded in mist. The sign at the base of the rock marked it as the Morro Rock Ecological Reserve. The reserve, established in 1969, protects the rare Peregrine Falcon that nests there in the rocks.

While I didn’t see any falcons, I felt in awe of the formation as I stood in the shadows of the rock.

Of course every seaside has its beach and Morro Bay is home to Morro Strand State Beach. It has various facilities, including a campground, beach area, fishing and horseback riding. 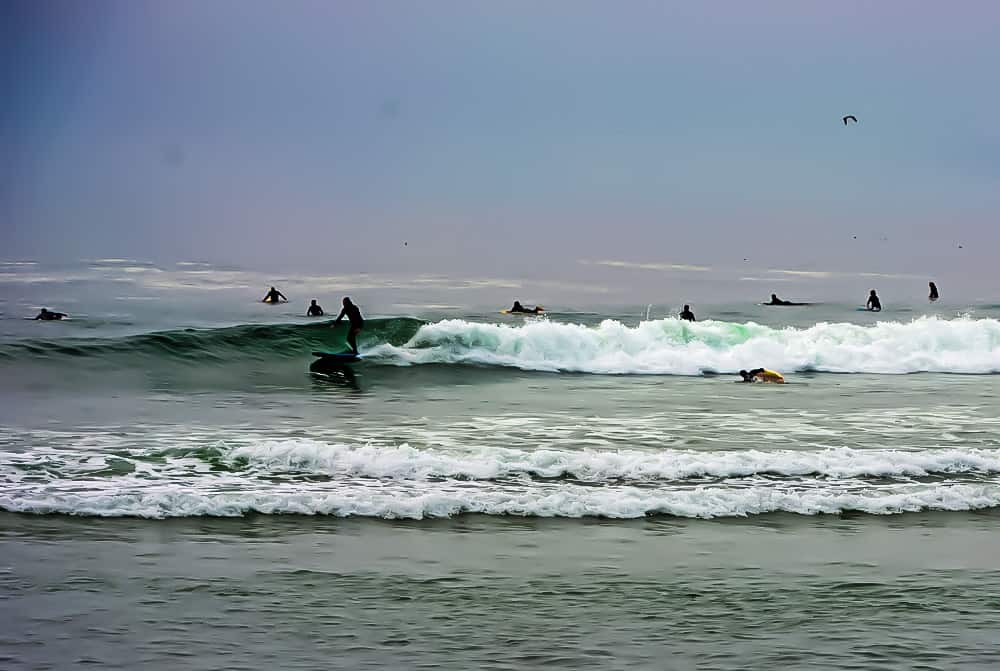 And — it’s also a popular spot for surfing. Since I’d grown up listening to the Beach Boys singing Surfin’ USA, seeing some surfing had been on my list of must-do things. I sink faster than a rock, so I didn’t dare give surfing a try, but sure enjoyed watching the dozens of surfers climb on their boards and catch some waves!

There are lots of options for your vacation in Morro Bay. With over two dozen inns and hotels, you can take your choice of chain hotels (Motel 6, Days Inn, Comfort Inn, Econo Lodge, and 3 Best Westerns), or smaller, cozier places to stay, such as La Roche Suites (3 rooms), Pleasant Inn Motel (10), or Beach Bungalow Inn and Suites (12).

I stayed in Morro Bay at the Ascot Suites (32 rooms), just a block from the water. It was a comfy room with a flowered interior reminiscent of all the romantic stories I’d read of seashore holidays. 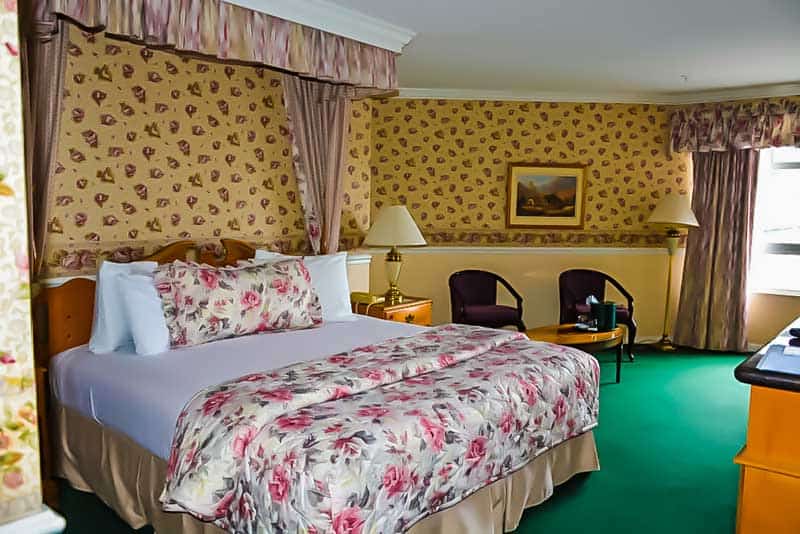 Room at the Ascot Suites in Morro Bay, California.

While it was tempting to nestle down to relax in my room after a day walking along the water, I took a dinner cruise with Chablis Cruises instead. Watching the sunset from the 50 foot, two story riverboat was the perfect end to an amazing day on the California coast — and dinner was darn good too!

I visited Morro Bay on a post trip after a NATJA (North American Travel Journalists) annual conference. My thanks to tourism in San Luis Obispo County for hosting my visit.

More Things to do in California

Top Activities and Sites for Nature Lovers in California

5 Places to Visit This Winter in California

When it comes to winter in California, you can choose from desert to top-notch skiing! Discover 5 amazing places to visit and things to do this winter.

There’s no better way to see San Francisco and enjoy its thriving microbrewery scene than with a bus tour.

Take an unforgettable hike through California’s giant forest at Trees of Mystery, in Klamath, or an adventure ride on the gondola Sky Trail through the treetops.

Halter Ranch Winery, California, offers visitors lots of experiences, from an Excursion tour through the vineyards to a barrel cave tour to wine tasting.

Ronald Reagan, 40th president of the United States, was America's oldest president, and some might say brought one of the most colorful personal histories to the White House. Indeed, acting in 50+ films, over nearly three decades, seems an unlikely career choice for...
Read More

Avenue of the Giants — Sounds of Silence in the Redwood Forest

The photo in the header above was taken in Morro Bay, California (USA), of Morro Rock. 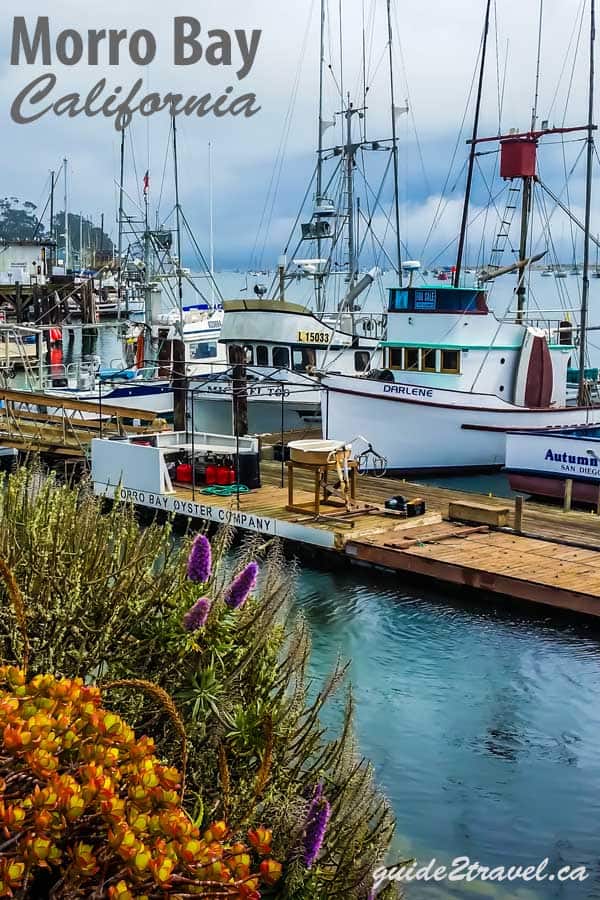 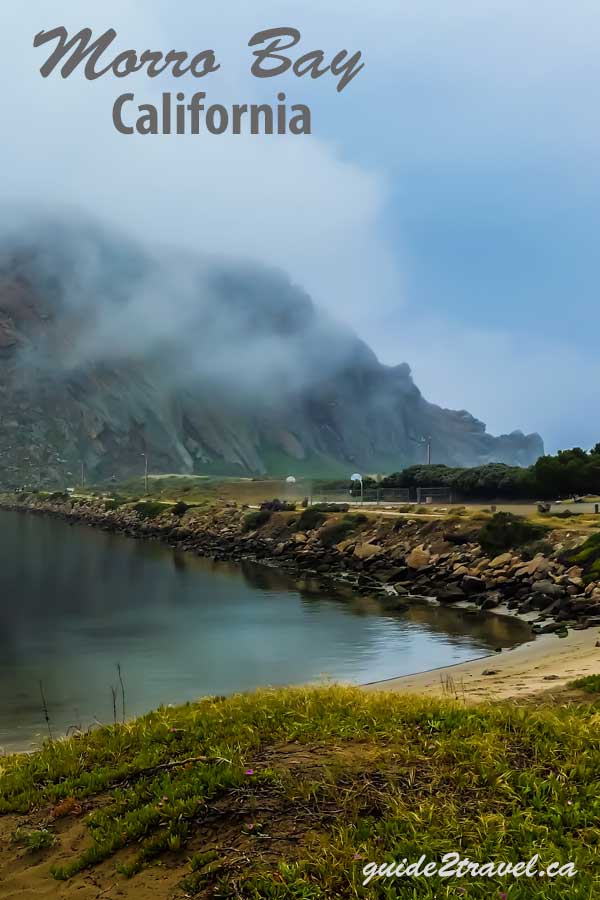 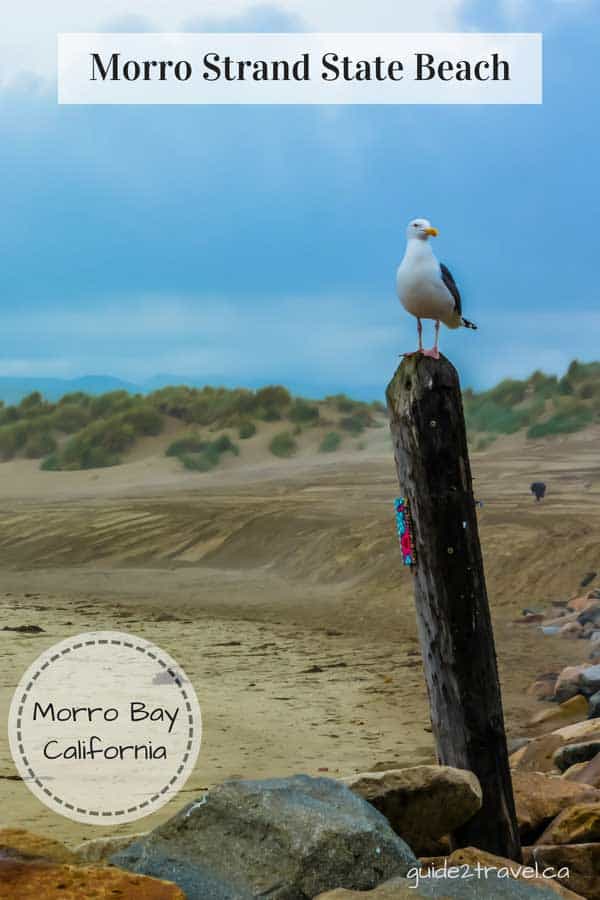