Every Valentine’s Day new lists of the most romantic cities are released — in 2017, the Independent, one of London’s online newspapers, named Amsterdam as possibly Europe’s most romantic city.

And when I started thinking about romance, I had to agree that Amsterdam definitely has what it takes to make the mood! 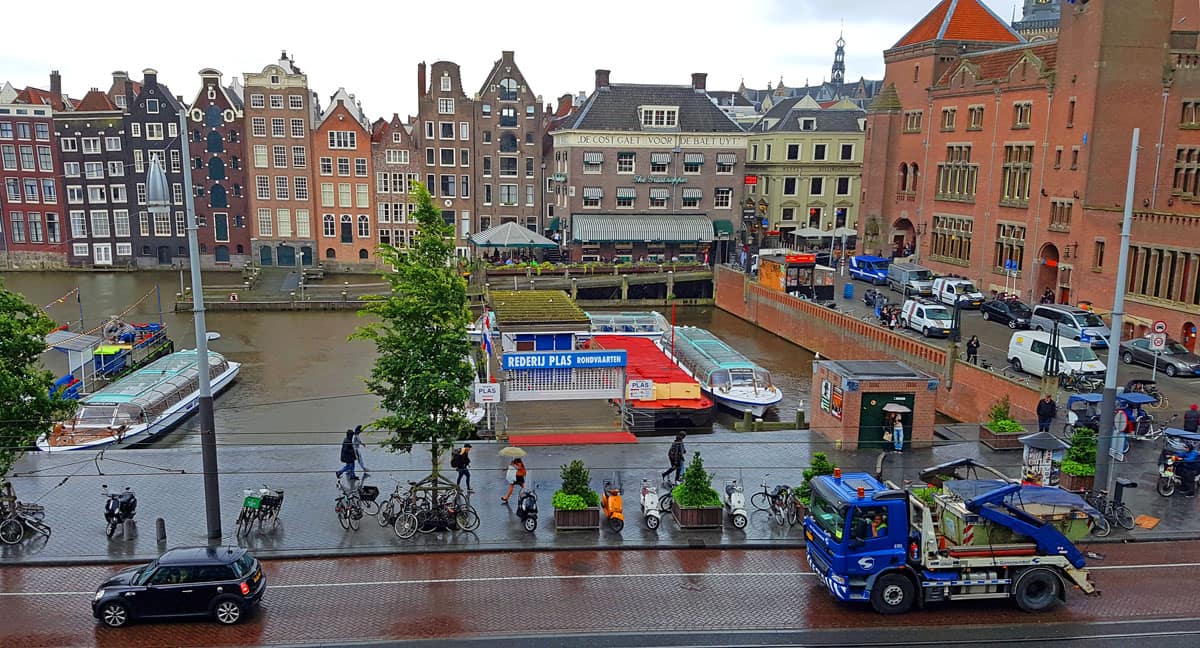 Canal on Damrak Street – view from my hotel room

In fact, you’ll find Amsterdam is the perfect city to explore walking hand-in-hand (well, except for the side streets where sidewalks are basically replaced with an 18″ wide brick path).

I like to stay in the middle of where everything is happening, and the Orange Tulip definitely provides that as you’re in the medieval Old Centre part of the city. Smack dab in the middle of Damrak Street, it’s only 500 meters from both Central Station and Dam Square, and only 300 m to the Red Light District and Kalverstraat shopping street. With only two nights to spend before we took the train to our next European capital city, Berlin, the location meant we could see it all. 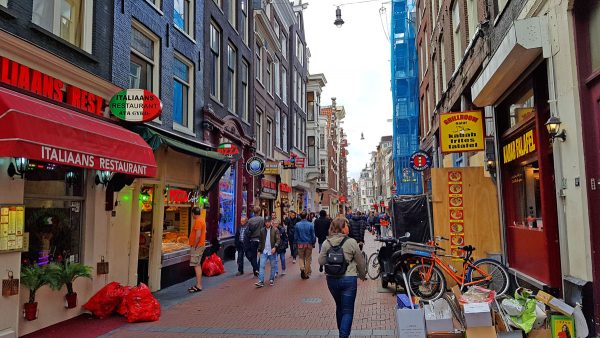 Businesses on streets in Old in the Old Centre of Amsterdam.

The architecture of the medieval Old Centre is fascinating. Buildings stand pushed together in long rows like children’s blocks stacked somewhat at a slant. That’s readily explained by the goo the houses were built upon centuries ago — today they use cement piles around 18 meters deep, but in those days, everything was built of wood, even the foundations.

And wooden piles deteriorate, thus the houses lean to one side. But the buidings also lean out toward the street on purpose. In fact, until the 19th centuries, ‘op de vlucht bouwen’ was a required building code! 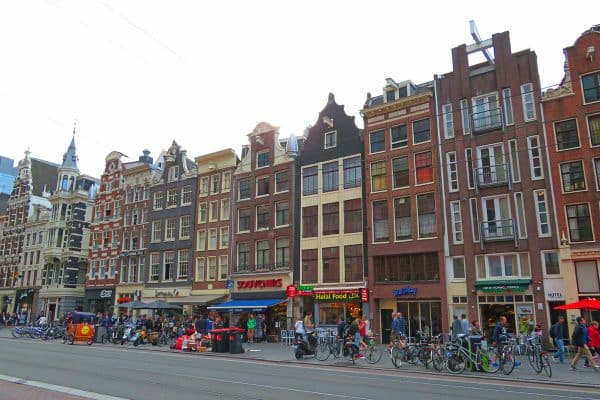 We also discovered one other anomaly: houses and businesses have a hook in the peak that leans out over the sidewalk. And if you ever make your way up the stairs inside an old building, like the Orange Tulip Hotel, you’ll understand why! The hook is used to move furniture in and out of the houses, without dragging it up and down narrow staircases.

And if walking isn’t your thing, romantic duos can certainly join the throngs of cyclists (mostly bicycles, but some motorcycles) to explore the city on wheels. 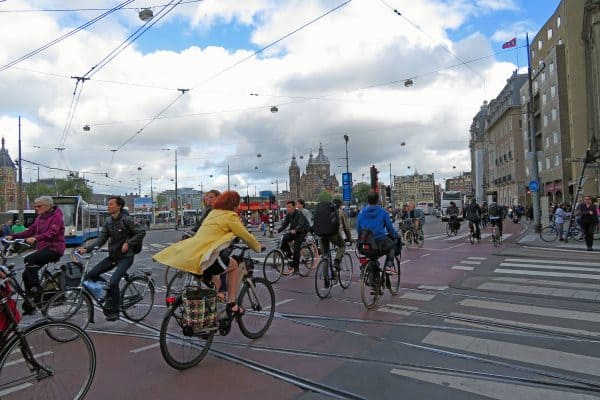 You’ll find lots of options for renting bicycles. Click here for some ideas.

There’s no worry about where to park your bike while you’re taking in other attractions either, as there are enormous parkades and parking areas everywhere.

Nor do you have to worry about traffic, as it seemed to me that bicycles had the right-of-way. In fact, as somebody who prefers walking to riding, we had to learn to keep clear of the many bicycle lanes or get mowed down! 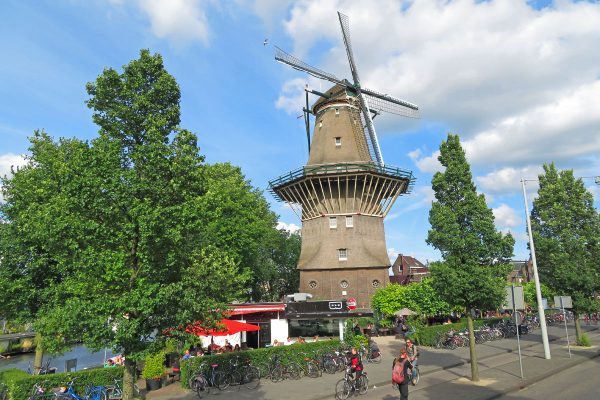 One of 8 windmills in Amsterdam.

If you and your honey love to cycle, you’ll really enjoy Amsterdam, which is often called the bicycle capital of the world. 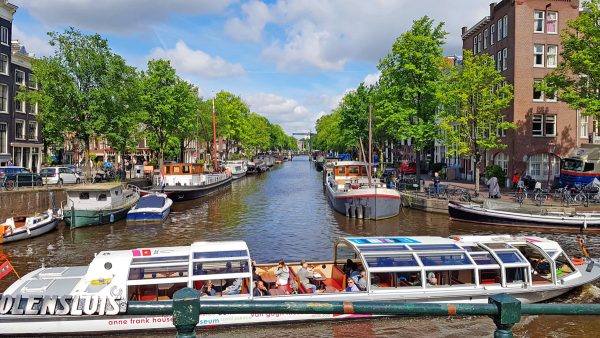 Cities like Venice often make the lists of most romantic due to their canals — and Amsterdam has miles of them. In fact, it actually has more than double the miles of canals (60 miles) as Venice (26).

Amsterdam is a city of canals built outward in a maze that was designed to move goods and people through the city in the 1500s and 1600s, its golden age. In 2010, three of these canals, which together form the Amsterdam canal belt, were added to the UNESCO list of World Heritage Sites.

Of course, the canals also have a lot of bridges for pedestrians and bicycles and sometimes, motor traffic, to cross back and forth.  With 1753 main bridges and 2250+ non-numbered bridges, that’s a lot of places to stand and watch the moon rise over the water on a romantic evening! 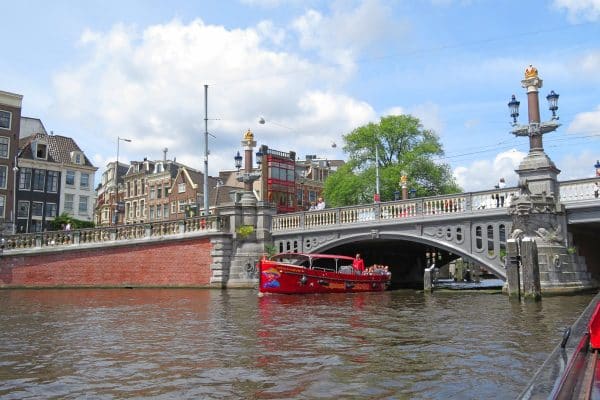 One of Amsterdam’s around 4000 bridges.

We bought tickets on the hop-on-hop off boat and bus tours to see everything in our short period of time. However, the canal ride was much more informative and enjoyable. The bus tour basically went around the outside of the city’s Old Centre, which did give us a view of the modern aspects of the city. If you only have time for one or want to save a little money, skip the bus. 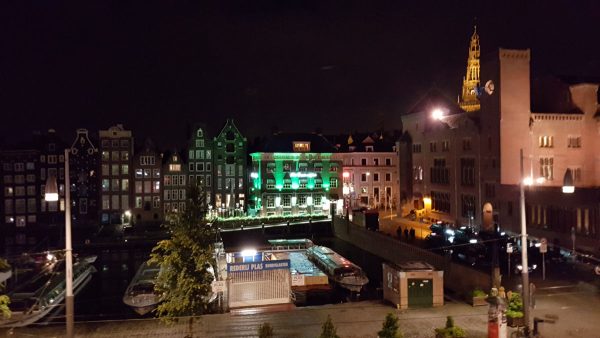 When it comes to romance, two of the top contenders for creating a mood are wine and chocolate. And there’s no shortage of either in Amsterdam!

While countries around the Netherlands may have bigger reputations for their chocolate, aficionados claim Amsterdam has some of the best artisanal chocolatiers on the continent.

For some, the most enticing thing about chocolate in Amsterdam is that you can buy it with a special ingredient — marijuana. If your sweetie fancies a little bit of a mood enhancement for Valentines, you can even find it mixed with gourmet dining in Amsterdam.

For those on a budget, marijuana is easy to buy mixed with everything from cookies to ice cream to chocolate in shops in the Old Centre of the city. However, make sure to find out the rules before you buy. Unless you’ve got a tolerance for the smoke, skip the famous Amsterdam Coffee Shops, or your evening may end with a headache rather than romance.

Wine, of course, is available everywhere with your evening dining, but here’s a list of 15 best places for red wine in Amsterdam.

Whether you’re looking for a romantic evening on Valentine’s Day, or in July, as I did, you’re sure to find it in Amsterdam.