Portland, Oregon
Pretty may be too mundane of a word to describe Portland, Oregon, with its more than 11,000 acres in its Parks & Recreation system, but pretty it is. A city of green spaces, you’ll find bigleaf maples, red alders, and Oregon white oaks, along with evergreens like the grand fir and Western red cedar in this eco-friendly destination.

It’s no surprise with so much natural landscape that residents and visitors alike all enjoy the outdoors here, with more than 150 walking and biking trails. In fact, Portland is ranked #2 in the U.S. for cities with an active lifestyle. 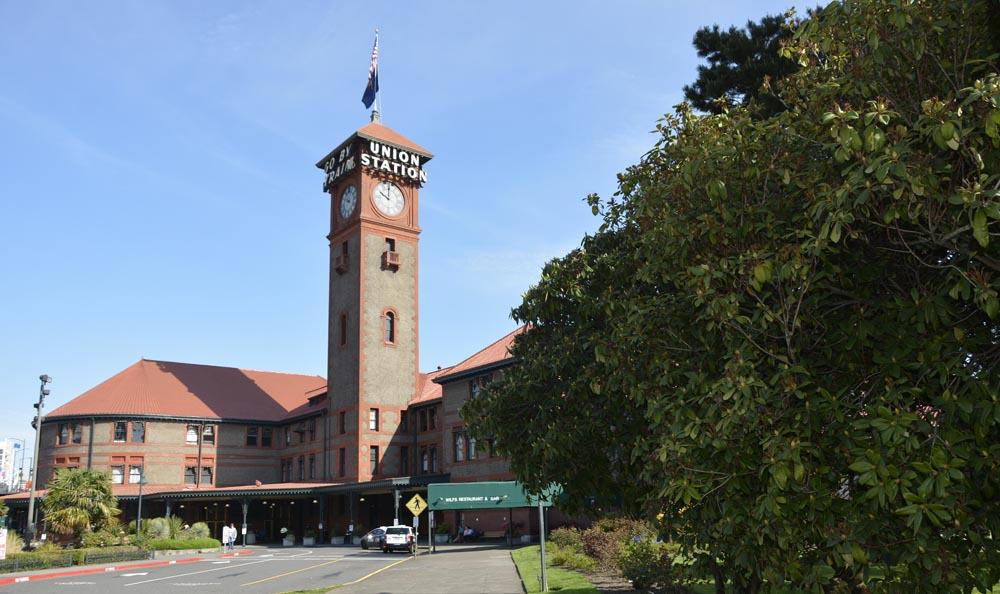 My walking tour of Portland began with my arrival at Portland’s Union Station on the AMTRAK Empire Builder Train from Williston, North Dakota. I had a half-day layover before boarding the Coast Starlight Train to Oxnard, California.

Portland’s Station had come as somewhat of a surprise — early developers’ visions of what Portland could become, back in 1896 when the station was built, had certainly come to fruition. Towering above the Romanesque and Queen Anne architecture, the 150-foot clock tower looked as impressive today, with its four-sided Seth Thomas clock, as it must have when the station opened more than a century ago.

The station was added to the National Register of Historic Places in 1975.

The Green Man of Portland 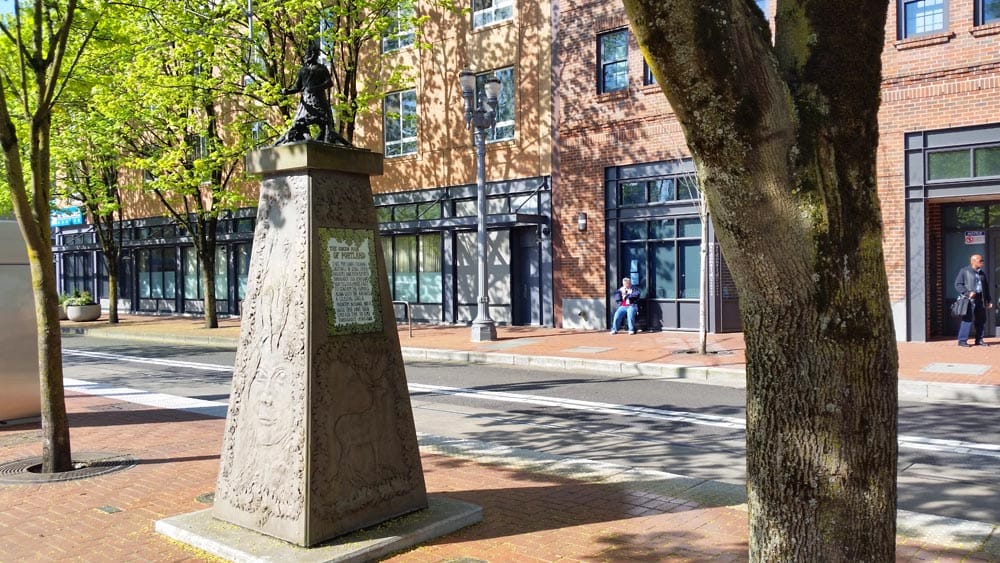 The Green Man legend encompasses all the varied, transitory communities that call Old Town and China-town home in Portland, Oregon.

Leaving Union Station, I walked down 6th Ave, which soon brought me face to face with the statue of the Green Man. Statues and their signs, I’ve found, are usually good places to start identifying the important historical points of a community. Not so with the green man. 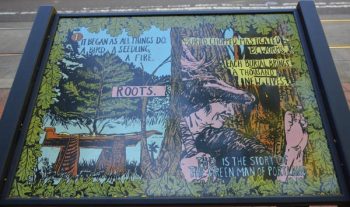 It began as all things do — the first comic story marker of the Green Man legend in Portland, Oregon.

The green man, I eventually discovered, is a fake legend created by Daniel Duford as part of the Portland Mall Public Art program. Twelve sculptures were created in 1977 for the original transit mall. Over the years, themed public art was added along the transit hub, which spans more than 57 blocks along 5th and 6th avenues. Union Station is its northern end.

But anyway, back to the “legend” of the green man. It revolves around several central elements: small green archers, a celestial stag, a phantom building called the “Greenwood,” and a huge tree — green, of course. The Green Man’s arrows pierce the secret history of Portland, which is told through eight “historic” comic story markers along the mall.

I came to the statue of the green man first, and was kind of lost when I read the marker. However, as I wandered and discovered the rest of the markers with their poems, I started to piece together the lore that DuFord says he hopes “the Green Man of Portland will quietly twine itself into the fabric and many-layered history of the community.”

Union Station is near the west shore of the Willamette River in Portland’s Old Town, so there were lots of things to see as I continued down the avenue.

Old Town is Portland’s original downtown. The Saturday Market and Skidmore District are just two of the many things going on in this revitalized part of the city. Created in 1975, Old Town was declared a National Historic Landmark in 1977.

Like many old waterfront districts, Old Town had deteriorated into a “skid row” over the years, until a concentrated effort was made to buy and restore some of the old buildings.

Now, Dan and Louis Oyster Bar, a century-old family-run seafood restaurant, is one of the most popular eating spots in Old Town. The Voodoo Doughnut is also popular with locals and visitors alike for its atmosphere as well as its tasty sweet treats. 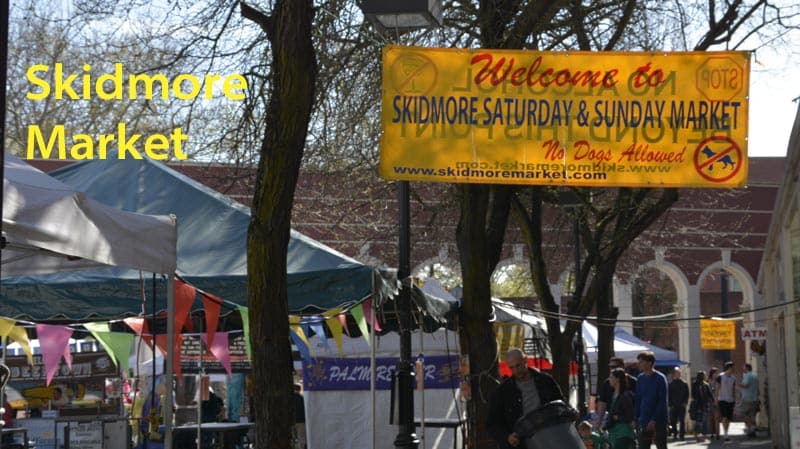 Food booth at the Skidmore Market in Portland.

The Skidmore Market gets its name from the Skidmore Fountain, erected in 1888 to provide drinking water for men, horses, dogs, and well, anyone making their way through the busy street that was central to the business district. Stephen J. Skidmore had bequeathed $5000 to build it. His business partner and friends donated an additional $18,000 to finish the project.

I spent a lot of time in the mini outdoor shopping mall in tents, checking out the many handcrafted imports for sale, along with food and drinks from vendors. 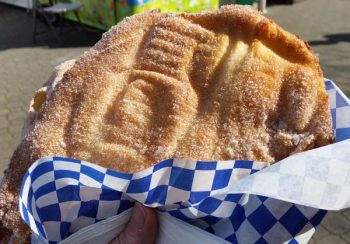 Elephant ears at food booth at the Skidmore Market in Portland.

The market had a fair-like atmosphere, and if there’s one thing you have to do at the fair, it’s eat. So, I looked around for something different to try — and readily found it in a tasty treat called Elephant Ears. And what are elephant ears? Well, they’re a large elephant ear shaped piece of sweet dough that’s deep fried and dipped in cinnamon and sugar while it’s still hot. It was delicious! So was the Pear-Blackberry cider I bought to go with it.

One of the most interesting surprises I found at the market was the row of ornate, cast iron pillars that lined the street (pictured at the top of the page). In fact, I discovered that Portland has the second largest collection of cast-iron architecture in the U.S. Only New York City’s historic Soho District has more of these beautiful buildings.

Iron had been popular in the mid to late 1800s throughtout America. During that period, around 180 of the 200 brick commercial structures built in Portland had used cast iron structurally or decoratively. I could only imagine how beautiful a walk through the business district, alongside the Willamette River, in the shadow of all those elegant buildings with their columns and pillars and bracketed cornices would have been. 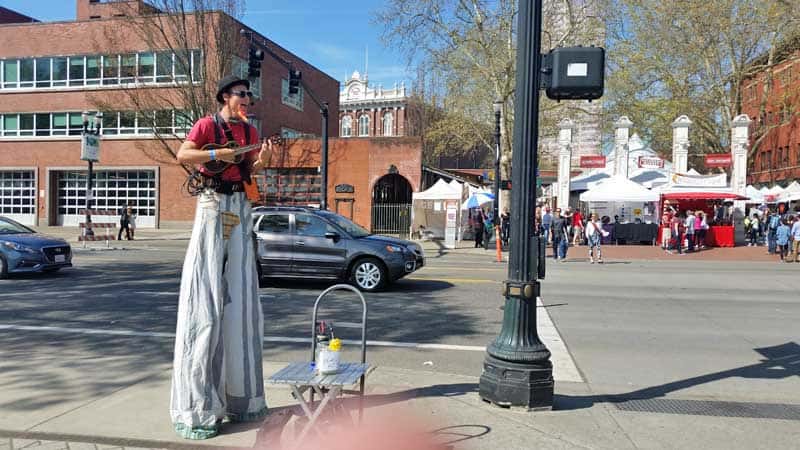 Entertainer on stilts at the Portland Saturday Market.

From the Skidmore Market, I crossed the light rail tracks to the Waterfront Park and Portland Saturday Market, to discover hundreds of people out enjoying the amazing day. There was so much going on, I just sat and watched for awhile. My favorites? The musician on stilts and the young man tying balloons into animal shapes for the kids.

I must admit I also did some shopping here, as it’s a juried handcrafted market. One thing I always have trouble finding is a hat that truly “speaks” to me, but I did here — an amazing hot pink one that I’ve worn ever since!

From the cherry trees blooming in March to the pair of golden lions that flank the ornate gates on N.W. Fourth Avenue, Portland’s Chinatown has lots to see. While I only had time for a very quick walk through part of the area, I’d have loved to visit the Shanghai Tunnels — Chinatown’s underground passages.

A century and a half ago, it seems that Portland was referred to as the Forbidden City of the West. Since Portland was on the waterfront, sailors were always in need. Not all of them went voluntarily, though, but were taken from downtown bars into the tunnels, never to return. Indeed, as legend has it, shanghaiing (capturing and selling men to sea captains) happened here for nearly a century, from 1850 to 1941. 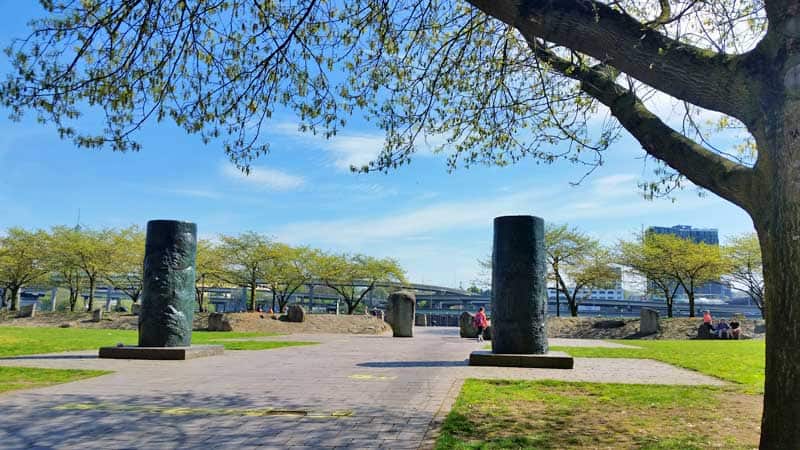 Entrance to the Japanese American Plaza in Portland, Oregon.

Japantown was also located in the Old Town. Many Japanese had arrived in Portland at the end of the 19th century, working as cheap laborers when the immigration of Chinese workers was stopped in the U.S. by the Chinese Exclusion Act of 1882. As the Japanese community grew, family businesses opened to serve the growing needs. Prejudice against the Japanese increased along with the size of the community, and they were added to Exclusion Act in 1924. During World War II, this distrust resulted in the 1924 President Franklin D. Roosevelt Executive Order 9066, which ordered the Japanese into confinement.

The Japanese American Historical Plaza uses art and poetry to tell the story of their confinement in 10 Oregon internment camps for Japanese people during WWII. Dedicated in 1990, the plaza has received Waterfront Center’s Top International Award, two national awards, one state award, and four Metropolitan awards. 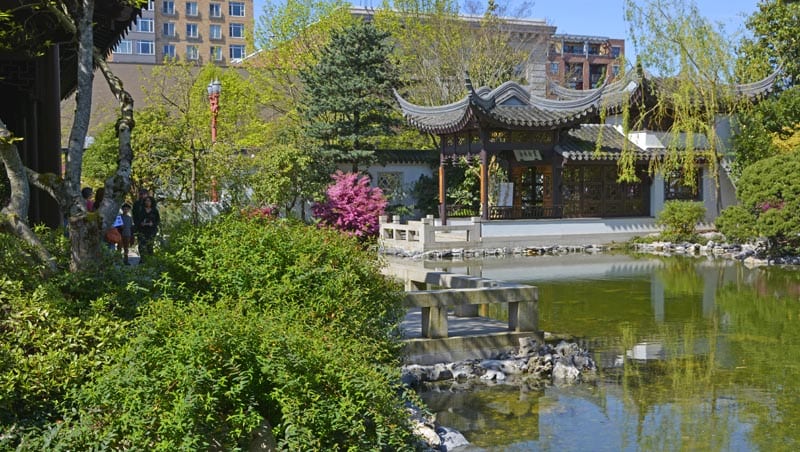 Lan Su Chinese Garden was the last stop on my walking tour of Portland’s Old Town area. And, it was certainly one of the most beautiful stops of the day!

The gardens are much more than blooming flowers, though, as they bring 2000 year-old Chinese traditions of art and architecture together to create a moment of serenity. While skyscrapers a few blocks away towered above the garden’s walls, inside the walls the gurgling water and the blended fragrances of dozens of flowers seemed to shroud them in a cloak of invisibility.

Covering a whole city block, the gardens are approximately 40,000 square feet, so there’s a lot to see inside! It was the only admission charge I paid during the day, and the $8.50 was worth every penny.

My stopover in Portland, Oregon, was part of a complimentary AMTRAK trip to the NATJA travel writer’s conference in Oxnard, California.

More Things to Do in Oregon

Umpqua Lighthouse State Park is one of Oregon’s most popular parks. It’s in Oregon Dunes National Recreation Area, which has great hiking and watersports, plus access for motorized vehicles like quads and dirt bikes.

The photo in the header above was taken at the Market in Portland, Oregon, USA. 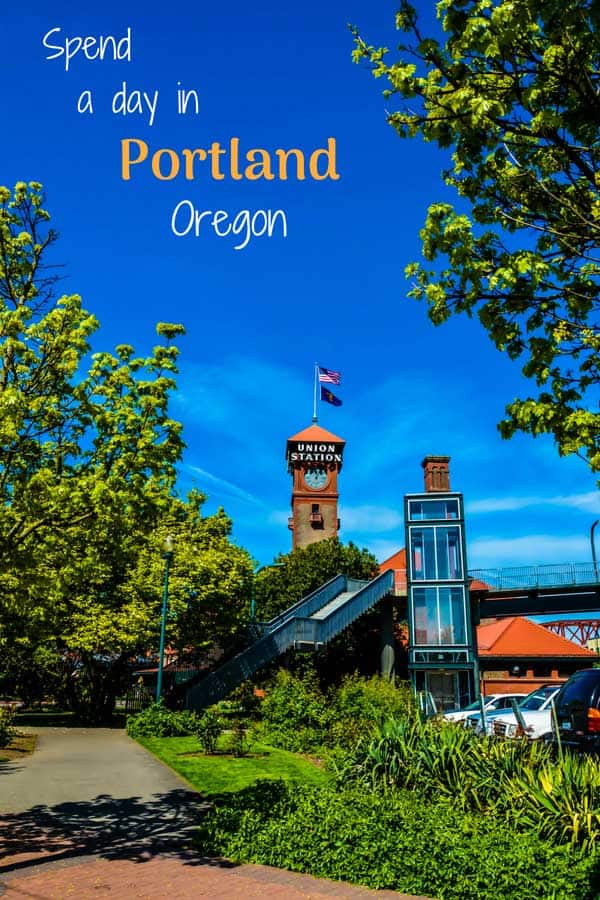 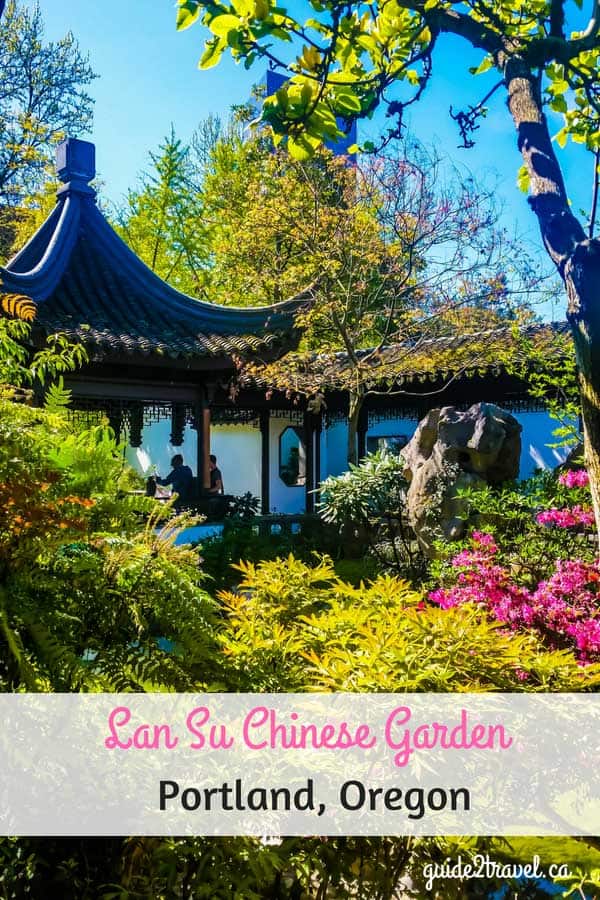 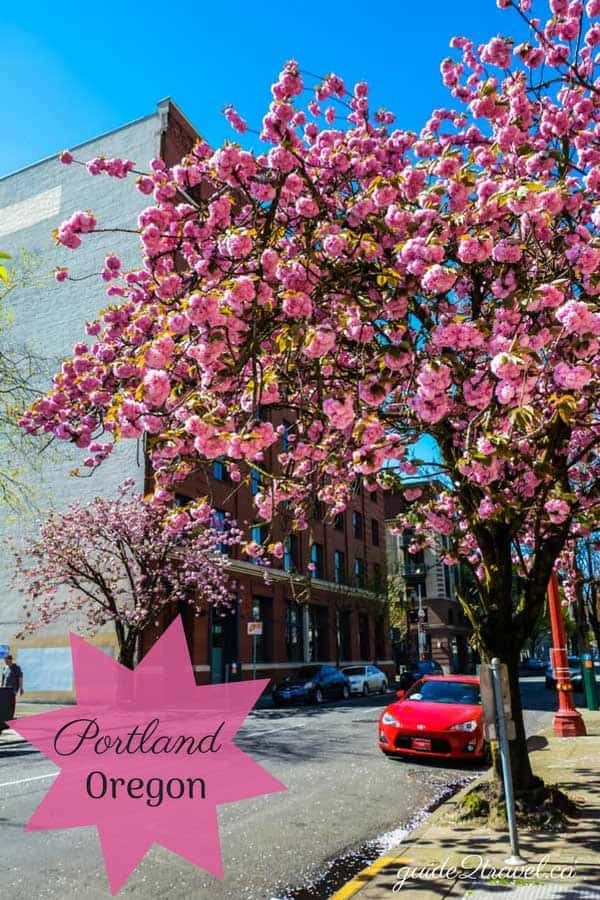