Casino Regina is one of Western Canada’s premier weekend destinations for grown-ups. In addition to traditional casino options, it’s also home to one of Regina, Saskatchewan’s, most popular entertainment venues with the Casino Regina Show Lounge.

Re-imagined and opened in 1995 as a casino, the building that’s home to Casino Regina has long been a thriving hub in the Queen City. It started life in 1911 as Union Station, built to replace the separate stations used by the Canadian Northern Railway (later Canadian National) and Canadian Pacific Railway (CPR) with a single impressive facility.

The Station was indeed impressive, with three floors that held spacious waiting rooms, lavatories, smoking rooms, and separate ticketing offices for the two rail lines. It continued to grow with several additions including the 1931 expansion that created the grand concourse that we see today. 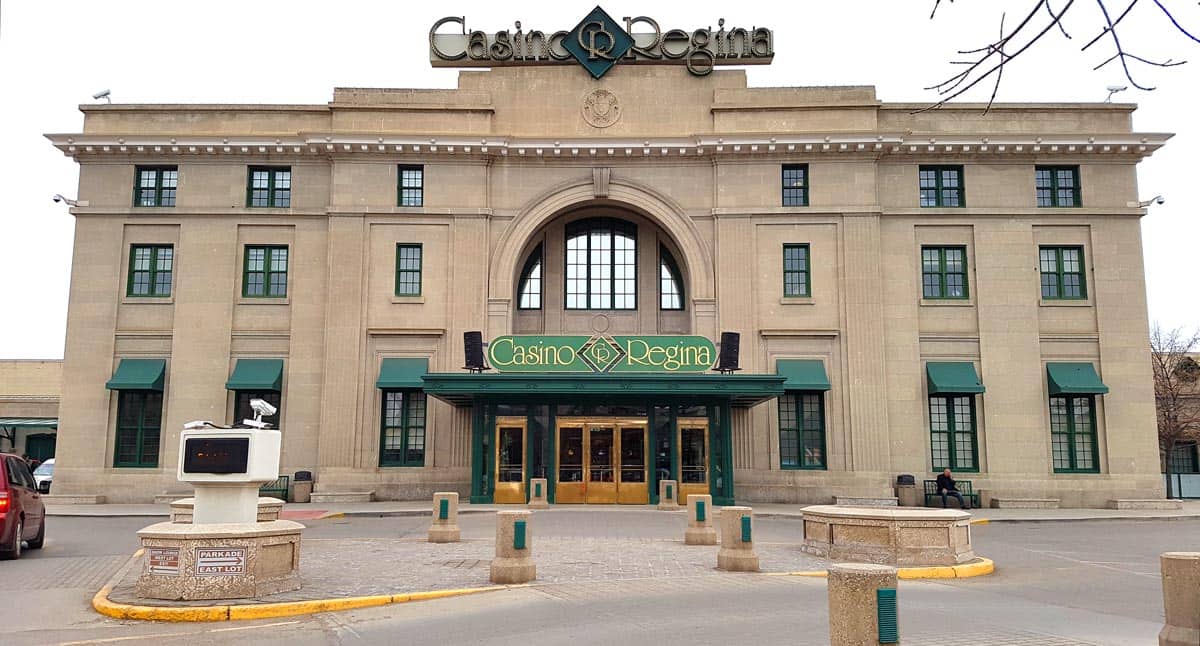 The Casino Regina Las Vegas style show lounge has three tiers of table seating in front of the stage. If you nab tickets there, you’ll have a waitress throughout the performance, as well as being able to get up and dance in front of the stage if your feet just can’t keep still.

I wasn’t so lucky on my last visit, and ended up at the very top of the balcony seating. It was surprisingly good, though, with great sound and a clear view of the stage (Well, it would have been clear except for the two buoyant fans in front of us!). And as a bonus, our seats were right in front of the bar and close to restroom facilities.

My favorite? Night Fever, although Abba Mania also had a good performance. 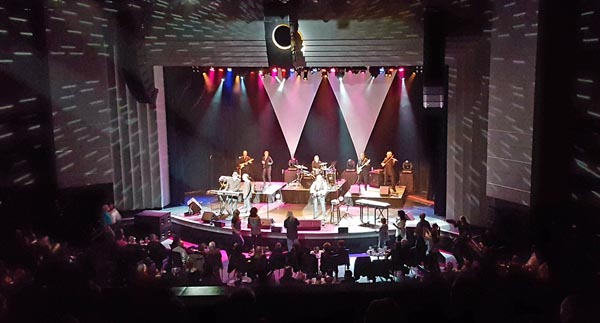 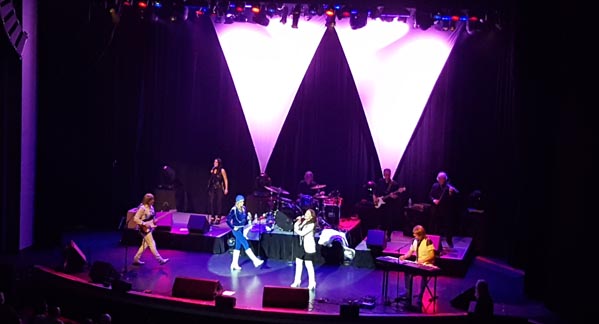 Gaming in the Casino

The casino spreads throughout the building, from the Last Spike Dining Room at the East end (nearest to Broad Street), to the Show Lounge at the West end. Since every show ticket comes with a $5 gaming voucher, my group spent some time after the performance testing our luck.

And we were very lucky!

We soon discovered that the catch to the free $5 for the machines was that you needed to have a player card to use it — only one of us did. So, we did the logical thing, signed in with her gaming card and fed our $5 vouchers into the penny feeding machine set to full bet. Then we played.

One after another, we took turns pushing the big silver button to spin the wheels. Contrary to expectations, we soon had the bells and whistles of a winner attracting the attention of all the other players. And they kept going as we’d won 15 free spins. Wow. We were on a roll and kept hitting the button to give it another try. After all, we were only playing with free pennies.

Pennies can add up though. Eventually somebody realized those numbers actually represented real money and hit the cashout button on our behalf — and we walked away with $140 for our ten minutes of fun. 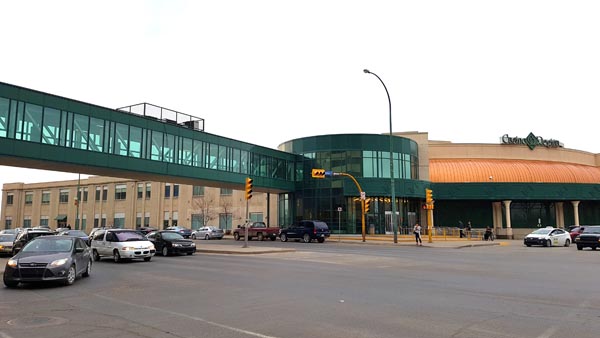 The Show Lounge at Casino Regina connects to Southern Saskatchewan’s largest shopping mall, the Cornwall Centre, by a skyway over Saskatchewan Drive. With 90+ stores, it’s a popular destination for weekend getaways.

In 1988, the Queen City started a project to rejuvenate its downtown, and the mall was one of the main attractions included in the design. Sears and The Bay are the anchor stores, but there are plenty of other popular stores such as the Gap and Gap Kids, lululemon, La Senza, and more. (Click here for the directory.)

I’d made time for a power walk through the mall before the show on my visit. It turned out to be good timing, as there were lots of 30%, 40%, and 50% off sales, so I could get some good deals on my retail therapy afternoon.

One of my favorite parts of the mall is how they enclosed this historic front of The Canadian Bank of Commerce into the decor. 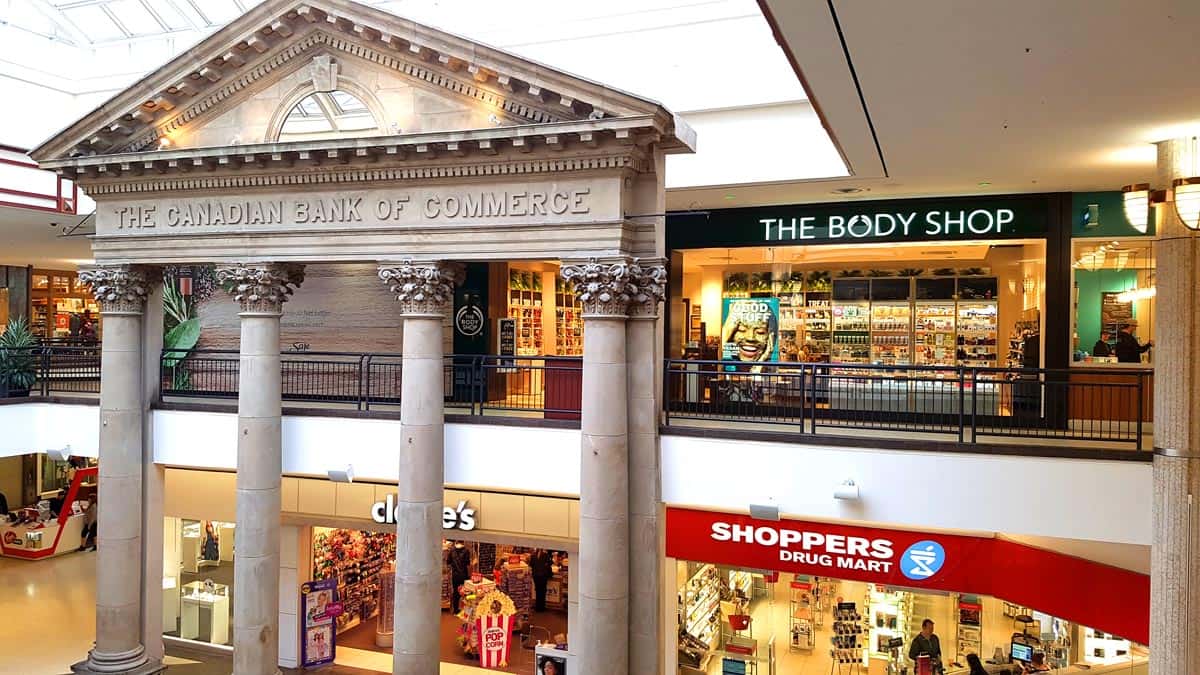 Planning Your Trip to Regina

There are a number of good hotels in downtown Regina. The Delta Hotel is part of the complex, along with the Convention Centre. If you’d like something more historical, the Hotel Saskatchewan may be just the place to spend a romantic weekend with someone special. Indeed, a lot of special people have stayed there, including Queen Elizabeth II and Prince Philip, Liberace, Red Skelton (now that’s a blast from the past, isn’t it!), the Rolling Stones and Justin Beiber.

I love getting downtown for some fine dining and to relax with friends in one of the pubs. If it’s a pub and light meal you’re interested in, my favorite spot is the Fat Badger. Its advantage is that it’s right in the middle of the Scarth Street Mall, so you can wander through the shops or even take in a production of the Globe Theatre, as that’s all right across the street.

And for fine dining, the Hotel Saskatchewan has an amazing lunch buffet at the Circa 27 Restaurant. Evenings, we usually opt for the Saskatchewan specialty — steak or prime rib — at Golf’s Steakhouse.

If you’ve visited downtown Regina, and have suggestions, let us know in the comments!