It takes just over 1000 miles (1665 km) to explore Western Canada’s best 8 open air museums — a trip that takes you as far back in time as the fur trade’s historic forts, right through to the threshing machines that made Saskatchewan the bread basket of the world. From the voyageurs who paddled the rivers, to the English aristocrats and their fox hunts, to the sod huts of Canada’s oldest Ukrainian settlement, you’ll find the story of the prairies in these museums.

Let’s start our journey through time and place in Manitoba, at the Lower Fort Garry National Historic Site. (See map at the bottom of the page) 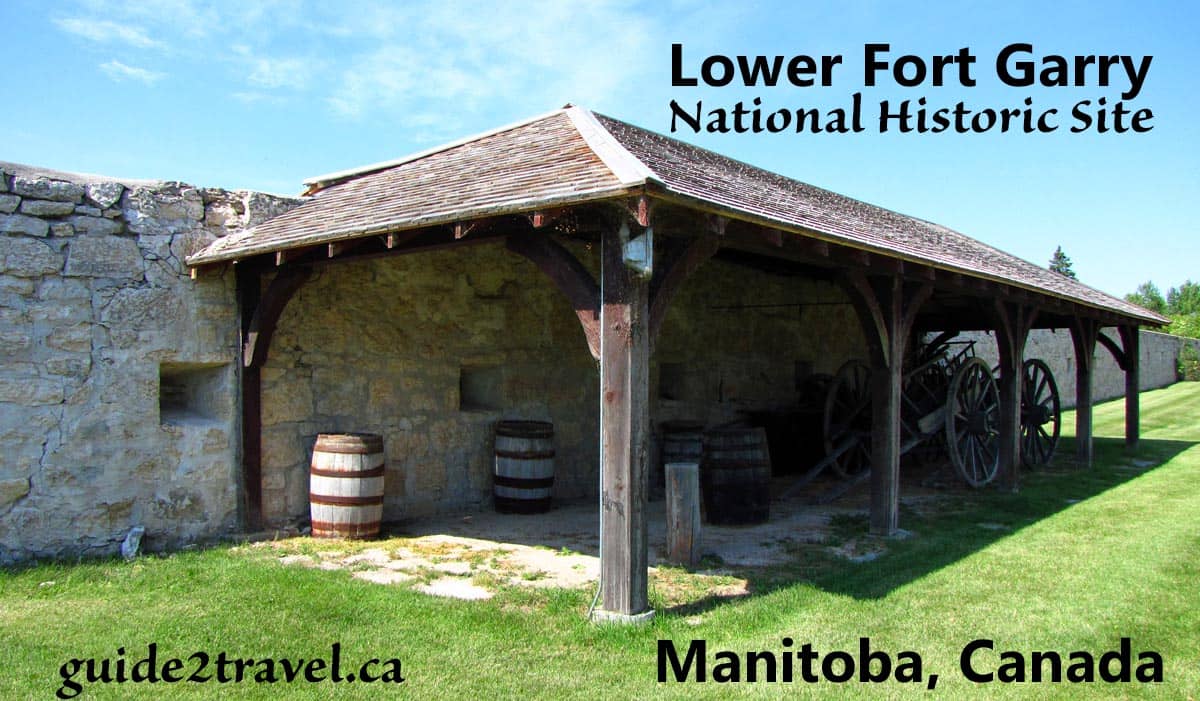 The Hudson’s Bay Company was formed in 1670 by England — its purpose — exercise exclusive trading rights on all the rivers that flowed into Hudson’s Bay from five Canadian provinces (with a watershed of over 1.5 million square miles). The stream of adventurers traversed all of the North, eventually building Lower Fort Garry on the Western bank of the Red River in 1830. Today, nearly two centuries later, the Fort is a National Historic Site situated just 20 miles (32 km) from Manitoba’s capital city, Winnipeg.

You don’t have to imagine what life was like in the Fort either, as there are costumed interpreters who step into their roles with the ease of professional stage players. Sixteen areas take you through various activities of a day in the Fort, starting from the docking area where the York boat brigades left to trade for furs every June, to the only original wooden structure on site, the Doctor’s Office, built in 1855. Surrounding it all, the stone walls make it the oldest intact stone trading post in North America.

My favorite area was the stone furloft/saleshop built in 1831, one of the first — and most necessary buildings. The dozens of pelts, as well as the wooden barrels of supplies to be traded, made it all very clear how society worked during the fur trade. A Retail Store/Museum, the only reconstructed building inside the Fort’s walls, is a replica of the Company Retail Store built in 1873. There, I chatted for 20 minutes with the museum guide who never once stepped out of the period as she answered my questions!

The historic site is open year round to explore free-of-charge. Costumed interpreters are on site from May through the first weekend of September. Learn more about Fort Garry on the Government of Canada’s Parks Canada website.

This museum is a great family outing, as there are lots of activities kids can watch from cooking in the kitchen to heating metal in blacksmith shop.

Most people think of the prairies as being completely flat — and while there’s lots of land area that fits that description, the prairies are also home to Lake Winnipeg and Lake Manitoba. Lake Winnipeg is Canada’s sixth largest freshwater lake, and since it flows into Hudson’s Bay, was important to the fur trade. In fact, early transportation in Manitoba looked much the same as it did throughout North America with riverboats and steamers carrying passengers and goods throughout the area.

The first riverboat to arrive in Winnipeg, the Anson Northup, docked June 10, 1859, after travelling from St. Paul, Minnesota, up the Red River. Decades of river travel followed, along with the development of Lake Winnipeg as an important fishery.

In the early 1800s, it was the popular opinion that Lake Winnipeg had the potential to become the largest freshwater fishery in the world. Indeed, Manitoba has the largest inland water area in Canada next to Ontario, as well as an ocean coastline of approximately 600 miles. And, there are 95 freshwater species of fish in Manitoba’s lakes and streams!

The Maritime Museum of Manitoba, situated in Selkirk, around 25 miles from Winnipeg, has gathered the ships and artifacts to tell the little-known story of maritime history on the prairies. My grandson and I visited a few years ago, and found it fascinating. Our favorite ship was the S.S. Keenora, the oldest steamship in the collection, built in 1897. Of the artifacts, we were fascinated with the early diving suit and couldn’t imagine sinking into the water with the device!

Visit the Maritime Museum of Manitoba

The Maritime Museum of Manitoba is open seasonally, beginning at the end of May and closing the first weekend in September. Visit the website to find out more. 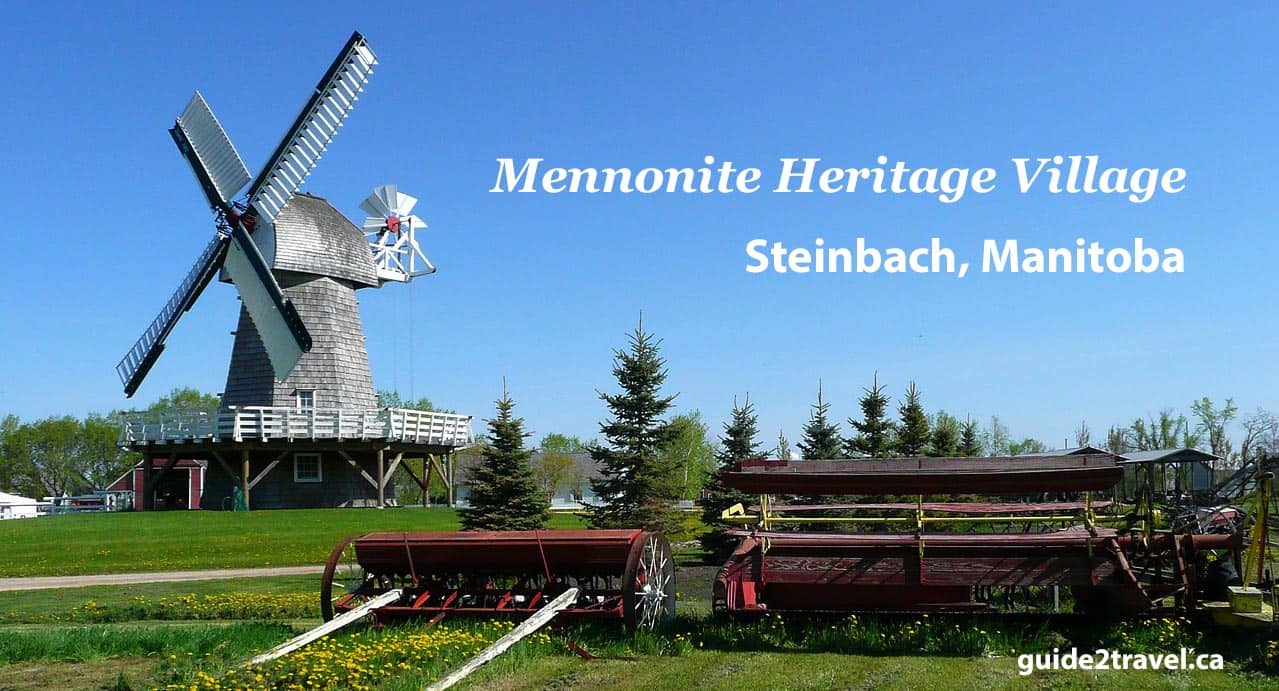 The prairie provinces are made up of a number of different cultural voices although the Hungarians, French, Icelanders, Romanians, Chinese, and Ukrainians were among the first to settle in the mid to late 1800s. After confederation in 1867, they were joined by many British, Belgians, Americans, Poles, Dutch, German, Finns, and Scandinavians. Russification in the late 1800s brought Doukhobors and Mennonites to Canada, after major violations of their cultural and religious rights.

The Mennonite Heritage Village in Steinbach, south of Winnipeg, celebrates the contributions of these Russian Mennonites to the province of Manitoba. Today, there are more than 200,000 Mennonites in Canada, with over half of them living in the city of Winnipeg.

Recreating the time period of their arrival in Manitoba, the 40-acre Mennonite Heritage Village is a fascinating cultural experience. There are 30+ buildings and locations ranging from the Blacksmith Shop and General Store, to a Monument to Mennonite Women and the Great Trek Memorial. My favorite feature was the fully operational Dutch windmill that operates over the summer season.

The Mennonite Heritage Village is open year-round, although the Outdoor Village is only open from May until September. Learn more about visiting on the museum website. 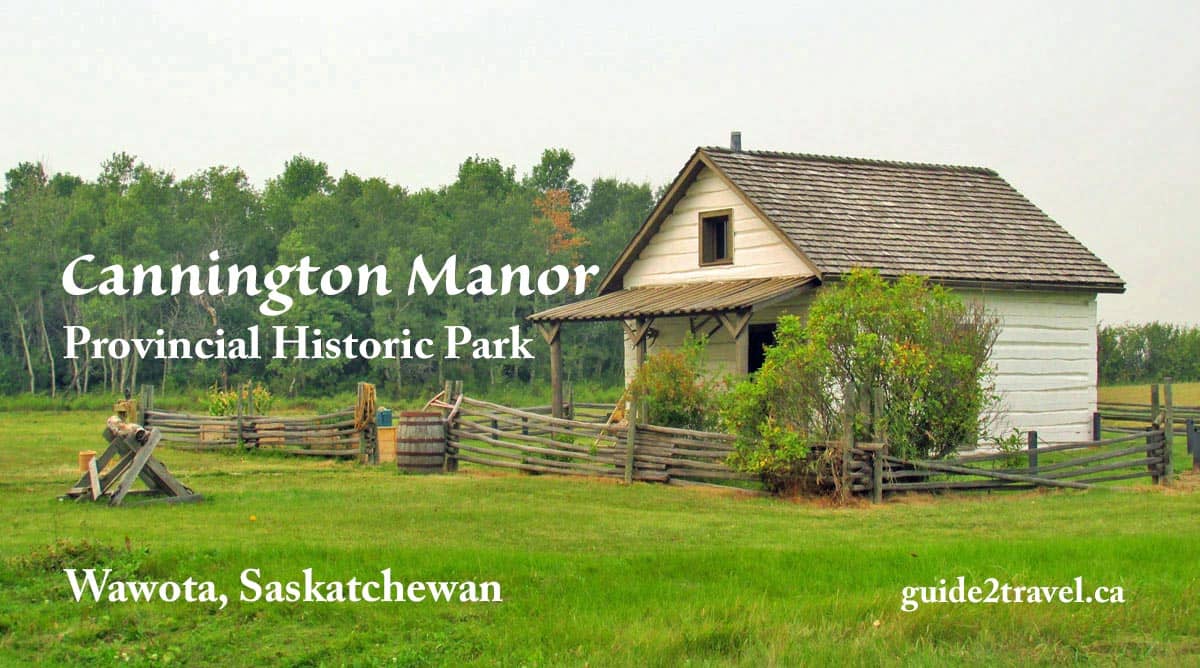 Cannington Manor Provincial Historic Park provides a totally unexpected twist to life as a settler on the Canadian Prairies in the late 1800s. The park is the site of a community established by Capt. Edward Pierce, who built a dream for the younger sons of well-to-do English aristocrats hoping to maintain their lifestyle in Canada.

The park consists of a number of reconstructed buildings on the original site (you can also see the Humphrys-Hewlett house which still stands on a site about two miles from the village). Costumed park staff are in a number of the buildings — on our visit we helped make rope, and tasted cookies fresh out of the oven of an old wood stove. (They weren’t even burnt, as mine were so often when I was a kid cooking on a wood stove myself!)

What really sets this historical site apart is the lifestyle of the planned country life utopia. A 26-room house with a ballroom, billiard room and servants’ quarters was the centre of that lifestyle — how fascinating it would be to be able to step back in time into it for an evening! Of course, there were also the necessities of life, and the village also had a flour mill, a dairy, a carpenter shop, and more.

Cannington Manor Provincial Historic Park is open from the end of May until the first long weekend in September. You can learn more about the park and its hours on the Tourism Saskatchewan website. 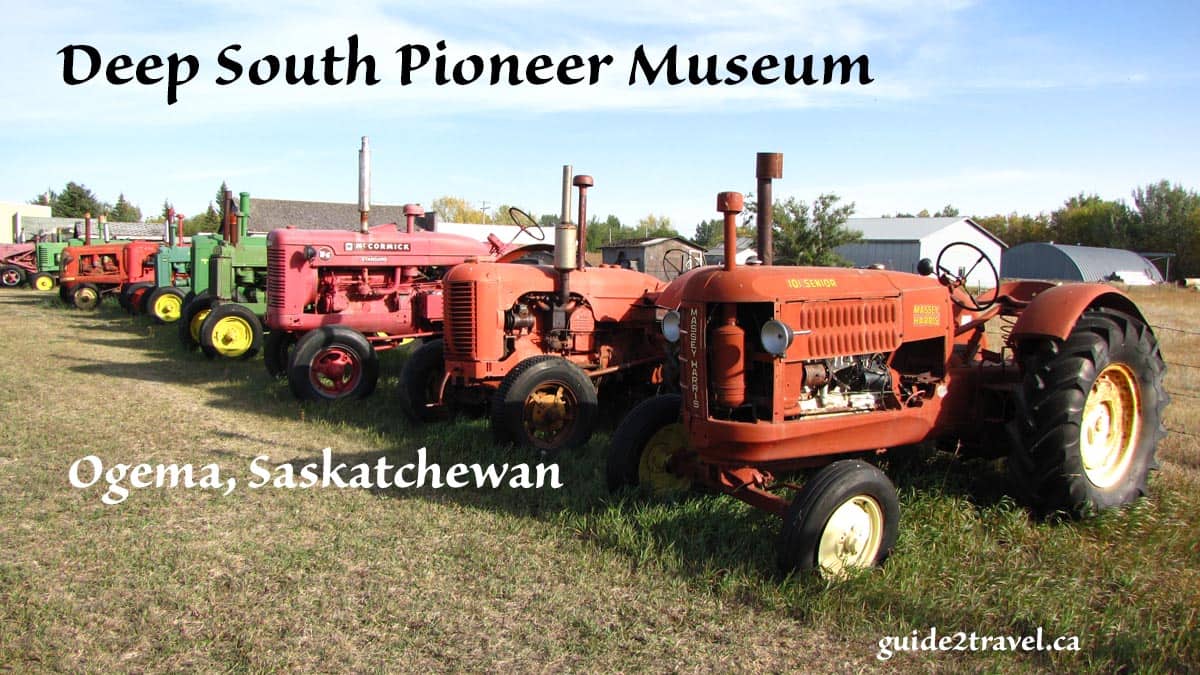 The Deep South Pioneer Museum shows the prairies the way they were for the farmers who built Saskatchewan into the Bread Basket of the World. Here, you’ll find the plows and tractors and threshing machines that turned the prairie sod into a thriving agricultural landscape.

With 30 original buildings from the Ogema and district area, everything here has been donated and is lovingly preserved. You won’t find interpreters here, just locals opening the locked doors on weekends and sharing their time with visitors.

Walk into a dentist’s office or hairdresser’s salon and see the tools of the trade over the past century. Every business vital to a community is preserved here and stocked with artifacts.

The 150 pieces of antique farm machinery are a vital part of the display. Every year in July, the Deep South Pioneer Museum holds a Show Day in July where many of these machines roar to life and make one more parade around the grounds. It’s an event not to miss — the date in 2017 is July 9. Check the Saskatchewan Tourism website for details.

The Deep South Pioneer Museum in Ogema is open from the end of May until the first weekend of September, with access on weekends only without making a previous appointment — see the Town of Ogema website for contact details.

I recommend including a ride on the vintage Southern Prairie Railway in your visit. We visited the first year it was open and enjoyed the trip back in time. Tours begin in June.

While Manitoba has a whole history of riverboats and ships, Southern Saskatchewan doesn’t — all except for the Sukanen Ship Museum. This ship’s story, though, is about a dream that never came to fruition, since it was built by Tom Sukanen to sail home to Finland. (Read my post about the museum here)

The ship, however, is now part of an amazing open air museum started by the local Antique Automobile Club of Saskatchewan based in Moose Jaw, in 1969. It joined the collection of what’s now a 100,000+ artifacts in 1977.

This museum, like the Pioneer Museum in Ogema, is operated and maintained by volunteers. On our visit, we were lucky to spend some time walking and visiting with Bill Young, who donated an extensive Allis Chalmers and Case IH collection housed in two 50ft x 96ft display buildings — it’s truly something to see if you want to know anything about farm machinery.

The Museum is open seven days a week from the end of May until the first long weekend in September. It took us five hours to cover the area and we still didn’t see everything, so leave lots of time! Everyone from the seniors to the kids will find this a great stop. Visit the museum’s website for details.

Moose Jaw is a great weekend destination, as it has many attractions including the Tunnels of Moose Jaw and the Mineral Spa and Casino.

The Ukrainian Cultural Heritage Village is in central Alberta, just 25 miles east of Edmonton on the Yellowhead Highway. Edmonton is home to one of Canada’s largest Ukrainian communities, many of whom have ancestors that arrived around 125 years ago.

This open air museum has costumed interpreters in a number of the 35 different buildings, which have been relocated here and restored. There are also over 60,000 artifacts that help recreate the everyday lives of this early Ukrainian settlement. For information on visiting, see the Ukrainian Cultural Heritage Village website. 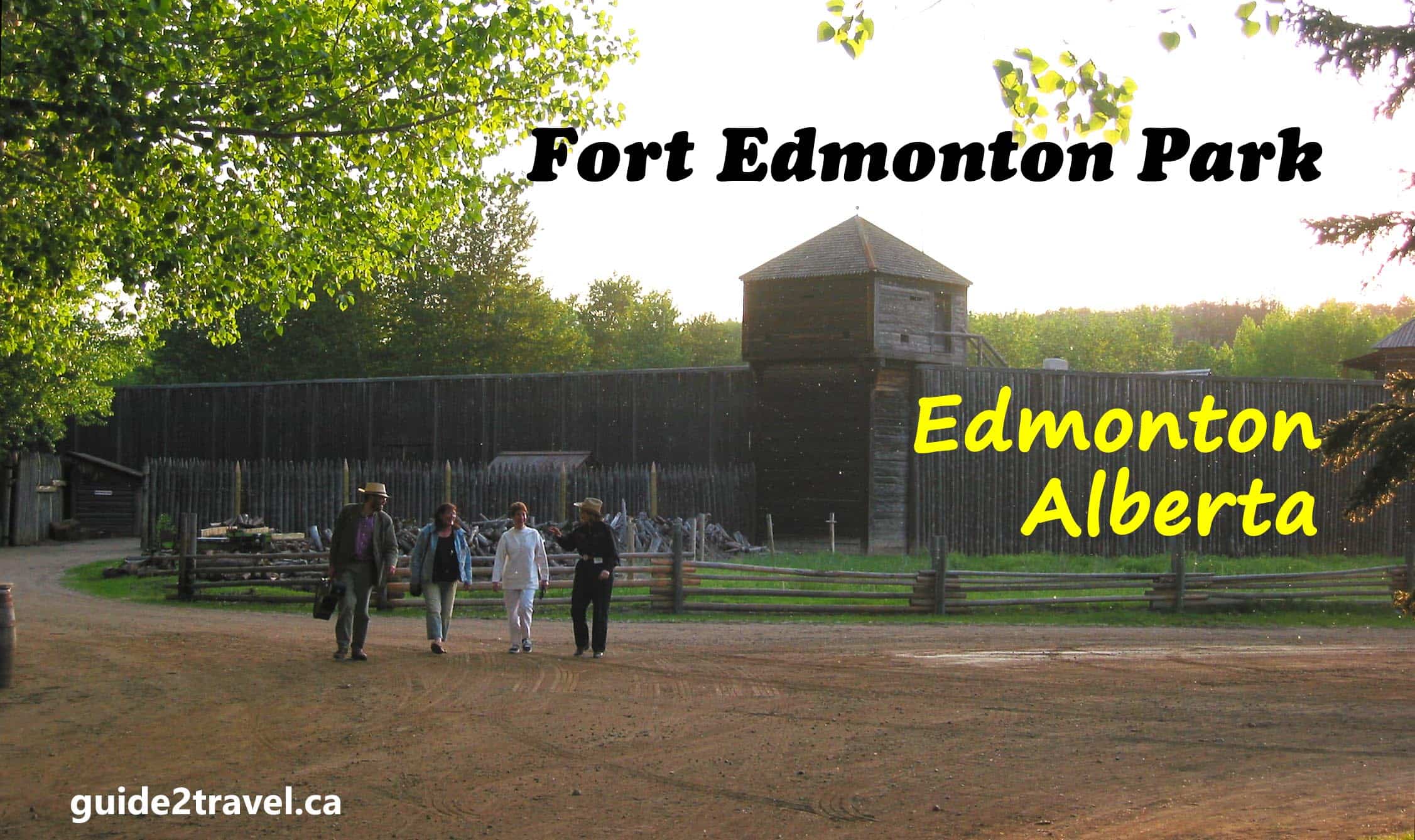 Our tour of the top 8 open air museums in Canada ends with a Fort, the same way we started. Fort Edmonton Park is a recreation of the original fort, which like Fort Garry, was a Hudson’s Bay Post, although it was established 35 years earlier, in 1795. Today the park, located in southwest Edmonton, acts as a living hsitory museum, depicting the early development of the city of Edmonton. Indeed, the Fort Edmonton Park is one of Edmonton’s most popular tourist attractions with over 170,000 visitors annually.

The park features four time periods, starting with the fur trade era and the fort, along with streets from: 1885, 1905, and 1920. Each period is distinctive in the city’s history. The 1885 section recreates the growth of the community beyond the walls of the fort and the fur trade. In 1905, Edmonton became the capital of the newly formed province of Alberta, with 1920 showing its growth as a city.

My favorite section of the park was the fort, which had everything from a windmill to an ice house to a watchtower. However, the air hangar, brickyard, and streetcar barn of 1920 ran a close second!

Fort Edmonton Park is open from the end of May until the first weekend of September. It’s staffed with costumed interpreters who do a great job of answering your questions. With so many places to explore and so much to learn, it’s a full day of activity for a family.

From Manitoba’s capital, Winnipeg, to Alberta’s capital, Edmonton, with stops across Southern Saskatchewan outside of its capital city, Regina, it’s just a thousand miles to travel back in time to explore Western Canada!