St. Adalbert Church stands out not because of its grandeur in Krakow’s Market Square, but because of its simple white masonry, hard-to-put-a-finger-on design, that’s topped with a simple cross. Indeed, parts of the pre-Roman, Roman, Gothic, Renaissance and Baroque architectural elements date back a thousand years to the 11th century in this historic place. 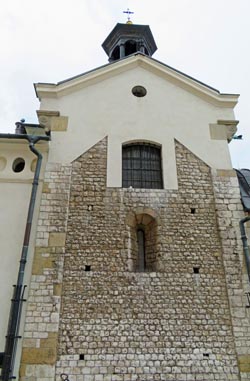 Exterior of St. Adalbert Church in the Krakow Market Square in Poland.

Krakow Market Square, also known as Krakow Old Town, is a UNESCO Heritage Site. Its architecture of flying buttresses, pointed arches, ribbed vaults and more, begs to be studied as you walk along the cobblestone paths. Still one of Europe’s largest medieval districts, I found something fascinating at every turn.

St. Adalbert Church attracted my eyes because it sits a little oddly in the square. While the layout of the square hasn’t changed much in over 750 years, the street level has risen over time. Now, one side of the church seems to have a cellar entrance that dips a couple of meters below ground level. Here, visitors sat on a rock enclosure, tossing bagel crumbs to the pigeons.

And bagels are easy to find! You can buy them with everything from poppy seed to sesame seed to pizza spread toppings from street vendors scattered around the city. The pigeons too, are a tradition in this historic square.

But back to the church. Its entrance is at the bottom of a staircase inside the enclosure. Here, you can buy both a ticket for admission and an information booklet. I paid my zlotys and stepped into the cool interior, glancing around at the rocky walls that had withstood everything from Tartar raids to Communism. 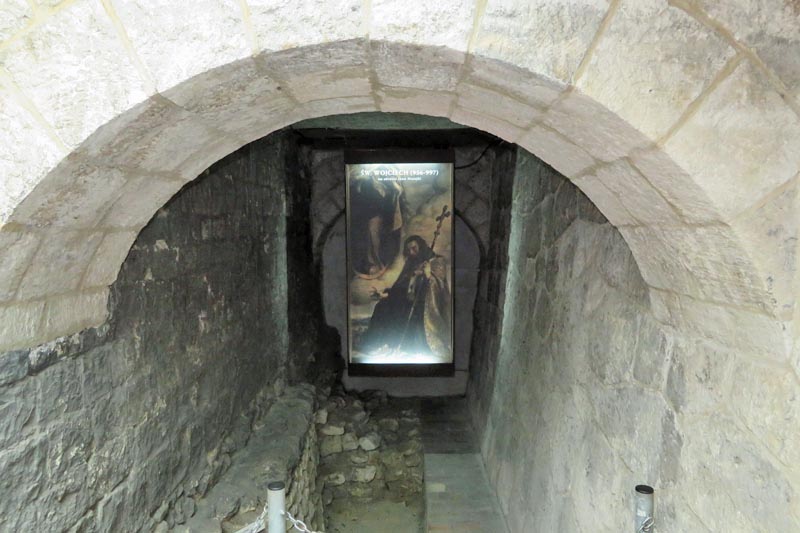 A painting of St. Adalbert (956 – 997), set into an enclosure, caught my attention. It almost seemed like “Saint Wojciech” (his name in Polish) could step out between the rough rocky walls with his cross and touch my hand. As I explored, I also found a variety of other artifacts displayed such as pottery from the time the church was built, along with paintings that provided its history.

The church may be small, but it has the power to leave an enormous impression of the amount of time that has passed since its first worshipers walked barefoot through its doors.

Who was St. Adalbert?

Saint Adalbert was born in 956 in Bohemia, which is now part of the Czech Republic. He had a royal heritage, being descended from the Slavník princes of Bohemia. His theological training was taken in Magdeburg (Germany) and he was the first Czech to ever become the bishop of Prague. A missionary to the Hungarians, Poles, and Prussians, he was martyred in his efforts to convert the Baltic Prussians to Christianity.

Krakow was founded in 1257, but St. Adalbert Church was built earlier, inside an open village of wooden houses and outbuildings believed to be part of an industrial settlement. At the time, the church was the only masonry building and would have been made using limestone with sandstone blocks thrown in.

At the time, the church wasn’t part of the growing Market Square. It’s believed it became incorporated in the 15th century, when the ground was leveled and paved. Wooden market stalls were soon scattered around the square to serve the needs of local residents, along with defensive tower-like buildings of stone with slit windows. 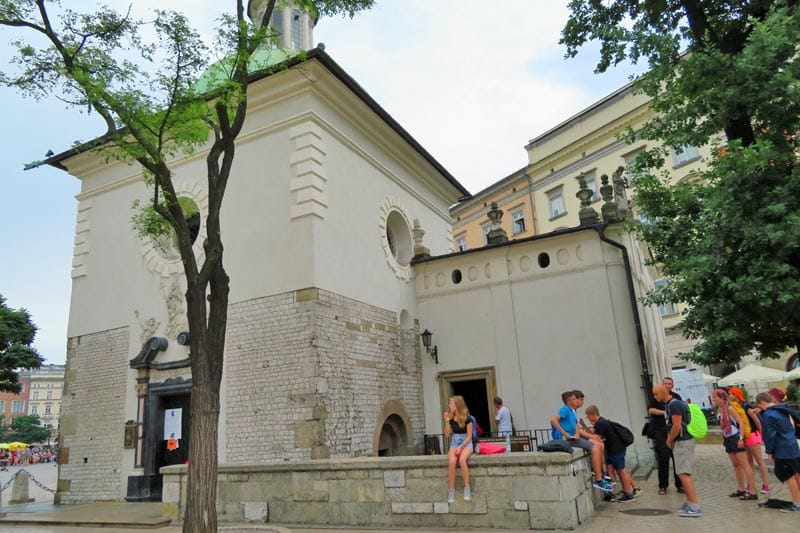 Find the best deal, compare prices, and read what other travelers have to say at TripAdvisor about St. Adalbert Church.

Information in this article is from The History of the Cracow Market Square and Church of St. Adalbert booklet, published by the Archaeological Museum in Cracow and the Cracow Municipal Office.

Have you visited Krakow?

Have you visited Krakow? If so, what were your favorite parts of Krakow Old Town? Let us know in the comments below.

St. Adalbert Church is the small masonry building on the left of the image. Erected about 1100 AD, it’s one of Krakow’s oldest sacral buildings. The large, imposing brick Gothic church in the photo is St. Mary’s Basilica, which opened in 1387.