Visiting Southwest Louisiana is all about the culture, from crawfish etouffee and boudin to Cajun and Zydeco music. And we discovered the best of both in Eunice, a small city named after its founder, C. C. Duson’s, wife. 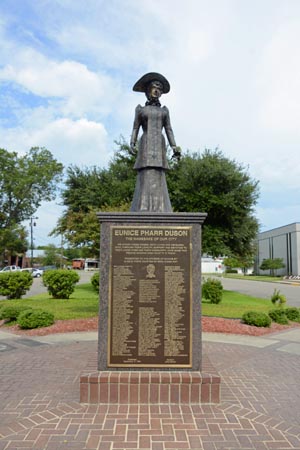 Statue of Eunice, wife of the founder of the city of Eunice in Louisiana.

Duson had an adventurous history that started out with spending time as a POW in Washington, LA, during the Civil War. There, he met James Hayes, who appointed him as a deputy sheriff two years later in 1867.

The law, it seems, was Duson’s ideal career, as he captured a number of infamous criminals. His skill with a pistol was legendary, including a story claiming he killed 96 alligators with 96 shots from a boat near Morgan City!

But getting back to the town of Eunice…

Duson started selling town lots in 1893-94 from 160 acres he’d purchased to establish the town. First, though, he’d convinced the Southern Pacific Railroad to set up the Eunice Depot on his newly purchased property. Today, the Depot is a museum listed on the National Register of Historic Places.

Eunice’s Liberty Theater, home of the “Rendez-Vous des Cajuns” Radio Show and Liberty Center for the Performing Arts, is also on the National Register of Historic Places.

Find out more about the Eunice Depot Museum at: http://www.louisianatravel.com/la-attractions/eunice-depot-museum

The Liberty Theater started out in 1924 as a vaudeville/movie house, now listed in the Great American Movie Theaters Preservation Press Guide published by the Smithsonian. During its heydays in the 1920s and ’30s, it hosted such famous people as Roy Rogers, Tex Ritter, Lash LaRue, and the Bowery Boys. (Source: Eunice, 2009, by Alma Brunson Reed and Van Reed, Arcadia Publishing) 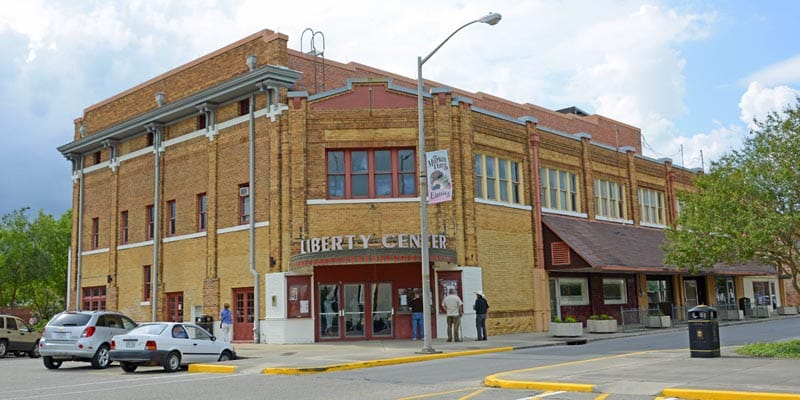 A community restoration project restored the Liberty Theater to its former glory, re-opening in 1987 with a 1 .5 hour live radio program called the Rendez-Vous des Cajuns. The show features Cajun and Zydeco music, local recipes, and Cajun humor in a mix of English and French.

While the Rendez-Vous des Cajuns is still played Saturday nights for KRVS, Radio Acadie, we attended the live Cajun Grand Old Opry event. Three long rows of wooden seats, split by wide aisles, lead to the focal point of the theater — the stage. A painting of the bayou, complete with a live oak and Spanish moss, help create the atmosphere of the show with its lively Cajun and Zydeco music. 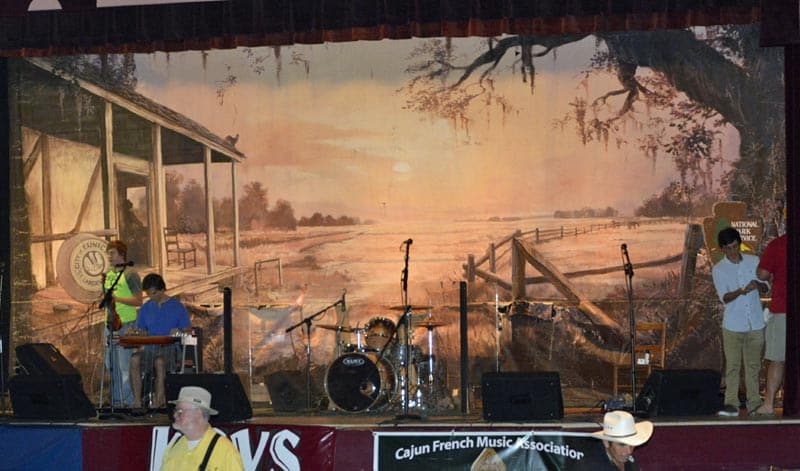 And lively it was! From foot tapping to dancing in front of the stage, the music begged us to move. A number of people, from a pre-schooler dancing an amazing jig by himself, to grey-haired couples moving in complete harmony to the two-step pumped out by a Cajun accordion, spent a lot of the night on their feet. Indeed, it was all about rhythm and harmony. For me, the accordion music brought back memories of Hungarian gatherings at my grandparents’ home when I was a child. While the French lyrics were different, the music felt the same.

What better way to wrap up a night of Cajun entertainment than with some great Cajun food? Eunice has been home to the World Championship Crawfish Etouffee Cook-Off since 1986. The March event celebrates the local crawfish industry as well as the chefs who create some of the best etouffee in Louisiana!

And the crawfish etouffee I had at Ruby’s Restaurant & Courtyard was definitely in the running for the best. Check out Ruby’s on Facebook.

Eunice, Louisiana, is slightly less than 200 miles from New Orleans.

The photo above was taken inside the Liberty Theater in Eunice, Louisiana.