Instead of staring down at diners from his mount on the wall, the red longhorn steer at the historic Montana Bar once led a herd of a thousand, or more, mooing cattle through Miles City on their way to the railhead. He’d have had dust in his eyes then, churned up from the town’s dirt streets. Behind him, a drover on horseback would have been working constantly to keep the mass following their leader. 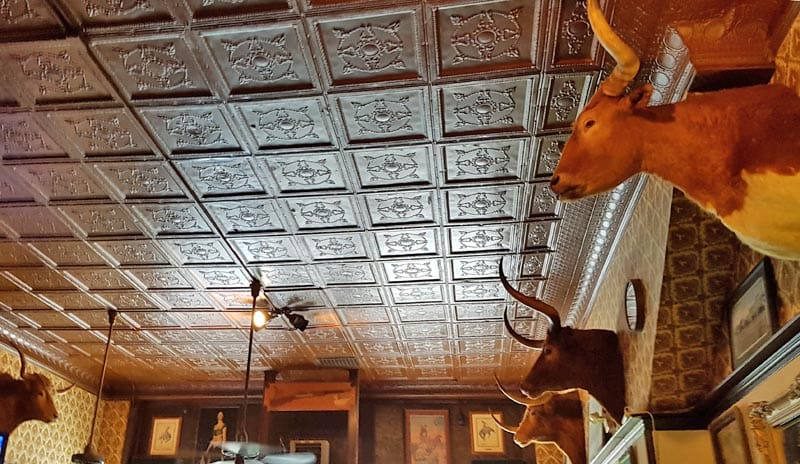 Look up at the Montana Bar in Miles City to see the vintage original tin ceiling and longhorn mounts.

It was a time before the devil’s rope — the barbed wire fences — that farmers eventually put up to change the way cattle were raised and sent to market.

Sitting in the Montana Bar with that steer staring over your head, you might still be able to imagine the trail boss yelling, “Head em up.” Or at least I could. But then again, I grew up on an appaloosa horse ranch, and when I married David, moved to his family’s cattle ranch, the Rocking A, where quarter horses were king.

It’s no surprise then, that we both enjoy a location with Western appeal.

History of the Montana Bar

The location of the Montana Bar, 612 Main, was home to a saloon around the early 1890s. Then, from 1900 to 1907, instead of whiskey and brass spittoons, the smell of saddle maker’s leather filled the building.

James Kenney turned it back into a saloon in 1908, eventually taking his son, George, into the business and renaming it Kenney and Son. The current, two-story brick building was built in 1913, and fitted out with many of the elements we still see today. 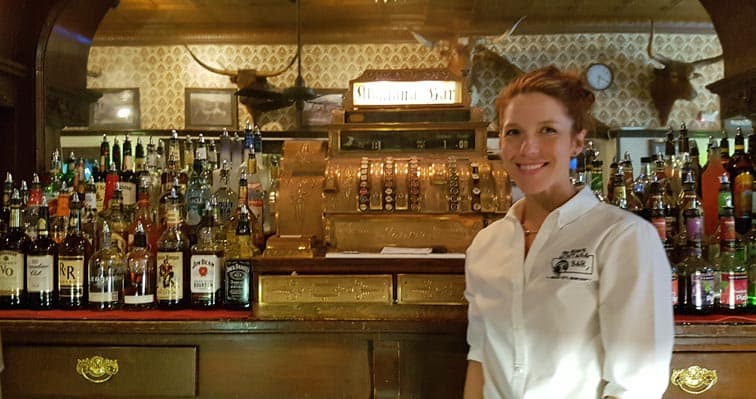 Vintage 1914 National brass double draw cash register (still workable but not in use) at the Montana Bar in Miles City, with bartender, Bobbi Jo.

The beautiful bar you see in the photo at the top of the page arrived by steamboat from St. Louis. It’s a Brunswick, and a true beauty! At the time, there weren’t any barstools in front of the counter. Instead, stand-up customers were served from the brass railing along the front.

A walk-in ice box ensured patrons got their beer ice-cold. In fact, keg beer was even dispensed through two spigots on its front. Today, they no longer use river ice for the coolant, but have updated it with modern refrigeration.

While David never mentioned it until after we left, so I didn’t get to sneak in to see it, the men’s restroom has an original — and rare — porcelain urinal and marble-walled stall. Since ladies weren’t all that welcome in a saloon, their facility was a simple lavatory down the stairs in the basement!

Of course, there are always stories to go with every historic building and a bullet hole is the perfect story starter! You can check out the hole in the original front partition. But how did it get there? It seems a gentleman checking his gun at the door (required in those days) was a little bit nervous as he carried a cocked gun that went off accidentally. While a gunfight might have made for a better story, it seems the gentlemen’s agreements that took place were friendly here.

By the 1980s, the building had lost a lot of its glow, and was scheduled for demolition after four years of vacancy. However, a group of stockholders worked together to return it to its original glory and reopen it as the Montana Bar.

Dining at the Montana Bar

While we truly enjoyed the atmosphere at the Montana Bar, we found the food equally as good. 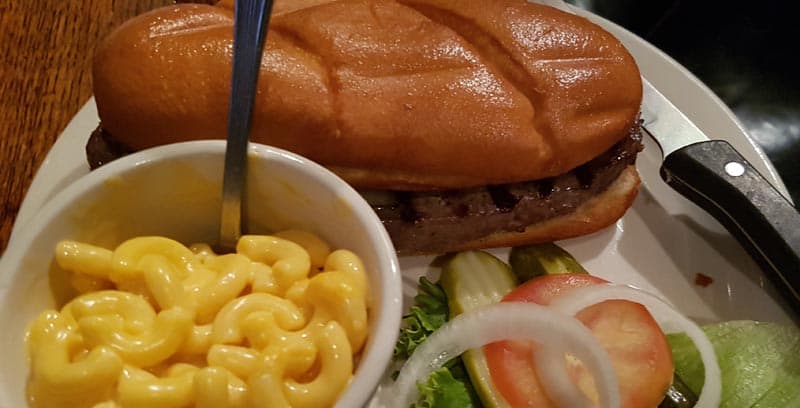 David’s Montana roadtrips ultimately end in a mission to find the best steak. After all, you can’t drive in Big Sky Country without noticing all the cattle ranches. So, he ordered the Angus Ranch Steak Sandwich, which he assured me was up to the high quality standards he’s found all across the state. In fact, he declares he’s never had a bad steak in Montana — or even a mediocre one.

Cattle might be David’s background, but my eating history is much more to chicken and pork, so I ordered the grilled chicken sandwich. It was delicious, although next time I’d skip the cheese and savor the lemon pepper seasoning I selected. The cheese curds as a side though, were perfect.

Check out the Montana Bar menu on their website. 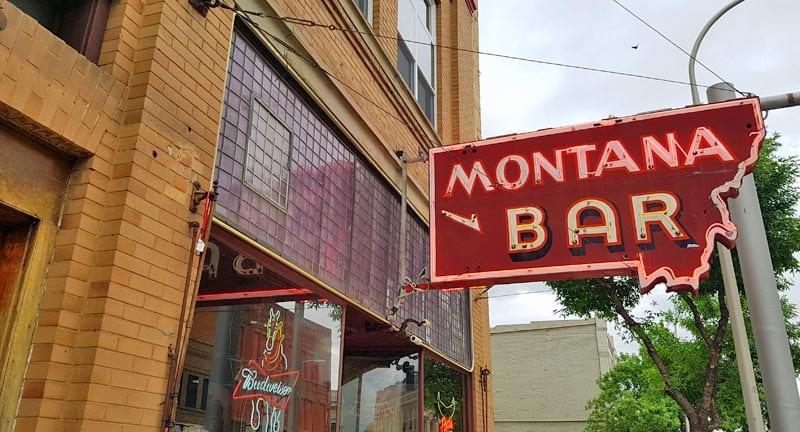 Check out the Montana Bar online at: http://themontanabar.com/

The Montana Bar is in Miles City, which is about two hours from Billings on Interstate 94.

The photo above is of the interior of the Montana Bar at 612 Main Street, Miles City, Montana.