Volcanic craters, cinder cones, crumbles of lumpy lava — it may indeed all seem like an alien moonscape. However, it isn’t. It’s actually a 618 square mile (1600 square km) Preserve in the state of Idaho. It is, however, aptly called Craters of the Moon.

Perhaps it’s my fascination with the idea of aliens living on other planets, or curiosity about legends of “lost” cultures swallowed in the red-hot flow of volcanic eruptions, but as soon as I saw the sign for Craters of the Moon I knew I had to visit. 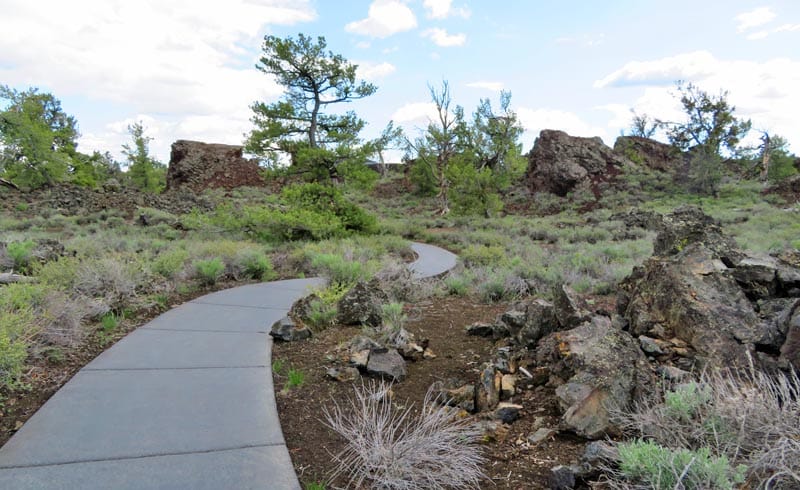 Devil’s Orchard Trail at Craters of the Moon

Craters of the Moon National Monument and Preserve Established

The Craters of the Moon National Monument and Preserve is situated in Idaho, along Highway US 20. When the Monument was established in 1924, over 1500 people traveled over the cinder pathways to attend the dedication ceremony for the area President Coolidge had declared to be both weird and scenic.

While Coolidge nationally recognized the area, it was Robert Limbert whose research and work pushed the decision makers. Limbert, a field naturalist who had worked for the Smithsonian Institution before moving to Boise, Idaho, grew fascinated with stories told by fur trappers and set up explorations to learn more.

After a 1921 expedition, he published an extensive article in a 1924 issue of the National Geographic Magazine, along with photos and a map. Limbert compared the volcanic marvels to those of Vesuvius and Kilauea , predicting that it would become a great tourist attraction. You can read a PDF of his original article here. 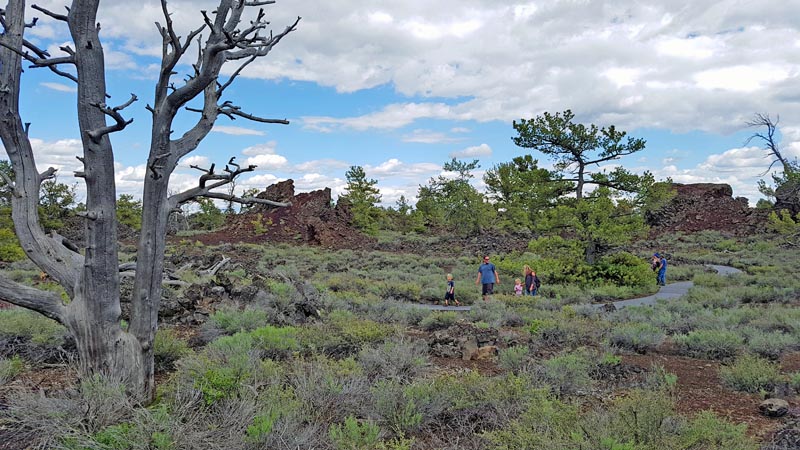 Petrified tree at Craters of the Moon.

About Craters of the Moon

Visitors have been exploring Crators of the Moon for centuries, beginning with the Shoshone people whose homeland was Southern Idaho. Indeed, there’s evidence to show it was often part of their annual migration from summer to wintering spots near Yellowstone. It’s even likely some witnessed the last eruptions some 2000 years.

By the time Limbert and a party that included scientists came through in 1921, there had been as many as 60 different lava flows taking place over at least 13,000 years. The area has some of the best examples of open rift cracks in the world. One is even Earth’s deepest, at 800 feet (240 m) down. 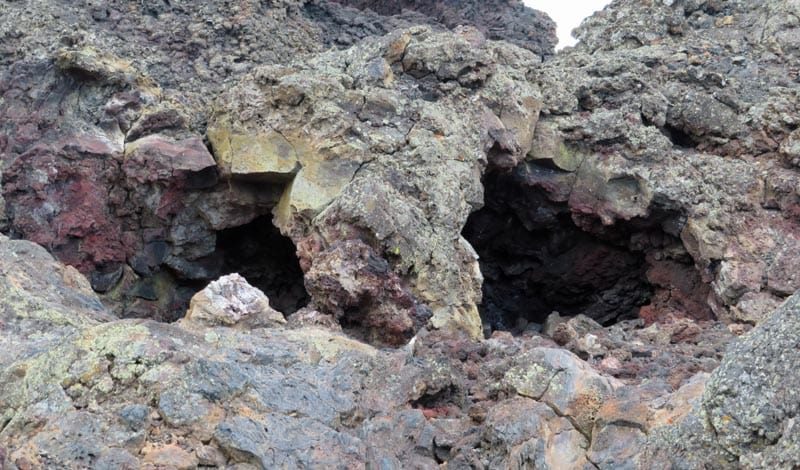 Formations at Craters of the Moon

Other things that visitors see include cavities left by trees burnt in the lava called tree molds, along with lava tubes. Tubes are the conduits formed from hot lava flows that have turned into a type of cave as they cool. There are also examples of almost every variety of basaltic lava.

Visiting Craters of the Moon

Visiting Craters of the Moon is much easier than we expected. Since David was in recovery from a broken leg, he was still having trouble walking. In fact, we nearly skipped the site and left it for another trip.

We were glad we didn’t!

It’s actually a very easy place to visit whether you’re in a wheelchair or using a cane or ready to run a marathon. The Visitor Center is free to visit, but once you pay your fees to enter the Preserve (note they currently only take credit cards – no cash) the whole trip is on paved roads and walking paths. 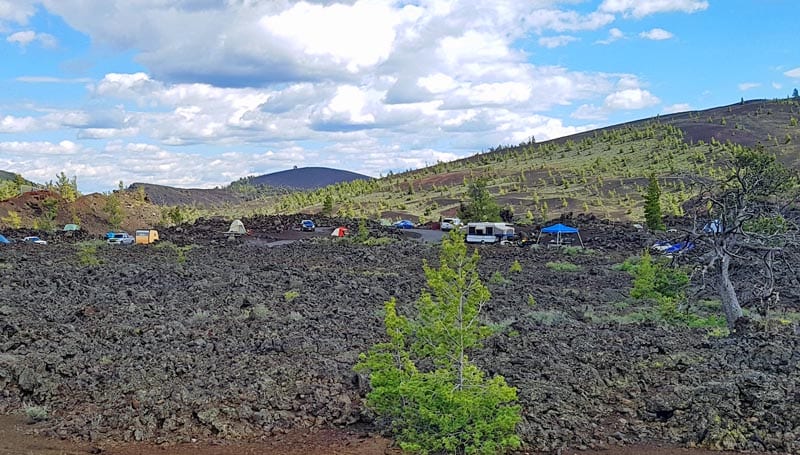 Campground at Craters of the Moon

The campsites are situated right opposite the Visitor Center — just seeing the tents strewn here and there over the rocky landscape, and campers sitting askew, was worth the price of admission, as they say. While we’re not campers, waking up in the middle of the night to find myself in such an alien terrain might have made me feel like I was really sleeping on the moon.

It takes around 45 minutes to an hour to go around the tour, unless, of course, you decide to take the longest walk out to the Caves Trail (.8 miles each way). While David enjoyed the scenery from a distance, I climbed through a variety of the formations and looked over the edges of crumbly lava rock to see snow still at the bottom of the lava tubes.

If you’re looking for an experience to convince you of the wonders of the world — visiting Craters of the Moon is one! If you’ve already visited, please share your thoughts in the comments area. 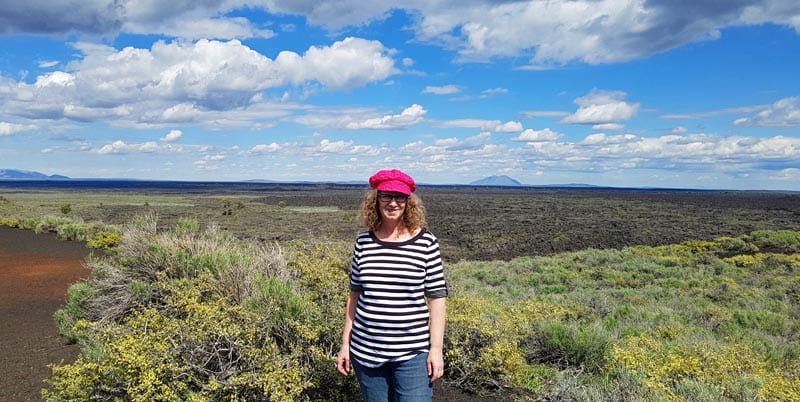 Linda Aksomitis just outside the Craters of the Moon monument area, where the Sagebrush Step Grasslands meet with the Lava Fields.

How to Visit Craters of the Moon

More Things to Do in Idaho & Wyoming

The Frontier Auto Museum is absolutely amazing — step back to 1950s and ’60s cars, a stocked auto garage, toys, petroleum collectibles, and more.

Do Ghosts Really Haunt the Frontier Prison in Rawlins, WY?

Wyoming Frontier Prison Museum is a fascinating historical place — the cold chills you feel when you visit may not be just because it’s unheated. Experts say it’s haunted!

Devil’s Gate is a Wyoming landmark registered on the National Register of Historic Place. The site is in the Rattlesnake Mountains on the Sweetwater River.

The photo above is taken at Craters of the Moon National Monument & Preserve in Idaho, United States.