...travel adventures with a twist of history Latest ArticlesAdventures
Adventure travel pushes you to new limits and nothing is newer to most of us than a via ferrata. What’s that, you ask? Well, a via ferrata is a mountaineering course that lets you safely experience rock climbing combined with class 4 hiking. It’s a place where the rush begins! 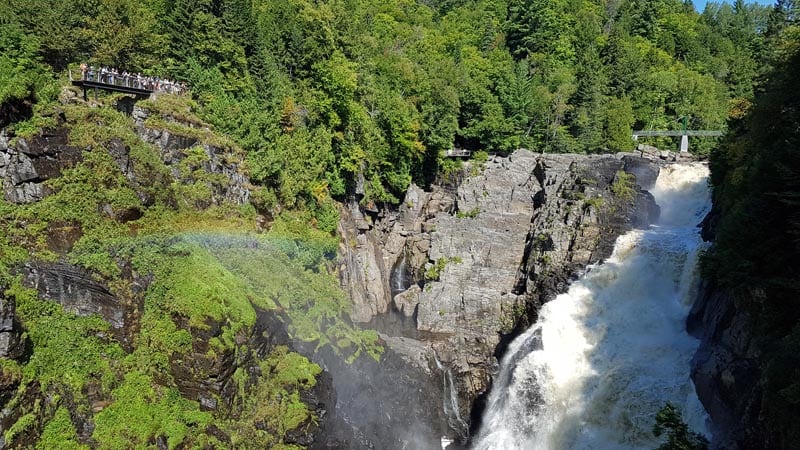 I signed on for the via ferrata on an “Outdoors Extravaganza” trip as a guest of Tourisme Quebec and Quebec City Tourism. The main itinerary item was the Grand Prix Cycliste de Quebec in Quebec City. The day after the race, I was to visit the impressive canyon carved into the bedrock by the powerful Sainte-Anne Falls and try the via ferrata.

To be honest, I thought via ferrata was the name of a hiking trail of some sort along the canyon — I just didn’t know what sort.

When we arrived at the top of Canyon Sainte-Anne, I had to agree the view was spectacular. Water rushed over the falls, glistening in the morning sun. We even saw a mini-rainbow!

I was ready for a hike. As the guide started explaining what we’d be doing on the via ferrata, my heart began to pump like I’d just downed a cup of espresso (I don’t drink coffee at all so even a little caffeine gets me revved up!). It was a hike with a twist all right. Me? Climb a canyon?

Our guides, Oliver and Sebastian, assured me I’d be safe. After all, children over six (taller than 42 inches or 107 cm) can take part, and we were just climbing the shortest route.

I strapped on the gear.

Starting the Canyon Sainte-Anne Via Ferrata 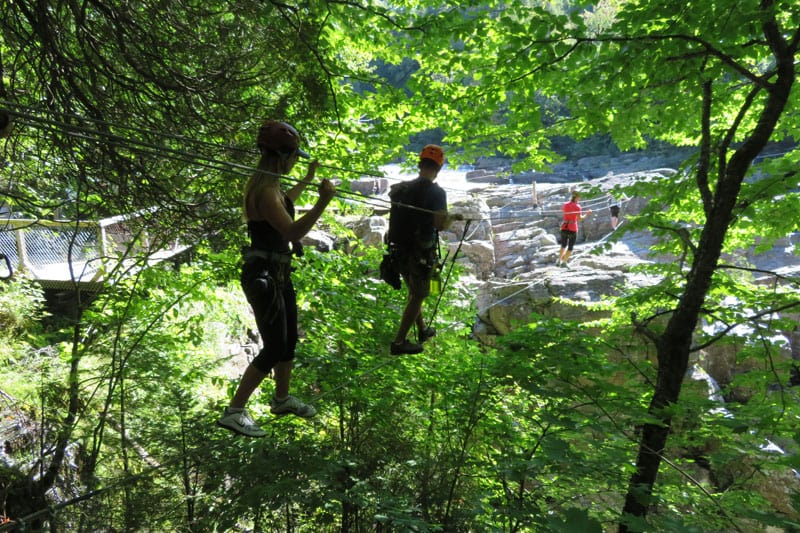 First steps on the Canyon Sainte-Anne via ferrata wire over rushing water.

The thing about mountain climbing is that I’ve always been afraid of heights (since my mother found me sitting on top of the refrigerator when I was two, although I have to take her word for it since I don’t remember). Admittedly, I’ve done a lot of things to overcome it as a travel writer. The first was a number of years ago, when I rode a Tennessee walking horse in Kentucky’s Appalachian Mountains. And the latest was snowmobiling Quebec’s Chic-Choc Mountains.

However, I’ve never done anything scarier than taking those first steps on the steel cable that crossed the canyon over the tops of all those trees!

My motto in life is simple: Look straight ahead, don’t think about what could go wrong, and find a middle balance. It worked for tightrope walking too. 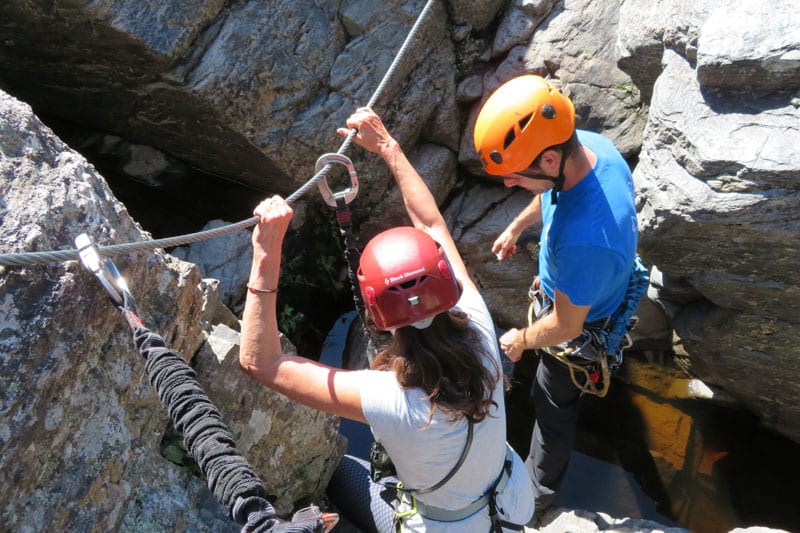 You cross the via ferrata by clamping metal connectors attached to your harness to the steel cable that winds around the mountain. The cables hold you up if your feet slip off the footholds, which can be pegs pounded into the rock or rock ledges.

At first, I was clumsy sliding the clamp down the cable. And even clumsier at guiding the clamp past the additional guide wires (see the extra clamp and cable in the photo above) as it has to be turned sideways to slide through. However, with practice it got easier.

Soon, I was rolling right along.

Climbing the Via Ferrata 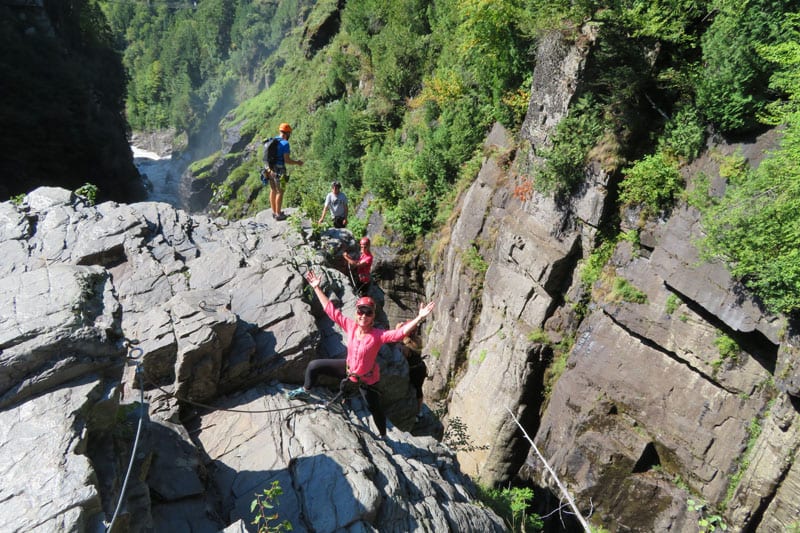 You can do it – Canyon Sainte-Anne via ferrata

Moving along on top of the canyon built confidence, as it was relatively easy. Then, we came to the first “down” of the course. I’d chosen to take a position at the rear of the group, as I knew my age as a baby boomer would keep me slower than the younger climbers, plus I have fibromyalgia.

Not that you have any choice but to keep going once you get started anyway. With some encouragement from those ahead of me, I dropped my legs over the rock face and found the footholds. Down I went. 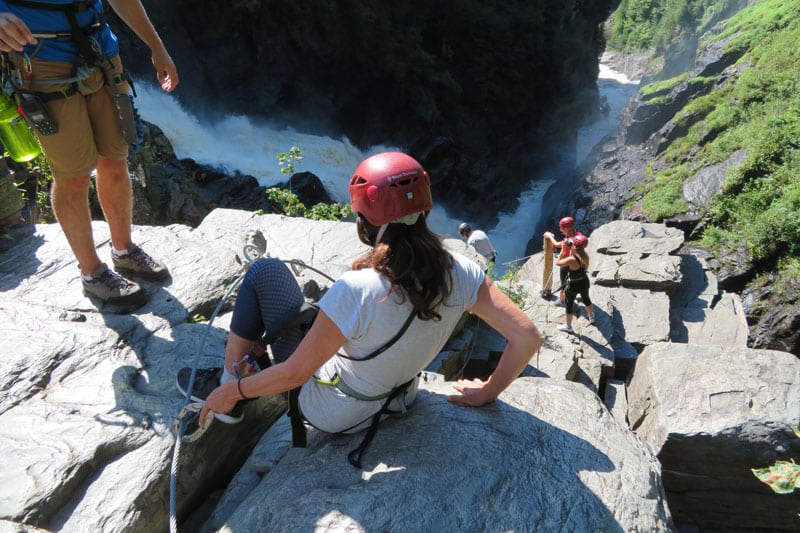 The course takes you from one side of the steep-sided gorge canyon to the other. Most of the time, you’re going down. On one hand that makes it easy, while on the other hand that meant I had no choice but to look at the swirling water below.

Beneath me, the Sainte-Anne-du-Nord River rushed by, glistening in the sunshine. The river drops over a 74 m (243 ft) waterfall within the canyon, so the sounds of cascading water erased any other noises except the pounding of my heart. 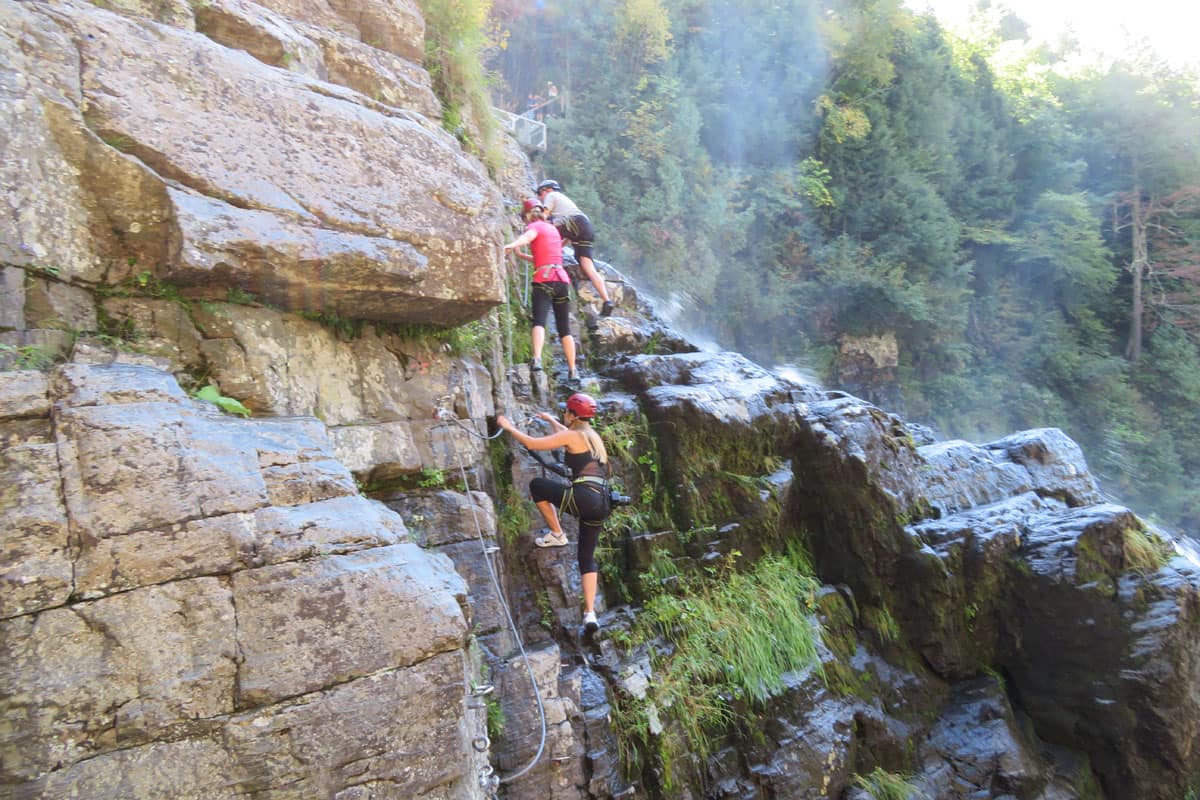 Climbing the via ferrata is hard work, so when the mist from the falls drifted over me it felt incredibly refreshing. Wet rocks, though, are another story altogether.

Being at the back of the pack gives you a bird’s eye view of exactly where the footholds and handholds are on the course. It doesn’t make it any easier to pull yourself up slippery wet rocks though.

I’ll also admit that by this point my legs were starting to feel like rubber sticks.

Sometimes it has to be mind over matter, so I gritted my teeth and pulled myself up the side of that canyon. Well, a lot of encouragement from my guide, Sebastian, helped too.

By that point, he assured me, the end was near.

Minutes later, I handed the camera that had been dangling around my neck (taking photos is a great excuse to stop and take a rest when everyone else is climbing and getting ahead of you) to Oliver. He’d been leading the group, while Sebastian brought us safely from the back.

While I found it especially rewarding to work at overcoming my fear of heights, the via ferrata was an amazing experience that I recommend to everyone from six to eighty-six. As George Patton said, “Accept the challenges, so that you can feel the exhilaration of victory.” 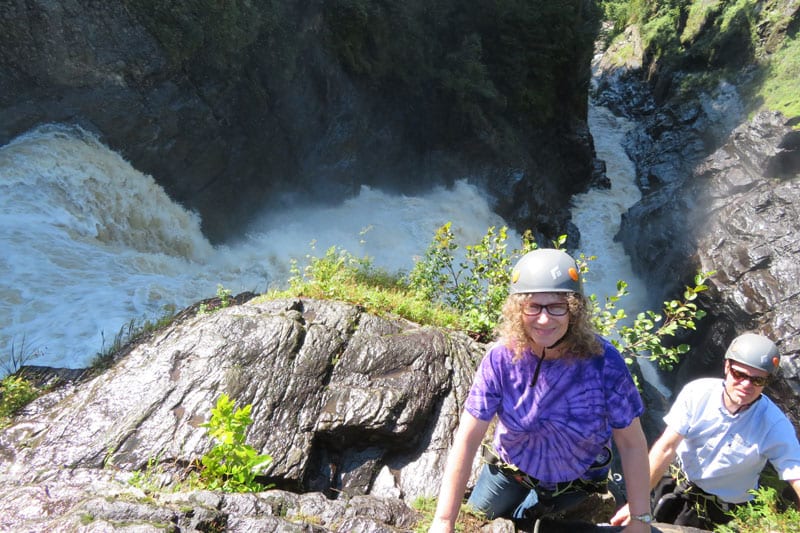 In addition to the via ferrata, you can also do a Canyon Sainte-Anne adventure. There are special discount prices for packages.

The adventure is just minutes from Quebec City.

I experienced the via ferrata during a trip to Quebec City hosted by Destination Quebec and Tourism Quebec. Thanks again for an amazing experience!

Find More Things to Do in Quebec

The photo above was taken by Linda Aksomitis at Canyon Sainte-Anne outside Quebec City, Canada. 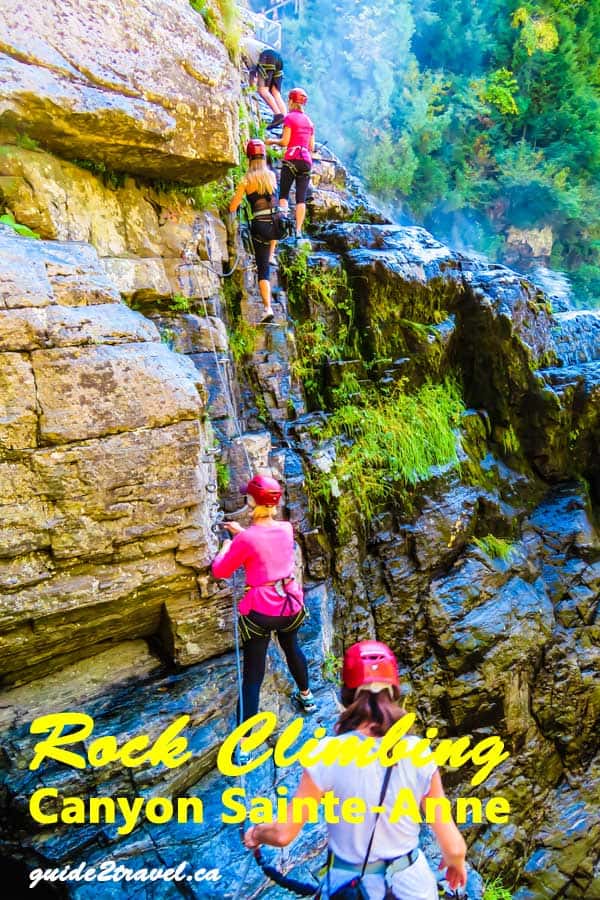 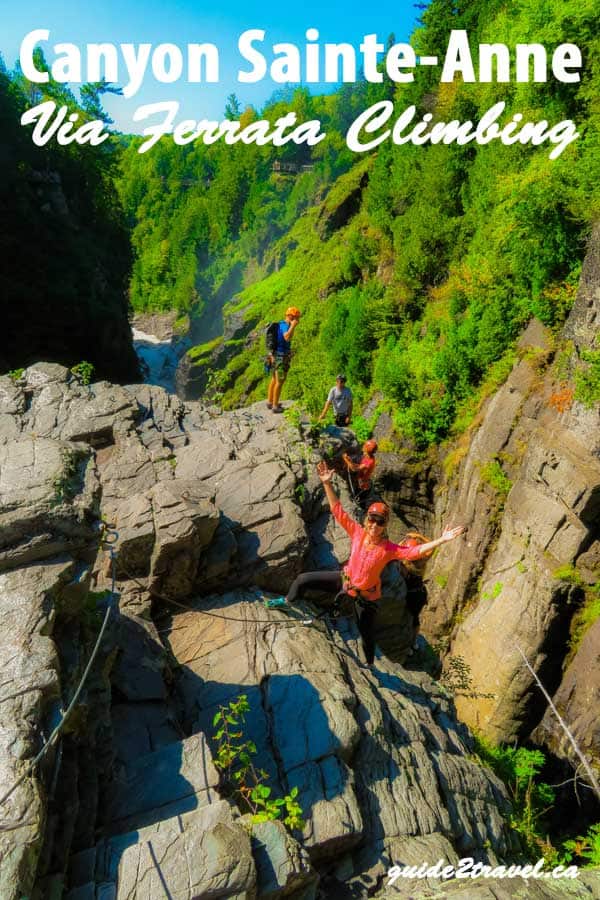 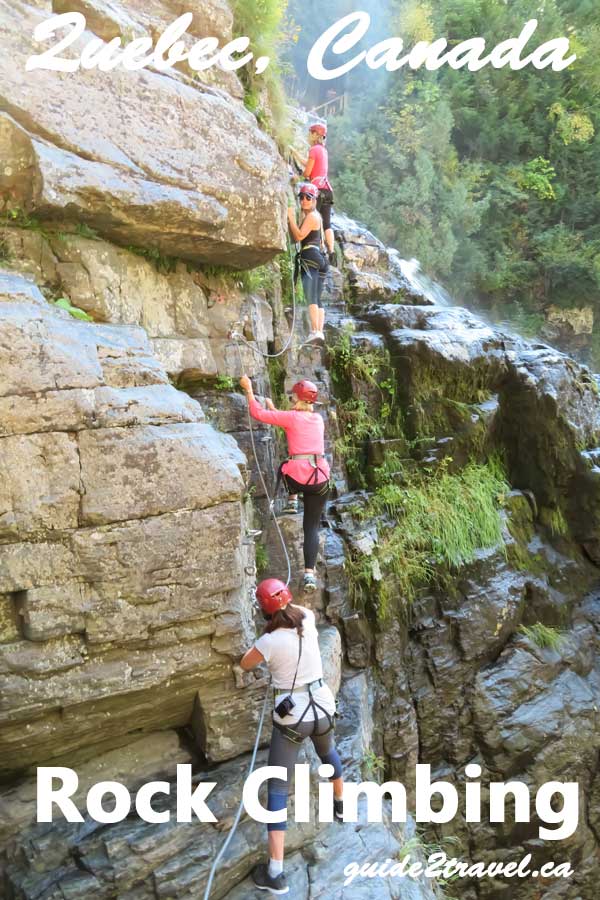