Courthouse Rock & Jail Rock appear as imposing as any courthouse we’ve ever built. Rising over an ancient plateau, these two historic landmarks tower more than 200 feet over the plain. Two centuries ago they guided early explorers, and later, Oregon Trail colonists, overland to the West. 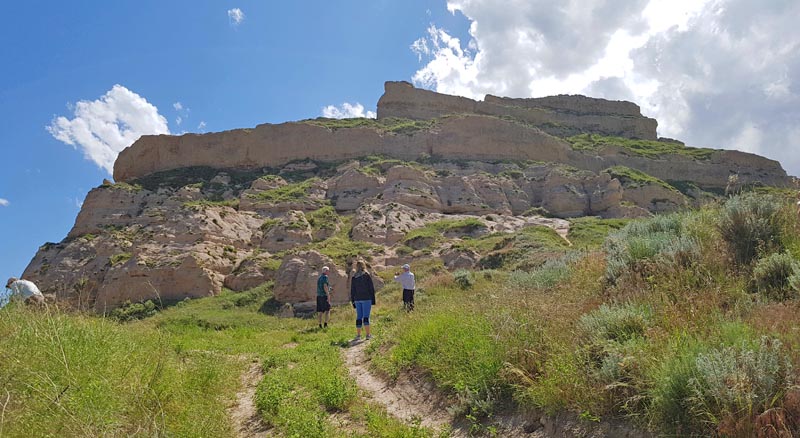 Visible by colonists walking beside their wagons for several days, Courthouse Rock and Jail Rock were important landmarks on the emigrant trail that connected Missouri to Utah and California. Robert Stuart, an early fur trapper and trader, was one of the first to note the landmark as he crossed the Continental Divide and pioneered a trail through Wyoming and Nebraska.

This trail, following the North Platte and Platte rivers, eventually became known as the Oregon Trail. Rufus B. Sage later wrote in 1841 that you could see for forty miles from the top of the formation. He likened it to a castle or courthouse. Some travelers, though, referred to the pair of rocks as the Lonely Tower. The name no doubt reflected how they felt journeying through the hundreds of miles of prairie on their journey west.

The Jail Rock hike starts out easily. A well trod path takes you from a paved staging area two miles south of Bridgeport, NE, on Highway 88, through the prairie. As you pass Courthouse Rock (photo at the top of the page), the climb is gradual.

Even if you don’t hike any higher, you’ll still get a beautiful view from this point. The formations are comprised of Brule clay and Gering sandstone, so make sure you have good hiking shoes. Otherwise, you’ll find yourself sliding down the path instead of going up as you start the steeper ascent up Jail Rock! 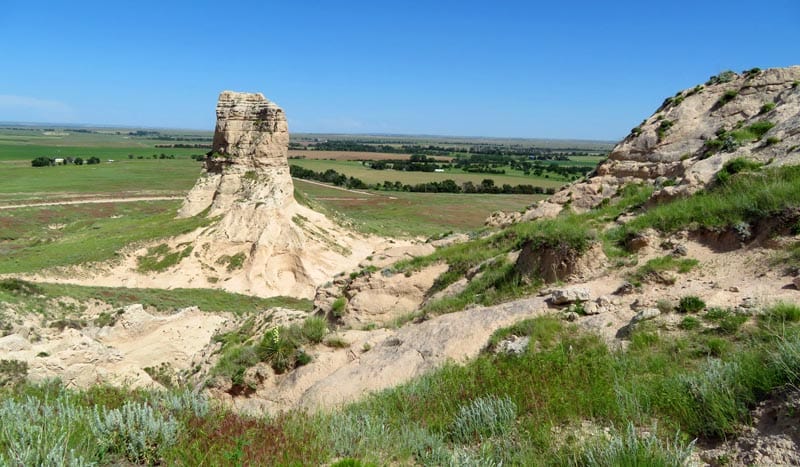 The trail on Jail Rock takes a winding turn, so you get a different view of Courthouse Rock. Here, it’s easy to see how some view the two rocks as part of a single formation, since it’s hard to tell where one stops and the other begins. You might not expect much vegetation, but you’d be wrong.

Winterfat, a native grassland shrub, abounds in the prairie grass. It particularly drew my interest as Agriculture Canada is taking steps to register the plant, so seed can be produced.

And if you’re thinking, like I did, that winterfat looks a lot like sage, that’s because it’s also called winter sage, white sage, feather sage and sweet sage. Winterfat thrives in extreme cold, drought, and well, all those same prairie conditions our hardy ancestors lived through. In addition, it’s high in protein, so has been called ice-cream forage that helps fatten up those cows.

The prairie grasses do dwindle out quickly though as you approach the steepest part of the climb into the rock. It took some scrambling to get to the final rocky plateau–and a few stains on the seat of my shorts–but the view was worth it. 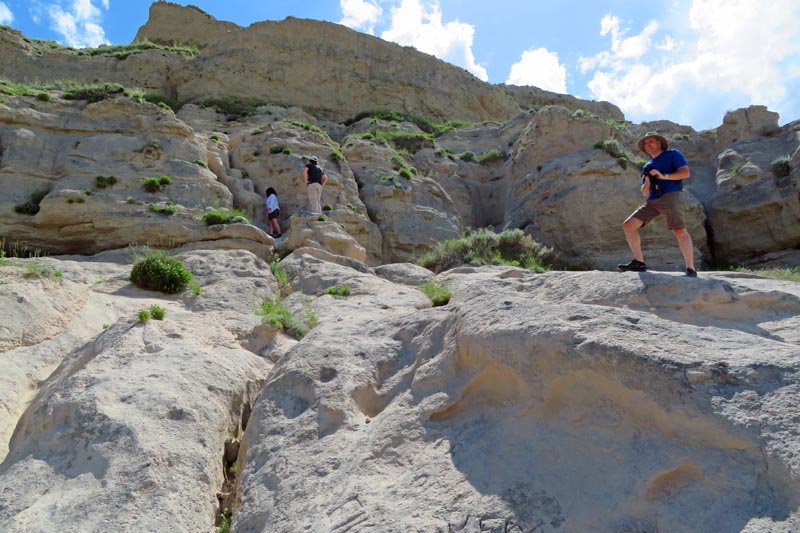 And if you really like a challenge, you can always go a little higher as my friends are above!

Hike Jail Rock on the Historic Oregon Trail in Nebraska

The parking Area for Courthouse Rock and Jail Rock is two miles south of Bridgeport, NE, on Highway 88. You’ll need at least half an hour for the climb. Courthouse Rock & Jail Rock formation is just one great place to hike and explore in the Scottsbluff / Gering area of Northwest Nebraska. For more information, see: https://www.nps.gov/nr/travel/scotts_bluff/list_of_sites.html

Or, you may want to add on some stops in Nebraska when you’re visiting the Black Hills in South Dakota!

I hiked Jail Rock on a visit to Nebraska hosted by the Nebraska Tourism Commission. This part of the trip was with Gering Convention and Visitors Bureau and Scotts Bluff County Area Visitors Bureau. Many thanks to all of my hosts for an incredible week of adventures!

About the Photo: The photo above is of Courthouse Rock, taken from the top of Jail Rock, near Bridgeport, Nebraska, USA.

If you enjoyed this article, please pin it to share. 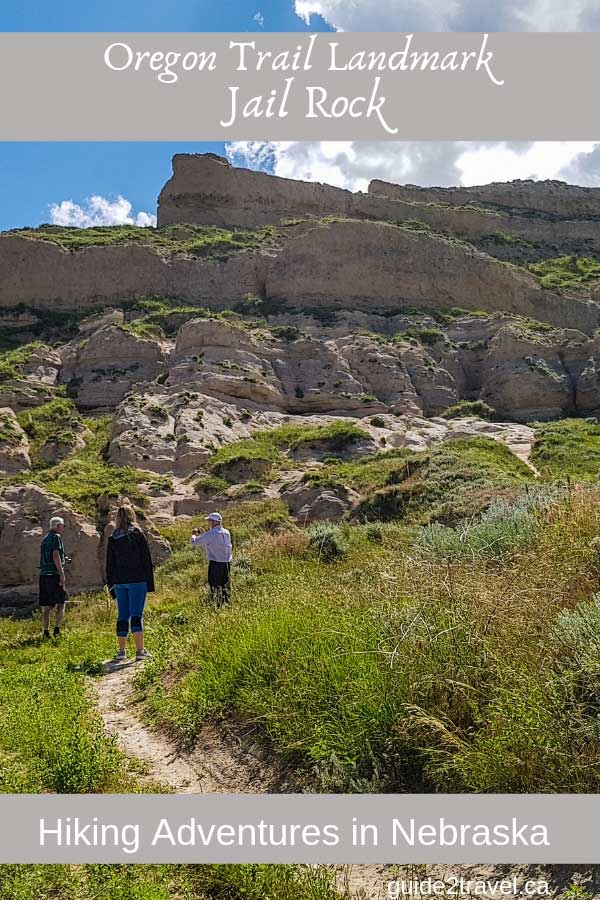 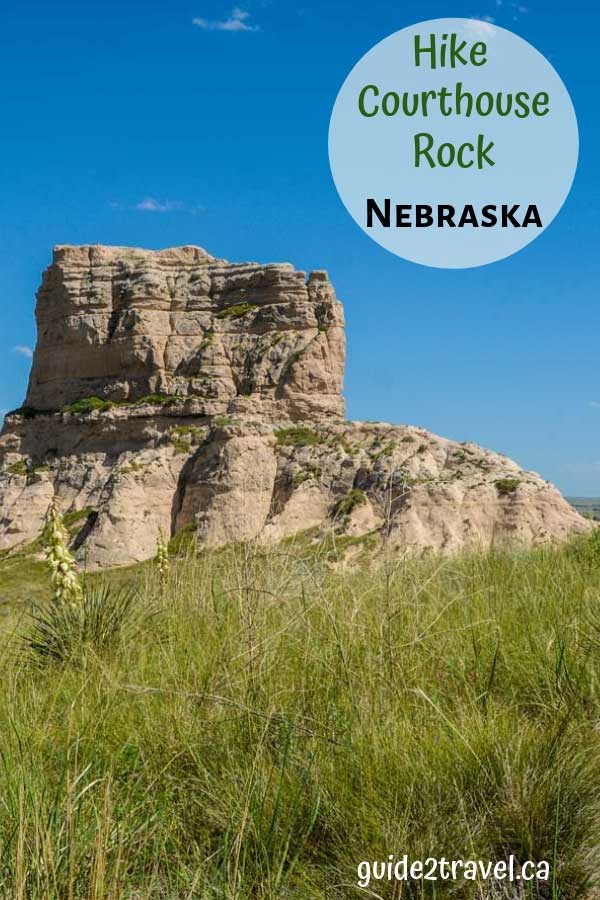 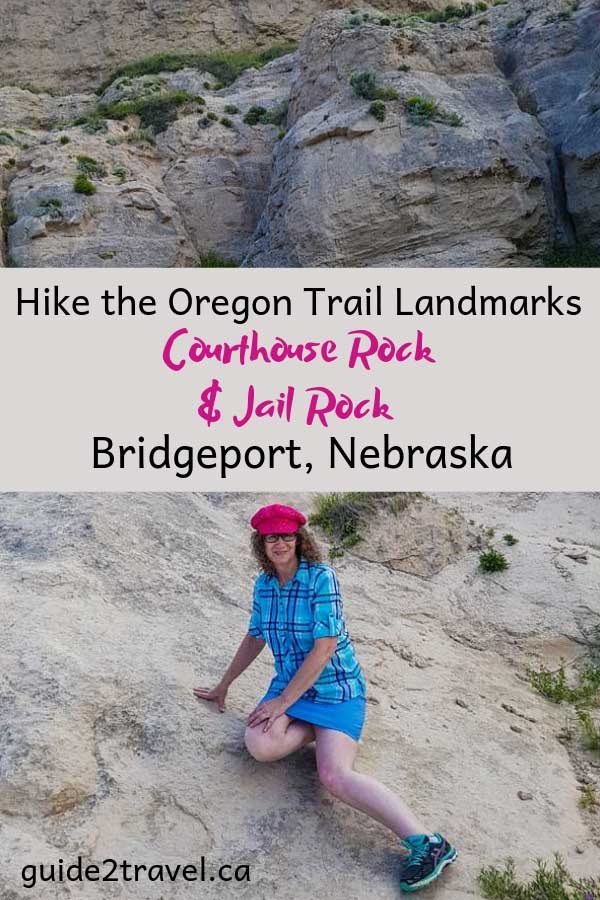