...history with a twist of adventure Latest ArticlesAdventures
;
The Carhenge pop culture roadside attraction may be one of the most popular — and quirky — roadside stops in America, but it didn’t start out with that purpose. In fact, it was built as a tribute to one of the owners of the land where it sits, by his son, Jim Reinders. And the builders were family members who gathered five years after his passing to put it all together.

While I didn’t get an opportunity to see the real Stonehenge in England when I visited, I found my stop at Carhenge fascinating. Like Stonehenge, the cars are aligned (exactly!) to chart the phases of the sun and the moon. Reinders had spent a lot of time in England and studied both the stones and their purpose, so readily combined the information with his artistic skills.

Instead of stones, Reinder used grey-painted cars. Each one is approximately 7 feet wide, the same as Stonehenge’s rocks. It took 38 cars to create a circle 96 feet in diameter with the same proportions. While viewing the cars in their various poses from a distance is fascinating, close up and inside the circle is surreal. 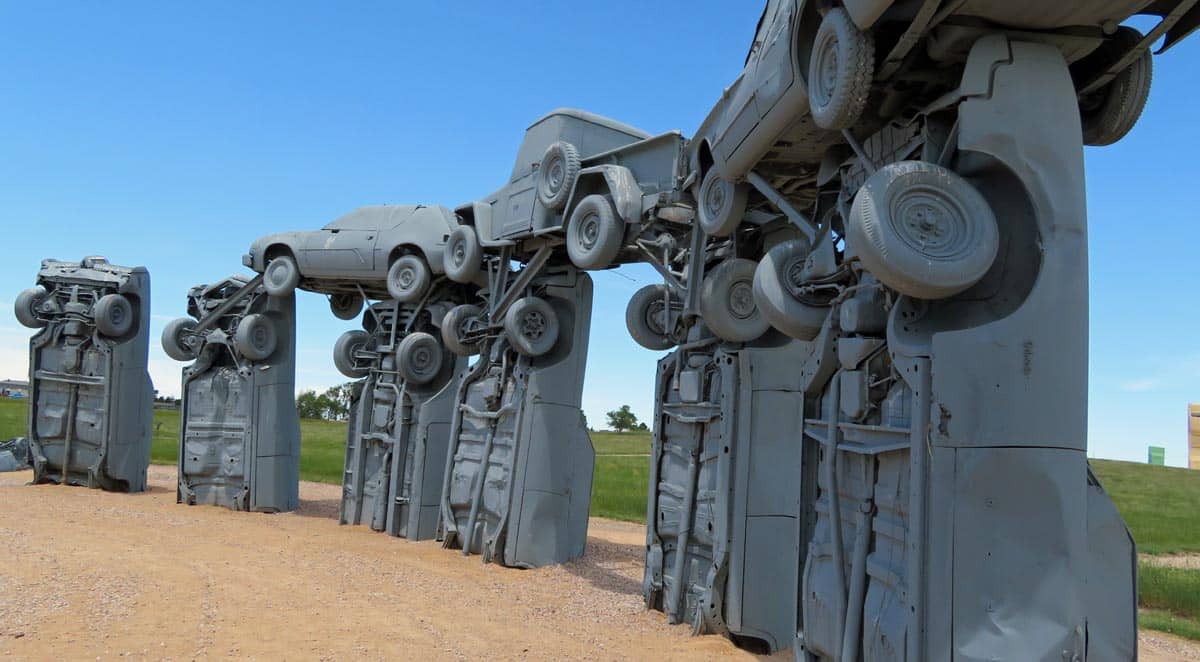 Inside the circle at Carhenge.

What Kind of Cars are in Carhenge?

The cars at Carhenge are primarily from the 1950s and 1960s, which is logical given that it was built in June of 1987. While the map below details the make, model, and year of each one, you’ll find all kinds of unique vehicles from a 1951 Willys Jeep to a 1975 Gremlin to a 1967 Cadillac DeVille Ambulance!

In order to replicate the stones in England, some of the cars are partially buried. Others are welded and braced in place. For the 35 who gathered to do the work, it was an enormous achievement. 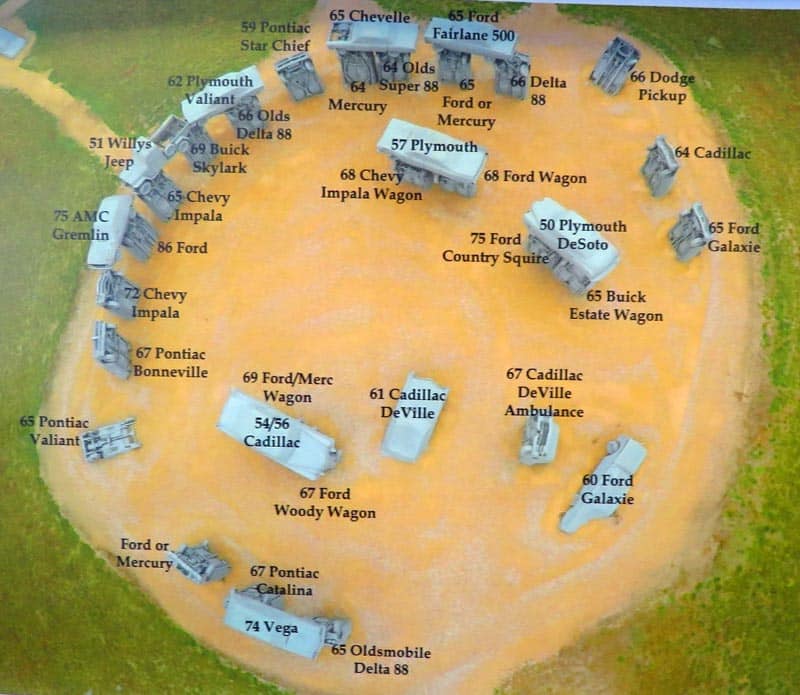 Map of the cars at Carhenge in Alliance, Nebraska.

Carhenge was dedicated on the Summer Solstice in 1987, with champagne, poetry, songs and a play written by the family. But that wasn’t the end of development on the site.

The newer constructions are made by various artists. I loved Reinder’s Fourd seasons — the series of green, gold, and light colored cars at the end in the photo below. It was inspired by Vivaldi’s Four Seasons and represent Nebraska’s seasonal changes on the plains where it sits: the wheat is planted, grows, matures and then the land lies barren during the winter storms.

Another piece of artwork, called Spawning Salmon, was created by Canadian artist, Geoff Sandhurst. He earned his place in the Reserve by winning a contest. 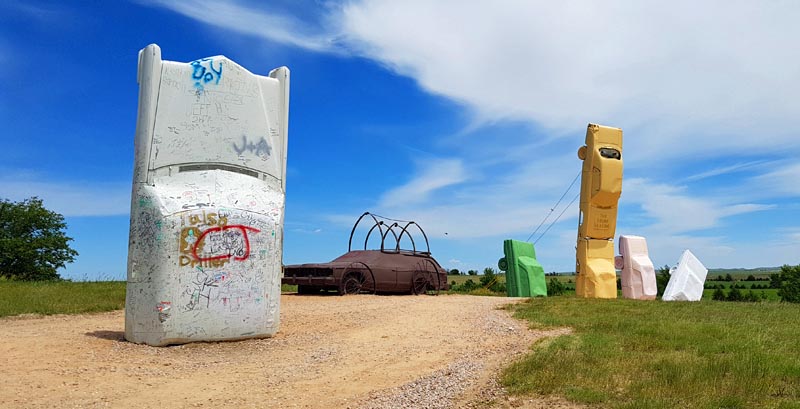 Row of new additions at Carhenge.

The car in the photo below carries the epitaph: Here lie three bones of foreign cars. They served their purpose while Detroit slept. Now Detroit is awake and America’s great! 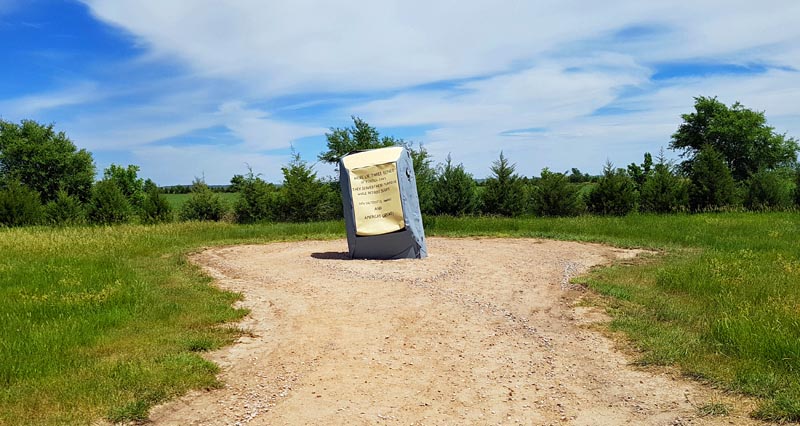 Today, there’s a gift shop that sells a variety of items, plus cold drinks, located beside Carhenge. The parking lot is large and the art exhibition is free.

I stopped at Carhenge on a visit to Nebraska hosted by the Nebraska Tourism Commission. This part of the trip was with Alliance Visitors Bureau. Many thanks to all of my hosts for an incredible week of adventures! While my trip was hosted, I retain full editorial control of all articles I publish.

The photo in the header above was taken by Linda Aksomitis at the Carhenge roadside stop in Alliance, Nebraska, USA. 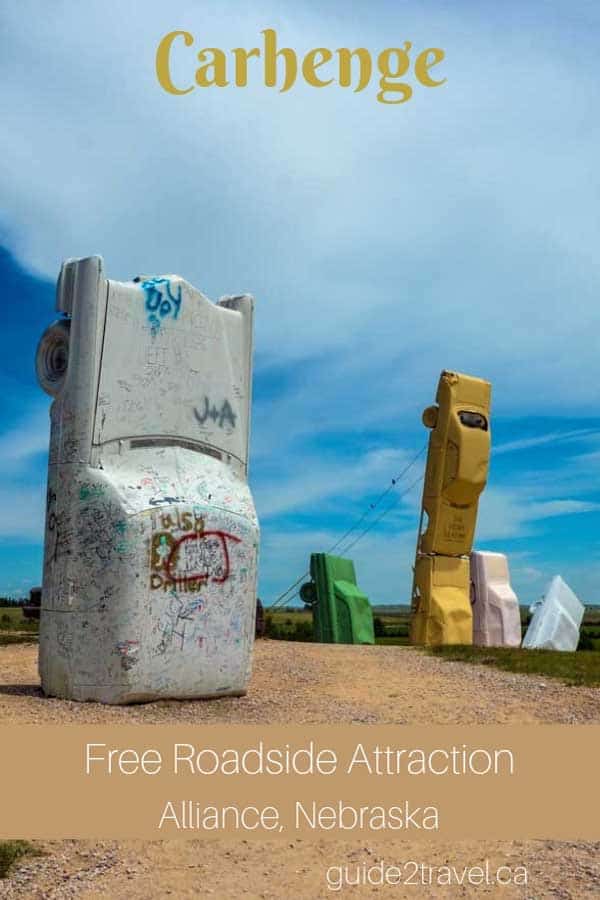 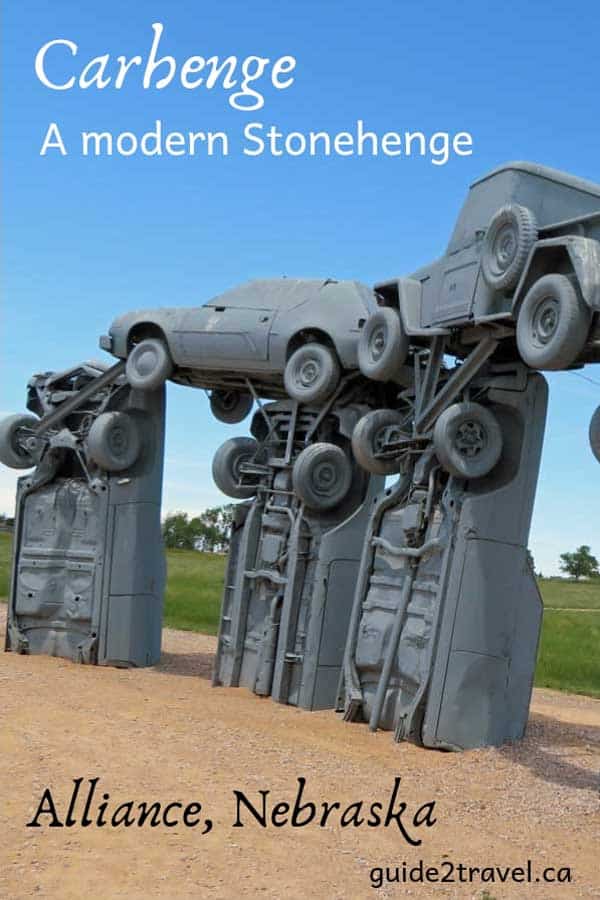 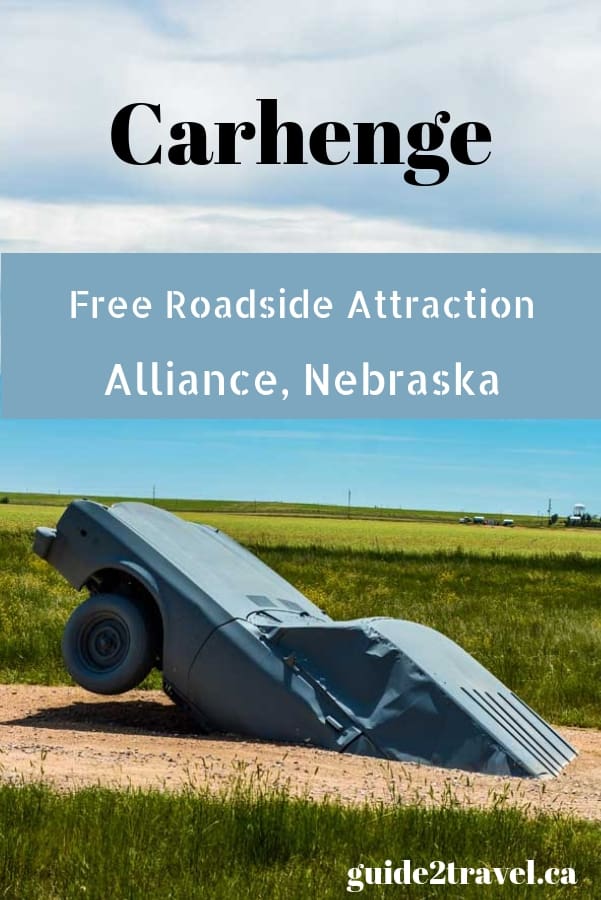