Vasa, the warship that sank in Stockholm's harbor in 1628 without ever sailing out to sea.

The story of the Vasa warship is one of the most fascinating to ever rise from the sea. In fact, 333 years after it sank, the enormous warship became a Swedish National celebrity as it once again saw the sun.

Vasa’s story began in 1625, when The Lion of the North, Sweden’s King, Gustav II Adolf, contracted with Dutch master shipwright, Henrik Hybertsson and his business partner, Arendt de Groote to build the mighty warship. Gustav II Adolf, already one of Europe’s most feared powers, had even bigger plans for the future.

The ship, however, never made it out to sea at all. Instead, it sank, all 64 cannons never fired. Now, it’s the focal point of its own museum — the Vasa Museum. 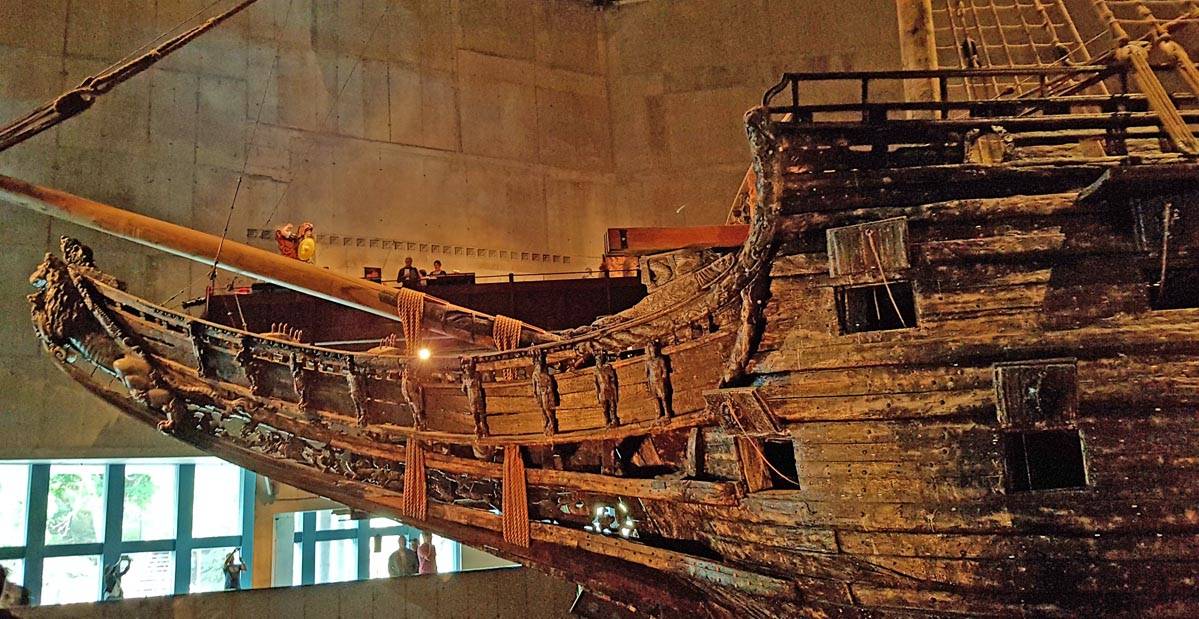 The Vasa was built in Skeppsgården, the navy yard, which was a peninsula connected to the mainland by a wooden bridge. You can see the replica of the shipyard in the photo above.

Launch day, August 10, 1628, started with a church service and festivities to celebrate. However, it wasn’t long before the disaster that took 30 lives of those trapped inside the ship.

Trivia Question: How far did the VASA sail before it sank? (Find out the answer by clicking or tapping the tab above, Vasa’s Maiden Voyage.) 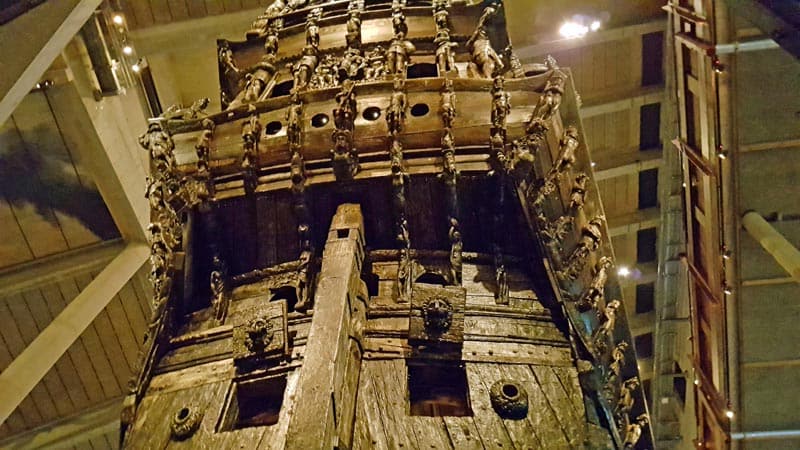 VASA, the Swedish warship that sank.

What caused the Vasa to sink? Well, there was a light South wind that day. So, the ship was towed along the shore by cables to end of the city island — the spot is now known as Slussen.

When the first four of the ten sails were raised, there wasn’t enough wind to fill them, so the ship drifted on the current. A small gust came along, as so often happens on a summer’s day. The ship heeled to port in response…but recovered.

Then, as the ship slid past the bluffs at Tegelviken, a much stronger gust pushed it over on its port side. Water poured in through the open gunports and the mighty guns soon submerged on the lower gundeck.

The Vasa began to sink. Of the hundreds of dignitaries, sailors, and their guests on board, only 30 were lost to sea. Luckily, the many small ships that had joined the ship to celebrate its sailing, were nearby to retrieve people from the water.

An inquest somewhat later concluded that the ship had too little belly, and not enough hull to carry the heavy upper works. Since the shipbuilder had already died, nobody was ever punished for is failure.

This YouTube video shows you the Vasa as it was found and pulled out of the sea some 333 years later. 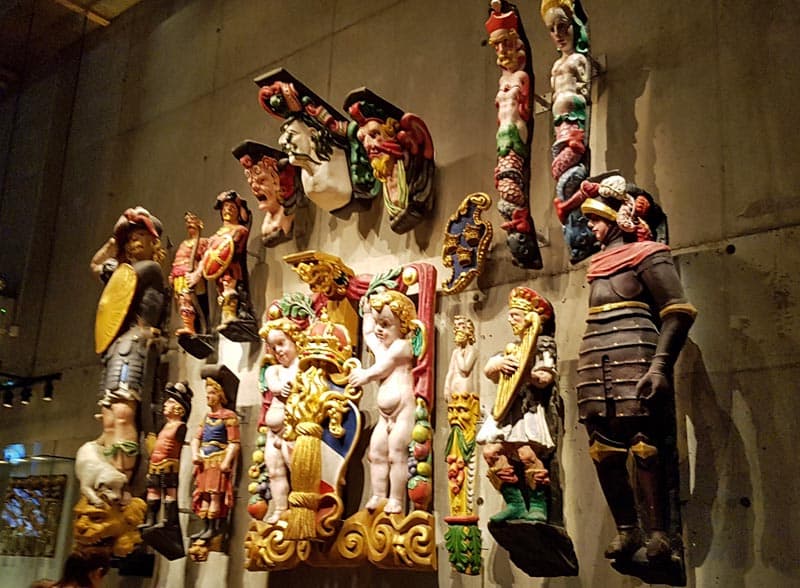 Sea farers attempted to find the Vasa and its contents for centuries. Even at the time, salvage seemed impossible as the ship was firmly sunk in the mud at the bottom of the harbor. It took 35 years until a team of divers were able to retrieve most of Vasa’s cannons from their watery grave using a diving bell.

To learn more about the Vasa’s history, check out the Vasa timeline on the Museum’s website.

It wasn’t until 1956 that Anders Franzén identified the spot where the ship rested. He convinced a navy diving team to begin an investigation. However, it took until August 20, 1959, for the Vasa to be wiggled loose from its muddy casket.

On Monday, April 24, 1961, the Vasa was pulled to the surface while a crowd of thousands watched.

The first visitors saw the mighty ship at the newly-constructed Wasa Shipyard in February 1961. Two of Vasa’s cannons fired a salute to celebrate!

In 1962, 439,300 people purchased tickets to see the ship and its treasures. Preservation efforts on the Vasa took decades, and eventually it became the centerpiece of the new museum that covers all aspects of early 17th century naval life.

Visit the Vasa at Galärvarvsvägen 14 in Stockholm.

Check out the website with full, detailed history of the ship, its retrieval and restoration, and museum visiting hours and costs at: http://www.vasamuseet.se/en

We used the hop-on-hop-off bus and boat service to get to the museum from our hotel, the  Radisson Blu.

The photo in the header at the top of the page is a scale replica of Stockholm’s shipyards in the  spring of 1627, when the Vasa was raised on her bed of supports ready to be launched. The replica is in the Vasa Museum in Stockholm.

David Aksomitis beside the warship in the Vasa Museum in Stockholm.

More Things To Do In Sweden 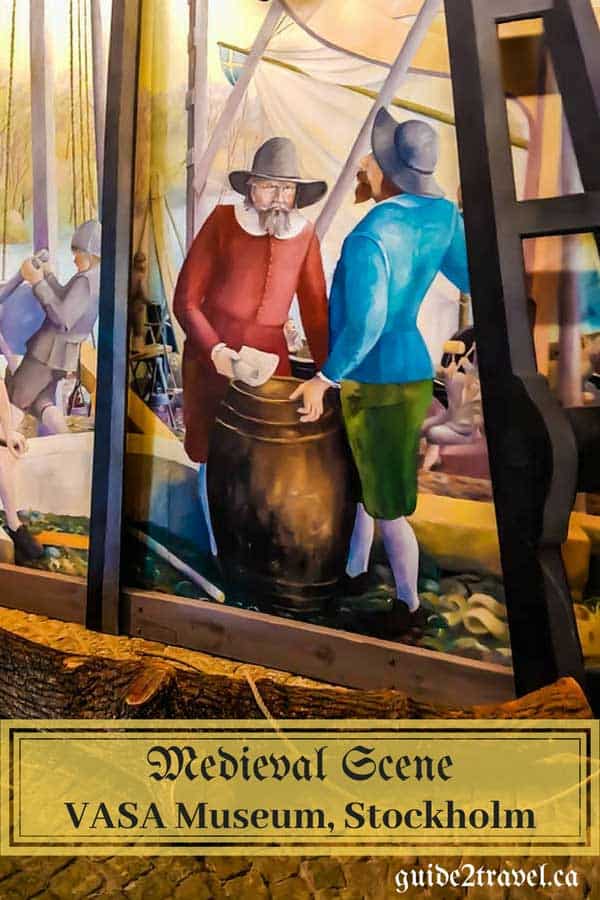 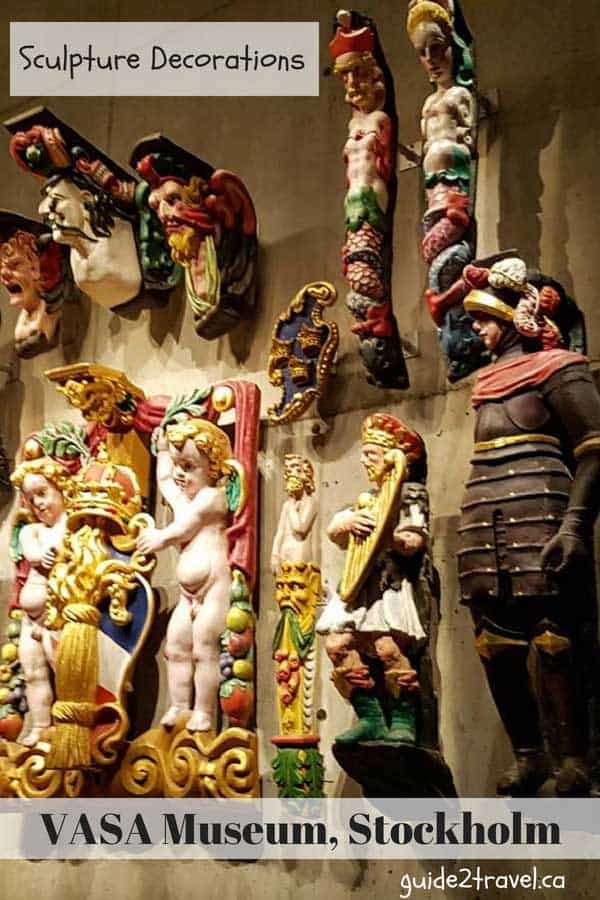