...travel adventures with a twist of history
;

World War II started on September 1, 1939, when Hitler invaded Poland. The battle was short. In a matter of days he defeated Poland, and within a few months he had converted the former Polish military base at Oswiecim (near Krakow) into the Auschwitz Concentration Camp. Over the next five years, 1.3 million people would arrive there by cattle cars like the one above. Over a million of them would be murdered.

Now, 60+ years after the end of WWII, over a million people visit Auschwitz annually. They go for many reasons. We visited because of David’s long-time interest in the war. Me, I like to explore the past, to get a better understanding of the present.

But visiting Auschwitz-Birkenau is an experience that defies understanding.

No Hope For Escape at Auschwitz Concentration Camp 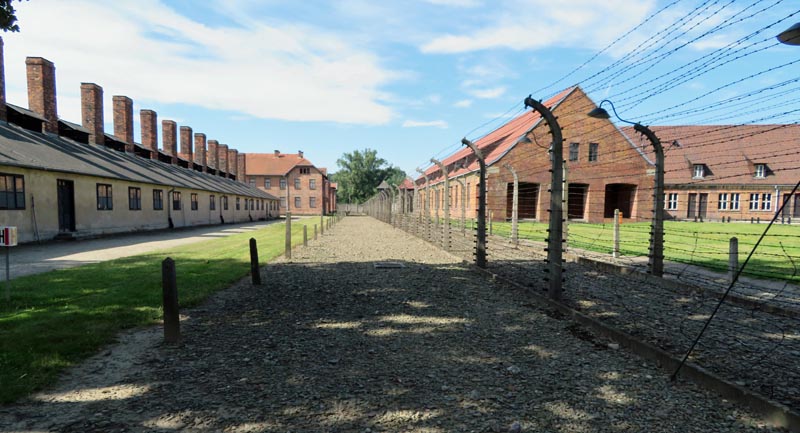 The Auschwitz Concentration Camp was established in these former Polish Barracks in June, 1940.

The main entrance at Aushwitz read, “Arbeit Macht Frei” (work will give you freedom). It gave prisoners hope — at least to start — that life would go on.

Not that escape was possible.

Auschwitz and Berkenau were both surrounded by double barbed wire, four meter high, electric fences, plus watch towers. If you’re like me, the first thing you see, when you arrive, may be those electrical resistors and the long, taut wires that seem ready to snap. 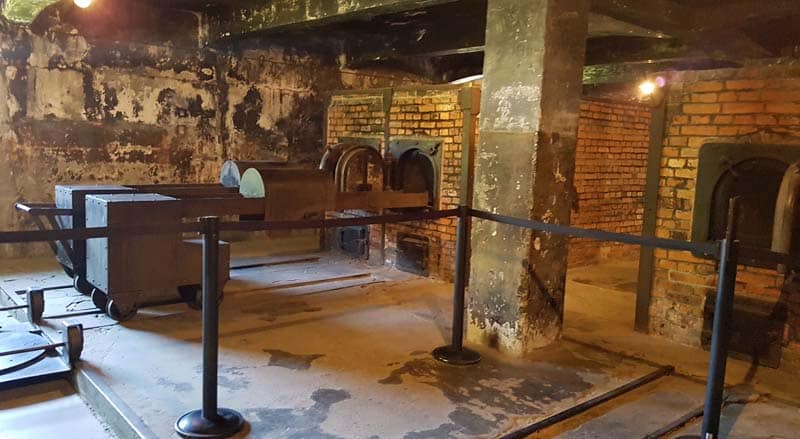 In the beginning, June 1940, Auschwitz was a prison camp. The first prisoners were political enemies, Poles captured by the SS in the takeover of Poland. Over the years, various other minorities were also held prisoner including Jehovah’s Witness believers, Soviet POWs, homosexuals and others.

Between 1940 and 1942, prisoners died of abuse, torture, and deliberately inhuman conditions. The first crematoriums merely disposed of bodies when the prisoners died.

As the SS became more aggressive, the purpose of Auschwitz and the newly built secondary camps (Birkenau and Monowitz) changed. From 1942 to October 1944, the camp continued as a concentration camp for prisoners of various ethnic backgrounds (from mid-1942 mainly Jews, Poles, and Gypsies), and as the largest center for the immediate, mass killing of Jews. 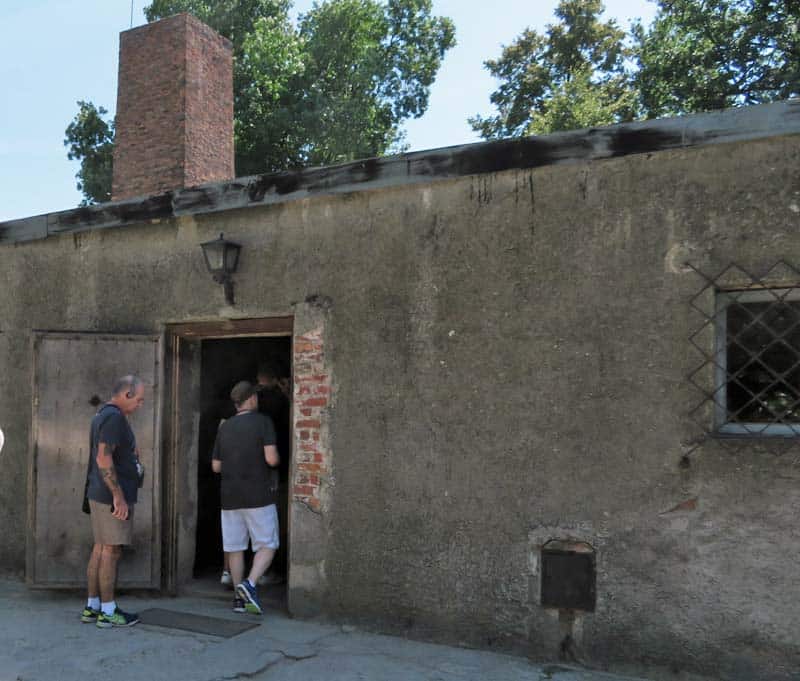 Originally a munitions bunker this building was reconstructed with original materials, including the chimney — it was a makeshift gas chamber.

About 90% of the Auschwitz deaths happened in Birkenau. 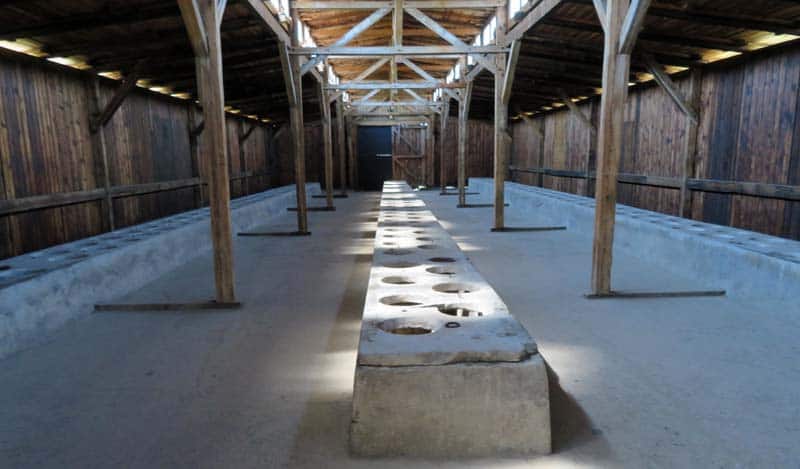 My visit to Birkenau, the second part of the camp, provided a glimpse of life for those held prisoner by the SS. If ever there was hell on earth, this was it. At its peak, 200,000 people crammed into barracks designed like horse stables. Eight hundred people lived in a place meant for 52 horses.

While the barracks changed over time, none ever provided anything remotely close to livable conditions. Crowded, filthy, penned like cattle or worse, illness ran rampant among those left living.

This public latrine, toilet hole after toilet hole cut into the rough board bench, makes it vividly clear what prisoners endured. 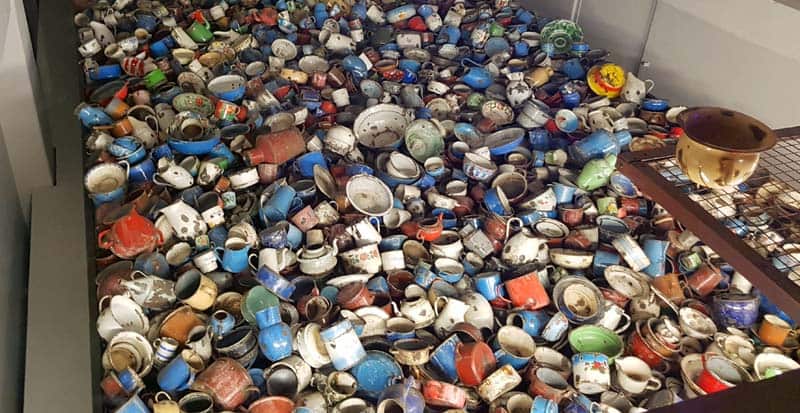 Dishes that belonged to the Jewish prisoners sent to Auschwitz.

In Auschwitz, as the Nazis realized they were losing the war, they tried to destroy what evidence they could of the atrocities committed on its grounds. They dynamited the brick crematoriums. They dismantled the gas chambers.

So, by the time the Soviet Army arrived on January 27, 1945, many parts of the camp, particularly Birkenau, were just rubble. 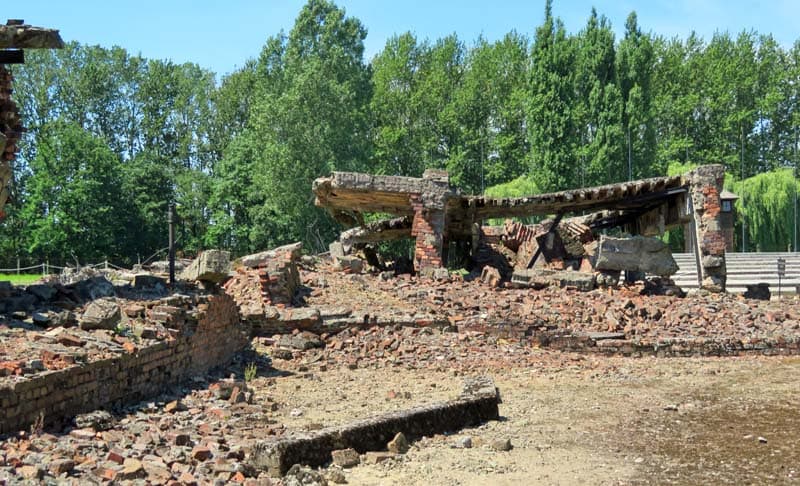 The buildings and gas chambers at Birkenau are crumbling remains.

However, tin coffee cups and porridge bowls aren’t quite so easy to destroy or silence.

I can imagine as the Jewish families gathered their meager belongings, picking and choosing between the things they’d need most, how feeding their children and their elders and their loved ones would have been their biggest worry. And so, they brought their dishes. They brought their hope for a future that was ultimatedly denied to them.

The story’s end could have been very different, if they’d realized they would’t need coffee cups or porridge bowls where they were going.

The Whole is Greater Than the Sum of its Parts 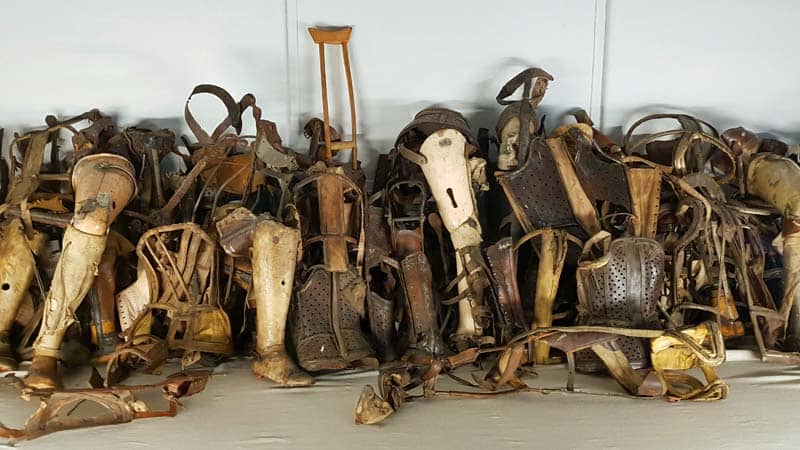 Possessions of the Jewish prisoners sent to Auschwitz.

We are so much more than bones and blood, more than limbs and appendages, even if those limbs are molded of leather and shaped with wood. It seems a contradiction to destroy the person, but to keep the prosthetic. However, that’s what happened in Auschwitz.

Staring at Auschwitz’s prosthetic collection made me shiver, the way a horror movie does. How coud a regime value things, when it didn’t value life?

I found the prosthetics, such personal things belonging to those who met their deaths, difficult to view. However, it’s even more horrific to think about the two tons of hair on display, all shaved from the heads of the dead.

Indeed, the hair of the murdered was reportedly used in the production of German thread, rope, cloth, carpets, mattress stuffing, lining stiffeners for uniforms, socks for submarine crews, even felt insulators for the boots of railroad workers.

It was, however, hair that helped convict the guilty. Hair with traces of cyanide, particularly zyklon, the gas most used by the Nazis, provided indisputable evidence that the Jews had been gassed. So, while hair may have helped provide for the Nazis war engine, it also helped convict the guilty, like Rudolf Hess, the former commandant at Auschwitz, who ran the camps. 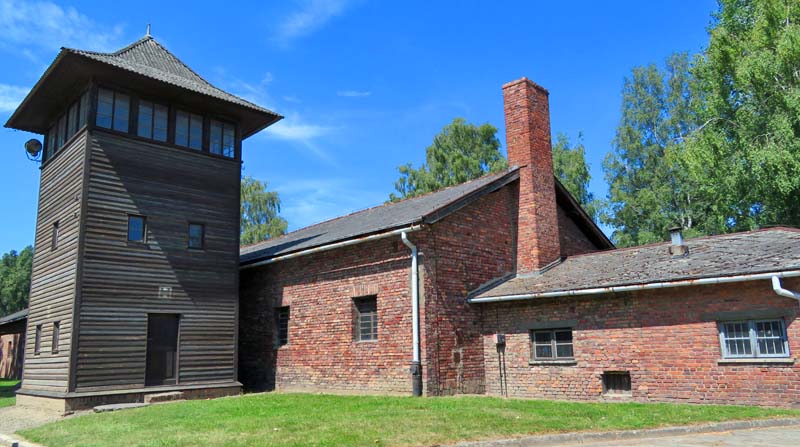 We visited Auschwitz on a bus tour, since that seemed the easiest way. I’ll be the first to tell you, though, that it’s far from the best option. I had hoped for a good introduction to the site on the hour-long bus ride, however, what we got was videos that David had already watched a number of times on t.v.

Upon arrival, our guide divided us into two groups and handed out headsets. They turned out to be particularly useful — not to listen to her, but to be able to guage which of the dozens of tour groups we were supposed to be with. After all, that was our ride back.

After that, it was elbow-to-elbow with hundreds of visitors parading in single file through the main buildings. While I can’t speak to what others heard through their headsets, all we got was whatever we could have read for ourselves (signs were in English as well as German) from the wall signs.

It didn’t take long until we tired of that! Since all the guides skipped a lot of the buildings, those ones were virtually empty. And it was far easier to view the exhibits in the main buildings once the guided groups had passed through.

My suggestion is to get a private tour (we saw a few groups with two or three people and a guide), rent a car, or take public transit (this article outlines your options). That will give you freedom to stay as long in the sections as you wish, rather than being hurried on to make room for the next line-up of visitors.

However, being on the tour bus at Birkenau really wasn’t an issue, as fewer people took the full tour. While many skip Birkenau, we preferred it over Auschwitz. It gave us the ability to walk among the ruins…and reflect on the train track to nowhere.

Below, you’ll find a map from the hotel we stayed in, the Aparthotel Maly Krakow (inexpensive and comfortable, although it has no air conditioning) to Auschwitz-Birkenau.

More Things to Do in Poland

The photo in the header above was taken at Birkenau, a division of the Auschwitz Concentration Camp near Krakow, Poland. 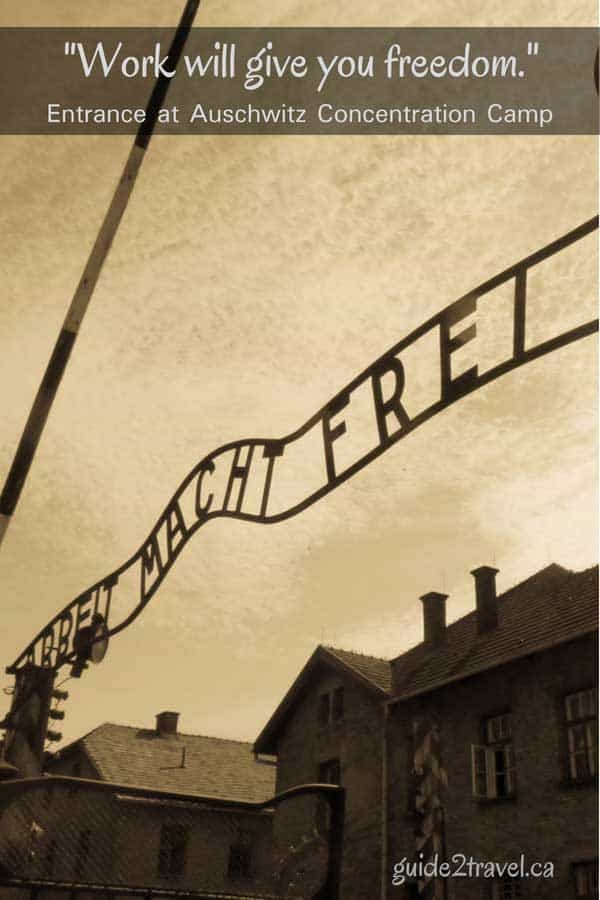 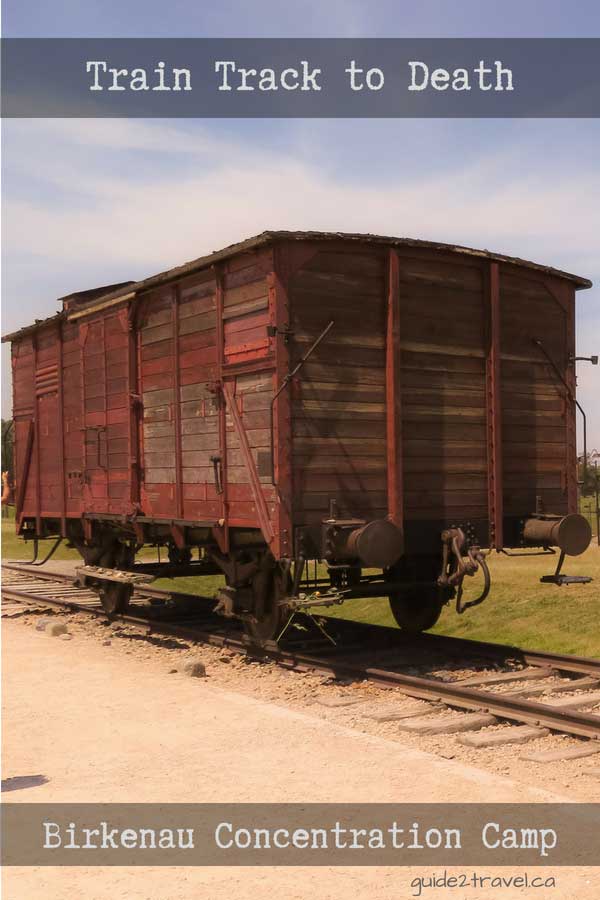 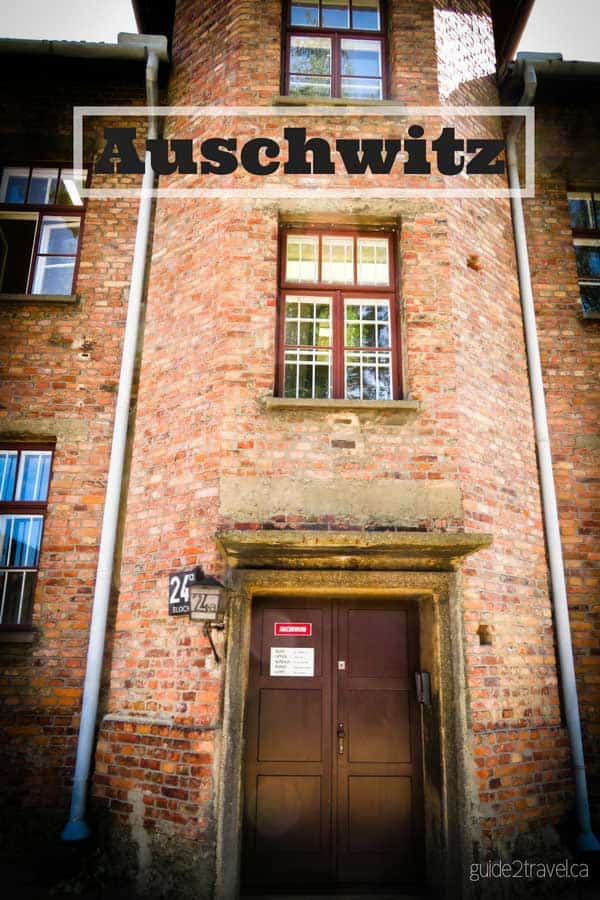 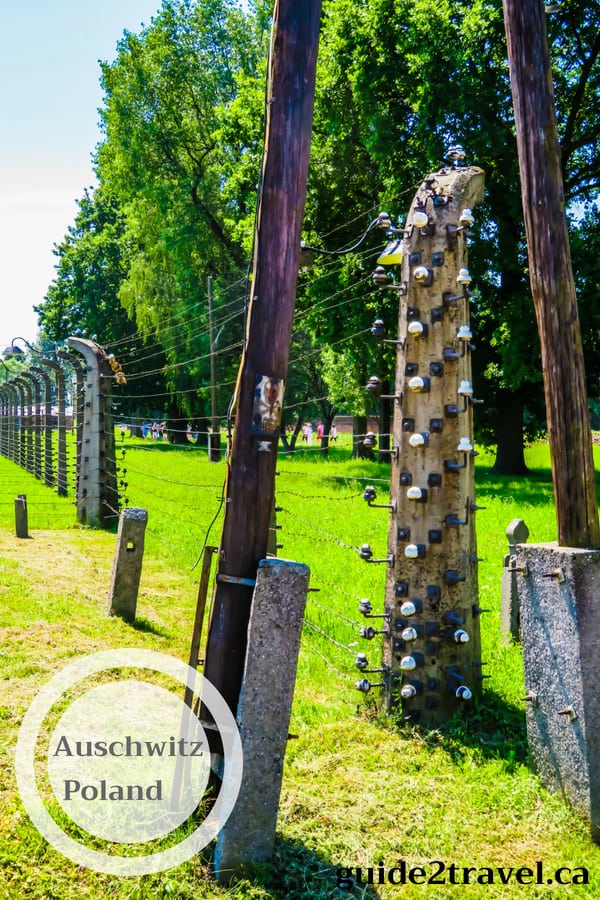