More than sixty years ago, in September of 1953, a handful of innovators attended the first Experimental Aircraft Association (EAA) fly-in with their aircraft. They shared two main things: their passion for flight and their skills at creating revolutionary airplane designs.

Now, that event is a celebration of flying that makes the air control tower at Oshkosh, Wisconsin, airport the busiest in the world for a week each summer. Luckily for visitors, the EAA also established the EAA Aviation Museum, which is open year-round, to showcase the wonderful world of flying.

We visited quite by accident on a road trip we took to see snowmobile museums through Wisconsin and Michigan. In fact, we were just cruising down Interstate 94 (I-94) when we saw a sign that said the Oshkosh turn was 20 or so miles ahead. Since we have a friend who often attends the EAA AirVenture Oshkosh fly-in, we knew it was a big airplane community. And, as I said to David, that likely meant there was a pretty good museum there too.

I checked the Web, found the museum address, and plugged it into the GPS. What we found went well past “good” and well onto fantastic! 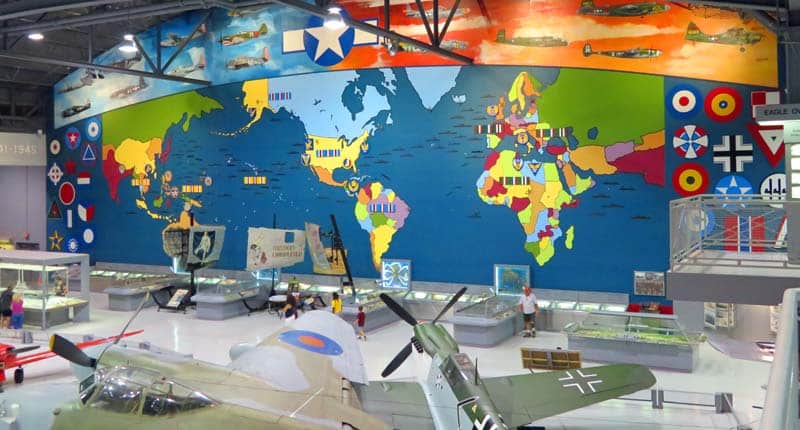 We always find machinery of the past fascinating. David studies the technology and I look for the stories of the people who created, built and used the machines. And the EAA Aviation Museum provided a rich hunting ground for both of us.

The museum has nearly 200 airplanes that range from homebuilts, the original focus of the organization, to air racing and aerobatics (we’re always there for the speed!), to their innovations gallery. We found the museum’s key strength, though, in the amount of information provided with each artifact in the collection.

Indeed, their library has more than 100,000 images of the aircraft and the people who flew them. It also includes 11,000 books, various magazines, journals, and manuals.

With such a large collection, it’s often difficult to pick a favorite. However, these were some of ours.

David, of course, always heads straight for the motors. The photo below shows a few of them. 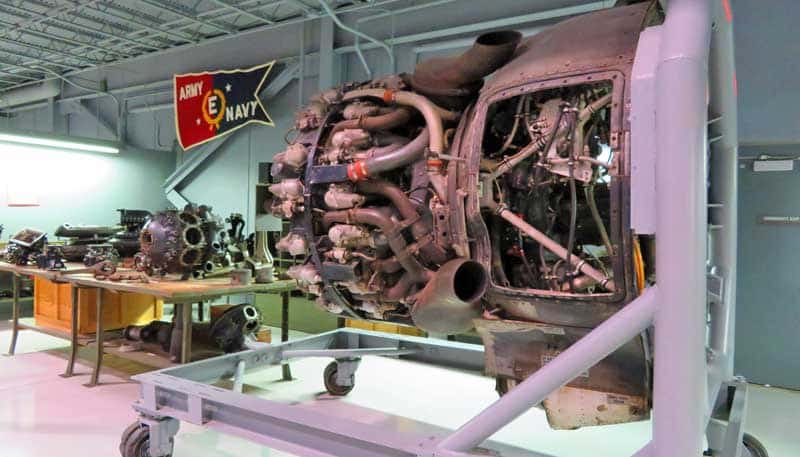 In addition to motors, many of the technological highlights are illustrated in the museum. There’s a cutaway of a plane named the Blue Bird (built by C. L. McHolland) that shows the inner workings of an amateur-built aerobatic biplane with oil and fuel systems capable of inverted flight.

Another plane, named Woodstock by its builder (Andy Keech), set three transcontinental records. It’s one of only two airplanes to hold records in all parameters in performance flight: speed, distance, climb, and altitude. 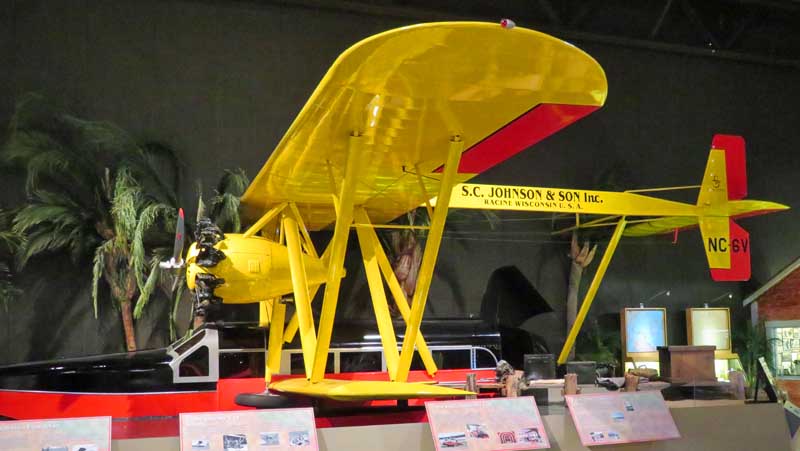 S-38 airplane at the EAA Aviation Museum in Oshkosh, WI

And for me, I found the Johnson Expedition story of this replica S-38 airplane fascinating. The “Johnson” here, was H. F. Johnson who owned Johnson Wax. He took an expedition into the jungles of Brazil looking for — you guessed it — something related to wax, the carnauba palm. Why? The carnauba leaves provide the finest natural wax in the world! 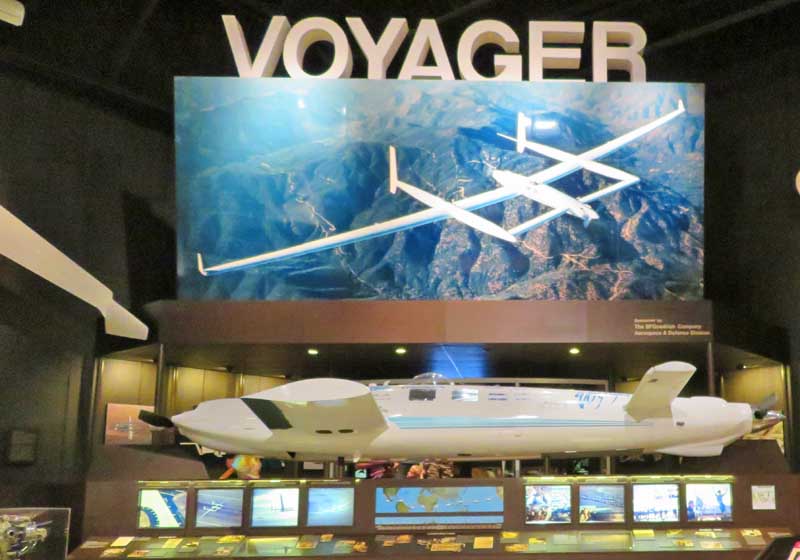 The Voyager story also caught my attention, perhaps because a woman, Jeana Yeager, was involved. The plane, built by Yeager and the second pilot, Dick Rutan, took 18-months to build. They were using lightweight graphite-honeycomb composite materials and a design by Dick’s brother, Burt Rutan. The Rutan Voyager left December 14, 1986, from Edwards AFB in California. Then, it flew without stopping, or refueling, around the world. The record setting flight took almost exactly nine days to return back to Edwards AFB.

In additional to airplanes, the EAA Aviation Museum has many other artifacts. A number of them are military vehicles from World War II, such as a 1942 Army Staff Car. Many are small memorabilia including things like a variety of cans of Johnson’s waxes (for planes) from various eras. There’s even the original converted chicken coop/writing office of aviator/author, Ernest K. Gann.

Like other museums, the EAA Aviation Museum has related machinery of the past displays from other places. Both David and I were thrilled to see this visiting recreation of a 1938 Bugatti Aerolithe! 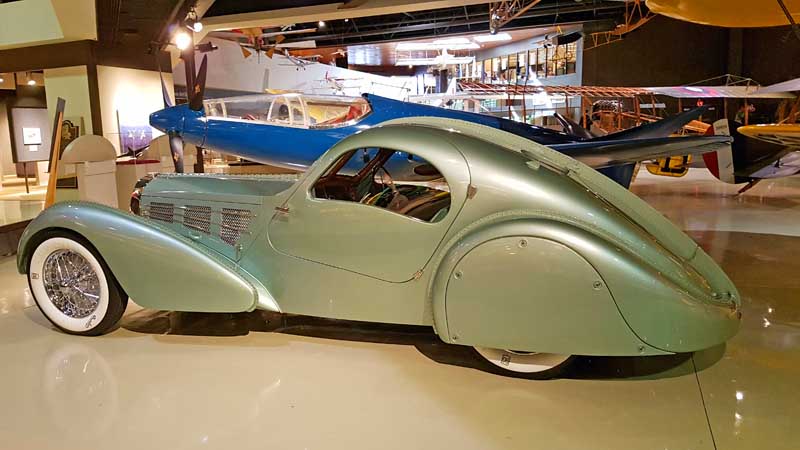 As Canadians we’ve taken road trips through Wisconsin for years as we head south to explore. Recently, though, we’ve discovered lots of reasons to stop and spend a day or two along the way. This museum is a good one.

Find visiting hours and admission fees at this year-round attraction at: https://www.eaa.org/en/eaa-museum/visitor-information

More Things to Do in Wisconsin on Your Next Road Trip

"Yo ho," yelled the lumberjack, rolling the sound out like an echo vibrating through a canyon. "Yo ho," a few hundred kids shouted back with as much enthusiasm as you'd expect at the midway on Fair Day. That took me by surprise, as even though I'd grown up...
Read More

Towering over the museum grounds, the National Freshwater Fishing Hall of Fame and Museum's giant four-and-a-half stories tall muskie is called a "shrine to anglers." For visitors, like me, to Hayward, WI, it's an amazing conglomeration of concrete, steel,...
Read More

The Snowmobile Racing Hall of Fame and Museum is one of our favorite stops in Wisconsin. Mind you it doesn't hurt that St. Germain, where it's located, is smack in the middle of snowmobile country where the sports of snowmobiling and snowmobile racing were born some...
Read More

The photo in the header above was taken at the EAA Aviation Museum in Oshkosh, Wisconsin. 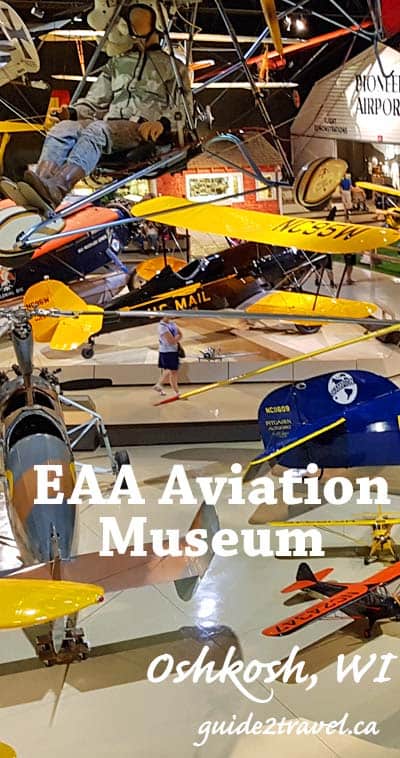