Discover the Vineyards and Wineries of Missouri

Rebirth of one of the Nation's Earliest Wine Industries
;

Wine has been popular for centuries — it’s even been called the nectar of the Gods. Not surprisingly, the wine industry got off to a good start in the U.S. as the country was settled. In fact, the Department of Agriculture reported in 1880 that the state of California produced more than 13.5 million gallons of wine annually.

While that may not surprise you, the fact that the number 2 wine producer in the U.S. was Missouri, at nearly two million gallons produced a year, likely will. Sadly though, while in 2012 California still held top spot (542+ million gallons!) — Missouri was a long ways from #2.

Missouri’s early rise as a wine-producer came from two factors.

As more farmers arrived, more grapes were cultivated. More fine wines were bottled. Everything was going so well that 48 Missouri counties with 100+ wineries produced wine by 1920.

And in 1920, of course, the flow of spirits and beer and wine halted. Prohibition stopped alcohol producers in their tracks. All those bottles of wine ended up flowing downstream in rivers as government agents closed down the industry.

Only one Missouri winery survived producing alcoholic wine. Which one? The St. Louis winery, St. Stanislaus Novitiate, owned by the Jesuits. Under prohibition laws, they continued to produce sacramental wine legally. 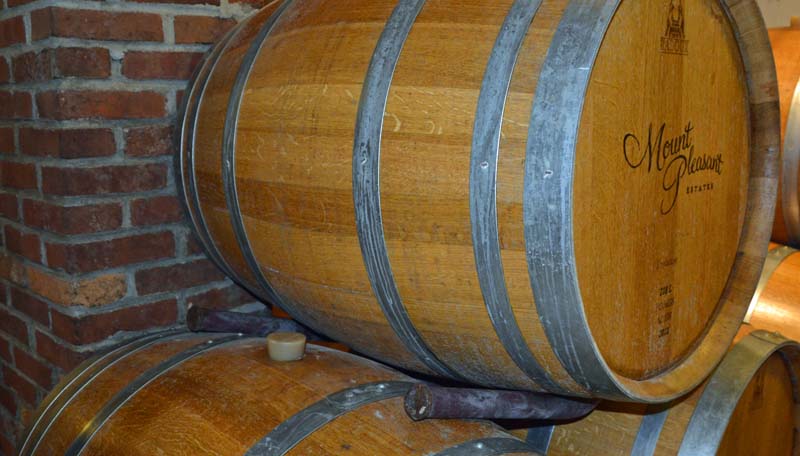 My tour of Missouri wineries introduced me to a number of amazing communities and businesses. To say they’re passionate about their wine making is an understatement.

And if it’s passion and dedication to wine growing, you’re looking for, I’d suggest you make your first stop, Hermann, Missouri. This small community currently sells 200,000 gallons of wine yearly. That’s about one-third of the state’s total production!

Settled by German farmers, the town of Hermann held its first Weinfest in 1848. Indeed, by the end of the 1800s, Hermann was one of the world’s largest wine producing areas. In 1904 the area produced nearly three million gallons of wine from the 11,000 acres of hilly vineyards.

Indeed, Stone Hill Winery, at that time the second largest winery in the U.S., had already won World’s Fair Gold Medals for its wines in Vienna. But Stone Hill, like other wineries around the country, watched as government agents dumped its wines and ripped out its vines when prohibition hit.

While it took awhile, Stone Hill Winery eventually led the way into a wine-making renaissance. Today’s owners, Jim and Betty Held, began making wine at Stone Hill again 30 years after the repeal of Prohibition. Today, Missouri has nearly 90 wineries and a state-funded Grape and Wine program at the University of Missouri.

Of all the communities I visited on my wine tour, Hermann readily emerged as my favorite. From the historic main street (100 buildings on the National Record of Historic Places) to its historic bed & breakfast places to stay, there was just so much to experience. And of course, wine to taste! 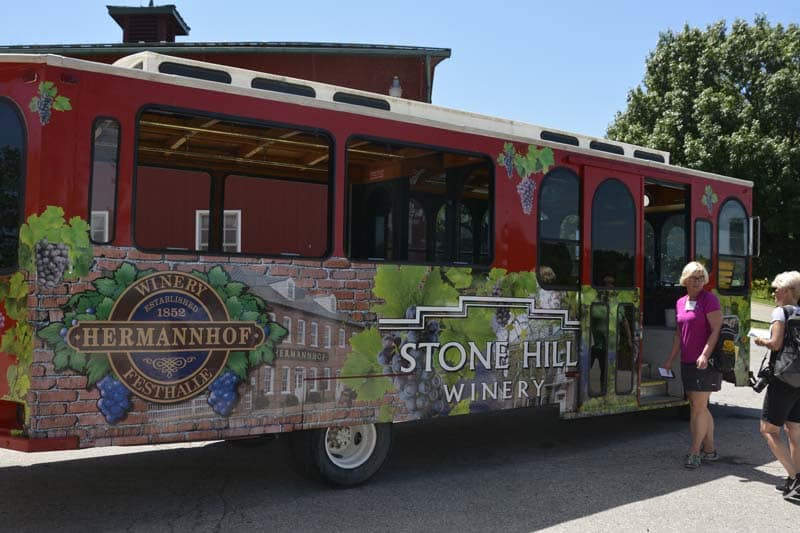 The great thing about Hermann’s wineries is that seven family-owned wineries have all got together to create the Hermann Wine Trail. It follows the Missouri River for 20 miles between Hermann and New Haven, taking you through that rich Menfro silt loam soil with its acres and acres of vines.

And following the wine trail couldn’t be easier, since a number of low-cost trolleys take you from place to place. As they say on the Hermann Trolley website, fun is just a trolley away.

I loved my trolley rides and appreciated the opportunity to enjoy the wine tasting rooms without worrying about the drive!

While I didn’t get to all of the wineries in Hermann, I toured four: Hermannhof Winery, Adam Puchta Winery, OakGlenn Winery and Stone Hill Winery.

If you only get time for one tour, make it Stone Hill. As noted earlier, Stone Hill has the longest tradition as a winery. Luckily for visitors, they’ve preserved that history so we get a real taste of the past from both the food and wines. They’ve also made use of the original buildings. In fact, the carriage house is now their restaurant! You can read about it in this article I did earlier on the best chocolate cake I had in the past year.

You’ll also find the Stone Hill vineyards beautiful. They’re featured in the photo at the top of this article.

On the other hand, if you’re more interested in the winery tour and wine-making process, I highly recommend you visit the Hermanhoff Winery built in 1852. While Stone Hill used the premises for growing mushrooms after prohibition, at Hermanhoff they operated as a boarding house. In the 1970s, when they turned again to wine-making there was lots to do.

But it’s easy to see they were up to the task as you can see from the beautifully restored (once covered with layers of paint) bricks in the photo below. In fact, 10 of the stone cellars have been placed on the National Register of Historic Places. 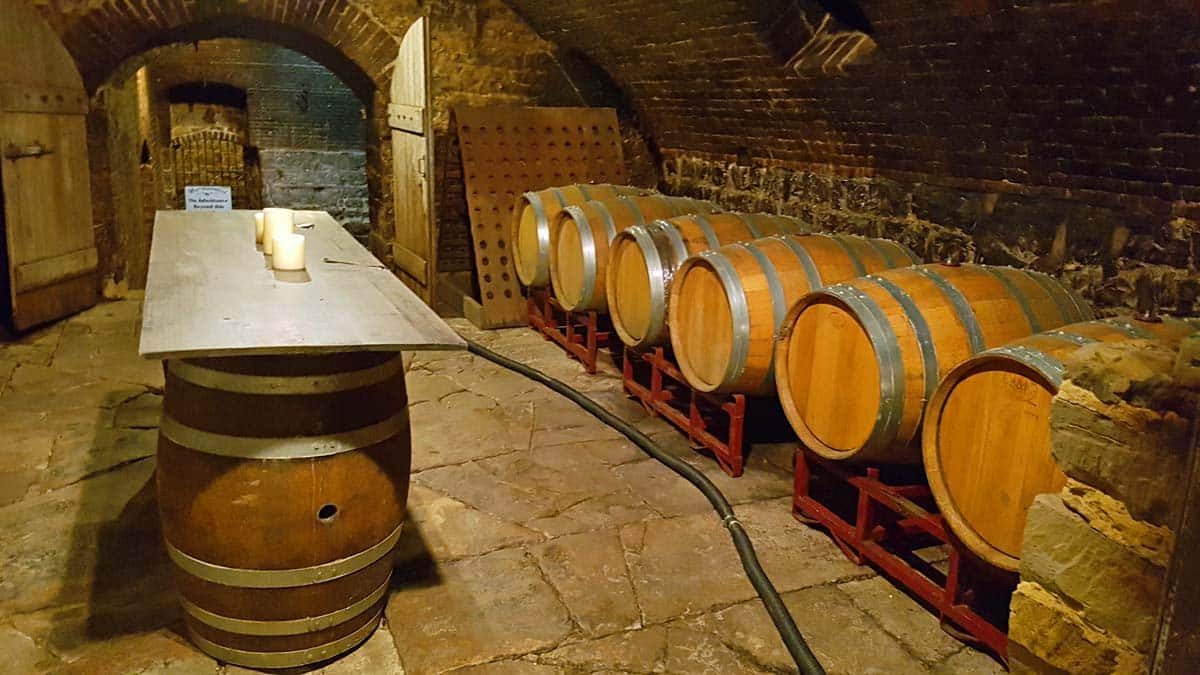 The Adam Puchta Winery opened in 1885. However, unlike most Missouri wineries, it didn’t shut down during Prohibition. Instead, they made fruit wines and dandelion wines without alcohol.

Here, I found a favorite red wine, which is odd for me as I generally prefer white. Or maybe the name captured my interest — Cat’s Meow. Best served cold, this semi-sweet red wine reminded me of home-made jam with its flavors of plum, dark cherry, and currant.

If you’re looking for wide-open vistas and a river running by, then a visit to OakGlenn should be on your list. I certainly enjoyed the scenery!

Here, my fav was a white wine, Niagara. But then again, I love apricot jam and this sweet wine really reminded me of it! It’s made, of course, with the Niagara grape. Moonbeam Medody with its essence of peach was runner-up for me. 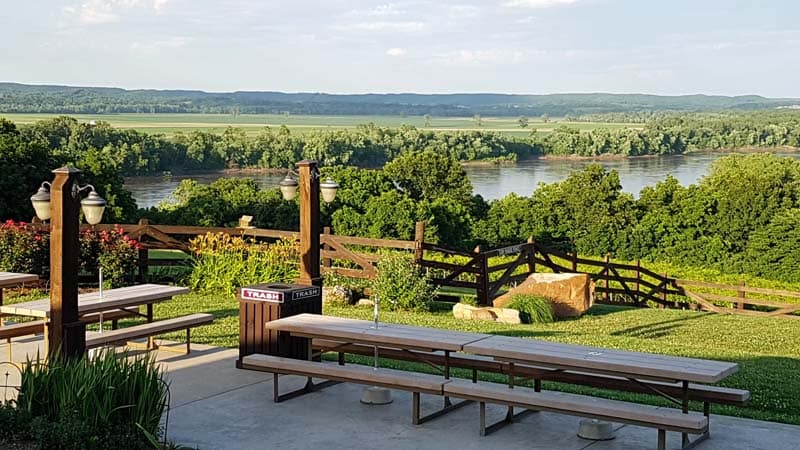 I also had the pleasure of visiting the tasting rooms of three wineries beyond Hermann. They included: Montelle (Augusta, MO), Mount Pleasant (Augusta, MO) and Canterbury Hill (Jefferson City, MO).

Cindy and Tony Montelle, owners of Montelle Winery, shared a lot of the history of Missouri’s wine industry with me. There, I learned that on June 20, 1980, Missouri was the first area recognized as a federally designated American Viticultural Area with the Augusta AVA.

While viticultural area sounds confusing, the term simply means it’s a designated wine grape-growing region in the United States distinguishable by geographic features. And that, of course, takes us back to the Menfro silt loam soil found in Missouri.

In fact, Montelle Winery has 100 acres of grapevines, along with organic gardens, when I visited. My favorite wines there? The Vidal Blanc Ice Wine and River Country White.

From Montelle, it was off to Mount Pleasant, also in Augusta. Mount Pleasant’s history goes all the way back to 1859, like many others in the state. After their vineyards were burned out in 1920, during prohibition, the business ended until 1966 when the current owners’ relatives purchased it and started out again. 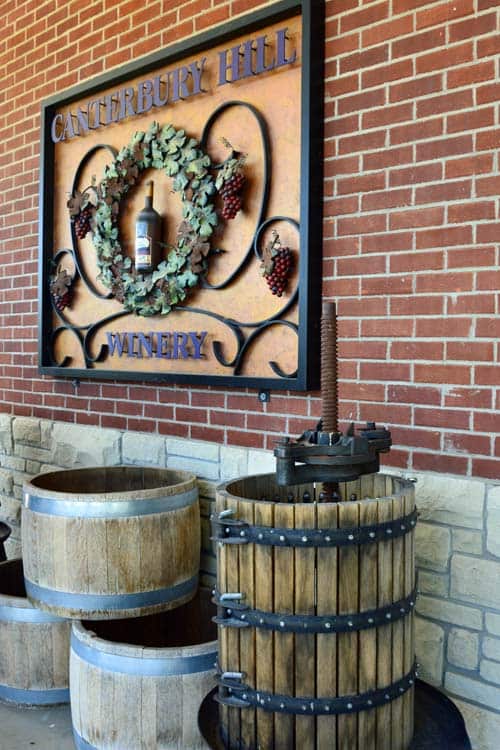 And finally for the last stop on my amazing tour — Canterbury Hill Winery in the state capital, Jefferson City. When you visit, make sure you take time to enjoy a meal in their restaurant as well as some of their fine wines. I always love creative names and Canterbury Hill kept theirs in line with the winery name. Their wine list includes Canterbury’s Tale, Excalibur, and Red Tower.

I found their wines as fine as their names suggested!

Here’s a Google map of all of the wineries I visited. Have fun exploring and tasting Missouri’s best!

I visited these wineries on a trip hosted by  the State of Missouri for a week of traveling along the Katy Trail in Missouri–-thank you, it was amazing! I’d also like to thank the Beenders-Walker group for organizing the trip and taking such awesome care of my needs along the way.

The statistics on wine production by state are from this 2012 Government PDF, interpreted and summarized by Aaron Nix-Gomez on his blog, HogsHeadWine.

Historical statistics on Hermann’s wine production are from the Hermann Official Visitor Information at: http://visithermann.com/taste-tour/wine-history/

More Things to See In Missouri

5 Things to See in Jefferson City That You Can’t See Anywhere Else!

Jefferson City, Missouri, may be small but it’s home to some fascinating historic properties!

The Historic Hermann Museum is situated in the 1871 German School Building, which is topped by an 1890 clock tower. The museum preserves the history of the historic German community of Hermann, tucked away in one of the best wine growing areas in the Missouri River Valley.

Missouri Microbrewery in a Mill — Tin Mill Brewery in Hermann

Tin Mill Brewery in Hermann, built in a century-old mill, is the perfect Missouri microbrewery to check out local history and enjoy a pizza and cold beer!

Clint Eastwood launched his acting career in 1959 when the television show, Rawhide, turned the cattle drives of the mid-1800s into a hit series that ran for eight seasons with 200+ episodes. And Sedalia, MO, was the historical cowtown destination with its stockyards...
Read More

Chocolate unites the world! So we'll all be celebrating together on January 27, National Chocolate Cake Day, when you combine two of my favorite things: chocolate and cake. Cake, according to the food timeline, had its first recorded recipe in 1615 in the New Book of...
Read More

Get the Glitz and Glam of the 1920s–Hotel Bothwell

The 1920s era was full of glitz and glam. Women got flapper dresses and the vote, washing machines and the diaphragm. The first radio station blasted out songs in Pittsburg in 1920, and within three years 500 stations across the nation had joined this entertainment...
Read More

In the 1920s there were 10 million cars in America, but train travel still provided most of us with our only opportunity to travel beyond our immediate communities. In fact, it was the golden age of train travel, with 260,000 miles of train tracks by 1930. Amazingly,...
Read More

The Broadway Diner in Columbia, Missouri, is famous for its made-from-scratch food--ask any of the nearby University of Columbia students, many of whom are now spread out over the whole USA, just how good it was to sit down to some of mom's home cooking. But that's...
Read More

The Budweiser Clydesdale tradition began on April 7, 1933, when Billy Wales drove a team of six beautiful Clydesdales through New York, to the Empire State Building, to celebrate the end of prohibition. The wagon they pulled held, of course, a case of Budweiser beer,...
Read More

Hikes and Walking Trails in Lake of the Ozarks State Park

Rain pounding down on dolomite rocks has created some pretty amazing geological features at Lake of the Ozarks State Park, in Missouri. Streams, rivers, and springs have also done their share of carving--so much so, in fact, that the natural beauty of walking trails...
Read More

The photo in the header above was taken at the Stone Hill Winery in Hermann, Missouri. 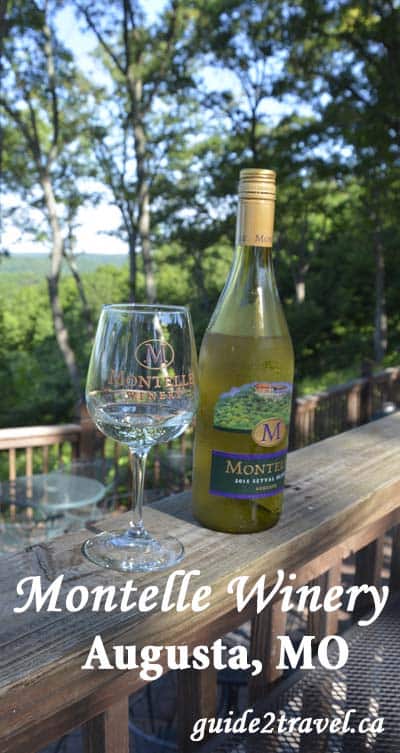