Hagwilget Bridge crosses the spectacular Hagwilget Canyon — hikers can take an easy hike across or a strenuous hike to the peak.

Bridges often top lists of engineering feats—and none more so than the Hagwilget Bridge in Northern British Columbia. From its earliest version, described as a “graceful wooden spiderweb,” to the modern structure, this suspension bridge is a marvel. And the canyon below is nothing short of spectacular.

My adventures in Hagwilget Canyon began with a road sign promising some interesting attractions in the town of Hazelton. On a quick stop at the Visitor Centre we learned that Hagwilget Bridge, along local Highway 62, appeared on the register of Canada’s Historic Places. As a plus, there were also a number of walking trails. 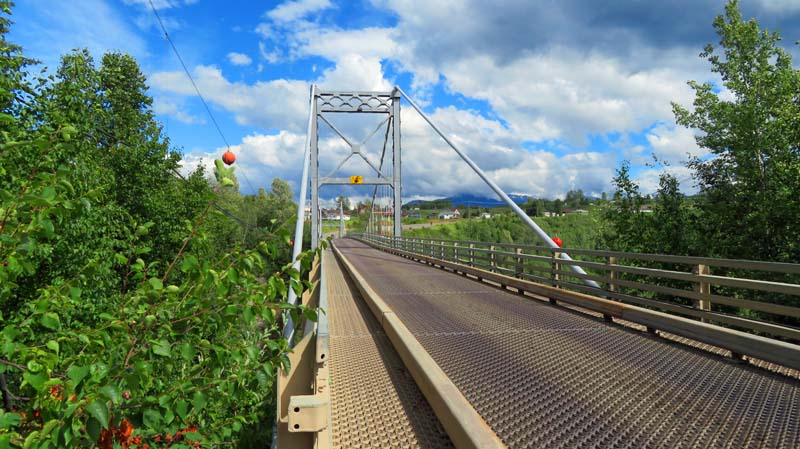 Hagwilget Bridge on BC Highway 62.

We started the drive into Old Hazelton and soon saw the bridge. Even from a distance it was impressive! Quickly grabbing my camera and hat, I prepared to get out and walk across it, leaving David to drive the car over.

As we approached, though, we realized the bridge was narrow and one-way only.

It took a few seconds to figure out what to do, but as David slowed the car, I jumped out. He immediately headed onto the bridge to cross it, since we were already blocking our end.

Then, I watched him drive away. I took a few dozen steps past the trees to step onto the bridge’s narrow pedestrian path. That provided my first glance of the canyon. 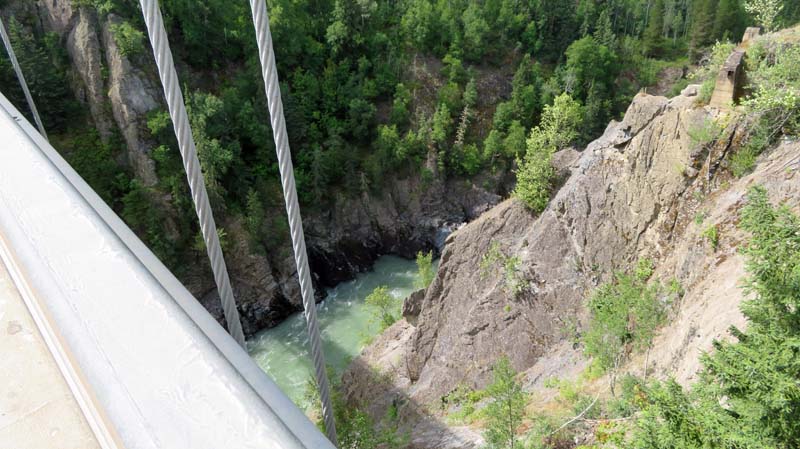 The view was spectacular in a dizzy, brick-in-the-pit-of-your-stomach, kind of way!

There I was, alone, with forever stretched out in front of me and nothing to do but put mind over matter and walk across. While I keep telling myself I’ve mostly conquered my fear of heights, at that moment I was back at square one.

So, it was left foot, right foot. Repeat.

Halfway across I remembered my camera. By then, it was all about the canyon’s spectacular beauty and the walk!

The dizzy, brick-in-the-pit-of-your-stomach feeling I had on first stepping onto Hagwilget Bridge came from its height of 262 feet (80 meters) above the water in the canyon below. That makes it higher than one of Canada’s best known, most-often visited suspension bridges, Capilano Bridge in North Vancouver, BC, at 70 meters. 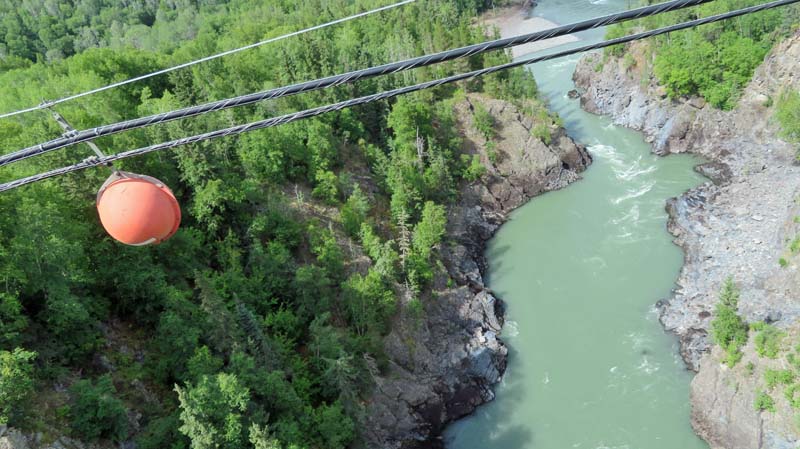 Like the Capilano, Hagwilget Bridge is 460 feet (140 meters) across. That’s three meters longer than a Canadian football field. Now I know how far away it must look to players when they pluck a flying football out of the air and start running for the goal posts!

At 16 feet wide (4.87 meters), the bridge has a narrow walking path to each side of the single lane. In addition to providing a great opportunity for walkers to get an amazing view of the river below, this also lets wide loads cross the canyon.

It took over one million pounds of steel cable and six miles of 0.5 in wire rope to build the bridge. That’s a lot!

And the reason the bridge caught us by surprise is that it begins pretty much at the canyon wall. Why? Thick erosion-resistant sandstone protrudes as a rib into the canyon, and is used as the bridge’s foundation. There are also short cement abutments on both ends.

This latest construction was designed by A. L. Carruthers, sometimes called the father of Canadian Bridge Building. It was completed in 1931, but has had upgrades to increase its load-carrying capacity for modern transportation.

The bridge gets its name from the local First Nations community. Hagwilget means “the home of the quiet people.”

Local people constructed the first Hagwilget Bridge with knives and axes. After walking across the canyon, I have to really admire their tenacity! While that early bridge was built lower in the canyon, 80 meters south of the current bridge, it was still 150 feet (45 meters) long and 100 (30 meters) feet above the river.

However, a replacement bridge was built in 1880. It still had a cantilevered design using wood and rope, but had king post trusses at the ends and queen truss in the middle. Local legend claims women of the community walked over the bridge, carrying heavy packs, to test its load-carrying capacity. And if it failed? The men stood underneath with poles to prop it up and reinforce it! 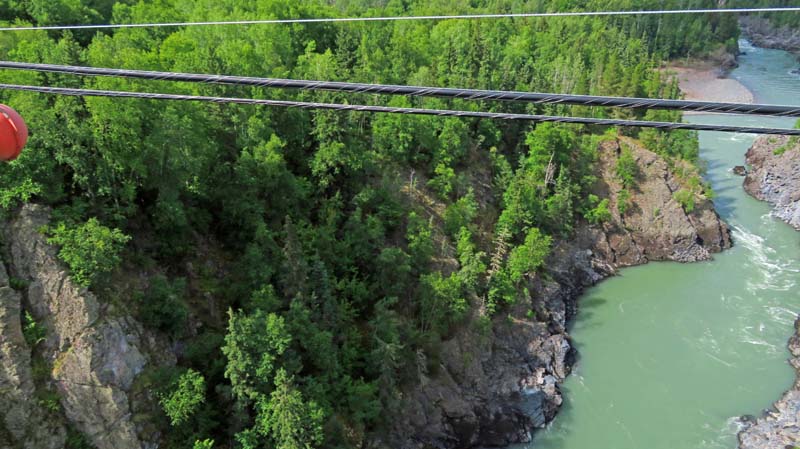 Hagwilget Canyon and the Bulkley River.

As well, the third and final bridge, before the current one, was erected in 1913 above its predecessor. It was built from wood and cast iron, making it more stable. The location was 30 meters north of the current bridge.

You can still find remnants of the earlier bridges as you explore the canyon. All of the versions are included in the historical designation.

A paved walking trail begins about half a kilometer past the Hagwilget Bridge opposite a parking area. It leads past a fenced viewing area and information signs about Hagwilget Canyon, below, then over the bridge. The bridge can be crossed on either side by walkers. 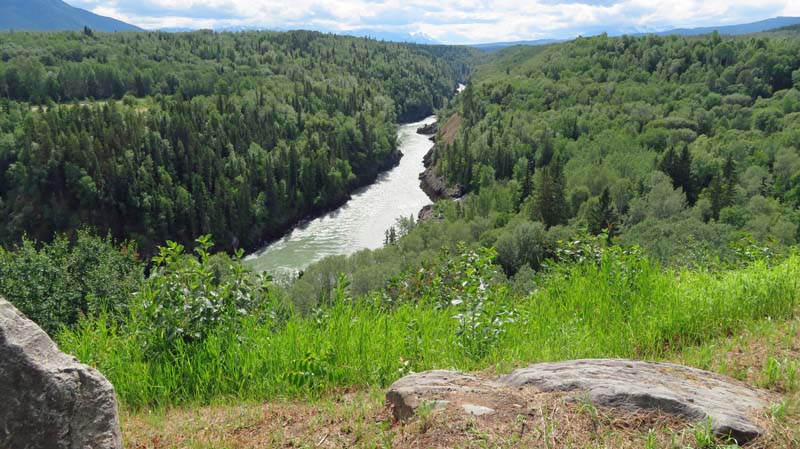 Bulkley River from the viewing area.

While you’re in the viewing area, you can check out the Stekyawden and Seven Sisters mountain peaks and the river below.

In addition to this quick walk, though, there are a number of hiking trails that allow you to explore the canyon and surrounding areas. They include:

For more information on these trails and a number of additional ones that explore other local mountains and even include a hike out to a glacier, see the New Hazelton site: http://newhazelton.ca/visitors/hiking-trails

Getting to Hagwilget Bridge & Canyon

The Hagwilget Bridge and Hagwilget Canyon are situated between Hazelton, on the Yellowhead Highway, and Old Hazelton, off of BC Highway 62.

The header photo was taken approaching Hagwilget Bridge, which is on BC Highway 62, between the Village of Hazelton and the District of New Hazelton. The Bulkley River runs through the canyon below the bridge.

The rice terraces of Batad, Philippines, are over 2000 year old feats of engineering. Hike into this UNESCO heritage site to glimpse traditional farming.