...travel adventures with a twist of history Latest ArticlesAdventure
;

Scotts Bluff National Monument is one of three historic places in Nebraska recognized by the U.S. government as national monuments. President Woodrow Wilson made the designation back in 1919. While some may have been disappointed that Scotts Bluff didn’t end up as a National Park, its monument status has preserved this national historic landmark on the Oregon Trail.

The bluff is actually a rock of sorts, a formation of sandstone, siltstone, volcanic ash and limestone topped off with a caprock, or “lid,” of hard limestone that keeps it from eroding. For me though, this is where speaking “American” and “Canadian” starts to become a problem. In Saskatchewan, at least, a bluff is a small outcropping of trees. And when you find a bluff you won’t find any hills, rocky or otherwise.

However, according to National Geographic a bluff is a type of broad, rounded cliff typically near water. Since it lists bluff formations everywhere from Mars to South Africa to the Cayman Islands, I have to surmise that our “local” version of the word is a little flawed. Such is language.

The View From the Top of Scotts Bluff National Monument 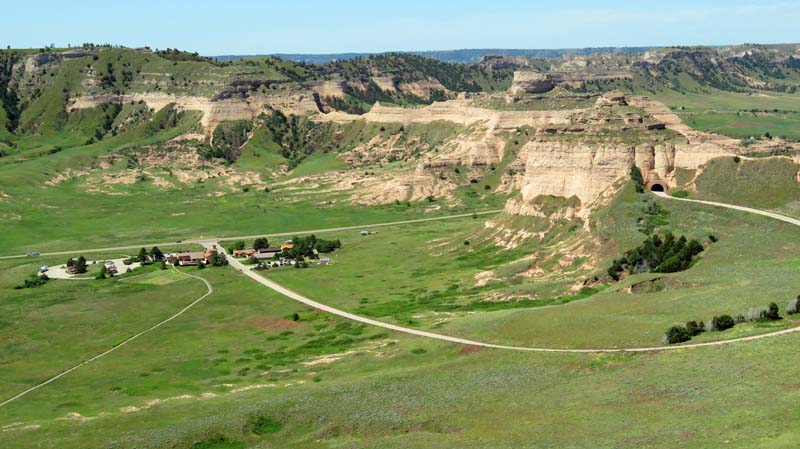 On a clear day, you see for forever…or almost forever, at the top of Scotts Bluff. In fact, Laramie Peak, 100 miles to the West, appears on the horizon.

Those early settlers walking the Oregon Trail must have been stunned to find it! And according to journals and letters many left behind, just the shade from the Ponderosa Pines at the higher elevations was a relief. Indeed, back when they were crossing Mitchell Pass, no trees grew along the North Platte River at all.

But that’s not what you’ll see today. In fact, the Park Service planted 23,000 shrubs and trees in the 1930s. Now, even if you’re not looking for a shady tree, I can guarantee the sights merit the time — and energy — however you decide to reach the top. In addition to Mitchell Pass and Wyoming to the west, the Wildcat Hills appear to the south (bordering the side of the North Platte Valley) and Chimney Rock to the east. 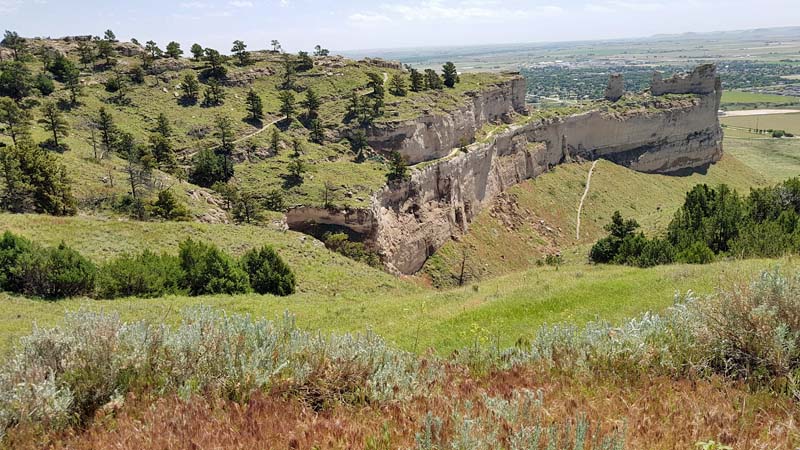 Hike to the top of Scotts Bluff and see the view.

My favorite view? The formation above. If you look closely, you may see — as I do — what appears to be the remains of an ancient castle. Of course, it’s really just the way the rock has eroded over time…

A variety of hiking trails let you explore various parts of the Scotts Bluff changing landscape. While short trails take you to the north and south rims of the bluff, the south trail gives you a view of Mitchell’s Pass.

And of course, a longer trail goes all the way from the Visitor Center at the bottom, to the top of the bluff. It covers about a mile-and-a-half. When that hot Nebraska sun is overhead though, you may want to go down the bluff rather than up! That still takes about half-an-hour with the terrain changes. 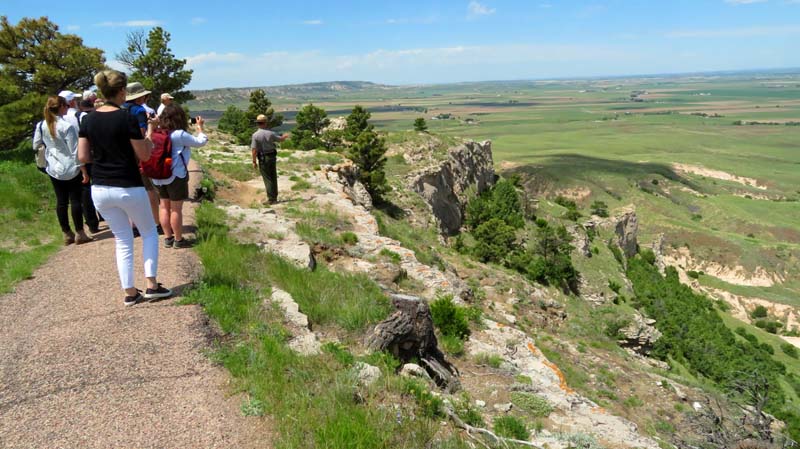 Ranger talking about the land formations and where the Oregon Trail ran.

For those not up to the hike, it’s easy to get to the top by Summit Road. My favorite part of the 1.6 mile drive? The tunnels. If you visit with an RV, or have a trailer in tow, the Visitor Center has a shuttle. Or, if your whole group wants to hike down — but not up — you can take the shuttle.

Luckily, a ranger acted as a guide on my visit. He explained a lot about the history of Scotts Bluff and the geology. Together, these elements help make it a significant site worthy of the National Monument designation.

For example, the oldest exposed rocks are 33,000 years old. Each different colored layer of Scotts Bluff tells a new story of local conditions over the centuries. In fact, its exposed north face provides the longest geological history in Nebraska. 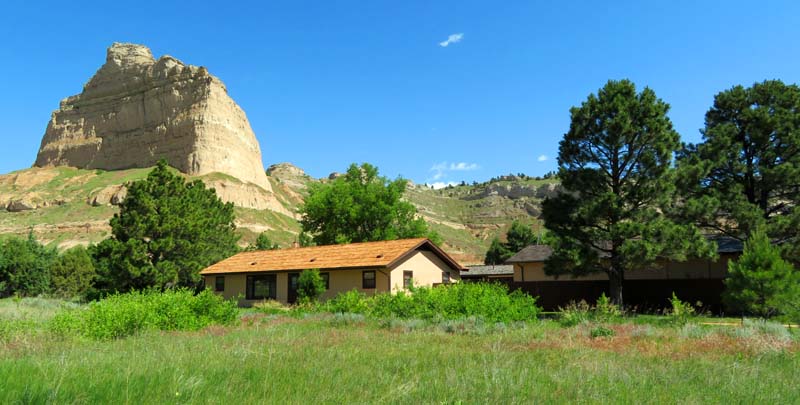 Scotts Bluff National Monument Visitor Center sits in the middle of the prairie grass walked over by nearly half-a-million people from the 1830s to ’60s. Rising 4,659 feet above sea level and 800 feet above the grassy river valley, the Monument was visible for days to those pioneers.

Now, much of the development of what you see at the Visitor Center started in the 1930s. A picnic area came first, followed by parking areas and the first small museum. Federal funds financed the building of tunnels and a road to the top. As many as 200 men worked out of Civilian Conservation Corps, Camp 762, situated in the badlands area. That part of the project ran from 1935 to 1938.

Parts of the project progressed quickly, and the Oregon Trail museum opened officially on July 16, 1936. Three years later, they completed the Summit Road. But there was still lots to do and the next era of growth followed from the mid-1950s, to the mid-1960s. In 1959, local committees purchased the first Conestoga wagon for the growing museum. More land was also purchased, including the badlands area, to preserve the area’s full history. 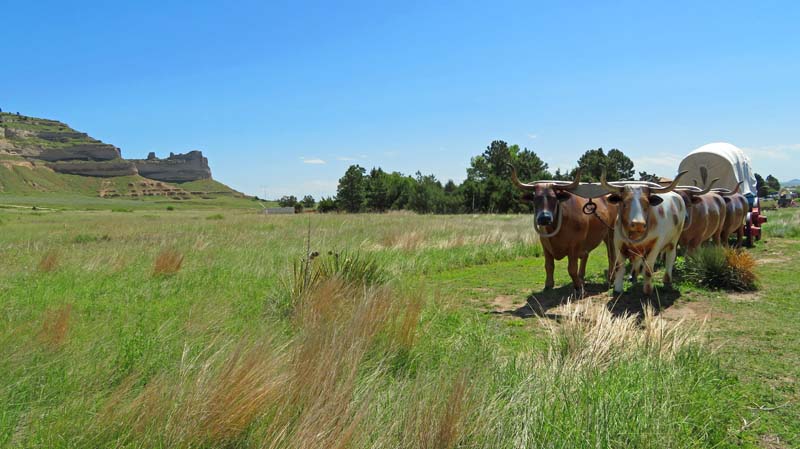 Statues of team of oxen on the Oregon Trail.

Start your exploration of Scotts Bluff National Monument at the Visitor Center. Today, it consists of three rooms. The Landmark Room welcomes visitors and shows a fabulous new video made by college students. With its evocative music and images of the Nebraska landscape, it really sets the mood for your visit. In the History Room, you’ll find westward expansion exhibits and the gift shop. Finally, the third room, the William Henry Jackson Room, displays the world largest collection of his sketches, paintings and photographs of the American West. 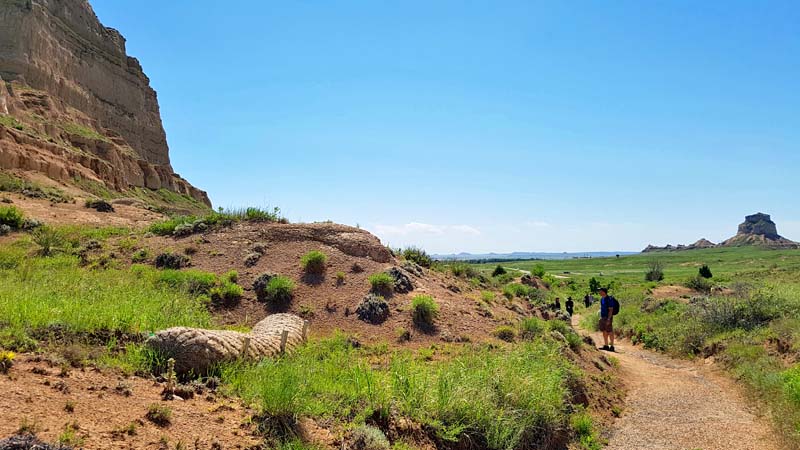 Hiking the Oregon Trail at Scotts Bluff in Gering, Nebraska.

As well as artwork of historic places, history also comes alive in Scotts Bluff. Just take a very short walk out to visit the wagon and team of oxen, which are forever following the Oregon Trail through native grasses and yucca shrubs, to feel like you’ve entered a time machine.

There, you’ll find park ranger interpreters, dressed as pioneers following the Oregon Trail, who can answer all your questions. In fact, you can even get an authentic taste of the past with some hardtack. What’s that? Essentially tack (for short) is a dried out cracker that lasts for years.

And while I can guarantee that if you have tack in your bag, you’ll never starve, I know you’ll sure enjoy a taste of “real” food after a day eating it! 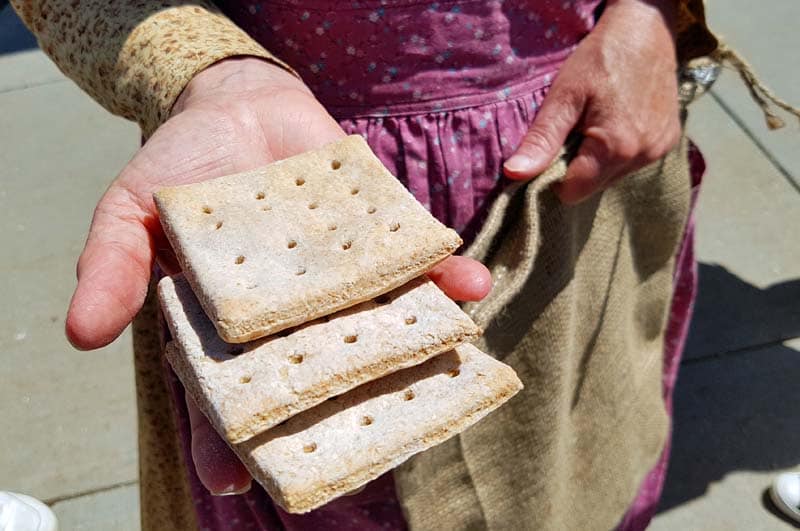 After spending an enjoyable morning visiting (that did include trying the hardtack!), I recommend a stop at Scotts Bluff National Monument to explore and leare more about these historic places in Nebraska.

I dined at The Tangled Tumbleweed on a visit to Nebraska hosted by the Nebraska Tourism Commission. This part of the trip was with Gering Convention and Visitors Bureau and Scotts Bluff County Area Visitors Bureau. Many thanks to all of my hosts for an incredible week of adventures! While I was hosted, I retain full editorial control of the articles I write after taking this trip.

More Things to Do in Nebraska

The photo above was taken by Linda Aksomitis at Scotts Bluff National Monument, in Gering, Nebraska. 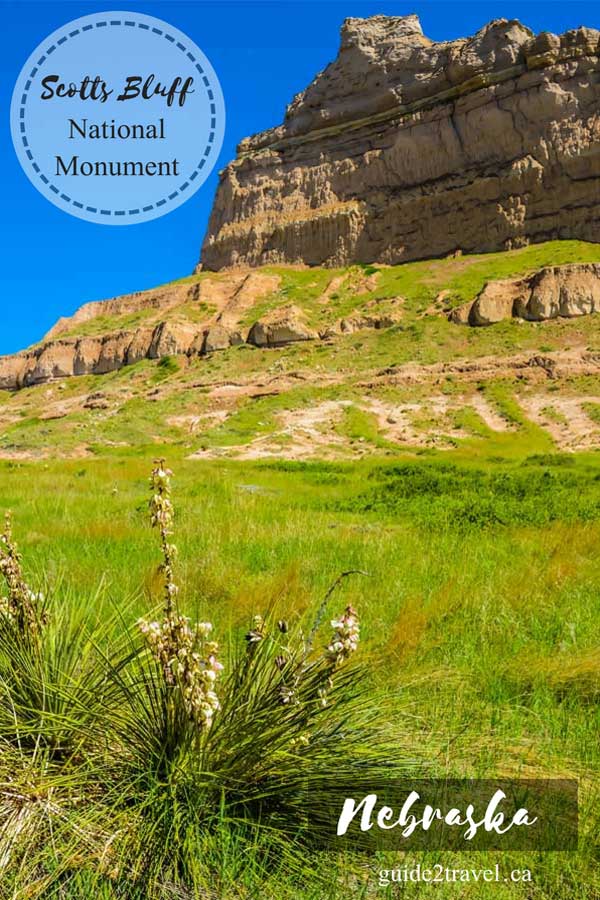 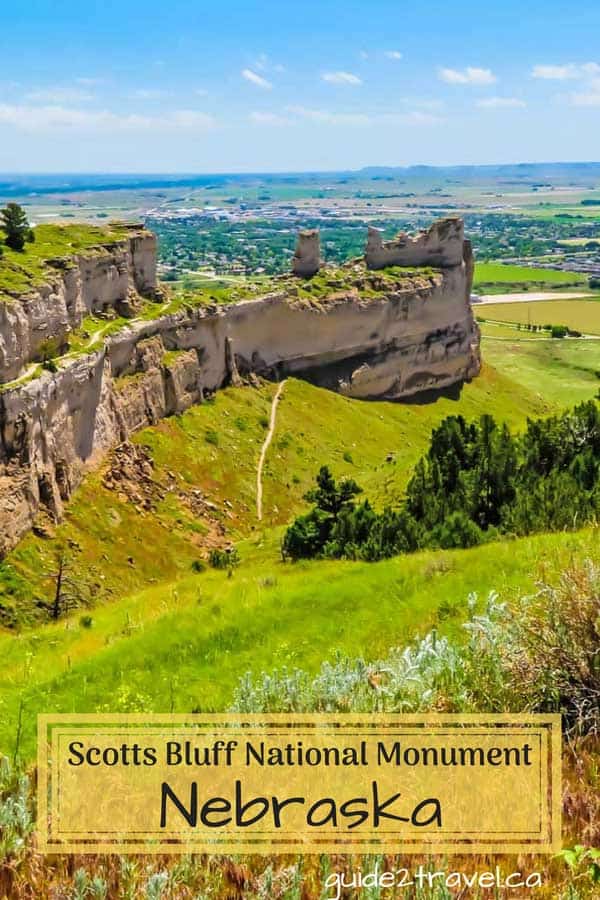 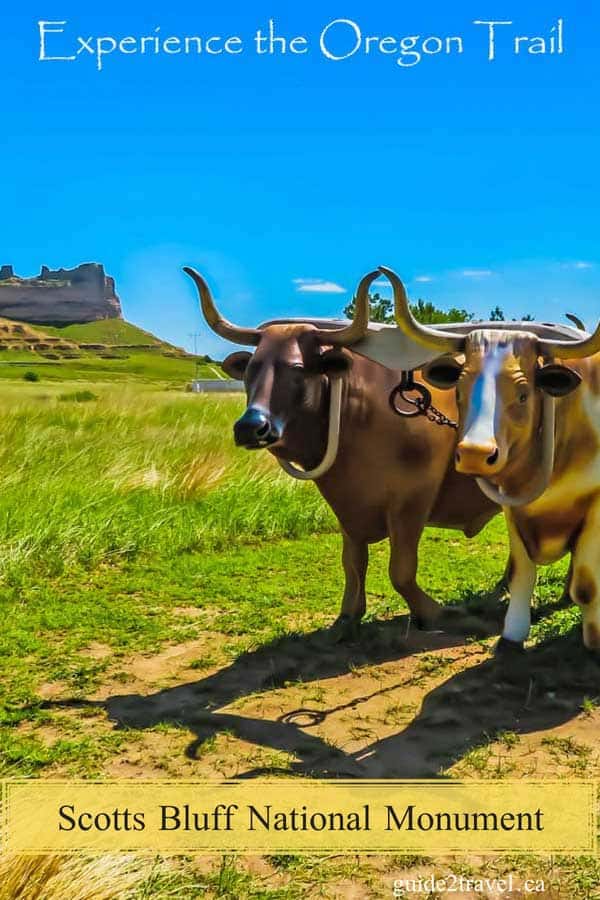