One of Oregon's Most Popular Parks
Today’s ships have so many navigational aids we may take lighthouses for granted. Over the centuries, though, they’ve saved countless lives — and the dollar investments of many ship owners.

In fact, lighthouses were so important that on August 7, 1789, the United States Congress approved an Act that established and supported lighthouse, beacons, buoys and public piers. Two hundred years later, on August 7, 1989, the US Congress passed a second lighthouse resolution, making the day National Lighthouse Day.

While traveling, David and I often see lighthouses. This year, our favorite was the one at Umpqua Lighthouse State Park, which is situated right in the middle of the amazing Oregon Dunes National Recreation Area.

History of the Umpqua Lighthouse 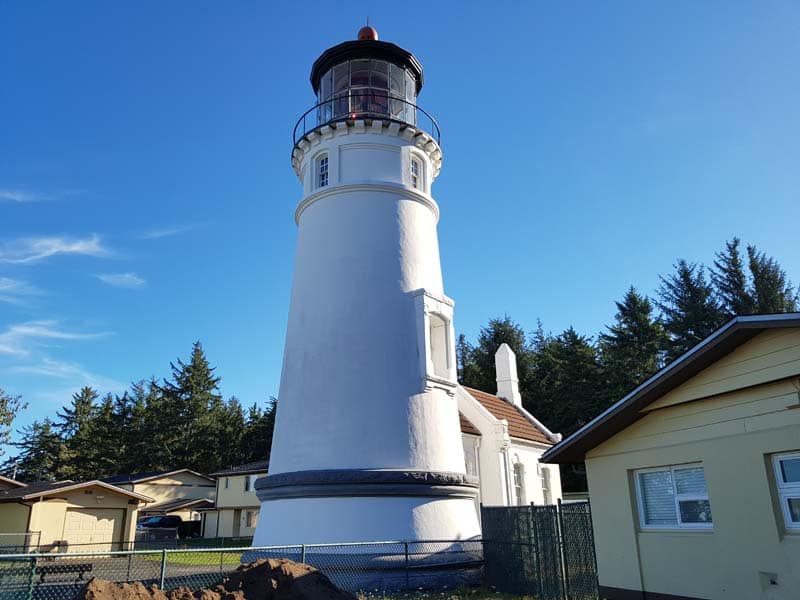 There are a number of fascinating stories in the history of the Umpqua Lighthouse. To start with, the current building is the second one. What happened to the first one? Well, it only survived for seven years before falling over in 1864!

To be fair though, the collapse wasn’t really the fault of the government engineers that designed and built it. The beautiful Cape Cod-style building tower rose an impressive 65½ feet, while its lantern was a third-order Fresnel lens. At first, all went well.

Then, in February 1861, after four months and 72 inches of rain, the Umpqua River rose nearly 45 feet! Needless to say, the builders hadn’t anticipated how that much water would weaken the lighthouse’s foundation.

Miraculously, it held on for a few more years until an October gale in 1863 did what the water had failed to, and nearly toppled it over.

Workers kept the lights going but pleaded with the higher-ups to abandon it. On receiving approval, workers quickly removed the expensive Fresnel lens. Next, they started removing the iron lantern…

That was when, as they say, all hell broke lose!

Scurrying for their lives, the workers fled as the lighthouse collapsed.

Of course, the need for a lighthouse didn’t change. It took nearly thirty years, though, until 1891, for bids on building a new one to be opened and accepted. The lighthouse, however seemed jinxed! One thing after another happened, and the first contractor failed to finish the lighthouse, so a second contract was awarded.

Lighthouse #2 went into service on New Year’s Eve in 1894. Its two white flashes, followed by one red, can still be seen for 19 miles seaward. The two-ton lens has a 10 foot diameter, and its prisms were hand cut in Paris, France, in 1890. Mariners were once again safe on this part of the Oregon coast.

However, there wasn’t enough money left of the original allocations to pay the second contractor. It took until January, 1898, for payments to be sorted out between the first and second contractor and the Treasury Department to close the case.

The second Umpqua Lighthouse sat on a beautiful location in Winchester Bay on the Oregon coast. So in 1935, the State of Oregon approached the Bureau of Lighthouses to secure land around it for a state park. The Bureau turned over 10 acres under a revocable license in exchange for $1,000, and Umpqua Lighthouse State Park was established.

Today, the entire Umpqua Lighthouse State Park is operated and maintained by Douglas County. Umpqua Lighthouse is one of the few left in the country with an operational first-order Fresnel lens. Existing buildings have been renovated and converted to a museum that’s open to the public.

But the park is just open for daytime usage. It also provides campsites along with yurts and cabins for those who want a different overnight experience. There are also hot showers and modern toilets. 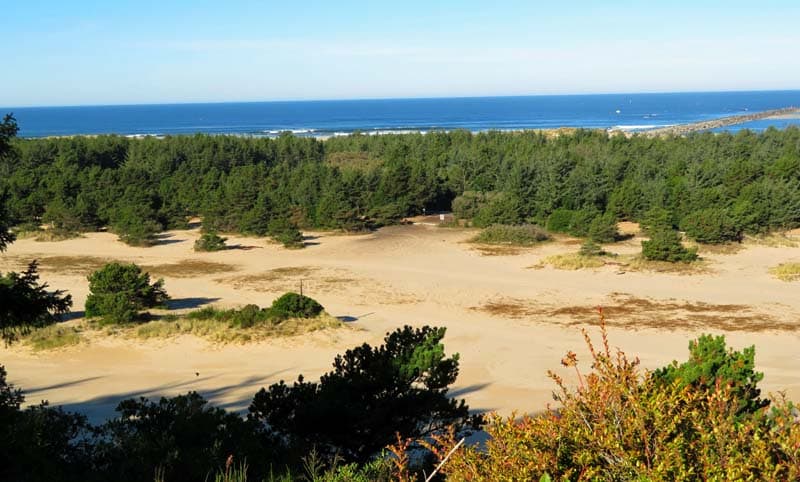 While the lighthouse and museum are certainly a big draw to this state park, many enthusiasts also come for the dunes. Indeed, Umpqua Lighthouse Park is smack in the middle of towering sand dunes that reach heights of 500 feet or more!

The dunes are protected by the Oregon Dunes National Recreation Area, which does allow access for off-road enthusiasts and hikers. If you enjoy motorsports like we do, whether it’s with a sand rail, motorcycle, 4×4, or quad, you’ll want to put the park on your summer destination list.

Of course, there are also many water sports to enjoy here too. Whether you like sailing, canoeing, water-skiing, swimming, scuba diving (you may find treasures from sunken ships!) or fishing, there’s a spot for you.

And me? Even though we didn’t have a quad along, I got to enjoy the dunes on foot. There are lots of trails through both the dunes and the Douglas fir and Sitka spruce trees in the recreation area. My preference, though, will always be digging my toes into the sand of the dunes.

Umpqua Lighthouse was our favorite lighthouse for National Lighthouse Day this year. What was yours? Let us know in the comments below.

More Things to See in Oregon

Eastern Oregon has an adventure for every adrenaline junkie. Hike mountains to waterfalls, try kite surfing, or downhill ski year-round!

If you only have one day to spend in Portland, Oregon, here’s a list of the best things to see and do. The walking itinerary starts at the AMTRAK station.

The header photo above is of the Umpqua Lighthouse, on Winchester Bay, on the Oregon coast. Find the best deal, compare prices, and read what other travelers have to say at TripAdvisor about staying in this area.