If something has a motor, David is interested. And if it changed industry, I’m interested. Both of us found lots to see at this Whitehorse museum.

Nothing could stand out more than the gigantic, bright orange landtrain in the fenced compound outside the Yukon Transportation Museum. I can’t imagine what Northerners thought when they saw it driving through the snow back in the late 1950s. 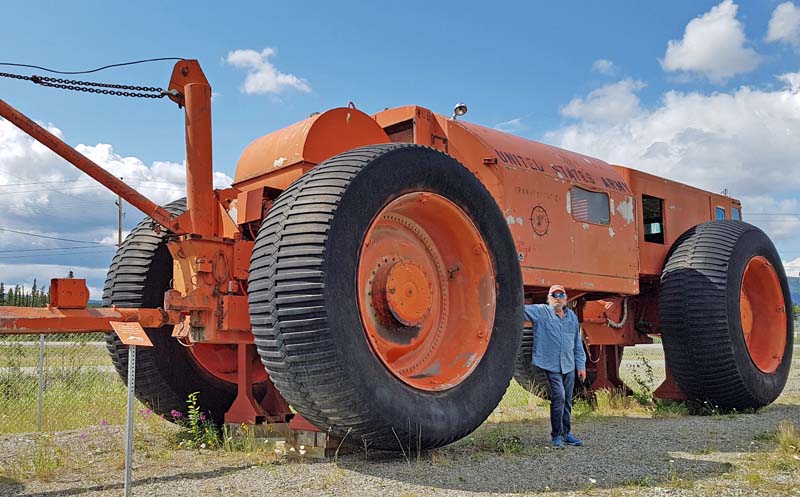 Of course, for us, staring at it in the museum, it took awhile to even figure out what it might do! Luckily, the museum was selling copies of the operating manual, so we eventually got the whole story, right down to the original plan to run it with a nuclear reactor.

It turned out the Sno-Train was a four-section cargo carrier pretty much unstoppable over ice, snow, bull-dozer trails and even brushy terrain. The front, where David is standing beside the tire, above, was the locomotive – thus the machine’s name as a train. This section was articulated between the front and rear wheels for driving.

Behind, rolled three freight cars. What did they carry? Supplies and equipment used by the Army Transportation Corps that had purchased it. In fact, it traveled around Greenland, as well as other parts of the north, hauling cargo until 1962. It was mainly used to support the DEW (Distant Early Warning) line (radar) operated by the US and Canada during the Cold War.

However, the most interesting part of the sno-train, to me anyway, was that it was designed to accommodate three people. Each pair of locomotive wheels had a compartment built over it. One contained everything necessary to supply DC and AC electrical power. The other provided a living unit kept at 60 degrees at temperatures up to -40 outside, by hot water heat. 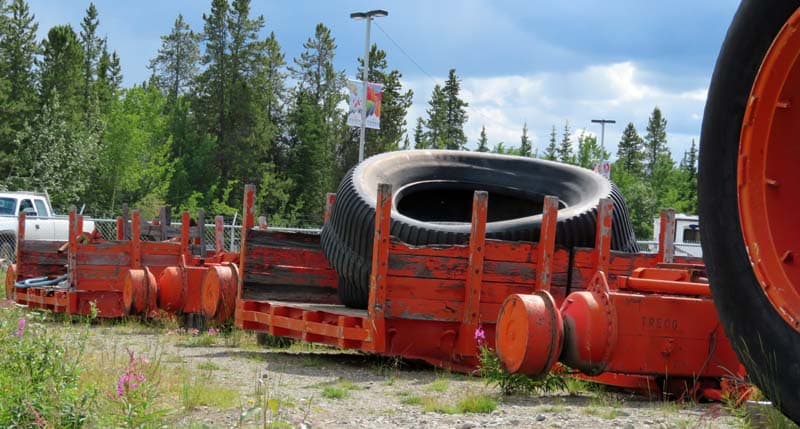 Naturally, somebody also had to steer the monster. Small switches, controls, and the potentiometer on the instrument panel made that easy. And seeing? Well, the locomotive had a viewing bubble and double paned, tinted glass (to avoid snow glare) for that.

Naturally David figured we could use one of these machines! However, only one was ever built. 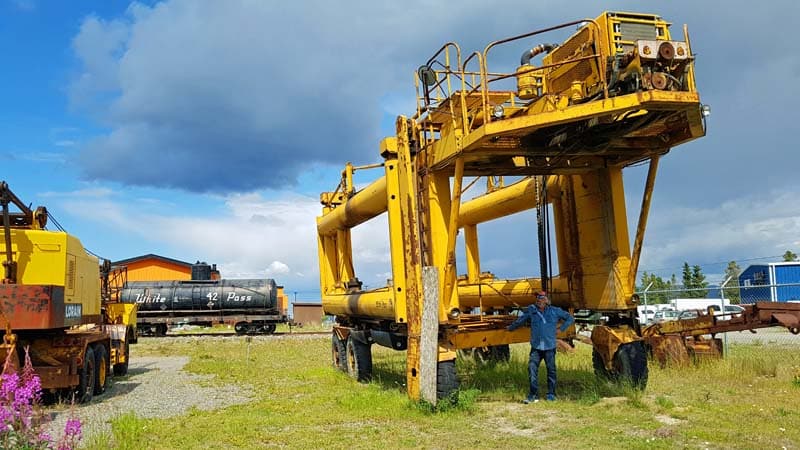 David and I puzzled over the function of the straddle carrier for quite awhile before going inside the museum and finding out. What’s bright yellow? Has its motor and driving gear on a platform on top? And looks somewhat like an old straw bale carrier?

We almost figured it out.

The answer? A straddle carrier for intermodal shipping. No wiser? Well, it’s what they use to hoist those giant, steel boxes that are carried by trucks, trains, and ships. Their advantage, of course, is that the shipping box fits everywhere. 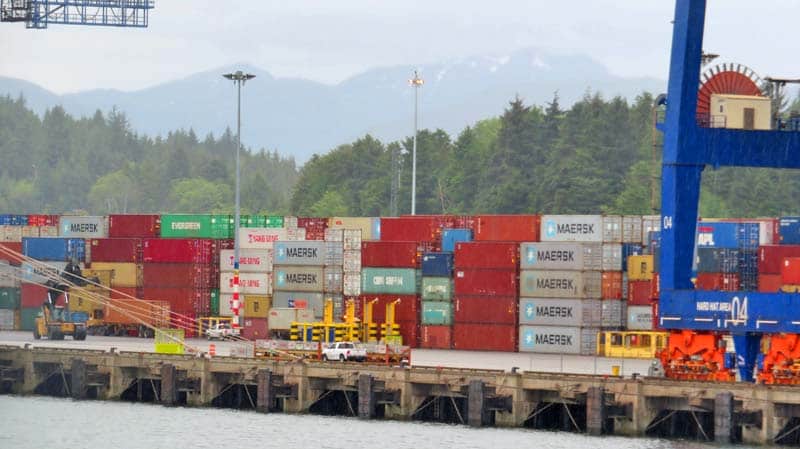 Intermodal contrainers on the docks waiting to be loaded in Prince Rupert, BC.

Above, you can see a photo of intermodal crates on the docks in Prince Rupert on the next leg of our trip. They arrived by truck and train and are ready to be loaded onto ships.

Queen of the Yukon

Queen of the Yukon plane at the Yukon Transportation Museum.

What better way to get around the vast distances of the north than by air?

The Queen of the Yukon is a replica of the Ryan B-1 Monoplane that arrived in Mayo, Yukon, in late 1927. Owned by retired RCMP corporal, Andy Cruickshank, and his partner, the Queen started commercial aviation in the area.

Decked out with skis to land in the North, the new owners were excited to start transporting both goods and people. However, the plane crashed while trying to land on a windy day in Whitehorse around eight months later. The owners ordered a second plane, Queen of the Yukon II. It’s life was even shorter, crashing three months after its arrival. The pilot of that plane, John Melvin Patterson, became the first aviation fatality in the Yukon.

This shiny beauty, in the Yukon Transportation Museum, was a replica built for Expo 86 in Vancouver.

Machinery of the Past Used to Build the Alaska Highway 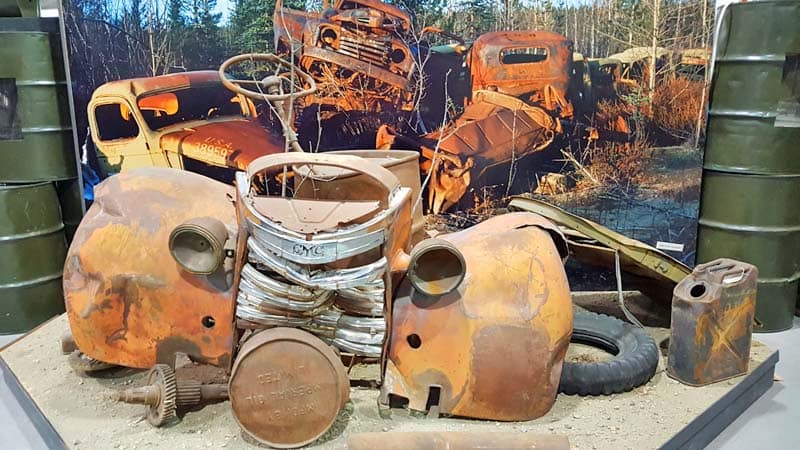 Machinery & photo of machines (outdoor photo on the wall) used to build the Alaska Highway.

We stopped many places looking for machinery of the past used to built the Alaska Highway (or ALCAN Highway). Very little survived.

However, over 7000 pieces of U.S. military equipment were used to build it. That included 5000 trucks, 904 tractors (mostly Caterpillar D8 and D4 bulldozers), 374 graders, and 174 shovels according to this MVPA (Military Vehicle Preservation Association) document.

I can’t believe they made such a close count of shovels!

Seriously, though, as far as we were able to learn, most of the machinery was simply bulldozed under and left behind. 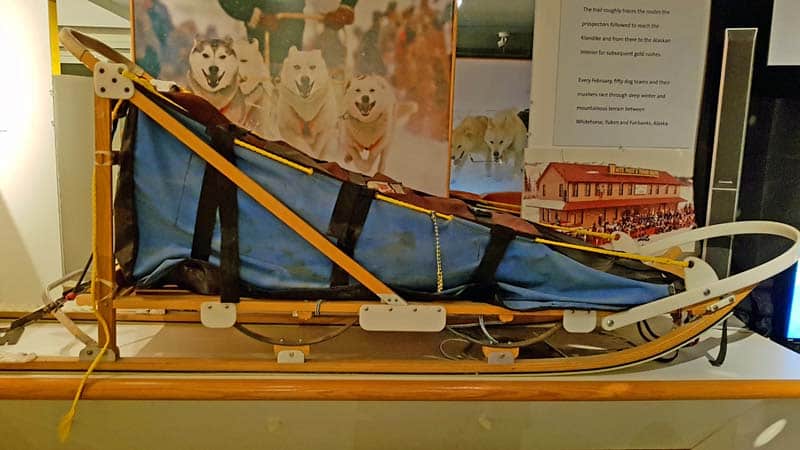 Dogsled in the Yukon Transportation Museum.

From the world’s biggest wind vane to the early boats and dogsleds used by the First Peoples in this area, there’s lots to see at the Yukon Transportation Museum.

The outdoor collection includes a number of larger pieces, like the Sno-Train, an old bulldozer, even a White Pass & Yukon Route sleigh. Indoors, you’ll find everything from Andy Hooper’s famous truck (an Army Surplus truck used to move buildings around Whitehorse) to Fluffy the Snow Cat – a 1954 Bombardier tractor.

The museum is open year-round, although hours vary. Click here for hours and admission fees: http://goytm.ca/visiting/

The Google Map, below, shows our route at this part of the trip, starting in Watson Lake through to Skagway, our stop after Whitehorse.

More Things to Do in the Yukon and Alaska

Adventures in Alaska Depending on the Season

Alaska is the final frontier for adventure travel. Discover thrilling activities in Alaska through the seasons of summer, fall, winter, and spring.

The photograph at the top of the article is David Aksomitis, standing beside the LeTourneau LCC-1 Sno-Train at the Yukon Transportation Museum in Whitehorse. 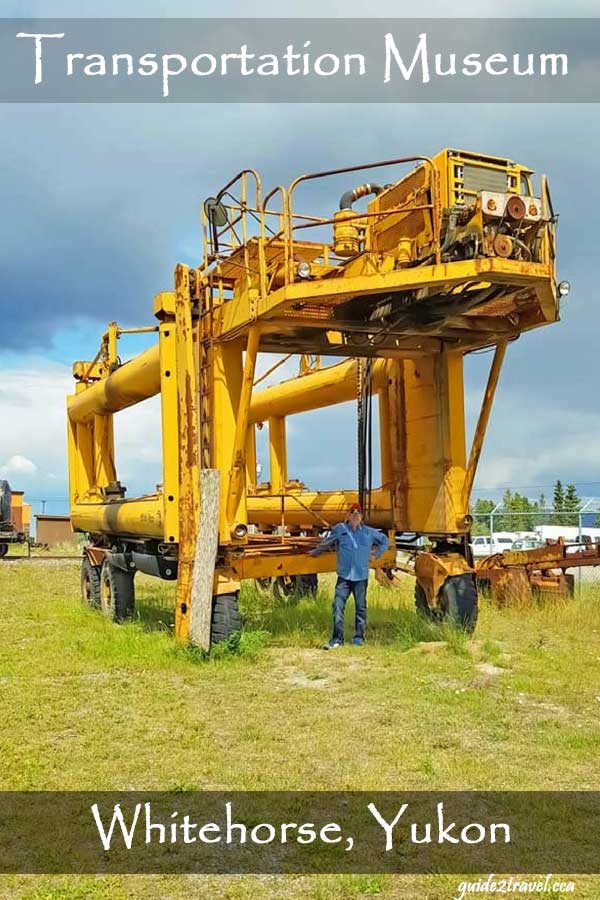 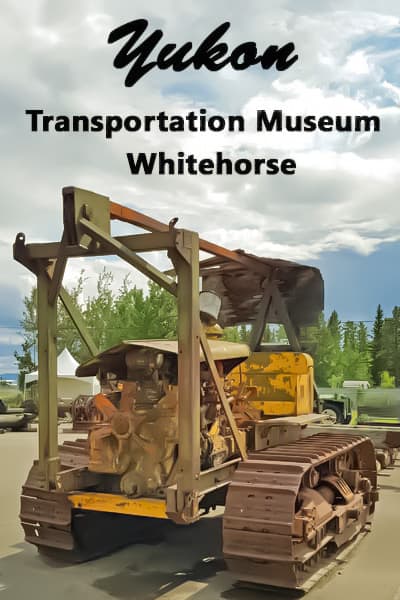