Watch the greatest cyclists on the planet race through historic old Québec
;

Quebec City is a premier destination for cyclists. In fact, some of the world’s best arrive in Quebec City, Canada, each September (September 7, 2018), to watch or compete in the grueling 201.6 km (125.3 mi) Grand Prix Cycliste de Québec race event.

What makes it even more interesting is that the course runs through Old Québec, a UNESCO world heritage treasure. Since the race through the old city consists of 16 laps on a 12.6 km circuit, it’s also exciting for spectators.

Racing of any kind interests me. However, bicycle races like the Grand Prix Cycliste de Québec are especially interesting, since they’re all about the skill and fitness level of the participants. I know I found it challenging to walk up some of the hills on the course — never mind race a bicycle up them!

Many cyclists do take the challenge though, and attempt to follow parts of the course on race day. You can see in the photo above that they’re having a tough time pushing their bikes uphill at this part of the race. 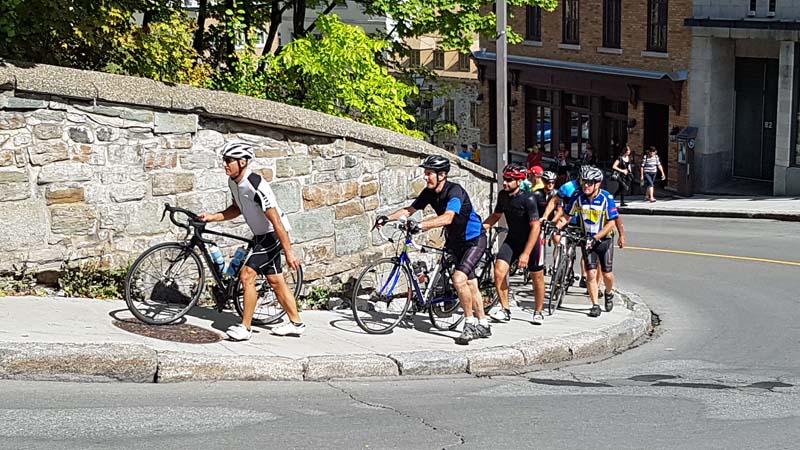 Amateur cyclists biking parts of the same course as the professionals on the Grand Prix Cycliste de Québec.

Now, compare the photo above of the amateurs to the pros below, to see what it takes to compete at a world-class event like this one. 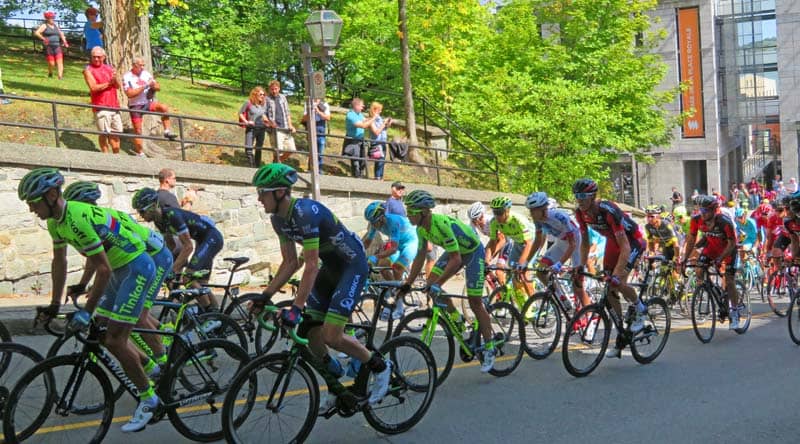 Participants in the Grand Prix Cycliste de Québec climbing one of the steepest hills on the course.

Quebec has held a Grand Prix Cycliste de Québec every year since 2010. The event is part of the UCI WorldTour (Union Cycliste International), and just one of two races in Canada’s Laurentian Mountains. Montreal, held just a couple of days later, is the second. To date, only one racer, Simon Gerrans, has won both races back-to-back, to achieve a Laurentian double.

In addition to the Canadian events, there are 35 other races (37 in total) in the UCI World Tour in 2017. The world-famous bicycle race, the Tour de France, is one of its three events classified as a Grand Tour.

So, when you see those racers at the start line in Old Quebec, you’re seeing the same elite athletes that draw 12 million spectators around Europe! 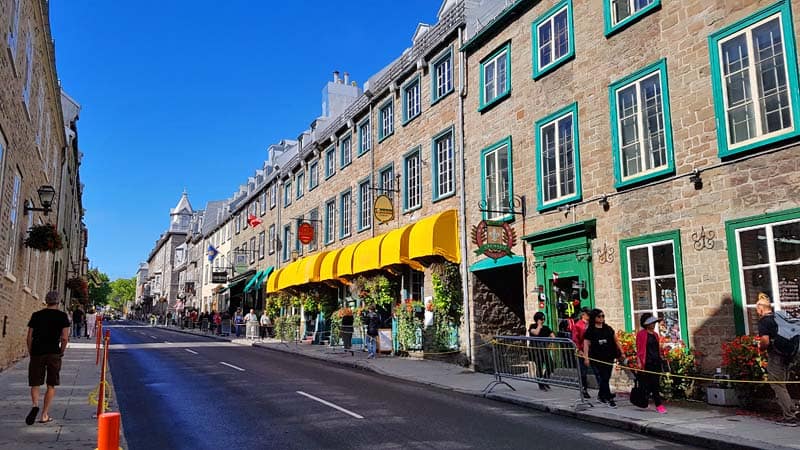 Race events are an adrenaline rush even if you’re a spectator instead of a participant. When I attended the event, I walked a lot of the course before it began, following the fences throughout Old Quebec. It reminded me of the days when I used to walk the ice oval track at a snowmobile event, back when we were still racing. I even found myself taking note of any changes in the pavement, as if I’d be riding on it!

While the race is completely free to spectators, as a guest of Quebec City I had the Leader’s Club Package Plus benefits. Wow — was it ever awesome to be on the inside of the sport!

First of all, I really appreciated being part of the VIP Village, a benefit that’s also in the lower-priced Leader’s Club Package. It put me right on the start/finish line where all the action happens. That was great for taking photos. Plus, I had the big screens to watch as the bicycles spread out around the course. 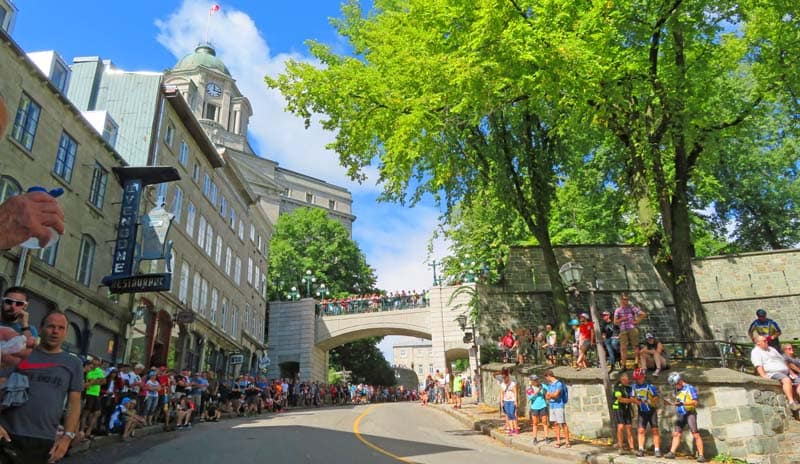 Once I had enough photos, I could relax and enjoy the bar and refreshment service that were part of the package. Quebec is well known for its fine cuisine, and I guarantee that the VIP food offerings were a lot tastier than the hot dogs I ate for a decade at snowmobile racetracks.

For lovers of the sport though, the main reason to purchase a package is to take a lap in the follow-car behind the cyclists with a UCI-Certified driver. There’s nothing like hearing about the race from someone who has been there.

One of the reasons the Grand Prix Cycliste de Québec is held in Quebec is that the terrain is great for cyclists. This very bike-friendly city and area has 400 km of paths. No matter your preference — mountain biking, bike touring, or just a basic ride in the park — you’ll find lots to choose from.

For mountain bikers especially, the elevation changes within the city provide lots of challenges. If you love bike touring, I’d suggest the Between River and Mountain trail, which is 119.5 km (74.3 mi.) long. You may want to visit the museum at Wendat and spend the night in the traditional longhouse or the beautiful Hôtel-Musée Premières Nations, along the way. My stop there was fascinating and I really wished I’d been able to do an overnight.

Click here to check out the main biking paths. 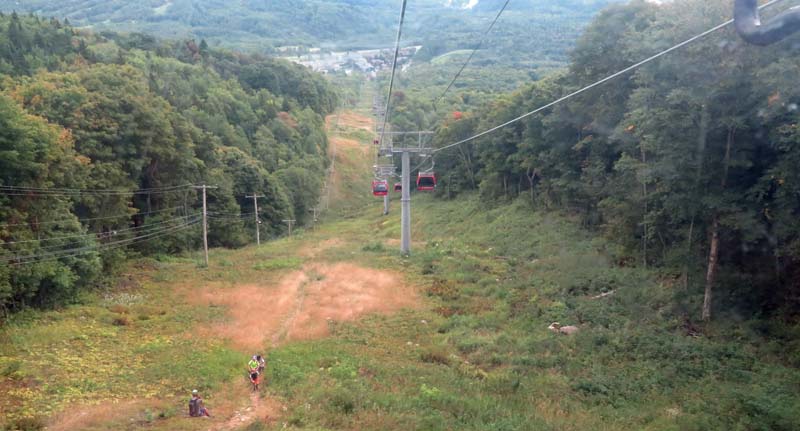 The gondola to the summit of of Mont-Sainte-Anne gives a spectacular view of the valley below. While I’m not big on heights, I enjoyed every minute of the ride to the 800 meters (2625 feet) high summit.

However, I was surprised to see all the mountain bikers below me!

In fact, many bikers take the gondola to the top with their bikes then ride the trails. The trails are open from spring through to fall, although the days and hours they’re open depend on the season. Check out the schedule here if you’re into some extreme biking: Mont-Sainte-Anne.

For information on visiting Quebec City, check out their website:
https://www.quebecregion.com/en/

I’ve visited Quebec City a number of times throughout the year, and you can read more about my adventures in the related posts below.

I attended the Grand Prix Cycliste de Québec during a trip to Quebec City hosted by Destination Quebec and Tourism Quebec. Thanks again for an amazing experience!

More Things to Do in Quebec City

Get the ultimate adrenaline rush at the Canyon Sainte-Anne Via Ferrata where you go rock climbing above the rushing rapids of Sainte-Anne-du-Nord River.

The photo above was taken by Linda Aksomitis at the Grand Prix Cycliste de Québec in Québec City, Quebec, Canada. 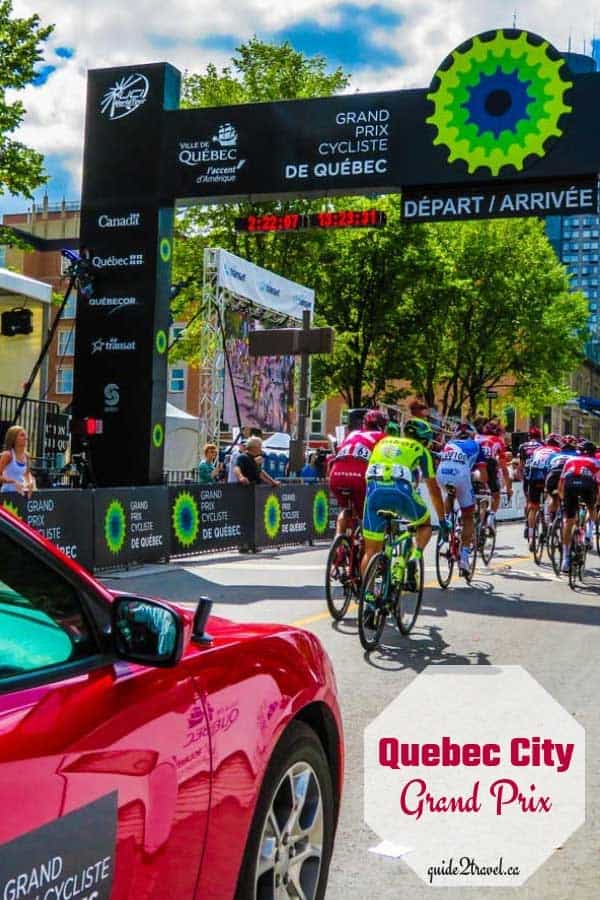 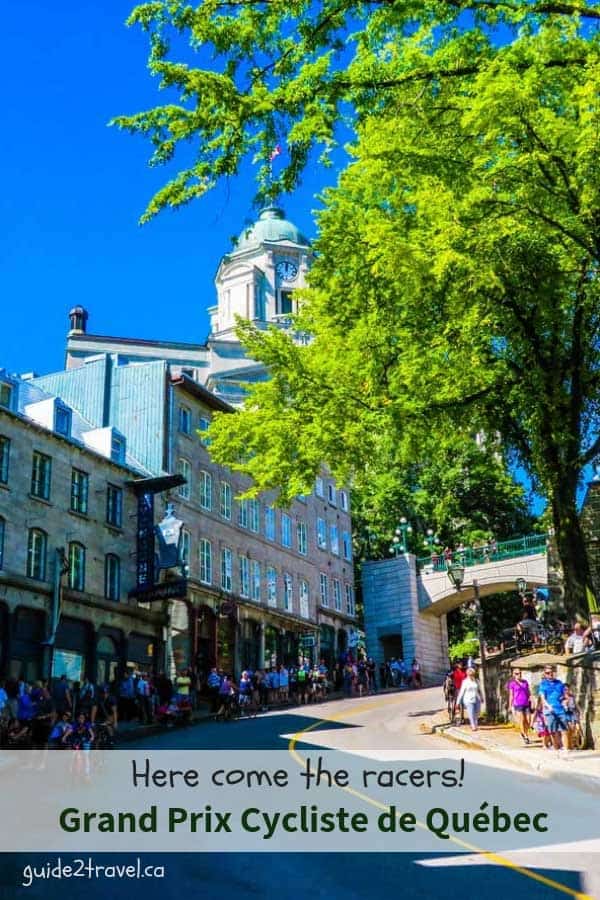