At first glance, Berry College looks more like a European castle and grounds than a school. But while it is a school offering a wide range of majors and minors, it’s also one of Rome, Georgia’s, most popular attractions. And I can guarantee you’ll find fabulous fall walks at its historic places!

Martha Berry, who founded the College, ranks among Georgia’s most prominent women in the first half of the 20th century. Her idea — and investment of both time and money — provided hundreds of poor, yet academically capable, children to get an education. She started in 1902, providing a boarding school for boys, then seven years later, welcomed girls as well.

In fact, in 1930, Good Housekeeping Magazine named Martha Berry as one of the nation’s 12 most influential women. 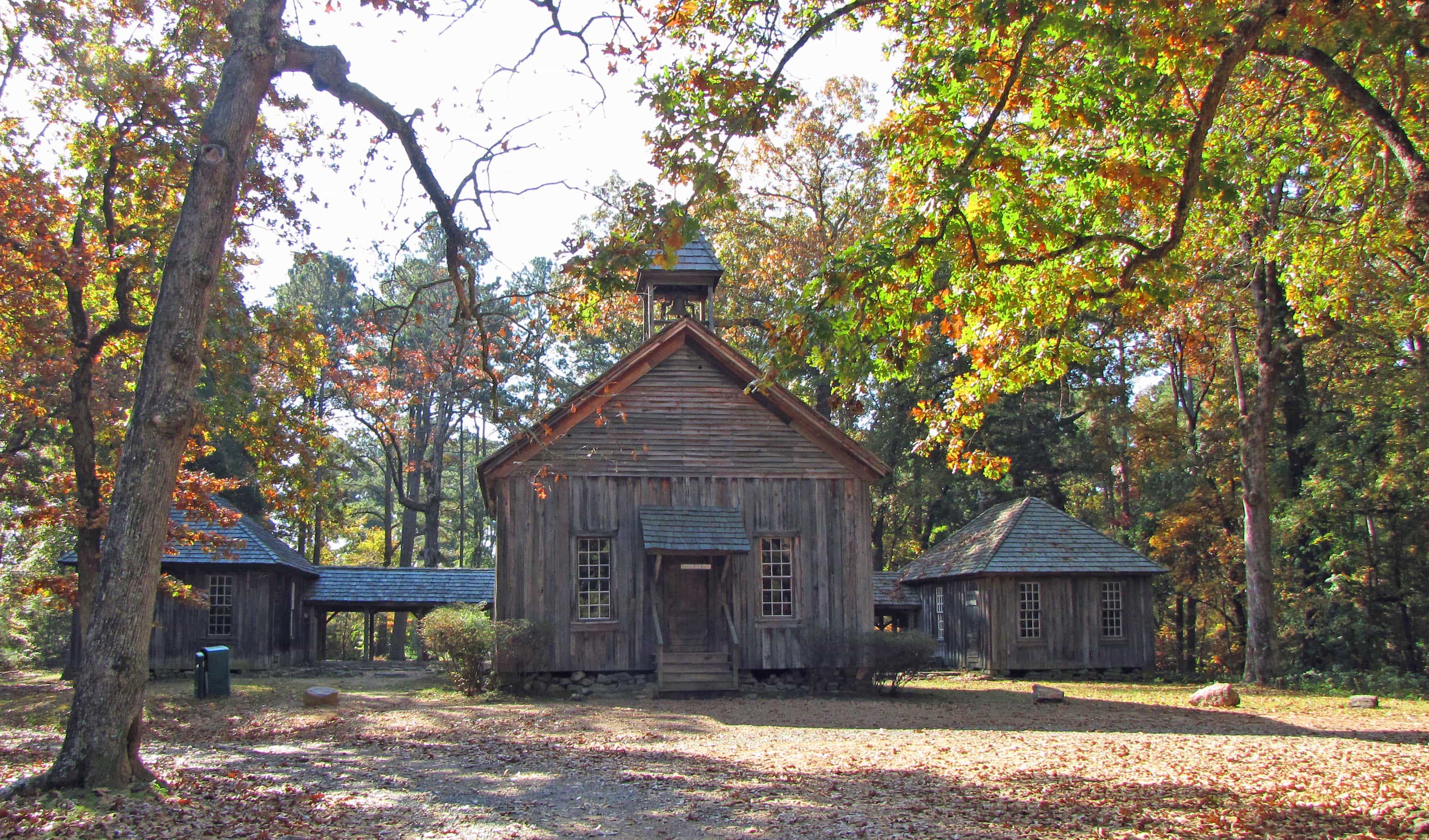 With 27,000 acres (110 km2), Berry College possesses one of the largest contiguous campuses in the world. As you can imagine, that means there are lots of fabulous fall walks that allow you to explore the campus’s many historic places. Possum Trot is one of them.

Before she started the campus, Martha Berry worked with local young people. Around 1900, she had decided the abandoned Possum Trot Church in the Possum Trot Settlement would serve her purposes. So, she had it repaired and began to hold Sunday School classes in it.

Three classrooms were added in the 1930s. These served as an elementary school for local children off and on until 1954. A homecoming is still held there every year, on the third Sunday in September. 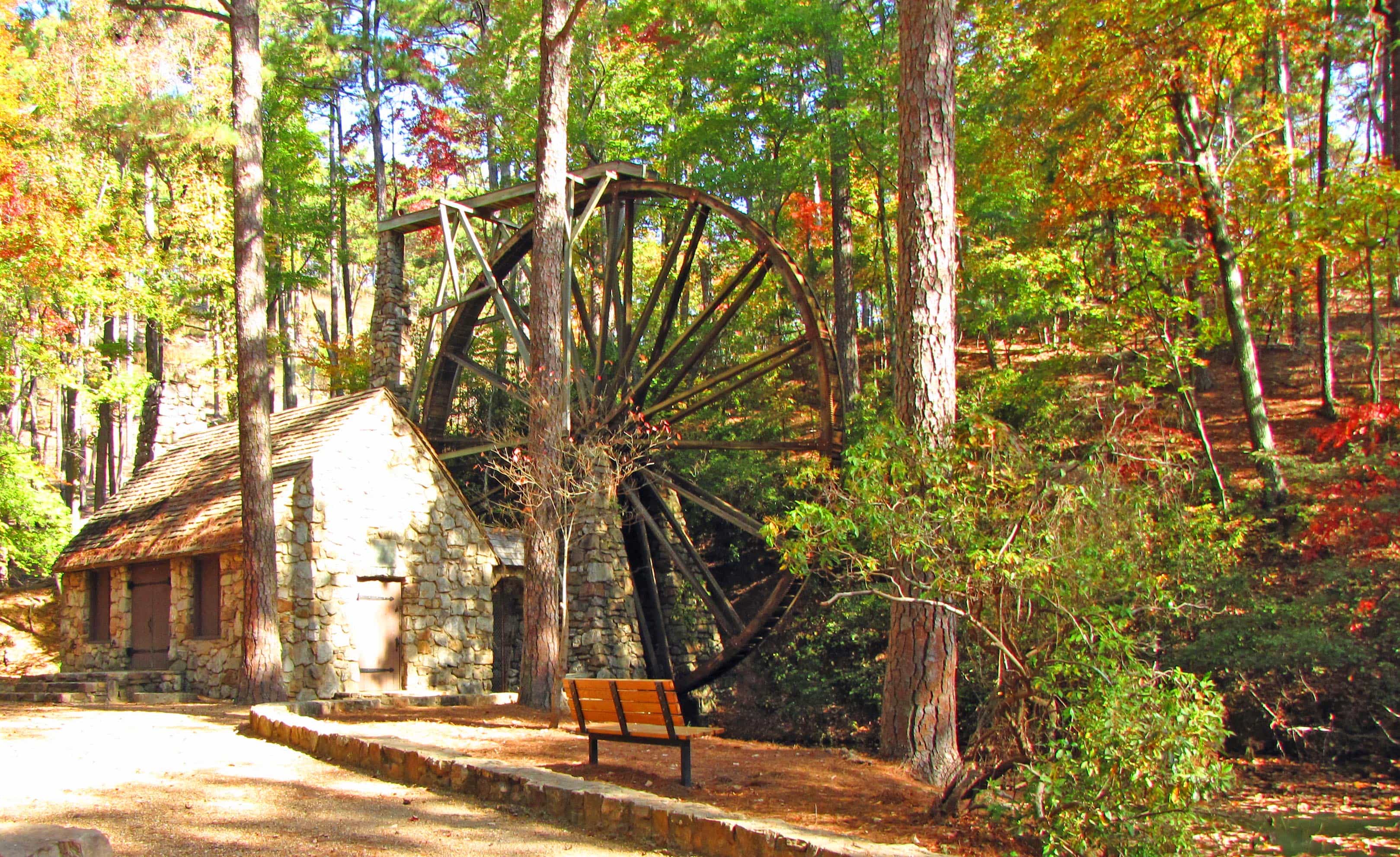 Old Mill at Berry College in Rome, Georgia — an amazing place for some fabulous fall walks.

In fact, the 42 foot diameter wooden overshot waterwheel is considered one of the largest in the world. Its iron hub was donated by the Republic Mining and Manufacturing Company. What’s even more remarkable is that student workers built it at the college in 1930.

After the mill was built, students, along with a miller who supervised, ground corn that was used in the college kitchens. It ran using water pumped from Berry’s reservoir lake.

I found the wheel and small stone building, where they nestled in the colorful fall foliage, one of the most photogenic fall sites I’ve every run into! 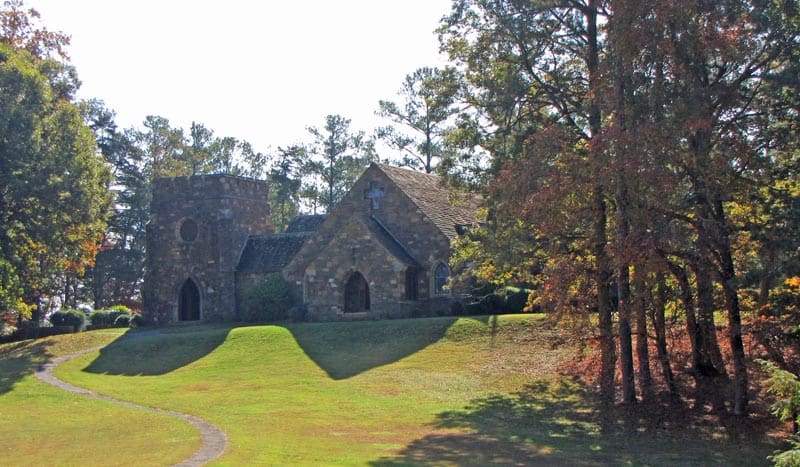 In 1937 the Frost family donated money for a chapel. They had admired the religious life at Berry, and decided to honor their son’s life with a cash donation for a chapel after he died of polio. The students and staff did all the construction work.

Frost Chapel held weekly services for the Berry School for Boys and Berry Academy until 1983. Now, the historic stone building provides a serene spot to enjoy the fall foliage. 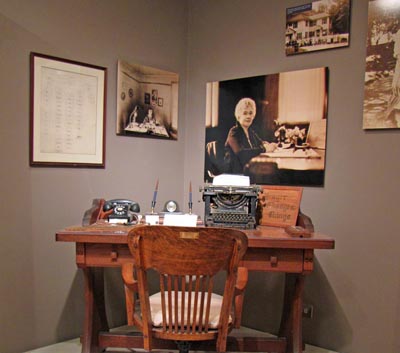 The Martha Berry Museum opened in 1972, along with her home, Oak Hill. The museum’s most important permanent display is a Timeline Exhibition about the college. My favorite artifacts included Martha’s personal typewriter and a spinning wheel used to train the first girls’ classes in mountain crafts.

While she had many students, Martha’s dedication to helping those least fortunate really showed with Eugene Gunby’s story. Eugene couldn’t walk, but still wanted to go to school. So, Martha had students build him a three-wheeled cart that resembled a tricycle. He used it to independently get around the school. Later, Gunby became a judge in Fulton County.

In addition to information about Martha, the museum is also home to an art gallery and temporary exhibitions. 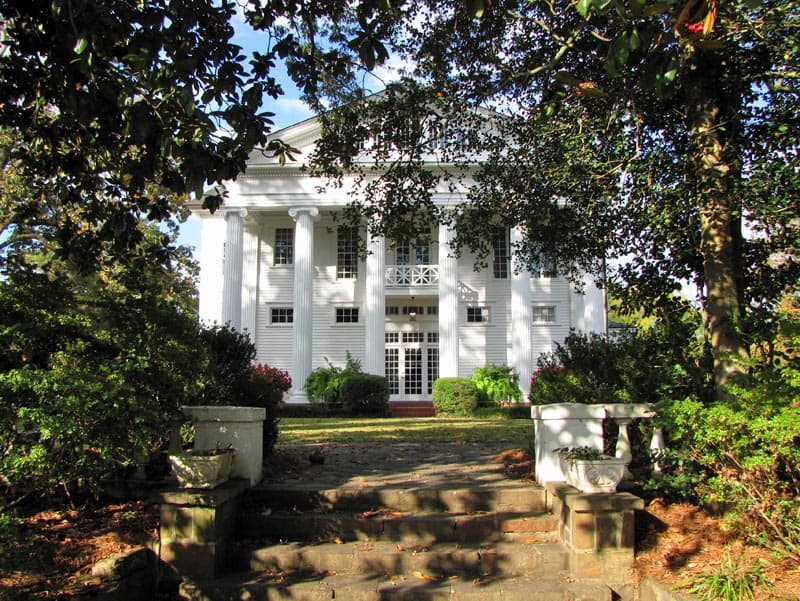 Originally, a Victorian farmhouse built in 1847 stood where Oak Hill is located. Indeed, Union soldiers stayed in it during the Civil War. In 1884, about a dozen years after the Berry family purchased it, the farmhouse burned down and was rebuilt as a Greek style revival home. That’s when it became Oak Hill.

Tours guide visitors through the home and its original furnishings, along with the outbuildings and gardens. Take an fabulous fall walk down the easy bridal path while you’re there, or enjoy the colors of the Sundial garden no matter the season. I particularly enjoyed visiting the carriage house, with many of the original vehicles, from carriages to cars, that Martha owned. Her last? A 1940 Mercury.

Oak Hill and the Martha Berry Museum are open year-round. For hours of operation, click here to check online.

On the Web at: http://www.berry.edu/oakhill/

I visited Berry College, Oak Hill, and the Martha Berry Museum as a guest of the Greater Rome Convention & Visitor’s Bureau. See: http://romegeorgia.org/visit-rome/

What fabulous fall walks have you taken?

Please share your fabulous fall walks in the comments below!

More Things to Do in Georgia

Travel Georgia–Stay at the Lake Blackshear Resort and Golf Club

Check out the upscale Lake Blackshear Resort on the man made Lake Blackshear, with its 97 miles of shoreline that includes cypress flats, flooded timber, hidden coves and secret fishing holes.

The shores of Lake Burton, Georgia, are rich in flora and fauna—over 4200 plant species to be exact. But there’s a richer tale to be told about the bottom of the lake. There, you’ll find storefronts and homes, hitching rails and sidewalks, chimneys and woodpiles, all...
Read More

Old Sautee Market – Sautee-Nacoochee, Georgia I enjoy fine dining, but even more than that, I like finding new spots and trying food that's a little quirkier, whether it's in the preparation or the seasonings. It's all about the taste! Any eating place that features a...
Read More

I visit the deep south of the U.S. every year for a lot of reasons--one of the main ones, I have to admit, is for southern cooking. I've got a lot of favorite foods and restaurants, so thought I'd share my thoughts, er, tastes, with you. Georgia's state prepared food...
Read More

The photo in the header is of colorful fall foliage at Mount Berry, Georgia, USA. Photo credits & author: Linda Aksomitis. 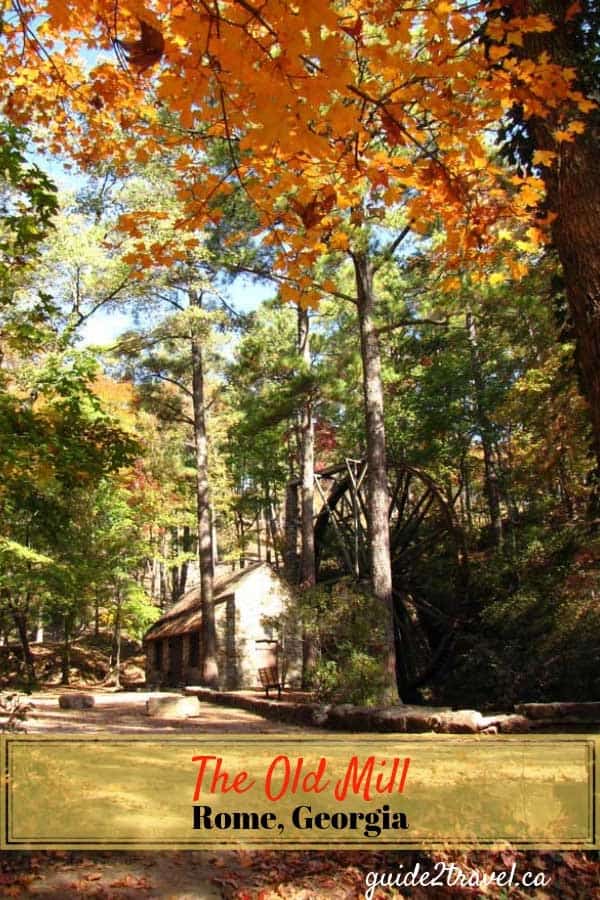 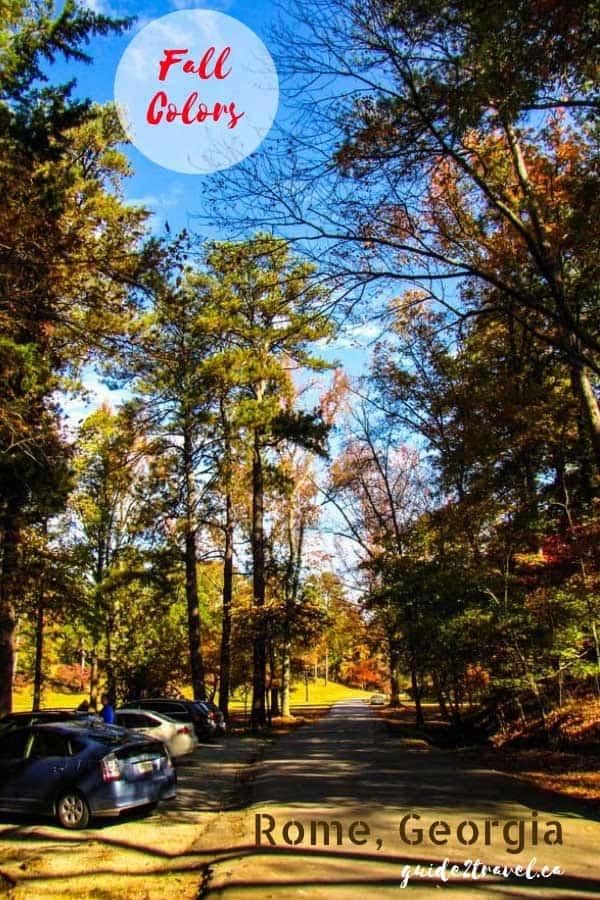 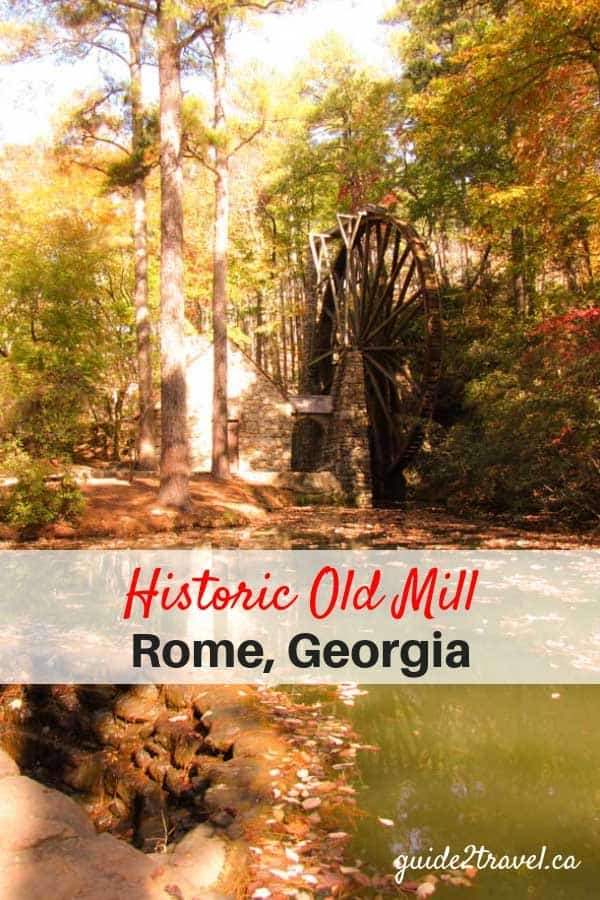