Before World War II, Fort Nelson, British Columbia, was a fur trading post that had changed little in 135 years. Change, when it happened, arrived overnight. Canadian government airplanes replaced sled dogs when an airport was built, in 1941, as part of the Northwest Air Staging Route. US Army troops took over from the trappers, pushing their way through the Northern muskeg, building the Alaska Highway in 1942. Today, the Fort Nelson Heritage Museum archives that history of transportation, and preserves the machinery of the past, along with other artifacts, to tell the community’s story.

The Fort Nelson Heritage Museum is at the Alaska Highway’s historic 300 mile marker. We found the museum one of the most interesting stops on our road trip for the 75th anniversary of the highway being built. Here are some of our favorite discoveries. 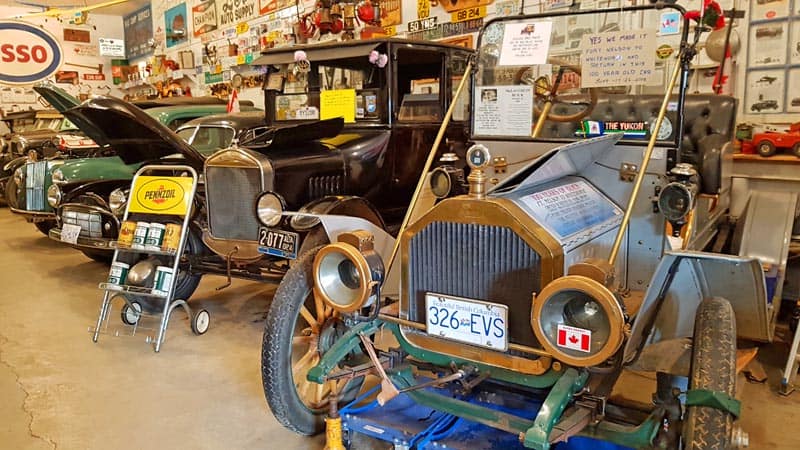 History of transportation antique cars and trucks in the Fort Nelson Heritage Museum.

Marl Brown, a Canadian Army mechanic, was the driving force behind the Fort Nelson Heritage Museum. As he watched machines and equipment being destroyed when they were no longer usable, he became determined to save what he could. His main interests lay in the machinery of the past used on the Alaska Highway. However, he also built a prized antique car and truck collection.

The Buick is the first car in the photo above. Brown drove it from Fort Nelson to Whitehorse (590 miles each way) and back, in 2008, to celebrate the car’s 100th birthday! It would be nice to think of my Buick as lasting that long…

Other cars in the collection range from a 1924 Dodge four-door sedan to a 1955 Studebaker. There are also lots of vintage license plates and memorabilia. 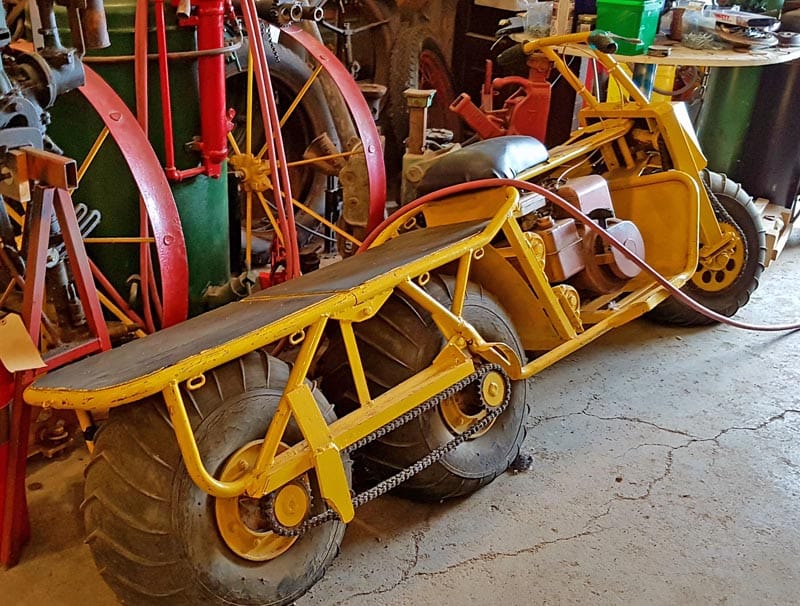 We’re all about the finding the rare and well preserved machinery of the past and this Trail Partner fit the bill!

The information card with the Trail Partner indicated it was built in the late 1950s to early 1960s in Prince Rupert. About 300 of these machines — also called bush bikes — made travel through the north easier. With three wide tires and all-wheel drive, it must have been quite the experience to drive through Fort Nelson’s Boreal Forest. 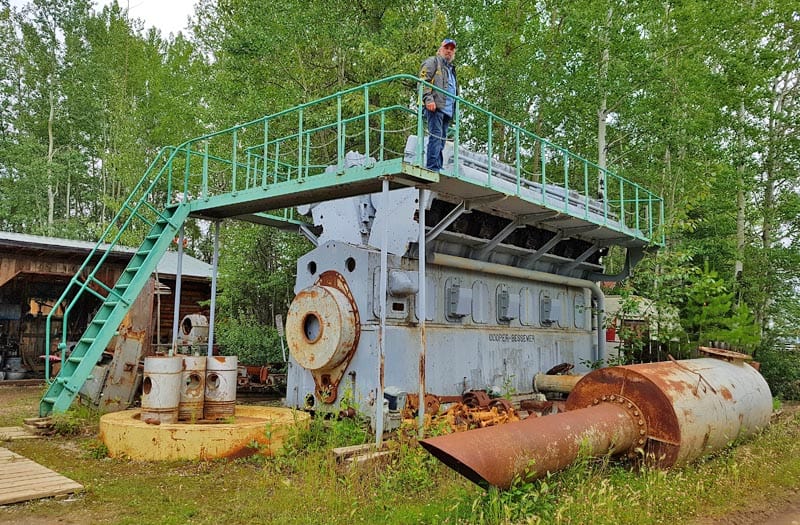 Machinery of the Past: David Aksomitis standing on top of a 4210 horsepower engine at the Fort Nelson Heritage Museum.

The bigger the engine, the better, as far as David is concerned. And I’ve never seen an engine larger than this 4210 horsepower Cooper-Bessemer that he’s standing on top of.

What did it do?

It drove the generators for Fort Nelson’s power plant a few decades ago. And if you’re interested in the rest of its details, it has: 4210 horsepower at 327 RMP, 16 cyclinder, 15.5 inch bore and 22 inch stroke.

A plate on the motor indicated that BC Hydro still possesses five of these engines for stand-by power. However, since the tag didn’t provide a year, it’s hard to know if that’s still true. 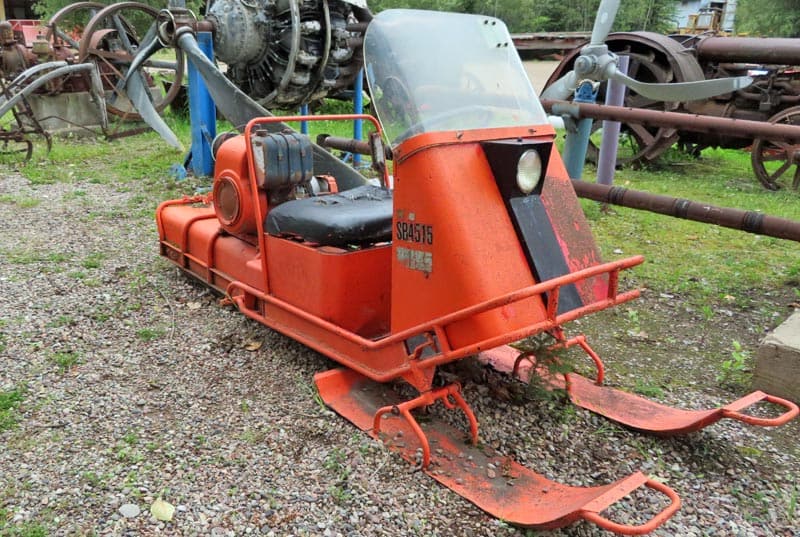 Snowmobiles, of course, always top the list of vintage machines we look for in history of transportation museums. While this sled didn’t have an information sheet on it, since it was sitting outside, we asked inside and found out it was built by the Fox Corporation.

Since then, I’ve been able to identify it as a Fox Trac Snomobile, manufactured by Fox Corp. They were made between 1964 and 1972 in Jamesville, WI. This rear engine model appears to be a 1964.

A survey by VintageSledders.com found old Fox Trac models from California to New York. So, it would be interesting to know how this one ended up in Northern BC! 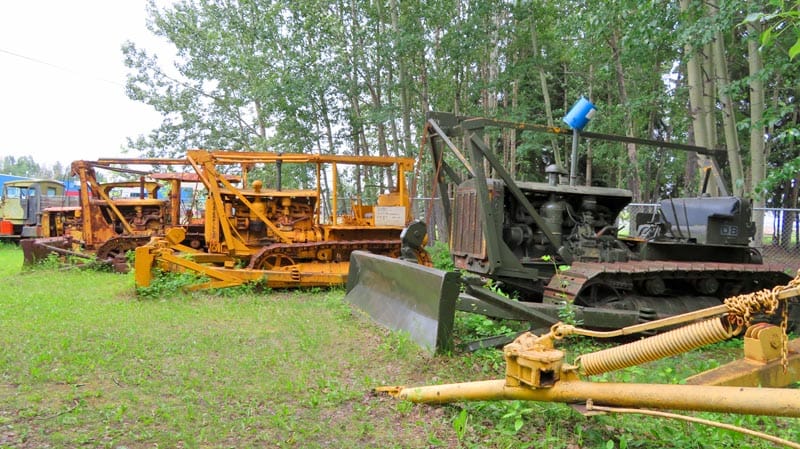 Machinery of the past heavy equipment at the Fort Nelson Heritage Museum.

Few of the machines used to build the Alaska Highway survived the years. Luckily, Brown salvaged some collected at the Fort Nelson Heritage Museum.

The machines in the photos above and below are from this part of the outdoor collection. On the day we visited, we talked for quite awhile with a local volunteer keeping grass and trees clear of the machines. One of the museum’s needs, he said, included time to collect and document the history of the vintage machines.

Machinery of the past at the Fort Nelson Heritage Museum.

Indeed, each machine tells a different tale. The antique drilling rig documents the history of the local oil patch — the leading industry since the 1960s. Currently, the area has three major shale gas reserves in production.

As well, the line-up of old caterpillars show changes along with the Alaska Highway. Originally, just a dirt road 1422 miles long, the highway is now completely paved and shorter, at 1382 miles with improved routes. 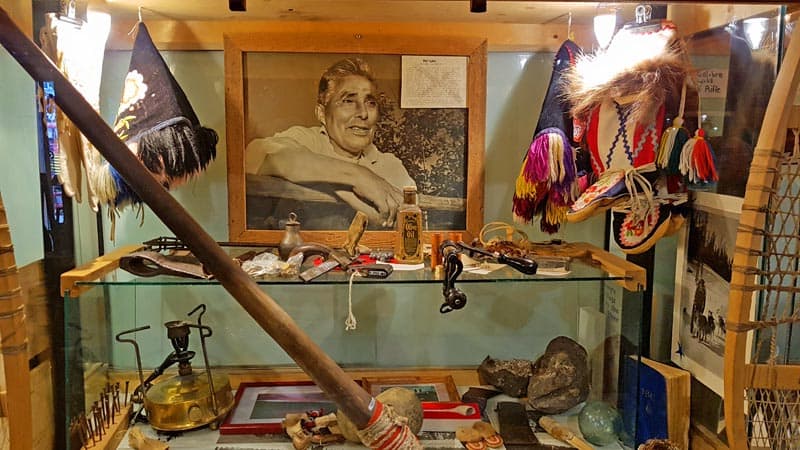 The museum’s log building unfolds like a magical time machine with various artifacts and stories. While the main focus is the history of transportation, many of the displays inside the museum pay tribute to the time before the WWII changes.

Here, you’ll meet the people and hear their stories. My favorite? The display dedicated to Baptiste Villeneuve, a Special Game Warden.

Villeneuve was a member of the BC Game Department established in 1929 by the province. Members of this service held two posts, one officially and one ex-officio. So, they were either game wardens or police officers, but had authority in both capacities. The program disbanded in 1950. 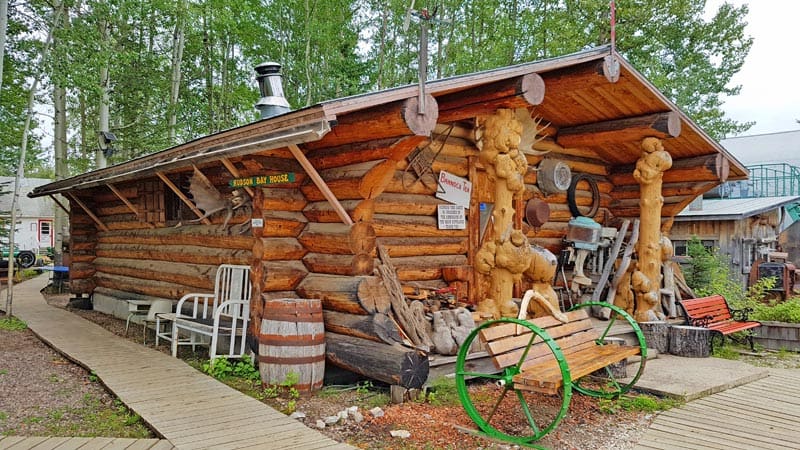 Various buildings from the community also end up with permanent spots in the museum. The original buildings moved here include: an Anglican church, the town’s old post office, a Hudson’s Bay house removed from the town’s fort, a trapper’s cabin and a blacksmith’s shop.

A number of these buildings are open to go through and see original artifacts too. The Hudson’s Bay house, above, is a log cabin from the turn of the 20th century. Beautifully preserved, it looks like you could just open the door and step back a century.

The museum is open seasonally, from May through August, and has a small admission fee. Check dates open on their website at: http://www.fortnelsonmuseum.ca/

Have you visited? Please tell us about your favorite part of the collection in the comments below!

The photo at the top of the page was taken at the Fort Nelson Heritage Museum. The museum is located at Mile 300 on the Alaska (ALCAN) Highway. 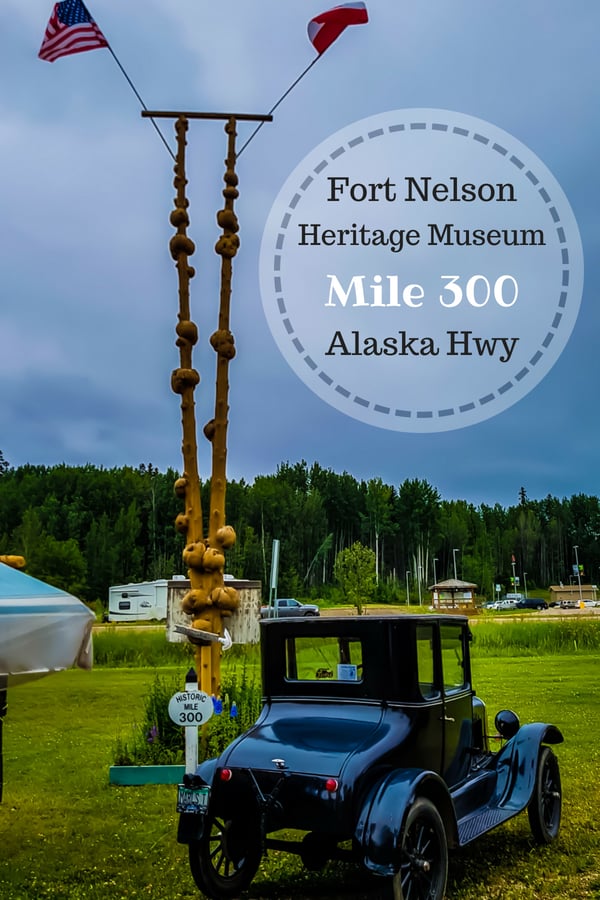 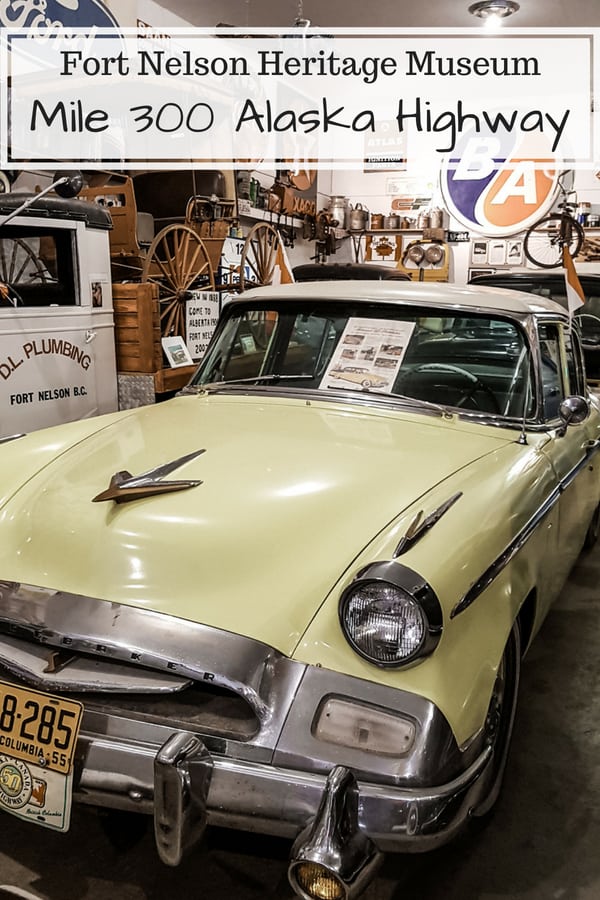 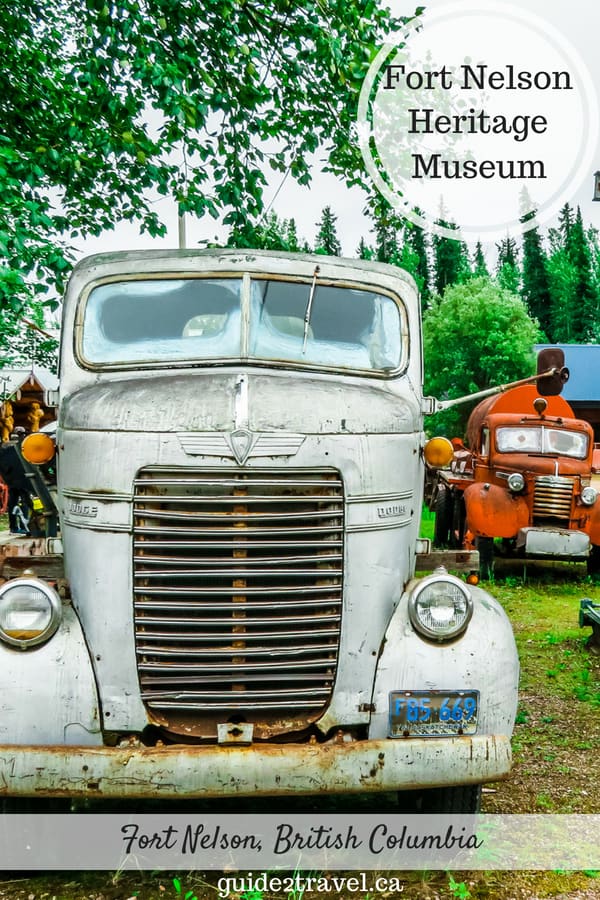