Keeping the English Pub tradition alive with every pint they pour!

Winston's English Pub & Grill is one of downtown Saskatoon's most popular evening spots.
;

A traditional English pub was the focal point of community life. Here, you could drink your “pint,” relax and trade stories with friends, even make a deal or two. Saskatoon, Saskatchewan’s, popular Winston’s English Pub & Grill captures the traditional pub atmosphere as well as adding its own unique spin on English cuisine.

Saskatchewan, especially in its many small towns (I live in one of our 400+ towns and hamlets), has long valued the centuries-old English pub tradition. My great-grandfather, back in the 1930s, upheld it by heading to the bar for a pint of beer every day until he died at the age of 91. I guess I inherited those genes, since no matter where we travel our favorite evening activity is checking out the local bars, taverns and pubs.

While I don’t think the province quite matches the 1577 English high count of one drinking establishment for every 200 people — we do have a lot of pubs to choose from. 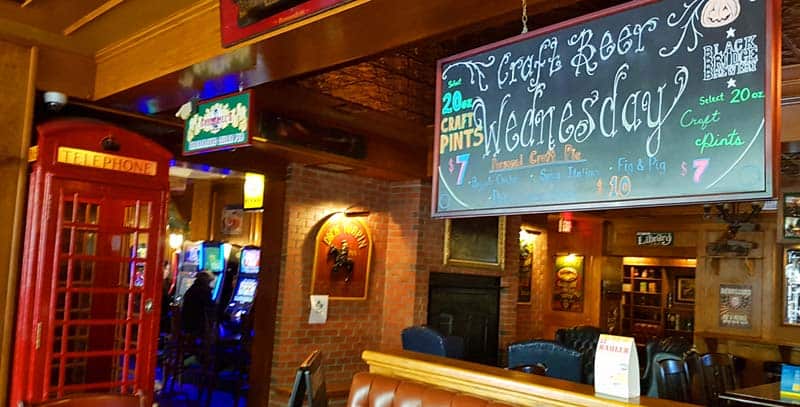 I visit Saskatoon a couple of times a year, mainly because it’s a popular conference city. And I’m always happy when the conference events are in the downtown, so I can spend a few hours at Winston’s.

Well, Winston’s readily captures the feel of the old English pub. Its contrasting dark stained wood furniture and lighter shades of wood paneling immediately create a mood of luxury from the stagecoach era of travel. During that period in England (mid-1700s to mid-1800s) the affluent enjoyed a lot of pampering! While bumping along all day in a stagecoach might not be a smooth as today’s car travel, it sure beat hanging on outside.

Other parts of the decor at Winston’s move us further along in time. I especially loved their iconic red telephone box (or booth) and the Dick Turbin picture hung near it. And who better to have a permanent place on a pub wall than England’s famous highwayman from the early 1700s?

However, if you’re looking for something a little more romantic, Winston’s has that too. They also provide comfy armchairs in front of the brick fireplace for a cozy tête-à-tête with a special someone. 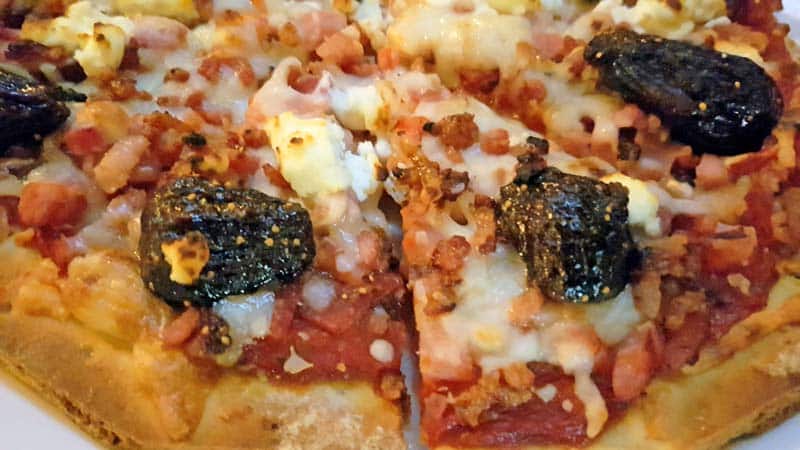 Ultimately though, a pub is all about the beverages. It seems that England’s beverage pubs may have had their beginnings in 43 BC when the invading Romans brought their tabernae, or shops that sold wine. The penchant for wine didn’t catch on, but the shops did. Soon the ales began to flow.

Interestingly, until the 14th and 15th centuries, British ale was made without hops. The beers we drink today, brewed with hops, first appeared in France in the 800s. Three centuries later, the Germans adopted it and the German Purity Laws came into being in 1516. Not familiar with them? They defined the only four ingredients allowed in beer-making as: water, barley, yeast, and hops.

Luckily — in my opinion anyway — Canadian brewers sometimes improve upon that list of four ingredients by adding things like fruit. Indeed, my favorite beer at Winston’s is Granville Island Raspberry Ale. I’m also happy to report that Winston’s serve cider on tap now too, both an apple and a pear.

Hungry? Winston’s has a neat food menu to go with their fine whiskys and 72 taps. Their menu contains options you might expect: English fish and chips, bangers and mash (bratwurst sausage and mashed potatoes), and English style tourtiere. But it’s also got some surprises. Ever tried butter chicken poutine or bacon wrapped poutine? (Poutine from Quebec has become a Canadian favorite!) How about fig and pig craft pie? It was the evening special and absolutely delicious! Mind you, how can you go wrong with smoked pork and sweet figs on a pizza? 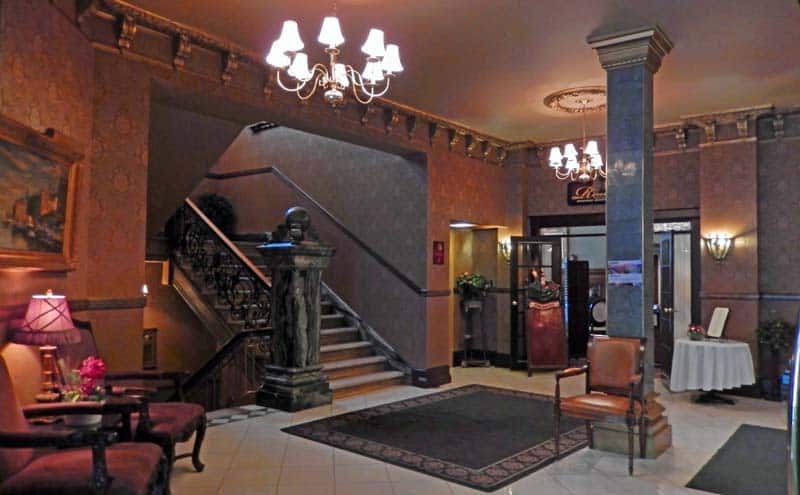 Lobby of the Hotel Senator in Saskatoon, Saskatchewan.

The Hotel Senator and Winston’s English Pub & Grill share a single historic building in downtown Saskatoon. Built in 1907, the hotel is an historic property that’s now classed as a boutique hotel.

While it’s been a few years since I stayed at Hotel Senator, I have to say it had all the comforts you’d expect in a modern hotel. It also has the elegance of a property constructed with attention to detail using marble and fine wood paneling. Well ahead of its time, the hotel (then called the Flanagan) had steam heat, hot and cold running water, and telephones in every room from the beginning.

Check out the hotel at: https://www.hotelsenator.ca/our-hotel.html

Winston’s and the Senator Hotel are both located conveniently in beautiful downtown Saskatoon. Whether you’d like a romantic walk around the South Saskatchewan River or access to the city’s best shopping mall, it’s a great destination. 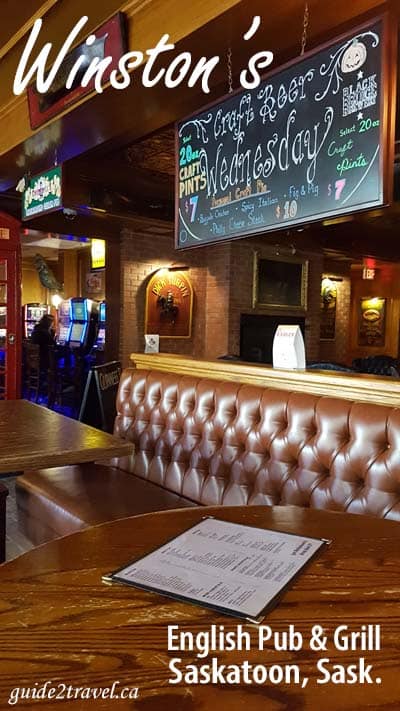 Life in Canada in 1882 was more often one of hardship, than not. However, for a select group of English immigrants, Cannington Manor promised--and delivered over the next decade and a half--the life of an English Squire in Saskatchewan. From glee club and Town Hall...
Read More

Kayakers dip their paddles into the creek waters, still warm from a dry, hot summer--their path, however, is nearly blocked by a jagged row of rocks. The first man chooses his line, pushing towards the creek side, where his kayak lodges. The second, cheering as he...
Read More

Hopkins Dining Parlour in Moose Jaw: Fine Dining and the Most Ghosts

A night out in the historic Hopkins Dining Parlour in Moose Jaw is guaranteed to have a tasty meal — and if you’re lucky, an encounter with a ghost!

There's nothing quite like getting up in the morning to see the sun glinting off a northern Saskatchewan lake out your window--even if that lake is covered with snow! The quiet little community of Green Lake is among Saskatchewan's oldest, having been established as a...
Read More

Some nights the best place to be is a dingy bar out in the middle of nowhere--or at least a somewhere that's equipped with a bottle of booze and a piano. Sam Galahad finds just that somewhere in the The Red Eye Lounge, with the piano player, Buddy Toupee. If you're...
Read More