Do Ghosts Really Haunt the Frontier Prison in Rawlins, WY?

Once home to outlaws, horse thieves, murderers and more...now a museum said to be haunted by ghosts.
G

At first glance, the Wyoming Frontier Prison, in Rawlins, Wyoming, seems to be a sedate, sandstone building that might have been built as a library, or museum, its current role. But the bars on the windows give clues about its unquiet past. 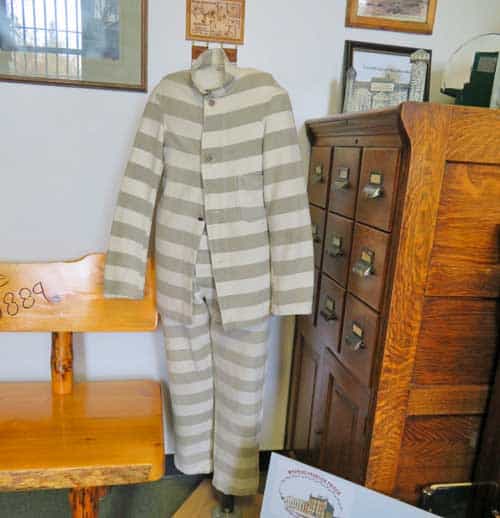 Indeed, in the eighty years from 1901 to 1981, during which it served as a penitentiary, some 13,500 inmates called it “home.” However, as David and I learned on our visit, the Frontier Prison lacked any of the warmth of a place most of us would want to call home.

When Wyoming neared statehood in 1890, the state made plans to build and manage its own penal system. Earlier, during its years as a Territory, the Federal government had built and managed the Wyoming Territorial Penitentiary at what’s now the city of Laramie.

However, money was tight for the new state, and it took awhile to actually get the new prison built. And there certainly weren’t any frills or luxuries included in the costs. 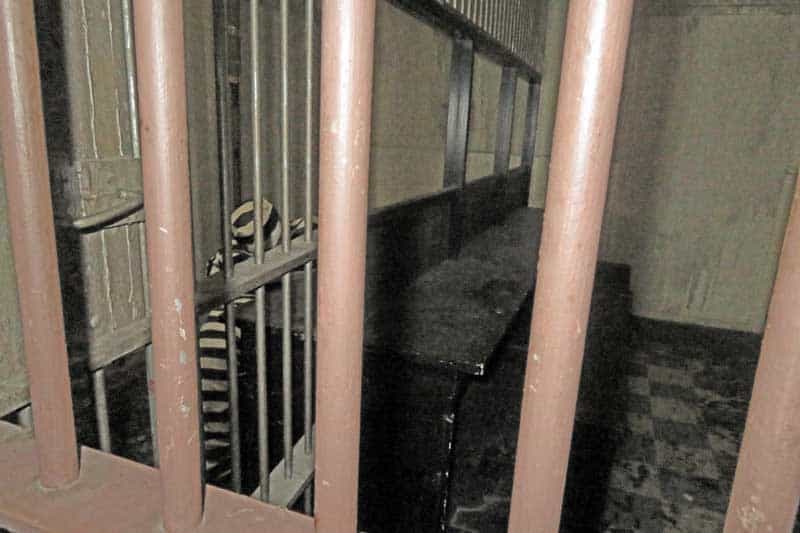 One of the oldest cells at Wyoming Frontier Prison.

Originally, none of the cells were heated. If prisoners were lucky, the temperature stayed at 20 degrees or so warmer than outside even on freezing winter days until radiators were installed in some parts of the prison. Then, these areas could be heated all the way up to 50 degrees! Parts of the prison never did get heat, as we learned on our early June tour. Whether the shivers I felt were from the passing ghosts of those who had lived in the frosty cells, or the lightweight sweater I wore — I couldn’t tell.

As we learned from our tour guide, Dawn, the prison was built at the end of the wild west in early 1900s Wyoming. There weren’t a lot of standards in security, so the prison staff had to learn on the fly. One of the first things they discovered was that prisoners didn’t have much trouble picking the skeleton key locks on the first cell doors and attempting escapes. After all, those locks were pretty simple. 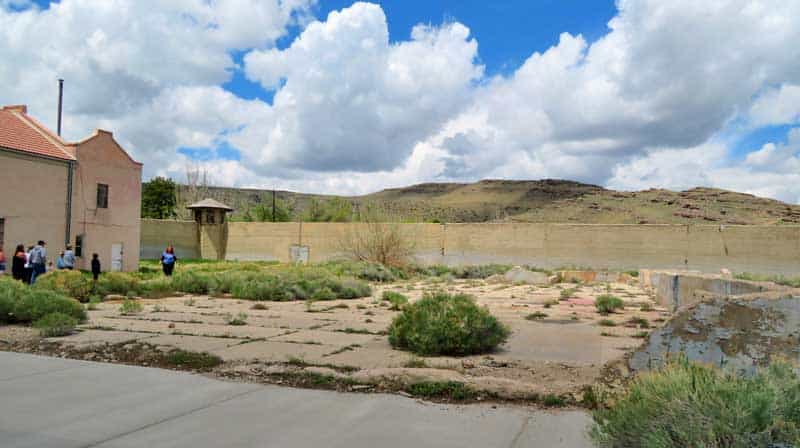 In fact, the prison had to replace all those first locks with something more secure. And if you’re thinking a different kind of lock, you’re almost right. In 1917, the prison installed the Boston Bar system that could lock down an entire tier with a single switch.

Prison life in the early 1900s was anything but fun. While prisoners may have spent their days shivering, they were at least fed. In fact, prisoners loved kitchen duty, the best job in the prison. Early on in the prison’s history, an elderly woman, Esther Higgins, even brought home baking for the entire population. Needless to say, she was well-loved by everyone — almost.

Whatever his grudge against Esther, in 1912 an escaped prisoner accosted the 70+ year-old woman and raped her. His time might have been better spent disappearing into the frontier though, as he was caught soon after. A lynch mob inside the prison ensured he’d never do it again!

During the 1950s expansion, authorities added a dining room. They commissioned one of the prisoners, Arthur, to add artwork to the walls. You can still see them today — a gentle contrast to the machine-gun-toting prison guard who actually watched the men eating back in ‘the day.’

But all prison activities weren’t as cordial as eating. Oddly enough, showers provided lots of hectic moments, including the death of one guard. Prisoners, it seems, didn’t care for the cold showers — hot water arrived late, just a few years before the prison closed. In fact, fights often broke out between the men as prisoners from 40 cells gathered under the care of guards, armed only with high pressure hoses, sprayed down those who didn’t voluntarily clean up.

Ghosts of the Frontier Prison 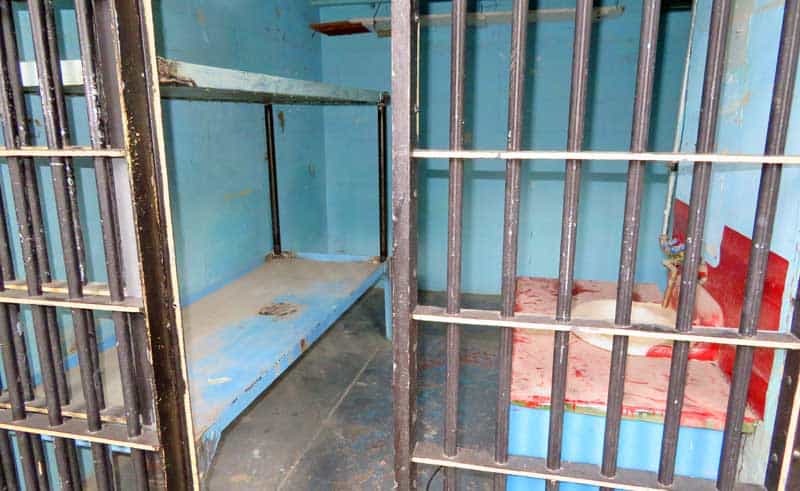 One of the newest cells at Wyoming Frontier Prison.

Not all of the prisoners of the Frontier Prison lived to walk away. In fact, a number were executed — some believe their ghosts still walk in the dark places around the prison.

In the beginning, Dawn explained, there was a self-executing system in place. I, of course, had to ask how it worked and she readily explained.

The execution chamber — or room — was on the second floor. And as was customary in the old west for those sentenced to meet their maker, the sentence was death by hanging. Ideally, the men in the gallows died quickly of a broken neck. However, it seems that only four of the nine on death row here during that period were so lucky. The others all had to hang until the life squeezed out of them. Now, that makes it easy to see why they could still haunt the gallows.

In 1931, the prison added the gas chamber illustrated in the sidebar.

To me, the cylinder looked more like something a science fiction writer from the 1800s might have described to descend into the depths of the sea rather than a chamber meant to gas someone to death. However, I guess it had the advantage of being small, so didn’t require a lot of gas to end a life.

Of course, there are also other parts of the prison that are particularly gruesome, like the sensory deprivation room — here, prisoners were kept in absolute darkness — and not even allowed to lie down. Indeed, it was a time when being condemned to a Federal penitentiary was definitely something to be avoided. However, there were those who still took risks, wagered their freedom and lost.

Interested in learning more about the ghosts at Frontier Prison? Spend some time with these investigators at Paranormal TV! I didn’t find any ghosts during my daytime visit, but their nights turned up a lot of paranormal activity.

Visitors to the museum have free limited access to a few exhibits but must join a tour to see the interior of the prison, so you’ll need to check the website for hours. There’s a small admission fee, which must be paid in cash. Check the website to confirm the current fee.

If you’re interested in ghost hunting, the museum has various events each October (it’s closed for regular touring through the last two weeks of October).

For more information on the history of the prison, see this Wyoming history website:
https://www.wyohistory.org/encyclopedia/wyomings-first-state-prison

Find More Things to Do in Idaho and Wyoming

The Frontier Auto Museum is absolutely amazing — step back to 1950s and ’60s cars, a stocked auto garage, toys, petroleum collectibles, and more.

Devil’s Gate is a Wyoming landmark registered on the National Register of Historic Place. The site is in the Rattlesnake Mountains on the Sweetwater River.

The photo in the header above was taken at the Wyoming Frontier Prison at 500 W. Walnut in Rawlins, Wyoming, USA. 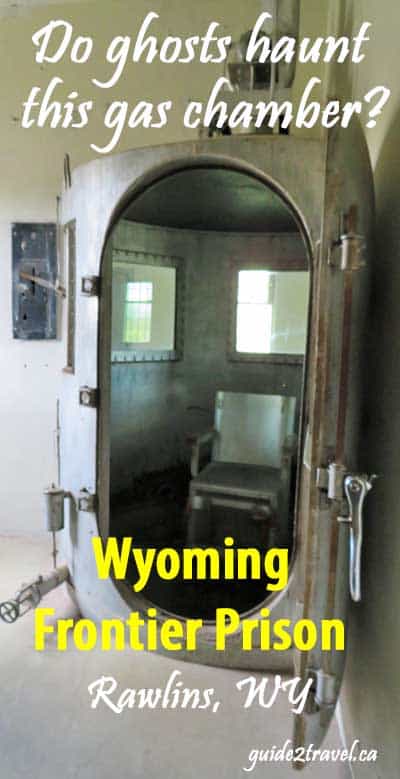 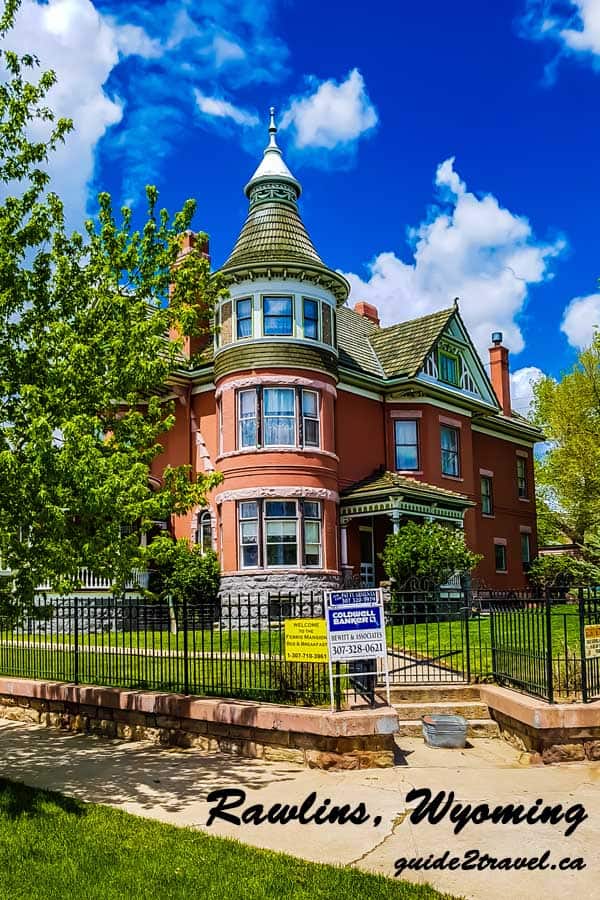