Discover the legends of the drivers and their cars, plus drive your own NASCAR race, try your skills on a pit crew, and more!


There’s no doubt that NASCAR is one of North America’s most popular spectator sports. In fact, fans can catch one of 1500 NASCAR races at 100+ different tracks in any given season. From the biggies in the Monster Energy NASCAR Cup Series, like Indianapolis (Brickyard 400) and Daytona (Daytona 500), to the smaller cities of Saskatoon (Saskatchewan) and Antigonish (Nova Scotia) on NASCAR Pinty’s series, there’s something for all race car drivers and fans.

So, it’s no surprise that the NASCAR Hall of Fame provides the ultimate destination for lovers of the sport! 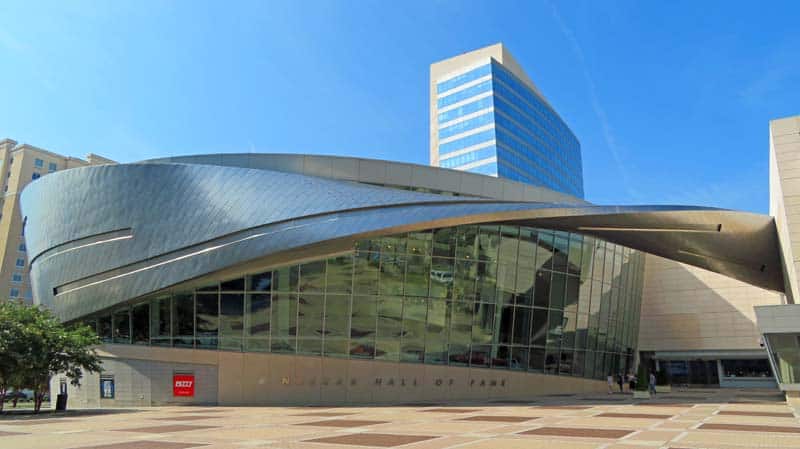 NASCAR Racing & the Days of Prohibition

While race cars run on high octane fuel these days (98 octane), the sport actually got its start from another kind of high octance liquid. What was it? Moonshine, of course! Back in the days of prohibition, moonshine was the only kind of alcohol available.

And if you’re wondering how racing connects to moonshine, it’s all about keeping one step ahead of the lawmen and Bureau of Prohibition — also known as revenuers. In fact, a whole generation of mechanics and drivers developed their skills by transporting moonshine from the secret spots it was brewed, and selling it (bootleggers) at the secret spots where it was consumed.

Junior Johnson, one of the best-known bootleggers-turned-racers in NASCAR history, actually built the still on display at the NASCAR Hall of Fame. (See below) 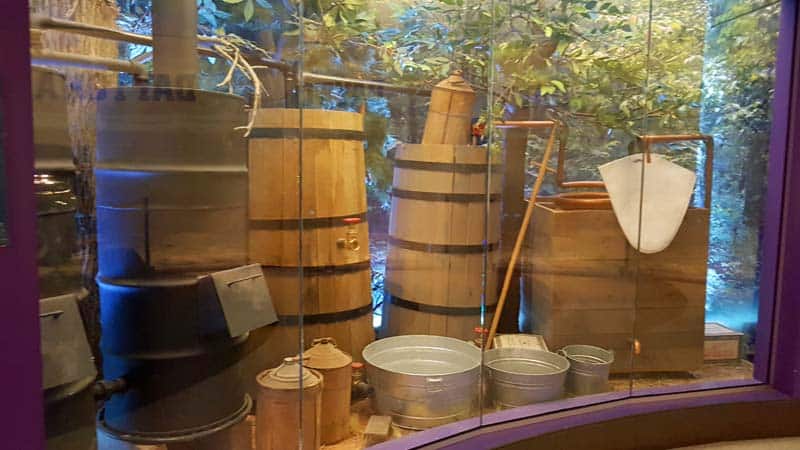 Still built by Junior Johnson at the NASCAR Hall of Fame.

So, it’s no surprise that organized racing was well started by 1933, at the close of the thirteen-year span of Prohibition. Fifteen years later, the first NASCAR-sanctioned race was held on Daytona’s beach course, on Feb. 15, 1948.

Fan Experiences at the NASCAR Hall of Fame

The NASCAR Hall of Fame is a mecca for fans who’d like to experience race day beyond the racetrack. While it records every kind of data about NASCAR racing you could ever want to know, and displays all kinds of memorabilia, the high-tech venue is all about fun.

And for somebody who loves an adrenaline rush as much as I do, it provided an amazing way to spend the morning on my trip to Charlotte, NC. 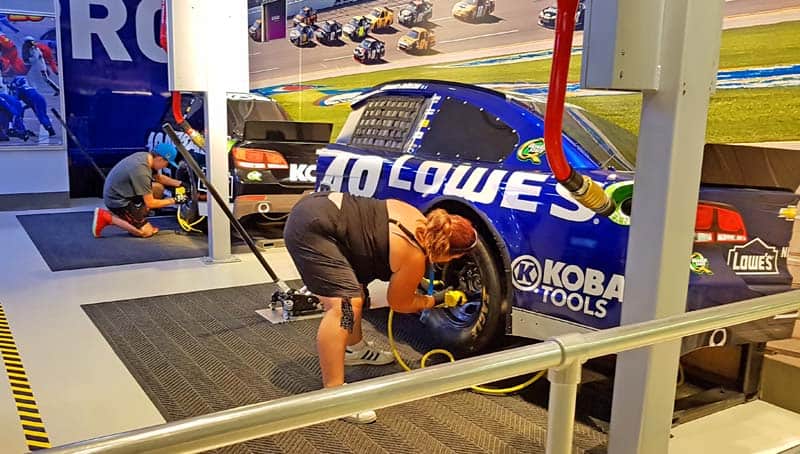 The pit stop challenge at the NASCAR Hall of Fame, where participants see who can change a tire the fastest.

I started with Glory Road and the eighteen race cars lined up along its banked surface that greets you when you enter the Hall. My favorite car? The first one in the line-up, the Hudson, and that iconic mantra of manufacturers in all motorsports industries — win on Sunday and sell on Monday. Indeed, the Hudson Company made performance parts available to the general masses so they could be used on the race cars.

After Glory Road comes the next level (there are four levels) where the interactive fun really begins. The key to your fun is your Hard Card, which you purchase at admission. You’ll find eight different stations to test your skills and NASCAR knowledge, all of which require the card. These include activities like pit lane where you can compete against someone else changing a tire and a challenge to test your knowledge.

I skipped right to the racing, of course, starting with the training center video games. I’ll be the first to admit I had limited access there. All right. No success. I never made it past corner two without either blowing up the car or crashing. I felt sorry for the attendant who had to keep showing me how to reset the system.

So much for practice. I headed over to the simulation for my chance at a win against some other newbies to the world of racing.

Okay, I’m a crappy gamer. On to the real cars.

Compete in the NASCAR Simulated Race! 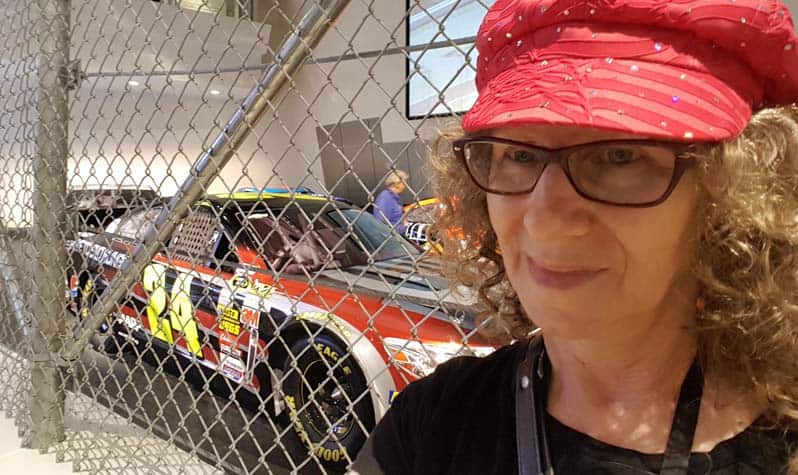 Linda Aksomitis, selfie, of the fan experience driving a car at the NASCAR Hall of Fame

The real cars are a lot different from a video game, in my humble opinion anyway. I selected Car #24 for my chance at being a NASCAR driver. Who else has driven #24? Well, Jeff Gordon leads the way with 25,000+ laps he’s led on the actual track — and 90+ wins.

And the rest of us. Well, we didn’t do so well… since 1950 car #24 has been raced by 64 different drivers. Out of all of those drivers, just one (really!), Jeff Gordon, has managed to be first to the checkered flag!

But if you’re looking for an experience that smacks of the real thing, do give hitting the track at Charlotte a try in the simulator. I can guarantee your heart will be in your throat as you head into that high banked corner on your first lap!

(And nobody will know it took you twice a long to make a lap as the real racers either.)

Visit the NASCAR Hall of Fame

The NASCAR Hall of Fame is owned by the City of Charlotte, licensed by NASCAR and operated by the Charlotte Regional Visitors Authority. It has about 40,000 square feet of exhibit space on a five-acre site. There’s a lot to see, whether your focus is on Heritage Speedway and its individual galleries, which tell the story of NASCAR’s exciting 60-plus year history, or the actual Hall of Honor, with inductee information.

The NASCAR Hall of Fame is open year-round. Admissions vary depending on age and the type of experience you’re looking for. Check current costs at: http://www.nascarhall.com/tickets

If you’re attending one of the season’s racing events at Charlotte Motor Speedway, plan to complete the experience with a visit to the Hall of Fame.

I visited the NASCAR Hall of Fame as part of a post-trip for Travel Media Showcase 2017, hosted by the city of Charlotte, North Carolina.

More Things to Do In North Carolina

Weekend Getaways: 10 Colorful Outdoor Things to Do in Charlotte, NC, This Fall

Check out these 10 things to do on a Charlotte, North Carolina, weekend getaway during its prettiest season – fall! Lots of fall foliage for leaf peepers to enjoy in this great outdoors city.

Take a Raft or Kayak on a Whitewater Center Rafting Adventure

Whether you want to raft or kayak in whitewater, the Whitewater Rafting Center in Charlotte, NC, has it, along with other amazing outdoor adventures.

The photo in the header above was taken at the NASCAR Hall of Fame, in Charlotte, North Carolina (USA). Glory Road, the name of the feature, depicts various banked race tracks. Click here to find all of the cars and tracks depicted. 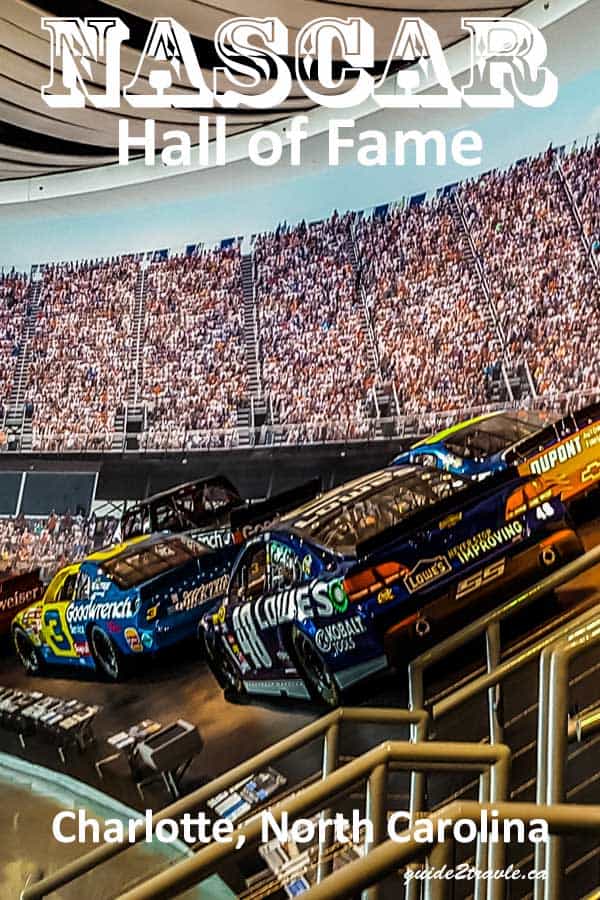 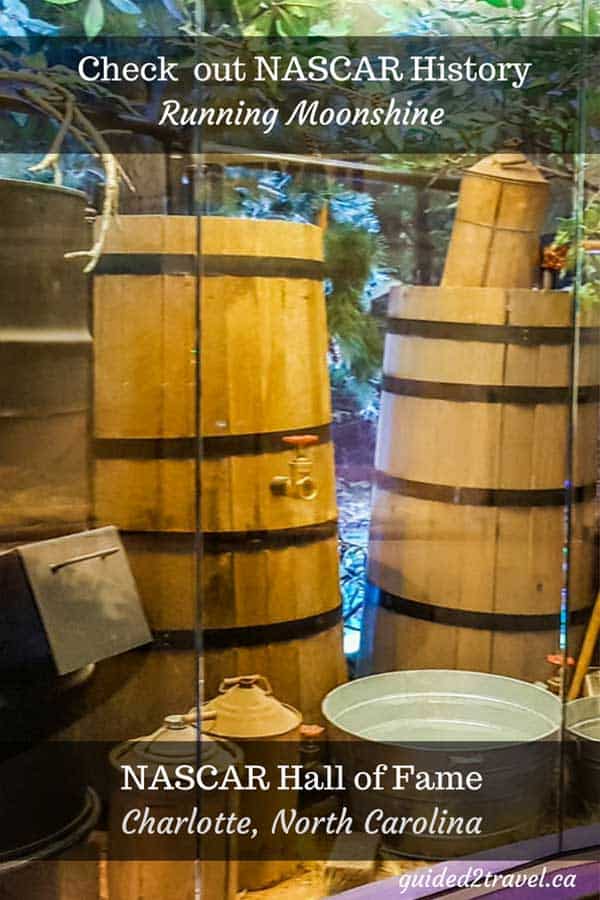 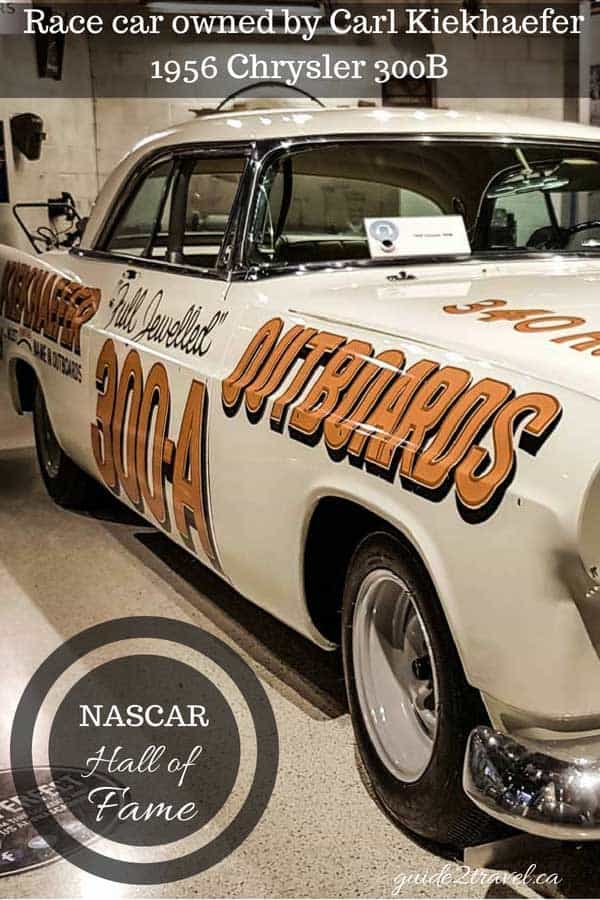