This 1943 Destroyer is docked on the Mississippi River in Baton Rouge, LA
G

The USS Kidd Fletcher class destroyer, launched Feb. 28, 1943, floats on the Mississippi River at Baton Rouge, Louisiana, when the water is high. However, when the water drops, the Kidd settles back on its piles. Sound different? The Guinness Book of Records thought so too and added this Veterans Museum to their lists.

This was just one of the many amazing things we learned from Captain Buck about the Kidd during our visit to the ship museum. With a military career of his own, and a father who had served on a similar ship in WWII, the Captain had amazing stories to share about the only destroyer ship in the world remaining in her World War II appearance. Even the Kidd’s finish, Measure 22, is wartime camouflage paint.

The Pirate of the Pacific 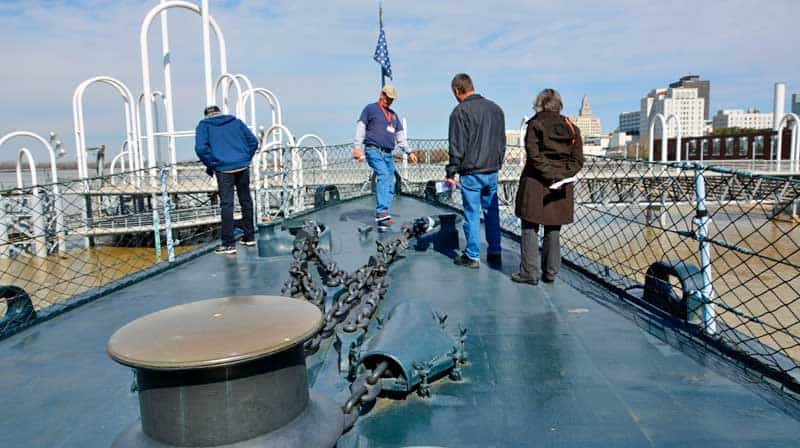 Chain on the deck of the USS Kidd in Baton Rouge, LA.

Few, if any, American destroyers have flown the skull and crossbones of the Jolly Roger from their masts. But the USS Kidd did — on its first voyage across New York Harbor. The incident earned the ship a photo in Time Magazine with the added info that it had been a full century since the Jolly Roger had flown in New York Harbor.

Although the ship adopted the pirate, Captain Kidd, as its mascot, it was actually named for war hero, Admiral Isaac C. Kidd. Admiral Kidd was the first USS officer to die during World War II and the first American admiral ever killed in action. He too, had been linked to the infamous pirate with his nickname, “Cap”, so his widow obtained official clearance for the ship’s mascot. The crew even had a cartoonist paint the pirate’s image on the ship’s forward smokestack.

And the reputation as a “tin can” (nickname for a destroyer) pirate ship grew during the Kidd’s service. While official history indicates the ship was one of the first to have an ice cream machine, Captain Buck shared the story of how the crew had to cut a hole in the ship to actually get it on board. Then, of course, the hole had to be welded up. And ice cream mix wasn’t easy to come by, so they sometimes “ransomed” rescued pilots to keep a steady supply.

Life on Board the USS Kidd 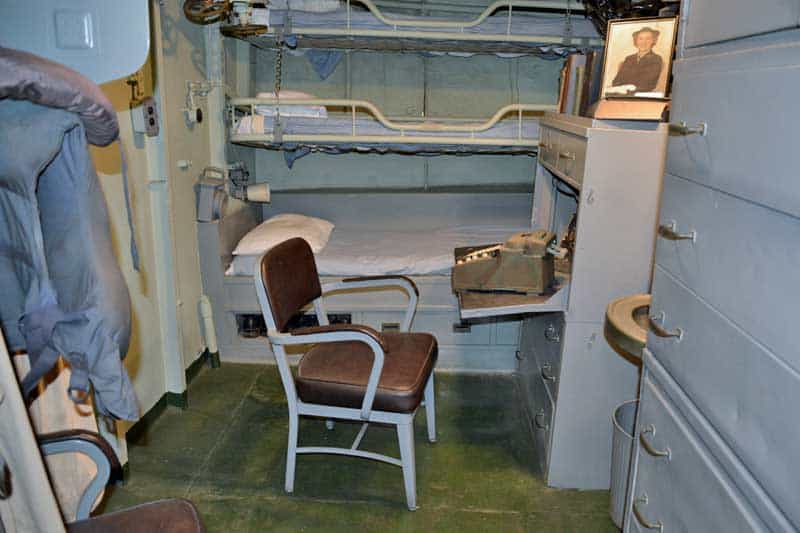 Cabin on the USS Kidd in Baton Rouge, LA.

I couldn’t image what life might have been like rolling over the waves with 330 men living together in a space the size of the USS Kidd. But Captain Buck had lots of tales to tell that made it a living history.

First of all, there’s the water. I know I often forget that while there’s water, water everywhere when you’re on the ocean, it’s not a very usable commodity because it’s full of salt. So, ships have equipment on board to turn salt water into potable water. The Kidd’s water-conversion capacity was 12,000 gallons a day.

That all sounds pretty simple until you think about all the things we need potable water for, such as cooking, drinking, medical and…

In fact, crew members could only take a 45 to 60 second shower. They got wet first with salt water, lathered up with soap, and then rinsed off with fresh water. How that must have stung the skin! 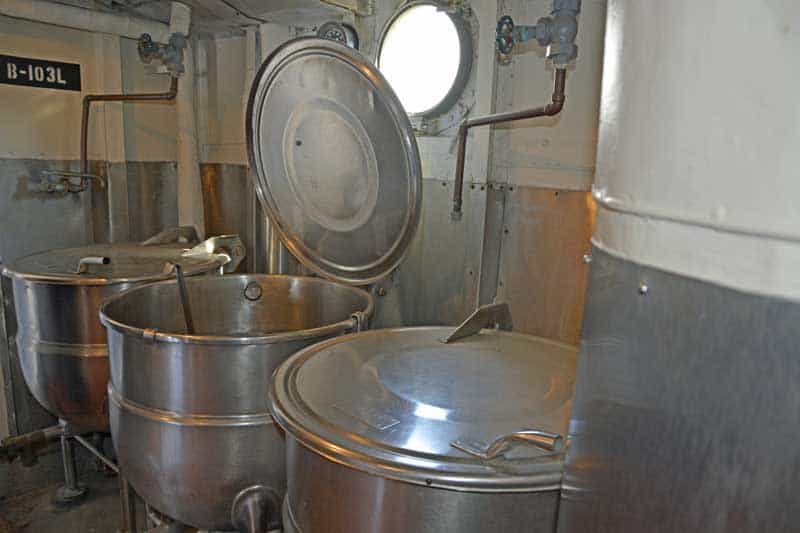 Cooking pots in the galley on the USS Kidd

Of course, nothing about life on board was remotely close to life as we know it as land lovers, or even the cruise ship, or ferry experience. There was just one dining room or mess deck — mess cooks bunked right there — that ran all day, every day.

So crew filled a tray in the galley, scurried down the stairs with an elbow in one tray corner to keep it from tipping and spilling, and quickly devoured whatever had been bubbling in the giant cooking pots. When you think about it, that ice cream must have been a more welcome sight than gold! Although, as Captain Buck told us, really “coffee is [the] gold on a naval ship.”

The USS Kidd at War 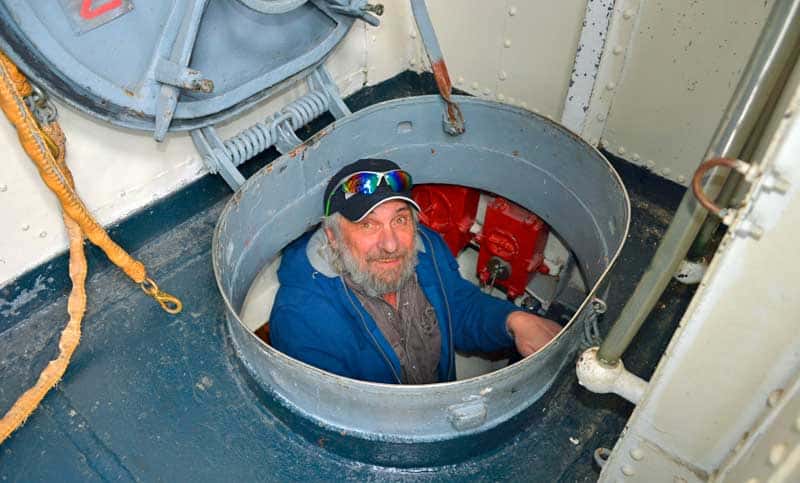 David Aksomitis coming up from the engine room on the USS Kidd in Baton Rouge, LA.

A ship built as a destroyer is smaller, faster, and more easily maneuvered than the larger ships it accompanies. They’re in for the long haul protecting the fleet from things like floating mines, rescuing downed pilots, and fighting off attacks. So, they’re well equipped with all kinds of guns, torpedoes, depth charges, and more for weaponry.

David, and the friends we were with, had hundreds of questions for Captain Buck to answer about the Kidd’s weaponry. Me, I just listened, amazed at how trained the marines firing all those weapons must have been and how well they had to function as a team.

For example, one of the guns shot a 50 pound projectile at targets up to 10 miles away. While it sounds basic enough, that mean a dozen plus marines were involved in getting the projectiles to the gun, loading it, and firing it. 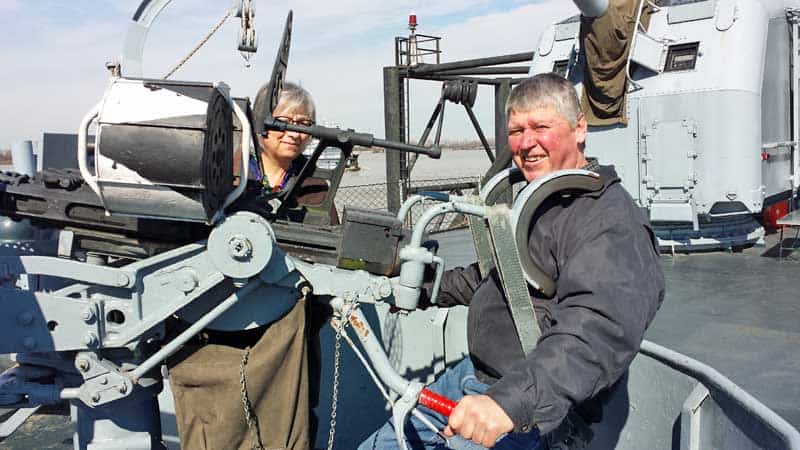 Firing one of the guns on the USS Kidd naval destroyer.

It soon became clear that everything that happens on a warship requires precision and efficiency. Even the 20 mm guns our friends tried out on deck took two people — one to sit on the strap that passed for a seat and fire (350 rounds a minute), and one to change the barrels as they got hot, and throw the brass casings that collected in the “gun bucket” overboard when it filled.

The USS Kidd and the Kamikaze Pilot

The Kidd suffered its most severe damage of WWII on April 11, 1945, ninety miles east of Okinawa.

It was an average kind of day on board the ship. Along with the three other destroyers and combat air patrol, they successfully drove back two raids. Then, in the midst of a dogfight, a Japanese plane dropped down, flying just over the water. It seemed intent on one of the other destroyers. The Kidd’s 20mm and 40mm gunners kept up a steady stream of gunfire, but to no avail.

The plane — flown by a kamikaze suicide pilot — turned direction. It headed right at the Kidd’s forward boiler.

When the plane hit, everyone in the boiler room was killed. The plane’s bomb shot through the ship and out the opposite side, where it detonated. Thirty-eight men died and another fifty-five were wounded.

The USS Kidd retreated and was able to make enough temporary repairs to the gaping hole in its side to return to San Francisco for repairs. Sea worthy again, it headed back to Japan via Pearl Harbor just days after the first atomic bomb and the eventual end of World War II. After being decommissioned in 1946, the Kidd returned to duty again in 1951 during the Korean War.

You can read all of the details of the USS Kidd’s biggest battles on the USS Kidd Veterans Museum website at: http://www.usskidd.com/history.html 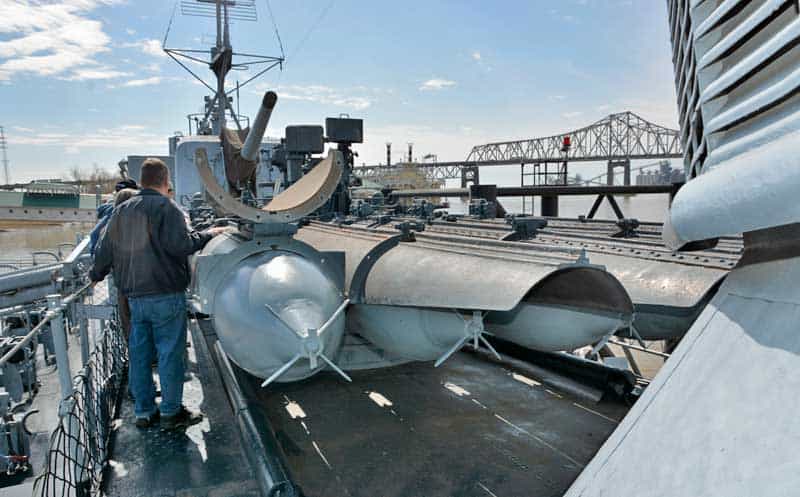 Torpedoes on the USS Kidd.

Various countries around the world celebrate Navy Day to honor their navies and all the marines who have served on ships like the USS Kidd. You can check Navy Day dates on this Wikipedia page.

The first Navy Day in the U.S. was celebrated in 1922 on October 27. It was organized by the Navy League of the United States. However, in 1949, the newly created Department of Defense directed the U.S. Navy’s participation occur on Armed Forces Day in May.

In the 1970s research determined that the real “birthday” of the Continental navy was October 13, 1775. So, the Navy League defined the new date as Navy Day. However, it seems the most widely recognized day to celebrate the Navy is still October 27.

You can celebrate Navy Day whichever date you prefer at the USS Kidd Veterans Museum. Check the Museum’s year-round hours and admission fees on the museum’s information page.

More Things to Do in Louisiana

The Cajun Grand Old Opry with its Cajun music and Zydeco music, in Eunice, Louisiana, is just one of many Cajun cultural experiences you’ll have here.

Visiting Evergreen Plantation, outside New Orleans, is a rare chance to see an almost intact Antebellum era complex with 37 buildings on the National Register of Historic Places.

Louisiana Alligators: In the Wild, at the Farm, and on the Table

Finding alligators in Louisiana in February can be difficult even on a day hitting 60 degrees, the average monthly high. My first visit to this warm winter destination, some fifteen years ago, the only alligator I saw was a foot-long little guy the tour guide had...
Read More

A New Orleans weekend getaway is what you need if you’re tired of winter. From a bayou swamp tour to Bourbon Street and Mardi Gras, fun is a guarantee.

10 Things to Do on a Weekend Getaway in Lake Charles, Louisiana

Check out these 10 top things to do when you take a weekend getaway to Lake Charles, Louisiana – Mardi Gras to nature trail to naval museum.

The photo above is of the USS Kidd, Fletcher-class destroyer, on the Mississippi River, in Baton Rouge, Louisiana (USA). 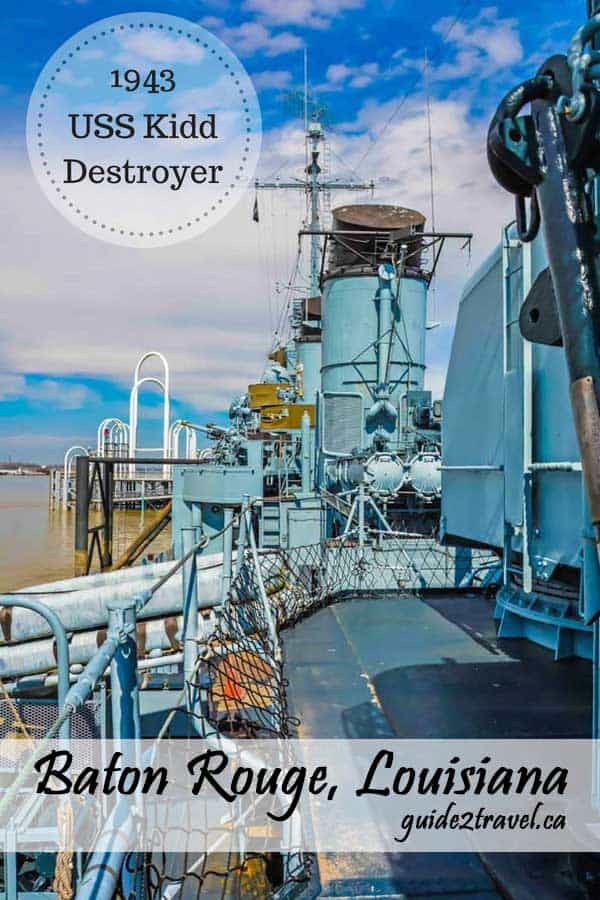 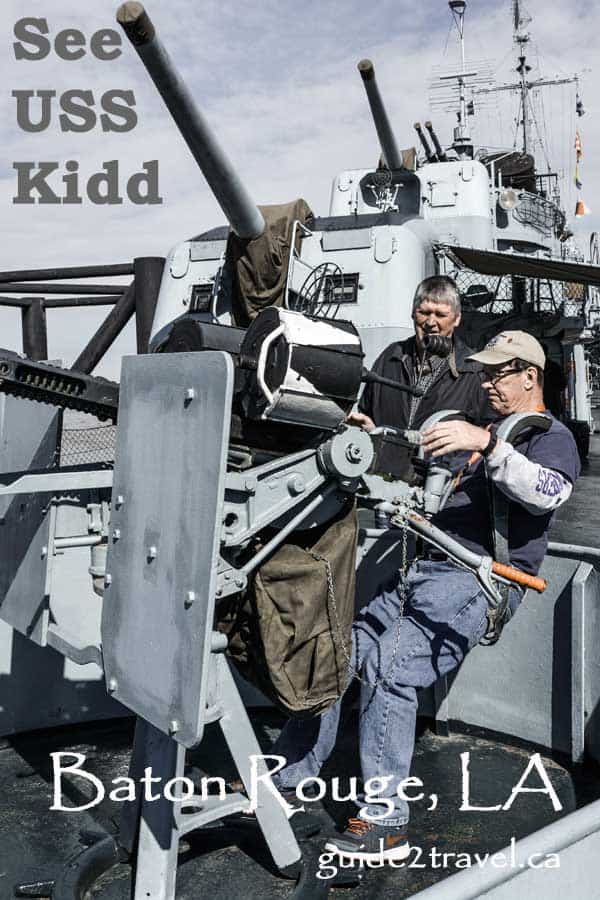