Travel adventures with a twist of history! Latest ArticlesHiking Trails
;

Many serious hikers dream of becoming a thru-hiker on the Appalachian Trail. However, while many start the 2,190 mile hike in Amicalola Falls, Georgia, few make it all the way to the end at Baxter Peak on Katahdin in central Maine.

How Old is the Appalachian Trail? 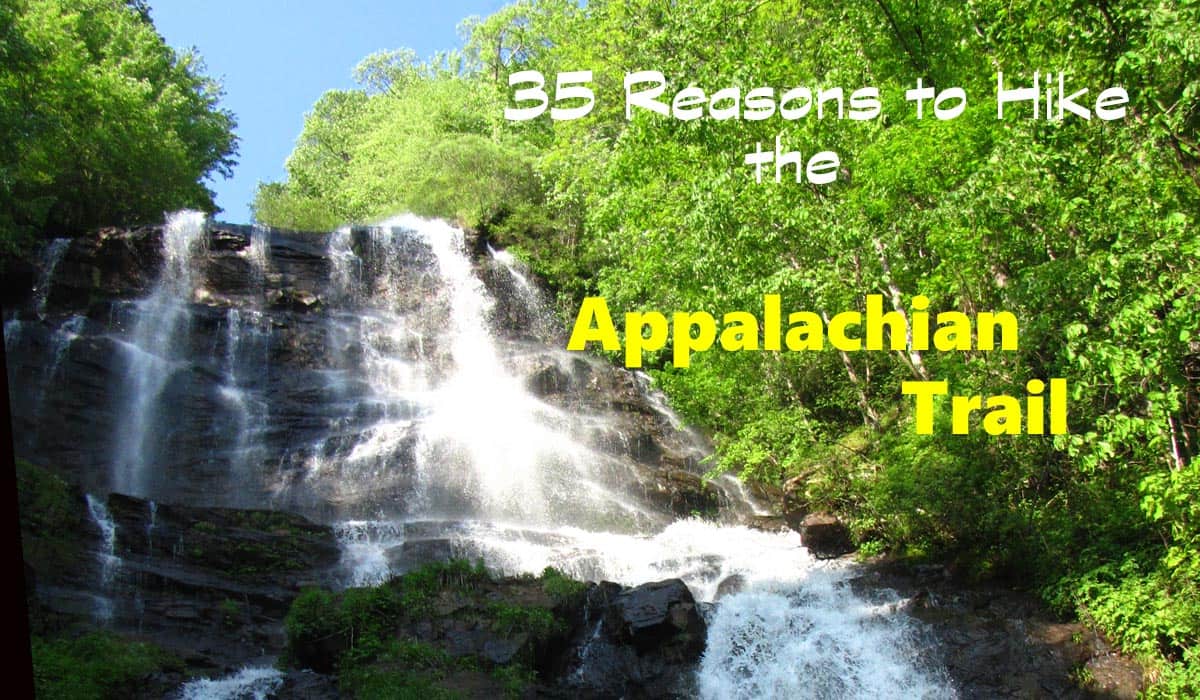 Amicalola Falls – start of the Appalachian Trail in Georgia.

Benton MacKaye came up with the plan for an Appalachian Trail in 1921. Its first section opened quickly in 1923, in the state of New York. However, it took until 1937 to complete the trail and open it to the public.

MacKay announced his proposal for “An Appalachian Trail: A Project in Regional Planning” with it fulfilling three purposes:
The work of raising interest and money started with an Appalachian Trail Conference held in New York in 1922. Despite the potential advantages, the trail had a slow start, and didn’t get rolling until retired Connecticut Judge, Arthur Perkins, of the Appalachian Mountain Club, took over the reins near the end of the decade.

Today’s trail has veered off the original path in a number of places to include even more scenic sections, such as: Grayson Highlands, Virginia; Thundering Falls, Vermont; Roan Mountain, Tennessee; Nuclear Lake, New York; and Saddleback Mountain, Maine, to name just a few.

What States Does the Appalachian Trail Go Through?

Hikers on the Appalachian Trail.

To hike the Appalachian Trail, you’ll need to walk through the Appalachian Mountains in 14 different states. That includes (starting at the usual thru-hike, south to north):

Click here for a complete guide for beginners to hiking the Appalachian Trail throughout all 14 states.

Each of these states has many beautiful parks and National forests. I do, however, have a few favorites from my travels. The beautiful Amicalola Falls in Amicalola State Park top the list. And my fall road trip through the Appalachians in New Jersey stood out as the most colorful on the fall foliage tour we took for our 40th anniversary.

But the Appalachian Trail is about more than the hikers. As you might expect, it takes thousands of agencies and volunteers to maintain all those miles of hiking trails along with the Appalachian Trail Conservancy. You can read the list of 30+ active trail clubs on the National Park Service website. 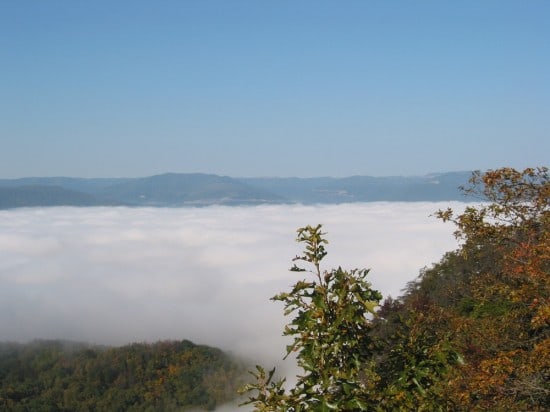 Fall colors and a thick fog show off the Blue Ridge Mountains!

Numerous mountain ranges make up the Appalachians. In northeast Georgia, at Amicalola Falls, I was at the southern end of the Blue Ridge Mountains, which form the eastern front of the Appalachians. Here, their usually narrow ridge widens up to 60 miles in places.

It creates what meteorologists call a wedge or tunnel that often intensifies weather systems as they pass through. Temperatures are cooler in the summer and more rain falls, making the acres and acres of forest a veritable paradise.

It’s these forests of trees that give the Blue Ridge Mountains their famous blue haze. The many varieties of oak trees produce and emit isoprene, creating the atmospheric change.

In the fall, these oaks turn russet and maroon, becoming just one species that makes the leaf season popular! There are also dogwood, sourwood and blackgum that turn deep red, sun-yellow tuliptrees and hickories, orange sassafras and red maples. Sprinkled through this amazing fall color palate there are also Virginia pine, white pine, hemlock, spruce and fir that are evergreens.

Plan to Hike the Appalachian Trail 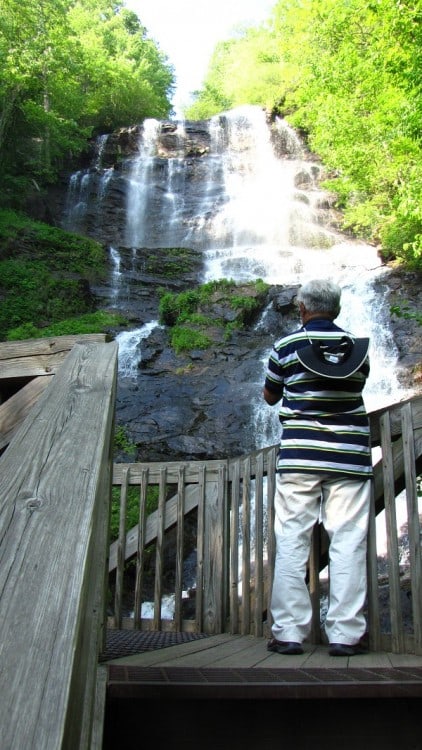 The Appalachian Trail begins at Amicalola Falls in Georgia.

With 2000+ miles to choose from, you have many opportunities to get on the historic Appalachian Trail and enjoy the scenery. This link from the Conservancy provides you with a map of the trail, so you can select the state you’d like to explore.

Each Conservancy state page provides you with details that range from the nice to know to need to know, a map outlining elevations, images, trail clubs, and communities you can visit along the trail.

Get started as I did, in the state of Georgia, at Mile 1, with this link: https://www.appalachiantrail.org/home/explore-the-trail/explore-by-state/Georgia

The Appalachian Mountains still make an impressive footprint across North America, running for 1500 miles from Newfoundland in Canada, to Central Alabama in the United States.

Some geologists believe they once spit out enough lava to make them as high as the Alps, while at the same time raising the greenhouse gas levels to be 20 times higher than they are today. They’ve eroded over the millions of years since then, but still include some of the tallest mountains east of the Mississippi. 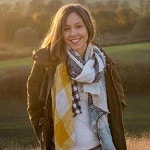 The infographic above was created by Kathryn Wilde, a former internet marketer. She studied PR at the University of Southern California. After graduation, she found a job in a travel agency. But from the very beginning, she knew that spending 8 hours working every day without any activity wasn’t for her.

One day, she got so tired of office work that she decided to become a travel blogger. Click here for her Appalachian Trail 101: The Complete Guide For Beginners.

More Things to Do in Georgia & North Carolina

The NASCAR Hall of Fame high tech exhibits and simulations are a must-do when you take in a NASCAR race at the Charlotte Motor Speedway in Charlotte, NC.

Berry College is one of Rome, Georgia’s, most popular attractions. Enjoy the grounds walking to the historic spots at the Old Mill, Possum Trot Church, and Frost Chapel.

Weekend Getaways: 10 Colorful Outdoor Things to Do in Charlotte, NC, This Fall

Check out these 10 things to do on a Charlotte, North Carolina, weekend getaway during its prettiest season – fall! Lots of fall foliage for leaf peepers to enjoy in this great outdoors city.

Take a Raft or Kayak on a Whitewater Center Rafting Adventure

Whether you want to raft or kayak in whitewater, the Whitewater Rafting Center in Charlotte, NC, has it, along with other amazing outdoor adventures. 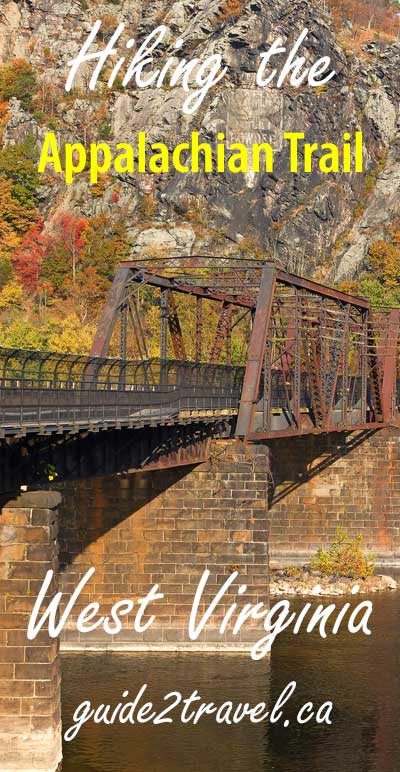 Bridge on the Appalachian Trail where the Potomac River meets the Shenandoah River.