The Frontier Auto Museum in Gillette, WY, truly shines. Indeed, every inch of chrome shimmers like it’s never been touched, while the porcelain signs and gas globes glow like new. It’s easy to tell that this museum is a collector’s lovechild.

We found the museum quite accidentally on a trip to Idaho, then home through the Black Hills of South Dakota, this spring. There might have been a shorter route than going through Gillette, but every once in a while David has to put the pedal down and enjoy those 80 mph Interstate speed limits!

Car Collection at the Frontier Museum 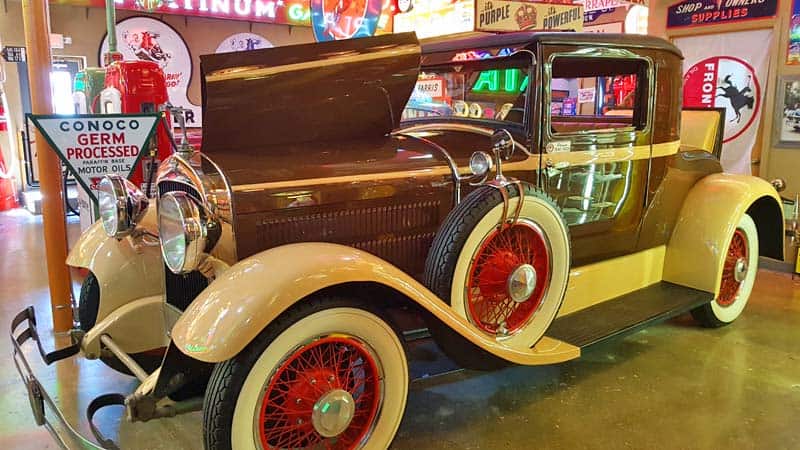 Vintage Hudson at the Frontier Auto Museum in Gillette, Wy.

The museum’s classic cars collection is small, but impressive. The Hudson cars, including the favorite 1949 Hudson convertible in the header photo, belonged to the current owner’s (Jeff Wandler) father, Leon. Today, Jeff runs the museum, along with an antique store in the same building along with his daughter, Briana Brewer and son in-law, BJ Brewer. 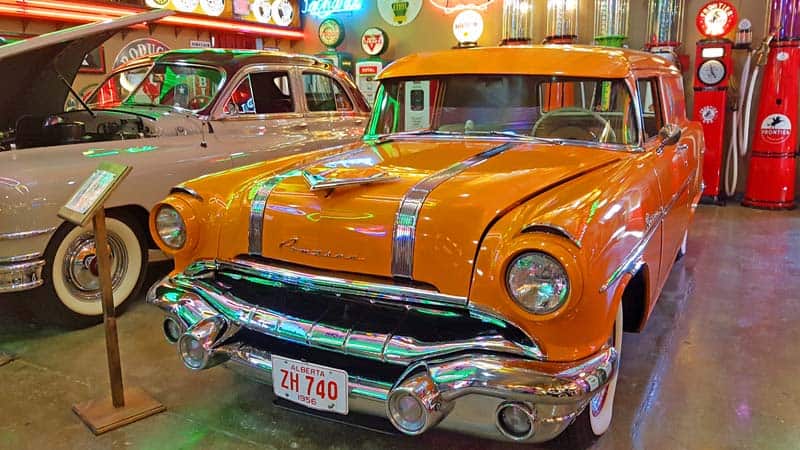 1956 Pontiac classic car at the Frontier Museum in Gillette, WY. 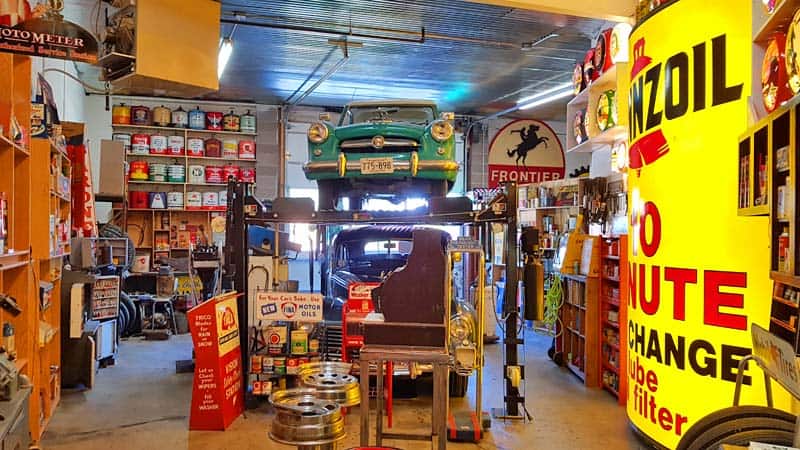 Step back in time with this fully stocked historic garage at the Frontier Auto Museum in Gillette, WY.

While the vintage cars were beautiful, David was even more impressed with the garage. As a kid, he’d spent a lot of time in places exactly like it — although, he was quick to explain, none ever looked quite so clean or well organized!

From the classic cars on the hoist, to the parts in their original packaging, to all of the products on the shelves, this garage was perfect. As baby boomers, we often say a room full of artifacts takes us back in time, but few do it as well as this garage. With all the attention to detail, visitors, whether they’re boomers or millennials, can devote a lot of time to checking out the many pieces. 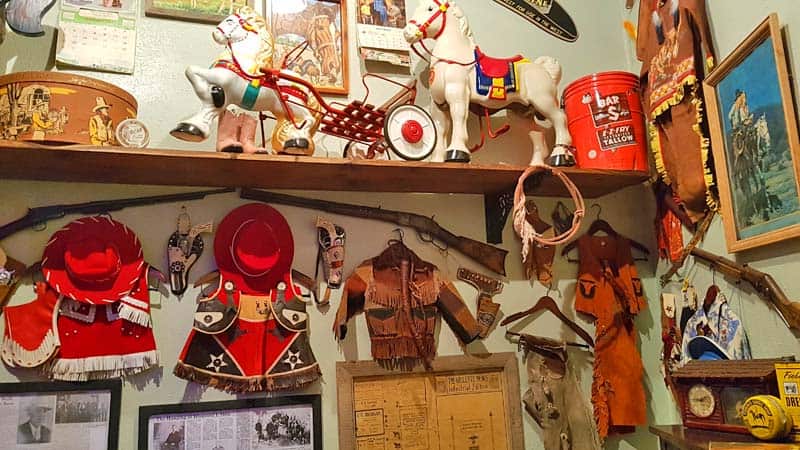 Western toys at the Frontier Auto Museum in Gillette, Wyoming.

Wyoming is, of course, a state in the U.S. West. So, it was no surprise that the toy collection was mainly Western. However, David was pleased to find many of the things he remembered well from childhood, from the fringed cowboy vests to the guns and holsters.

And while I never played with dolls, preferring books and cooking, I certainly recognized many of them! 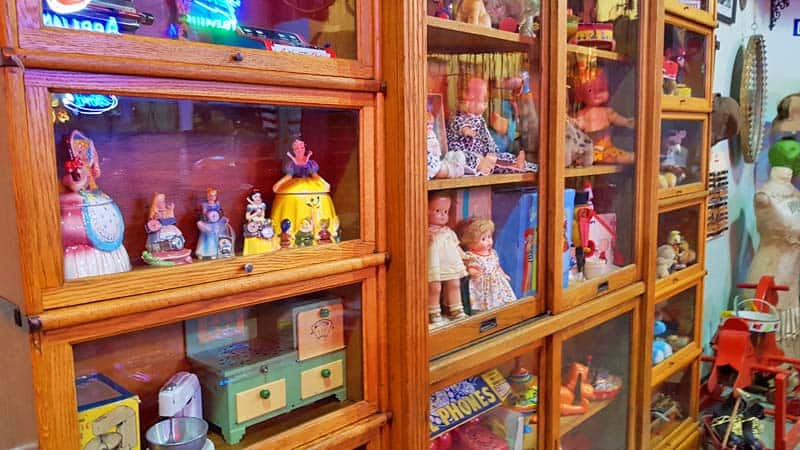 Dolls at the Frontier Auto Museum in Gillette, WY. 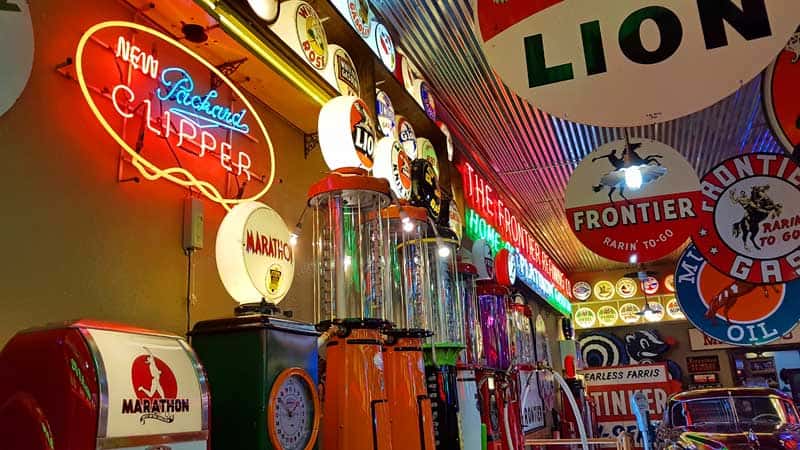 Petroleum Collectibles at the Frontier Auto Museum in Gillette, WY.

My favorite part of the museum though, was without a doubt, the petroleum collectibles. I had no idea there were so many different types of gas pumps! And the signs — well, they’re nothing short of art as far as I’m concerned.

I could have stood and gazed at the walls and ceiling for hours.

This really is just a glimpse at what you’ll find inside the museum. Admission is next-to-nothing (just $5 a person when we visited). And if you’re into antiques, there’s a great collection in the front part.

The museum and antique shop opened in January, 2016, so it’s very much a growing operation. As it turns out, the building is also historical, having been originally built in 1949 for the Ford Dealership.

Check out the museum’s website with opening hours and admission rates at: http://www.frontierautomuseum.com/

Here’s a Google Map that takes you through the stops we made on this part of our road trip. You may also want to read our post on the Frontier Prison (see the map below).

The photo above was taken at the Frontier Auto Museum, in Gillette, WY (USA). 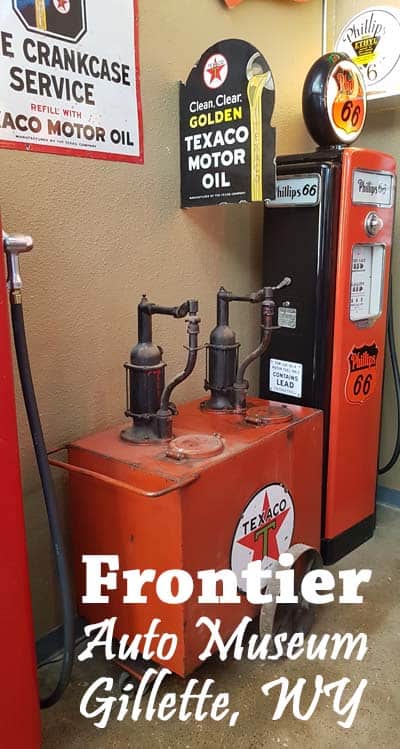 Garage artifacts from the 1960s.

The Range Riders Museum in Miles City, Montana, was started in 1939. Started by 5 local ranchers, it preserves Western artifacts and stories.

There are lots of places to visit in Valletta, Malta, for history lovers. Its National Museum of War covers from the Bronze Age to WWII.

Historic and Cultural Places to Visit in Abu Dhabi

A visit to Abu Dhabi, the UAE’s capital city, has many amazing opportunities. Here are 10 historic and cultural places you shouldn’t miss.

Thinking about visiting Berlin, Germany? Check out the Museum Island and Gallery Walk, then plan an evening in the hip neighborhood, Kreuzberg.

Fagen Fighters WWII Museum in Granite Falls, Minnesota, is a must-see attraction on a Minnesota road trip. Its displays are both authentic and impressive.

Visit the only Bonanza farm National Historic Landmark – Bagg Bonanza Farm – in Mooreton, ND. Then check out the Bonanzaville Museum in Fargo, ND.

Top Reasons Why You Should Fly to Toronto This Year

Toronto, Canada’s largest city, is a cosmopolitan travel destination that’s one of the most multicultural cities in the world and offers lots of things to see and do.