The Carcross Desert in the Yukon
;

Deserts aren’t always large, moving piles of sand — and, contrary to common misconceptions, they aren’t even always roasting hot! Around the world, deserts cover up to 1/8 of the land and are found on every continent. They can be hot (the Sahara reaches up to 122 degrees F or 50 Celsius) or cold (McMurdo Dry Valleys, Antarctica, has an average temperature of -20C or -4F). Big (the Sahara is the largest hot desert) or small (the Atacama in Chile).

While in North America we’re all familiar with the deserts in the Southern United States, what most people don’t know is that Canada also has a desert — or rather what many consider a desert — that’s even smaller than the Atacama Desert. This tiny desert is outside Carcross, Yukon, and covers a mere 260 hectares, or 642 acres. 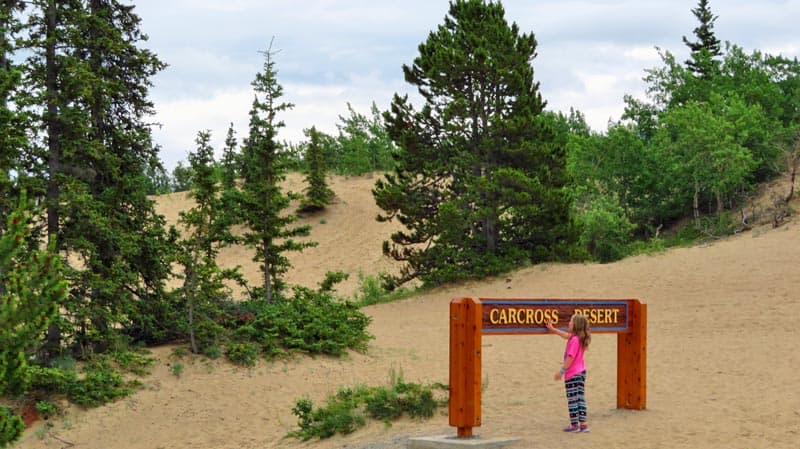 We visited Carcross on our giant loop road trip for the 75th Anniversary of the Alaska Highway. We’d already driven the Alaska Highway from Whitehorse, Yukon, to Alaska, several years earlier, so headed south from Whitehorse on the Klondike Highway to Skagway, to take the Alaska Marine Highway to Juneau, then on to Prince Rupert. Leaving the ferry after our final 30 hour boat ride, we followed the Yellowhead Highway back home to Saskatchewan.

But back to the Klondike Highway, where a desert was the last thing we’d expected to see!

When we came to the rolling dunes, we pulled off the highway to explore. Dozens of others were already hiking through the shifting sands of what was once the bottom of a large glacial lake — locals enjoy it year round for hiking, biking, and even snowmobiling. 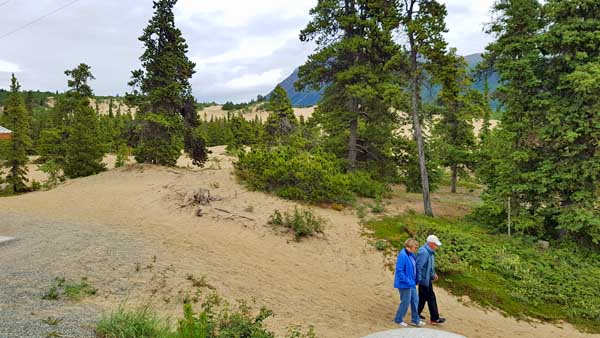 Visitors hiking at Carcross Desert in the Yukon

It was a chilly day in the shadow of the ominously dark mountains, so I wasn’t tempted to slip off my shoes to feel the sand of Carcross Desert between my toes. However, if I had, I wouldn’t have had to worry about the usual prickly cactus. Indeed, there isn’t any of this common desert plant at Carcross.

Instead, purple flowered Yukon lupine pop up here and there on the slopes. Baikal sedge, another rare plant found in the Yukon, also thrives here far away from its native Asian home. Some suggest the plants came with the migrations across Beringia, as much as 35,000 years ago.

The main vegetation though, in this place of ever-shifting sands, are lodgepole pine trees. You may already be familiar with the prickly needles of this evergreen conifer tree as it’s found in all kinds of settings. Here at Carcross, it thrives in the dry sandy soils. However, it’s also found in various boggy, moist places.

And if you’ve ever wondered why this tree is called a lodgepole pine, it’s because it was commonly used as the poles for tipi shelters of the first North Americans. Over the centuries, it has also had various other uses, such as a medicine for sore muscles and body pain. People even chewed the bark for a sore throat! 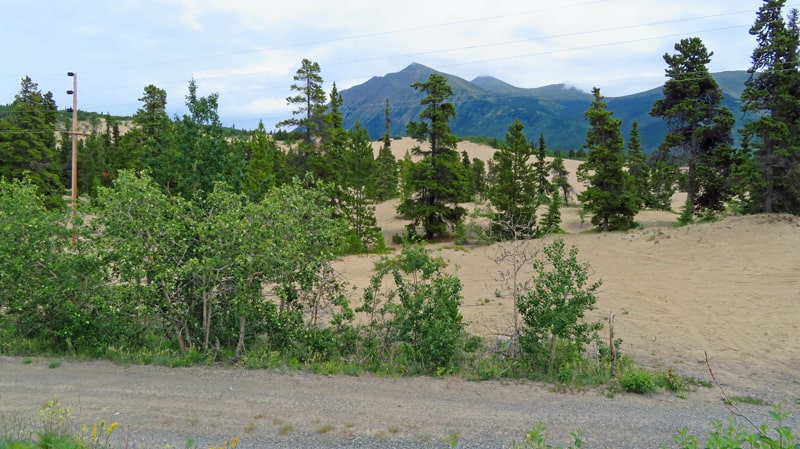 When I first looked up the Carcross Desert on the Web, I found many sites indicating it was the world’s smallest desert. Most claimed the Guinness Book of Records had even acknowledged the fact. However, when I checked out the actual Guinness Book of Records online, they named the Atacama as the smallest desert. Just to be sure, I checked the article date, and found that their website indicates that all online content is up-to-date, meaning the Atacama record stands.

So, sadly, the Carcross Desert is the world’s smallest desert in local lore only, since it’s actually a series of sand dunes.

Getting to the Carcross Desert

You can visit the Carcross Desert on the Klondike Highway. While you’re in Carcross, be sure to check out the historical little village and its visitor center.

The photo in the header above was taken at the Carcross Desert in Carcross, Yukon, Canada, on the Klondike Highway. 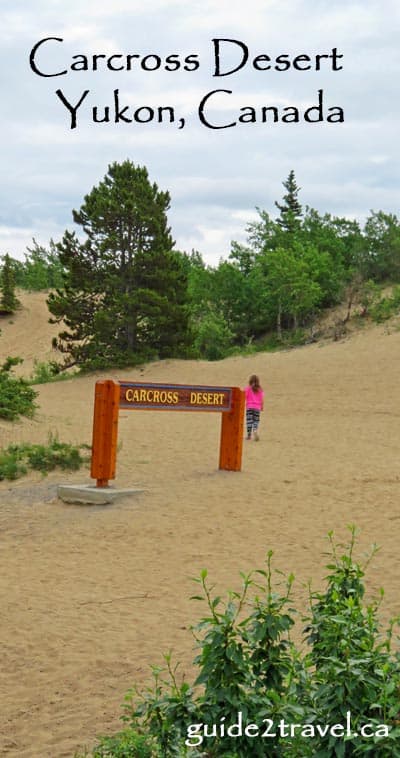