A Century of Military Vehicles

Military vehicles are popular with those interested in machinery of the past — and no collection is more interesting than the Arsenalen Tank Museum outside Stockholm, Sweden. Arsenalen’s collection includes over 350 military vehicles, with about 75 on display in the museum at any given time. Of these, many are rare, one-of-a-kind machines.

Once we found out about the Arsenalen museum of military vehicles from another traveler, it rose to the top of our must-see list when doing our tour of World War II historical places throughout Europe. After visiting, it made the list as one of our favorite stops.

Here’s a very small sampling of the museum’s military history and vehicles, all of which are owned by the Swedish Government. 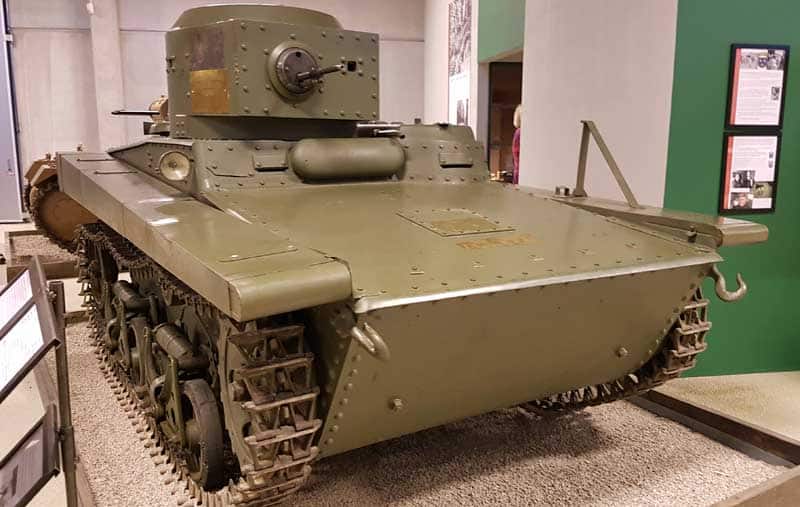 T-37 Tank at the Arsenalen Military Museum outside Stockholm, Sweden.

About 1200 models of this Soviet Light Amphibious tank T37 military vehicle were manufactured in Russia between 1933 and 1936. Its design comes from the British amphibious Vickers-Cardon-Lloyd. This particular tank is one of only two remaining in the world.

Each tank artifact in the museum has a description, along with a history. This one was captured by Finnish soldiers in 1939 at the Salla front and gifted to Swedish volunteers in Finland in 1940. It was painted white at that time, but has since been repainted. The flotation devices on its sides were still in place in the 1940s, but were replaced with copies during a 1970s restoration. 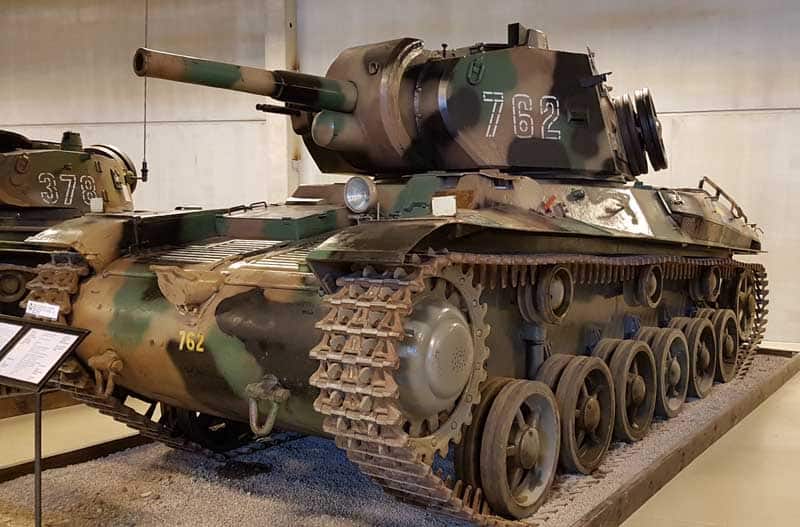 This type of tank was manufactured from 1943 to 1945, and was the heaviest tank used in Sweden during World War II. It carried four men and could travel at 25 mph (42 kph).

The photo above is of a 1960s IKV91 infantry support vehicle. It has a traditional rotating turret armed with a 9 cm low pressure gun. It was used for direct support to the rifle companies. 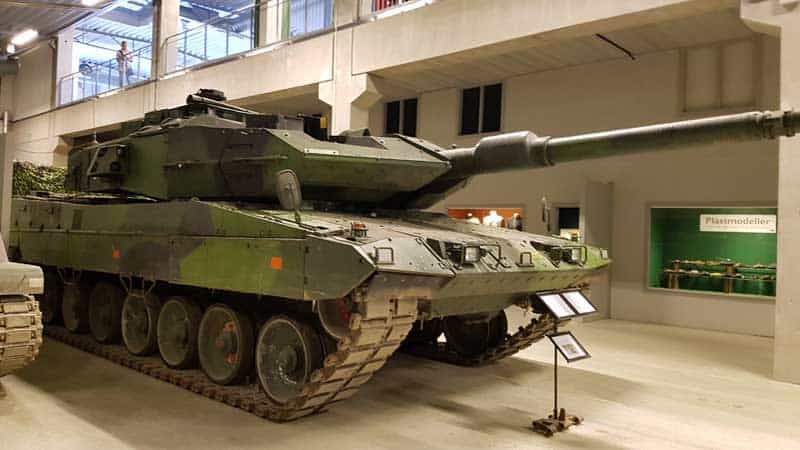 Sweden tested a number of different tanks before making the decision in 1994 to purchase 120 EA Leopard 2S (Swedish design Strv 122) tanks, which were a development of the Leopard 2 A5. The most significant difference between these tanks and the Strv 121 is the shape of the turret. This tank also has a more advanced fire control system and better level of protection, which increased the tank’s weight by 7.5 tonnes.

Other Military Vehicles at Arsenalen

As well as tanks, the museum has a variety of other military vehicles. Here are some of our favorites! 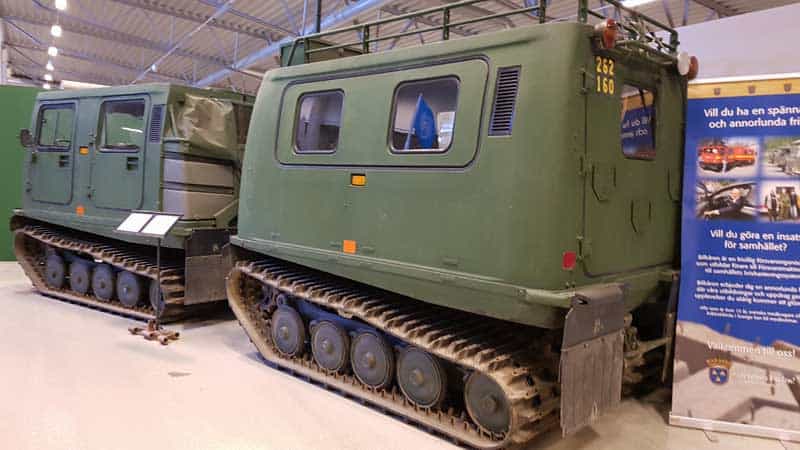 The Bv 206 military vehicle from the 1980s had a forward (carried the driver and 5 passengers) and rear carrier (11 passengers). It’s described as one of the world’s best at moving through snow with its articulated steering and drives on both carriers. 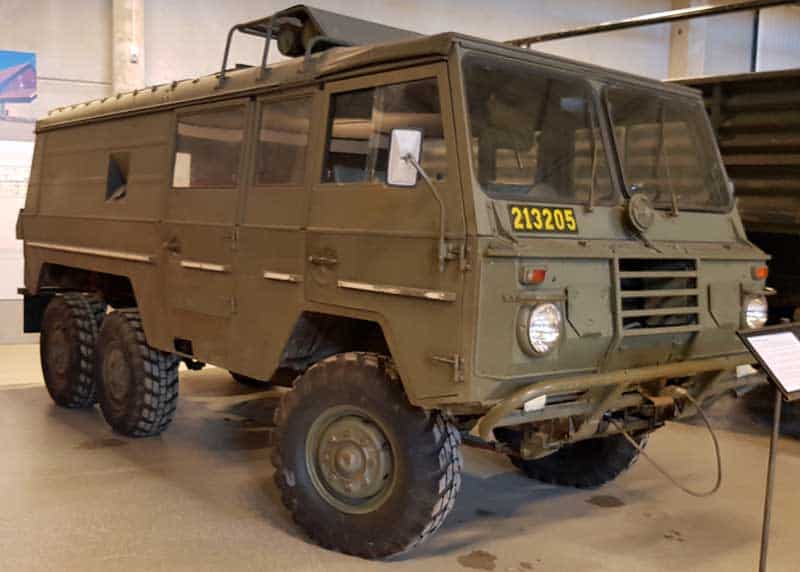 Tgb 12 at the Arsenalen tank museum.

The TGB 12 all-wheel drive military vehicle is one of five prototypes produced and used in reconnaisance platoon trials in Stragnas. While it proved too expensive for series production, three of the original five produced have survived. This model featured a body entirely sealed off, with exhaust and intake at its top. The top was canvas covered instead of metal, to make it easy to evacuate. 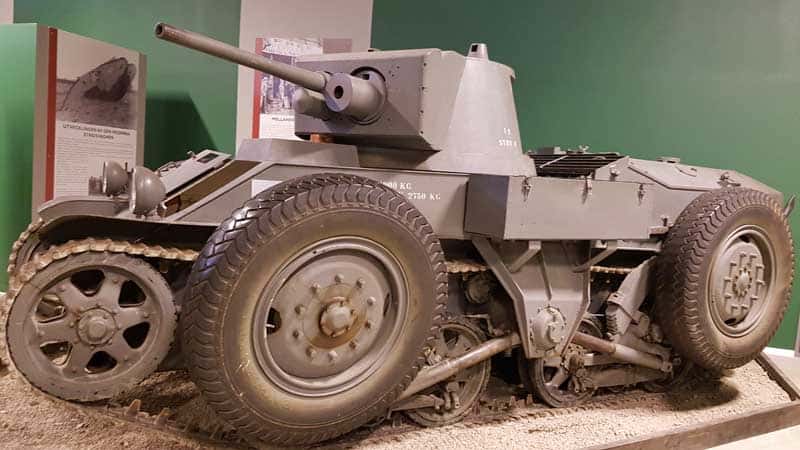 This armoured car is another rare piece at the Arsenalen tank museum. Its design made it so expensive for a military vehicle that this is the only one ever made, plus after a few years use the military realized it was too large and heavy for normal usage. It was built in 1932 in the Oskarshamn shipyard and delivered to cavalry regiment K 1 in Stockholm.

Whether you’re interested in the history of World War II, as we are, or just enjoy learning about the machinery of the past, this military museum is a must-see if you’re in Stockholm.

The museum is located 7 km from Strängnäs, along the motorway E20. We found it easily using the rental car’s GPS. After touring the museum, we went on to the lovely little seaside town of Stragnas.

Related Articles About Things to Do in Sweden

The photo in the header above was taken by Linda Aksomitis at the Arsenalen Military Museum outside Stockholm, Sweden, Europe. It’s an fm/29 armoured car built in 1932, and was so expensive that only one unit was built. 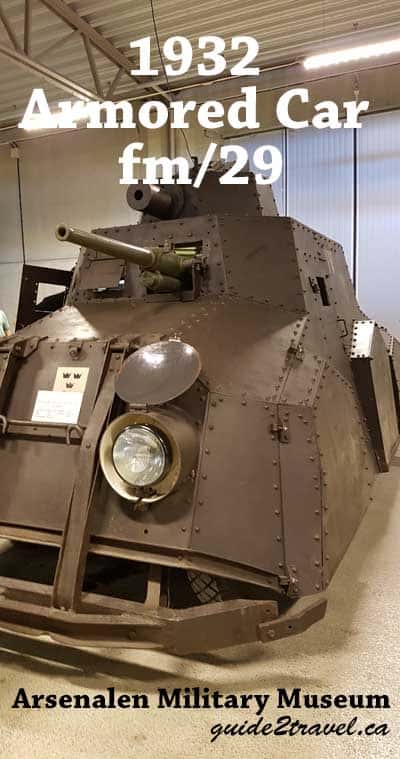 1932 Armoured car at the Arsenalen Military Museum in Sweden.