Driving an armored tank may not be something that pops into your mind when you think of travel adventures with a twist of history, but it’s definitely worth investigating. Armored tanks first appeared during WWI as all-terrain fighting vehicles. Now, in the 21st century, they’re still the backbone of land operations in armed conflicts. In the century between then and now, there’ve been a lot of different models of tanks produced around the world.

And the perfect place to see how they work up-close is in the Texas Hill Country at DriveTanks.com. We started our adventure by flying in to Houston. Indeed, Houston, Texas, is home to numerous landmarks and exciting activities that can ensure you have an incredible experience.

The Start of Our Texas Adventure 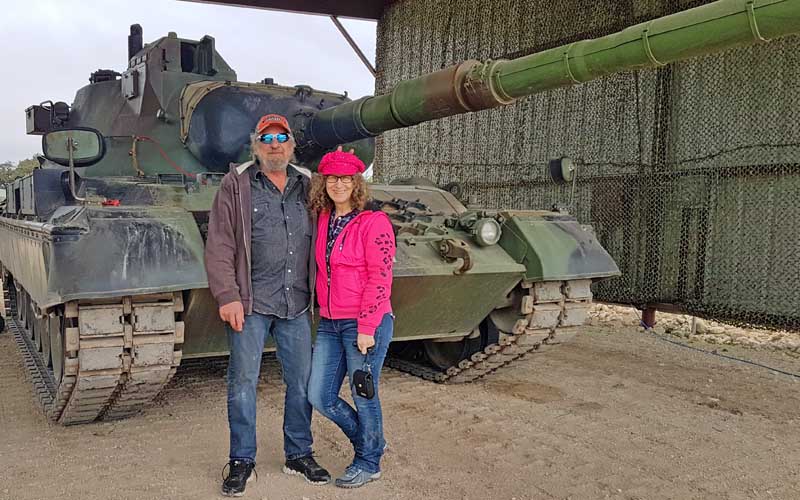 Linda Aksomitis and David Aksomitis at DriveTanks.com in Uvalde, Texas.

All great adventures, according to David anyway, begin on a Saturday night with beers or whatever beverage takes your fancy. And that’s exactly how this one started.

Generally, we like winter and hitting the snowmobile trails. But a winter without snow — and well below normal temperatures — well, it’s not nearly as exciting. So, while moaning about the sad state of fun opportunities in Saskatchewan, four us (David and I, and our friends, Dave and Penny) decided to head south to the Gulf Coast for a couple of weeks.

Fast forward a few days, past discovering that flights were $100 to $300 cheaper per person to fly into Houston than any of the other Gulf Coast cities, and we were planning an itinerary beginning in Texas. I love the Gulf and have visited many times, but Dave and Penny were newbies. So, when it came to planning activities I was open to any and all new ideas.

I wasn’t surprised at Dave’s suggestion to check out deep sea fishing, but when he mentioned driving armored tanks, I had no idea if or what was available. All of us had already been to Sweden’s biggest tank museum a few summers before, and like Dave, I had wondered what it would be like to drive one. So, off to the Internet we went and discovered the Ox Ranch, with its additional DriveTanks.com attraction for visitors. And the planning began.

We landed in Houston, Texas, and hit the highway with our rental that Thursday evening. The private road, near Ulvalde, Texas, where Ox Ranch is located was about 350 miles away, so our Friday reservation was for 1 p.m. 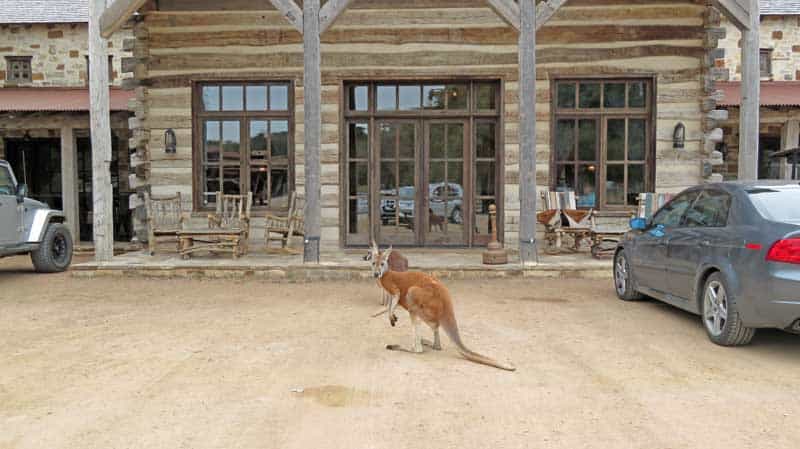 Ox Ranch outside Ulvalde, Texas, has over 60 species of exotic animals.

And if you’re wondering what a place named Ox Ranch could possibly have to do with driving tanks, well, here’s the story.

Ox Ranch has a long history, complete with everything from the tracks of a T-Rex dinosaur embedded into the river to a pile of bat guana (poop in other words!) believed to have been used by the Confederacy to make gunpowder. Now that’s history!

Jump ahead to 2012, and the over 18,000 acres of Texas Hill Country became Ox Ranch under current owner, Brent Oxley, the college dropout who started Hostgator.com, sold it for 225 million and changed careers to establish one of the most unique businesses in Texas. And who better to help him than CEO, Todd DeGidio, a former Green Beret, along with his team of experts. 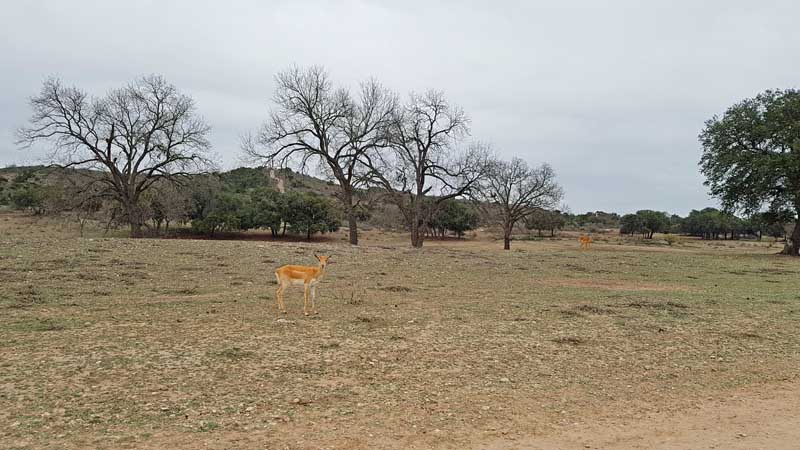 Once we’d navigated through entering our security codes into the gates at Ox Ranch, the full impact of what Oxley is building grazed right in front of us. With the largest herds of Axis deer, Blackbuck, and Scimitar Horned Oryx in Texas, the ranch also raises over 60+ species, many of them exotic. What a place to take a photo safari!

David and I have been visiting various World War II sites and museums a lot over the past couple of years, since David retired and joined me in my travel writing pursuits. Since I also write historical fiction, it’s been amazing to have such incredible research to draw from for my settings. 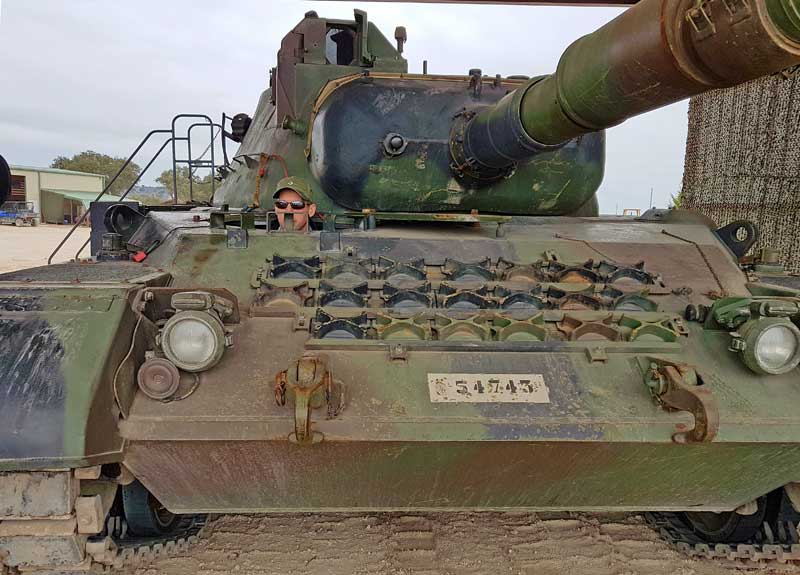 Dave, our friend, driving the Leopard tank at DriveTanks.com.

The tank we drove was one of the newer, more agile ones used by DriveTanks.com — a West German Leopard 1AR Main Battle Tank, rather than a WWII tank. The Leopards entered service as military vehicles in 1965. That was the Cold War era, and the Leopard became the standard in European forces as well as being adopted by various military around the world.

No matter what period it was from, it looked pretty intimidating to me as we stared at it, idling away, coughing out puffs of diesel while the engine warmed up.

We’d decided in advance that Dave, our friend, would do the driving. After all, finding tanks had been his idea. Penny and I planned to ride inside, sticking our heads up like gophers on a prairie trail, to see what was going on. David, on the other hand, rode on the back of the tank with a strap around his waist to hold him on. Of course, that wouldn’t have happened in a military operation! 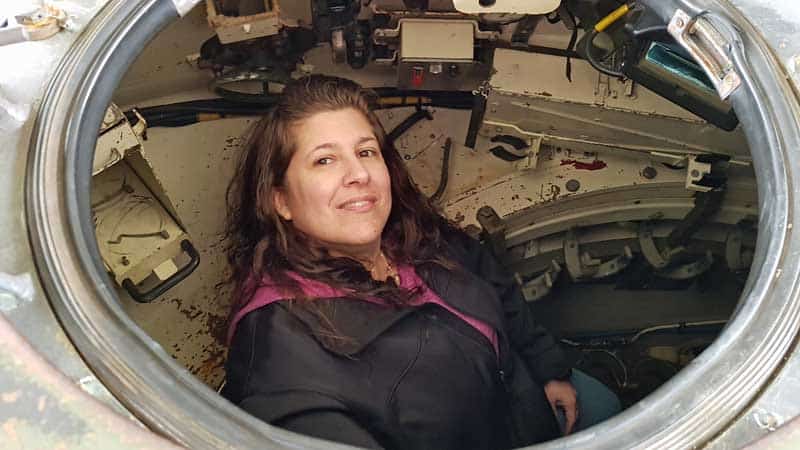 Our friend, Penny, in the cupola hatch on the Leopard tank at DriveTanks.com

Luckily, DriveTanks.com has a stand built to make it easy to climb onto the tank. After that, though, it’s scrambling over the tank the same way that the military do. I ended up on the right side of the tank. Our guide, Glenn, advised me to drop down gently as a fall into the tank wouldn’t be pretty. I could see why once I got inside, as I had the gunner’s seat in front of me, taking up what little spare space might exist. I lowered myself the rest of the way, checking out the small square glass box that would provide my eyes on the world if I rode inside.

I shivered. While yes, it was a bit chilly at 55 degrees outside, my goose bumps were more from thinking about bumping along at up to 40 mph inside the rattling tank. Or, more challenging yet, imagining myself in the gunner’s seat and firing — or hoping the tank’s armour would really withstand shell fire to its outside.

Riding the Tank Course at DriveTanks.com 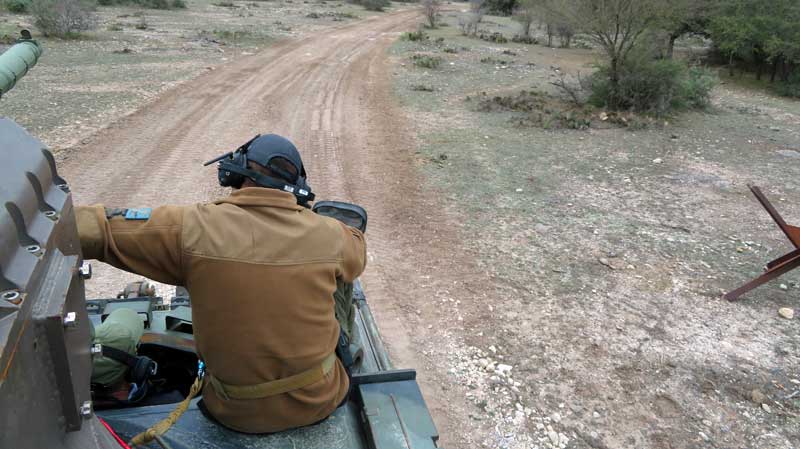 Riding in a tank at DriveTanks.com at Ulvalde, Texas. Photo taken by Linda standing inside the hatch.

By the time I checked out the interior of the tank, it was time to roll. We’d been instructed to stand up on our seats, in order to enjoy the fresh air experience of our ride. Which, I must admit, was a lot nicer than the diesel infused air inside the tank.

Dave started out slowly around the course, with the tank jerking like it had the hiccups! It was easy to see keeping foot pressure steady was a challenge. (Check out the video below from The Texas Bucket List below)

The Texas Bucket List from Todd DeGidio on Vimeo.

We covered those first few hundred feet quickly, heading for an almost straight drop. Yikes! I braced my feet on the unforgiving padding of the seat below me, gripped the hatch’s cold metal in my hands, and did what anybody would, screamed!

It was like the drop of a roller coaster, but rough as a tractor jiggling over a frozen rutted slough bottom.

Then, we drove along the rocky bed of the nearly-dried up river, up the riverbank, through the trees…I could have been anywhere, anytime in the past century.

When we stopped, Dave’s grin spread from one ear to the next. Driving a tank had definitely been the perfect first attraction in Texas for him as well as the rest of us. 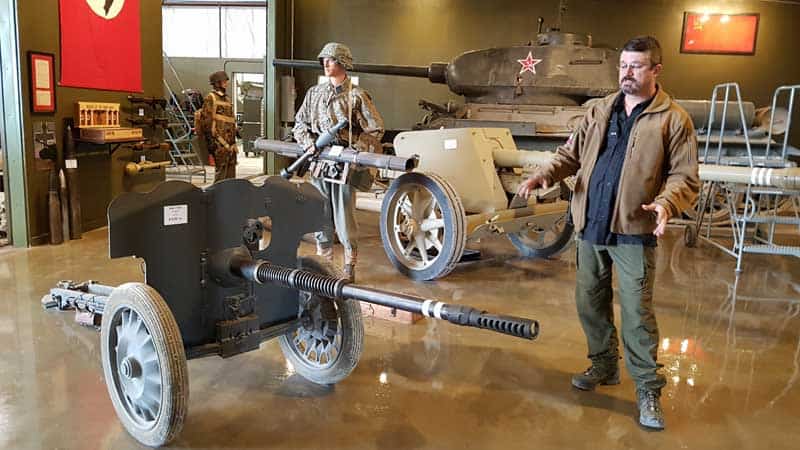 DriveTanks.com has a number of different military vehicles including tanks, which visitors can drive.

After our drive on the Leopard tank, it was time to check out some of the other tanks and the tankbarn. My favorite was the mighty Sherman tank. This one fit in more closely with our WWII interests, as it was the tank most widely used by the U.S. and allies during the war.

We also had the opportunity to explore all of the military vehicles in the Tank Barn. Glenn gave us the guided tour, telling us about the individual history of each piece of equipment.

Part of the challenge, I learned later, talking to CEO, Todd, was finding repairs to keep the tanks mobile. While some can be machined, sometimes you just need an original part. They come, according to Todd, from countries all over the world.

We’d like to thank DriveTanks.com for hosting our tank driving experience. Although our visit was provided free-of-charge, we retain full editorial control over our articles.

Check Out More Things to Do on the Gulf Coast

Why is San Antonio the Most Romantic Weekend Getaway in the US?

Looking for a romantic weekend getaway? From canal boat rides to one of the best wine regions in the country, San Antonio, Texas, is a perfect destination.

North Alabama is just a hop-skip-and-jump away from well-known  vacation destinations like Atlanta,  Nashville, Chattanooga, and more, but it offers a treasure-trove of unique out-of-the ordinary attractions and things to do that you won't fine anywhere else. My last...
Read More

A New Orleans weekend getaway is what you need if you’re tired of winter. From a bayou swamp tour to Bourbon Street and Mardi Gras, fun is a guarantee.

March is one of those winter months that can seem longer than 31 days...but in Huntsville, Alabama, it's easy to get some "spring" in your step with a visit to the Huntsville Botanical Garden. Why March? Well, the garden celebrates Huntsville Blooms from March 15,...
Read More

There are lots of things to do in Mobile, Alabama, for a weekend or a day! This coastal city is home to Battleship Park with the USS Alabama, the USS Drum, and more, 6000 historic properties, a replica of Fort Condé, all sorts of water fun, and more!

The photo in the header above shows three of the historic military tanks that visitors can drive during their ultimate adventure experience at DriveTanks.com near Uvalde, Texas, United States. The photo was taken by Linda Aksomitis on a visit to DriveTanks / Ox Ranch in Uvalde. 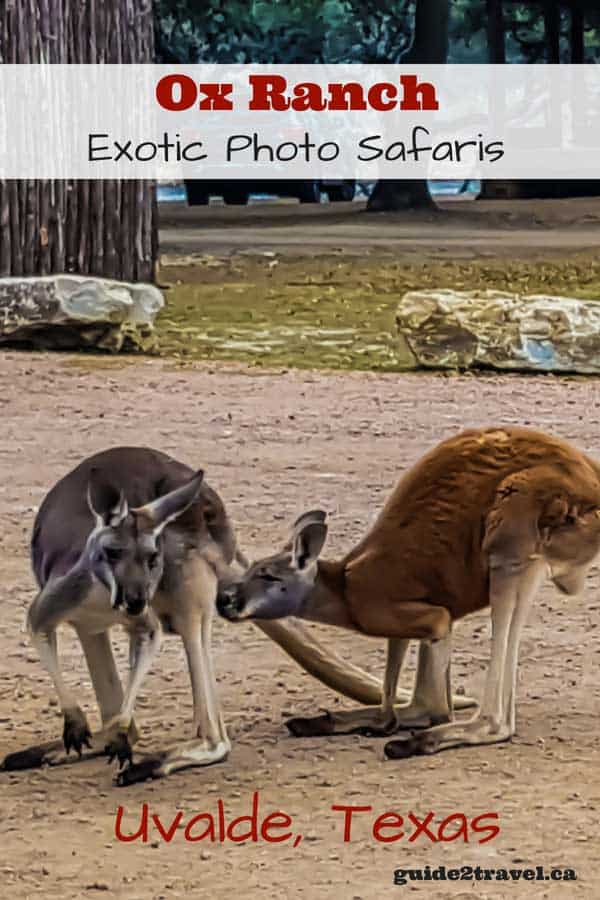 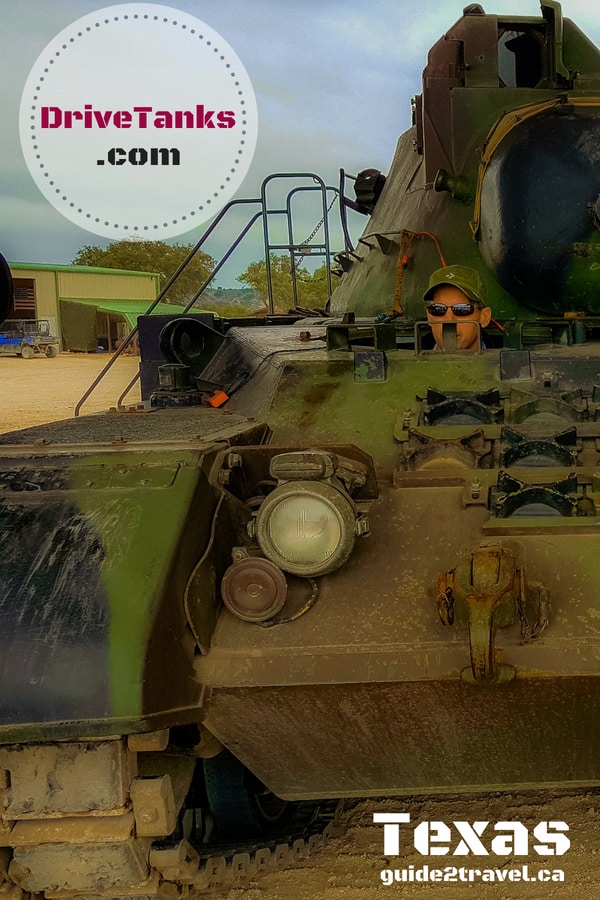