The Quest to Find Traditional Bannock

Bannock is an Indigenous food well known across North America — in fact, you could even call it a cultural icon for the first peoples of the Americas. However, it isn’t always easy for visitors to taste bannock, or other traditional foods, in Saskatchewan. That’s changing though, with the recent addition of a restaurant that’s feeling that gap in Regina.

Bannock is a form of unleavened (usually) flat bread that may be fried or baked traditionally. Historica Canada calls it a “hockey puck made of carbohydrates!”

Trivia Question: Where can you eat bannock and other Indigenous foods in Canada? (Click on the tabs above to learn more about the Regina restaurant that serves it!)

You can find traditional foods, such as bannock, at The Bannock House restaurant in Regina, Saskatchewan. Click here for information on 12 other restaurants in Canada where you can try Indigenous foods.

I visited Bannock House, along with some of my co-workers, for lunch one afternoon and found the food delicious. While I’ve eaten bannock from various recipes, the one used by the Bannock House is great. In fact, the flavor is close to one of the New Orleans’ famous beignets, which are also a fried dough.

If you’ve never tasted Indigenous foods, the Bannock House combines traditional flavors with modern favorites so even the kids are happy to give them a try. I, for example, ordered the bison chili, which was perfectly seasoned — not too hot! Bison is a great form of protein, lower in saturated fat than beef and nutrient rich. 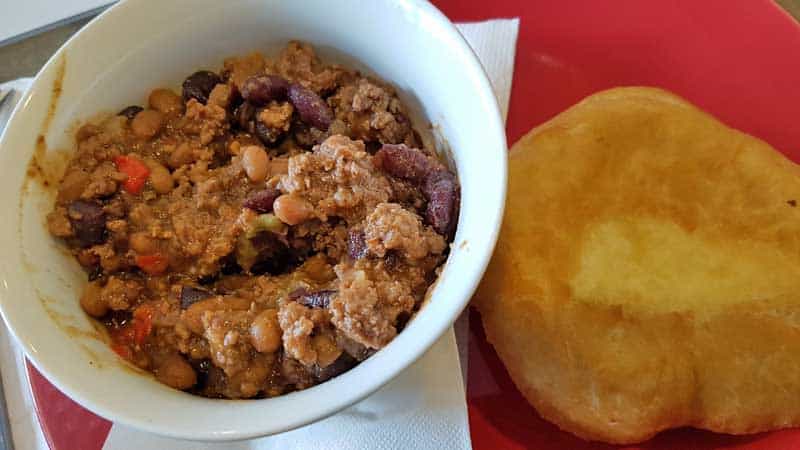 Bison chili at the Bannock House in Regina, Saskatchewan.

My co-workers ordered a variety of the options, from burgers on bannock to Indian tacos to the bannock bowl. As you can see, there’s a little bannock with most things on the menu.

And the great thing is that you can even take home a bag of fresh-made bannock to snack on later! 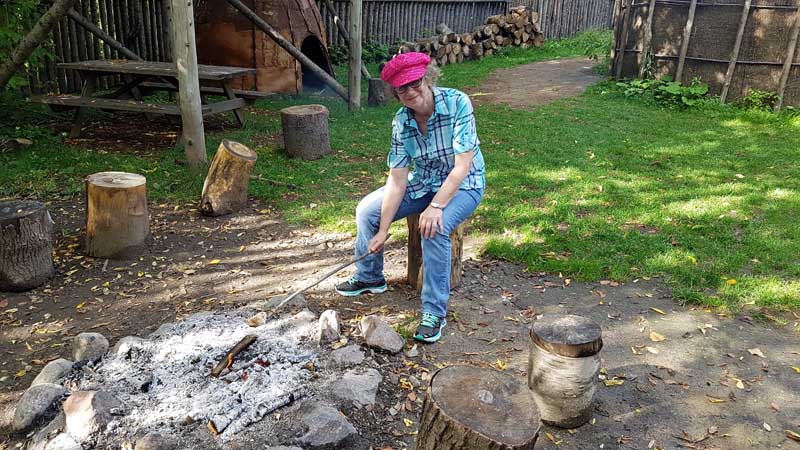 Linda Aksomitis cooking bannock over a fire at the Huron-Wendat Nation at Wendake community outside Quebec City, Quebec. #ExploreCanada

We often trace the history of something back to the origins of its name, and bannock is no exception. The word came from Scotland and the Gaelic term, bannach, which meant morsel. It was spread, of course, through the Americas by early fur traders and trappers, many of whom were from Great Britain.

Most bannock is made from wheat flour these days, but originally the trappers used barley, peameal or oatmeal, cooking the flat bread on a stone placed in front of a fire.

But while the term, bannock, may have come with the Scots, the cooking of unleavened bread was already a practice in the Americas long before their arrival. Early Indigenous peoples used a flour-like substance made from the rhizomes (roots) of various plants, then later, some used corn.

Like the ingredients, the methods of cooking bannock varied according to the community. Some First Nations cooked it like a hot dog over the fire, wrapping it around a hardwood stick. Others used clay and rock ovens, or even pit cooking in the sand. There’s no end to the ways you can cook something if you’re innovative!

Some nights the best place to be is a dingy bar out in the middle of nowhere--or at least a somewhere that's equipped with a bottle of booze and a piano. Sam Galahad finds just that somewhere in the The Red Eye Lounge, with the piano player, Buddy Toupee. If you're...
Read More

Hopkins Dining Parlour in Moose Jaw: Fine Dining and the Most Ghosts

A night out in the historic Hopkins Dining Parlour in Moose Jaw is guaranteed to have a tasty meal — and if you’re lucky, an encounter with a ghost!

The photo in the header above is of a bag of fresh fried bannock and a crock pot of bison chili, taken at the Bannock House in Regina, Saskatchewan, Canada. 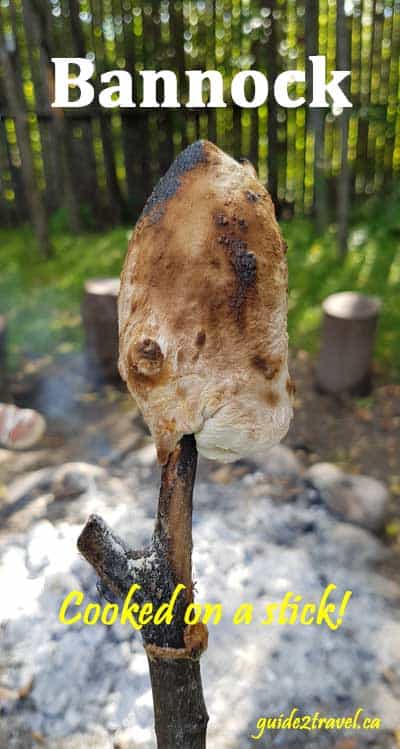 Bannock wrapped on a stick and cooked over a fire at the Huron-Wendat Nation at Wendake near Quebec City, Quebec. #ExploreCanada