There are lots of things to do in Mobile, Alabama! The oldest city in the state, it was established in 1702, and was originally the capital of French Louisiana. In fact, it’s actually the home of Mardi Gras celebrations in the U.S., since they began here in 1703. And all that history is just waiting to be discovered when you take a road trip along the Gulf Coast, like we did.

Whether you’re looking for history off the water, in Mobile’s eight historic districts, or on the water, with their battleship and submarine, Mobile is a perfect weekend destination.

Since we find military history fascinating, we started our visit at Battleship Memorial Park with the USS Alabama battleship and USS Drum submarine.

Mardi Gras was the feature of our road trip along the Gulf Coast. However, we framed it between our tank driving adventures in Texas and a visit to Battleship Memorial Park in Mobile, Alabama, for the perfect military history themed trip.

While David finds World War II artifacts the most interesting, I’m hooked on Cold War history. So, we started our visit indoors at the Aircraft Pavilion with the extensive aircraft collection, historic vehicles and war artifacts. My favorite? The 1960 spy plane, the A-12 Blackbird. I couldn’t imagine the enormous “bird” flying pretty much invisibly through the skies with its 65 foot wingspan and 125 foot length. But it did — and at the amazing speed of 2,300 miles per hour and 93,700 feet above the land. 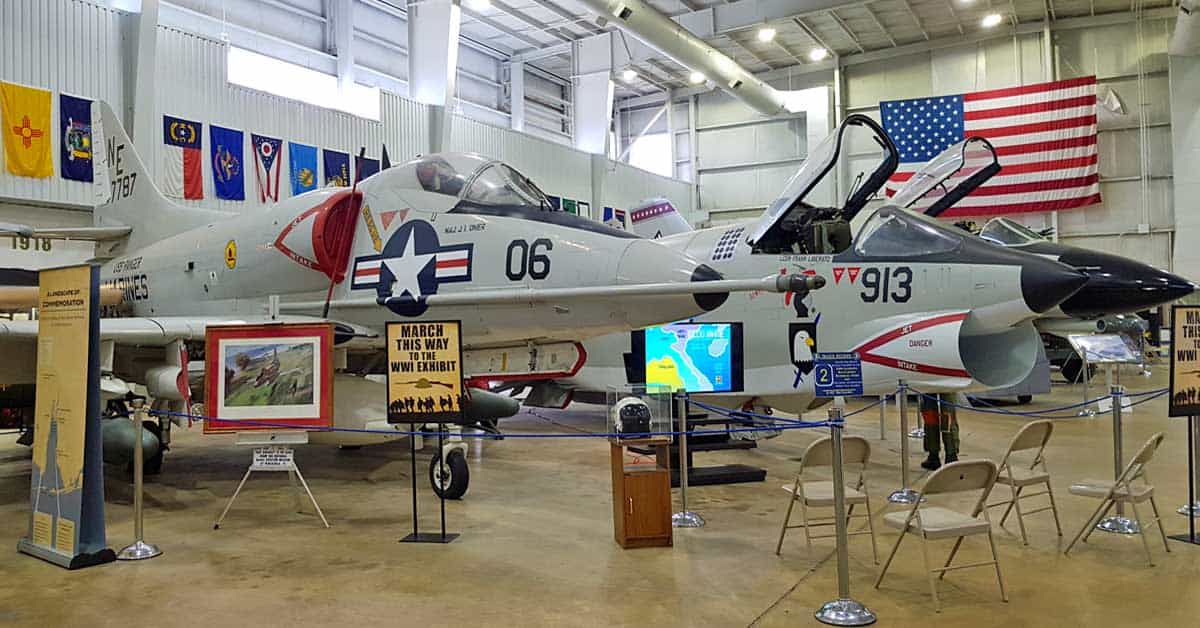 Of course, once we finished viewing all the planes we had to take a ride in the flight simulator — who can pass up an opportunity to do some aeronautic feats with both feet firmly planted on the ground? 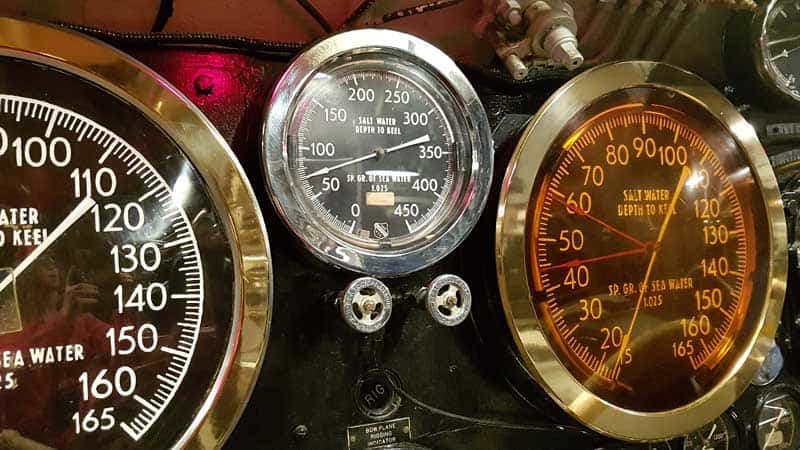 Gauges on the USS Drum submarine in Battleship Park in Mobile, Alabama.

David and I both love historic ships, so when there’s one close enough to add to an itinerary, we’re there! The great thing about visiting Battleship Memorial Park is that it features both a battleship and a submarine. And while I’d already been through a submarine, it was David’s first.

The USS Drum submarine was launched in May, 1941, half a year before the U.S. entered World War II. She’s the oldest of her class still in existence, so it’s amazing that she’s open as a museum for visiting.

Submarine visits aren’t for everyone, although I certainly find them fascinating. If you have any claustrophobia, though, that’s another story altogether, since once you’re inside the sub, it’s a one-way “street” through from the entrance to the exit.

After the sub, it was on to an afternoon workout exploring the many levels of the battleship. 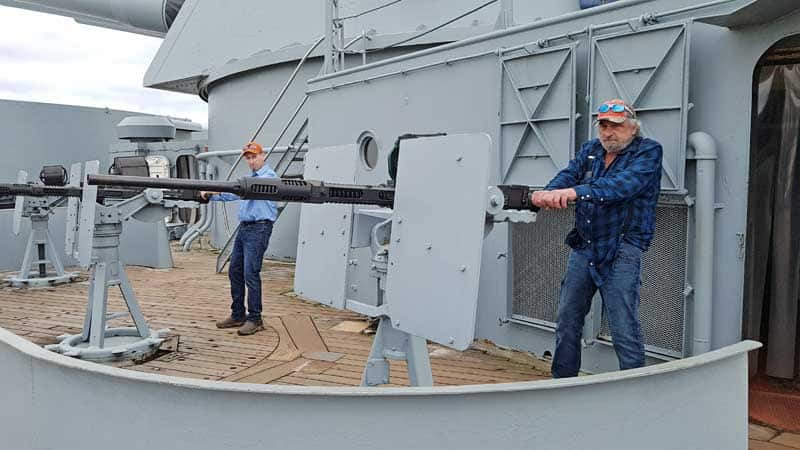 Guns on the deck of the USS Alabama battleship in Mobile, Alabama.

The battleship, USS Alabama, commissioned in 1942, has been a floating museum since 1964, and a National Historic Landmark since 1986. It’s a great place to tour at your own pace, as your way is marked with color-coded arrows that take you from bottom to top. Had it not been for Mardi Gras being the focus of our dates, we would have visited during one of their living history weekends to watch the drills and hear reenactors tell the stories of the original crew.

Some say the USS Alabama is haunted, in fact, a few visitors who have spent a night on the ship (Scouts and church groups have this option), claim to have had ghostly experiences. And no, I didn’t run into any ghosts at all during our daylight tour. 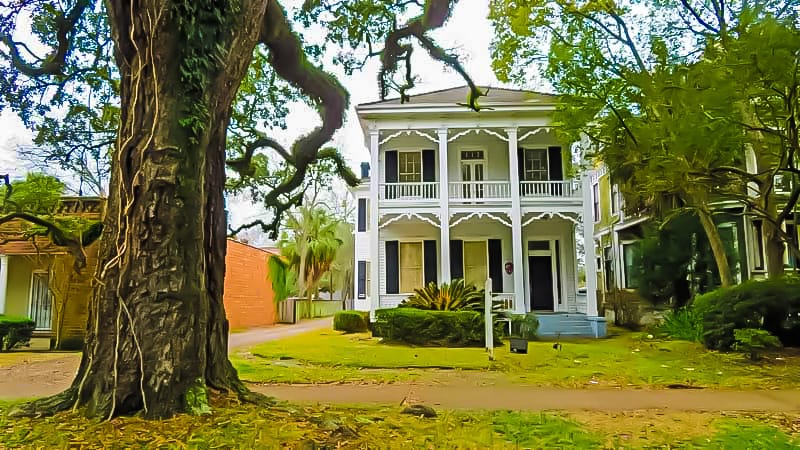 Home in an historic district of Mobile Alabama.

When it comes to things to do in Mobile, Alabama, history takes the forefront with its eight historic districts, seven of which make up the downtown area. All together, the districts cover a spectacular 600 blocks with 6000 homes! While we didn’t drive down all of the streets, those we did were full of the southern charm I love with everything from live oak trees framing Greek Revival Mansions to simple Gulf Coast style cottage houses with white picket fences.

I’m no expert on architecture, but I’d guess that every type of home ever built in the South (and likely most anywhere in North America) has an example or two in Mobile. I also appreciate the work and organization it takes to maintain this many historic districts and properties. So often over the years, history has been lost to bulldozers modernizing whole city blocks — but not in Mobile!

More Things to Do in Mobile, Alabama

Remember earlier, when I said that Mardi Gras actually started in Mobile? As you might have guessed, there’s a museum there to give you its history! Like many northerners, I love Mardi Gras, especially the costumes. It seems we never take that opportunity here to dress up and have fun unless it’s Halloween, and then it’s all about witches and zombies and ghosts.

Here’s a YouTube video from NBC to give you a sneak preview of the Mobile Carnival Museum.

When Mardi Gras carnival events started back in 1703, there was, of course, also a fortress called Fort Condé to guard Mobile Bay. While the original was removed in 1820, a 4/5 scale replica was created on the site in 1976. If you want some great views of the city and bay, as well as a quick history, you may want to stop in at The Fort of Colonial Mobile.

Of course, since Mobile is situated right on the water, there are all sorts of boating and fishing opportunities, as well as events. It’s a great place for my favorite catch of the day, Red Snapper, with a season that runs through June into the first part of July. Also in July, the city welcomes visitors to the Alabama Deep Sea Fishing Rodeo. 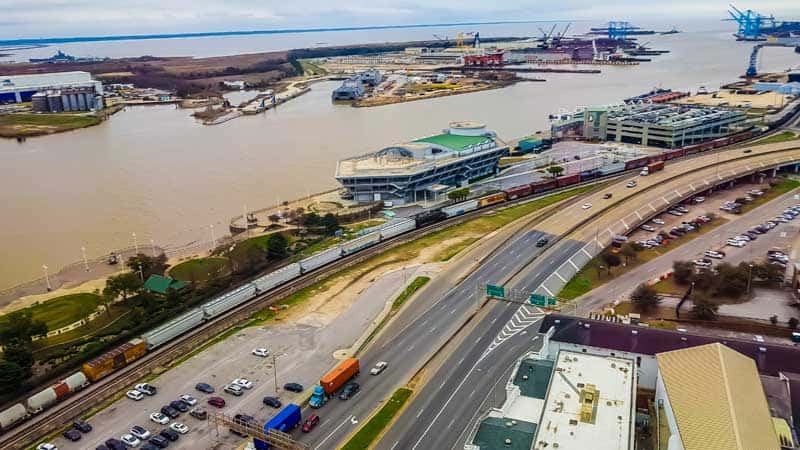 View of Mobile Bay from the Renaissance Riverview Hotel.

If you’d rather sample the seafood than catch it, Mobile has guided food tours through the historic district you can check out on a leisurely walk. You may also find the eco tours and delta safaris a great way to spend part of a day.

Places to Eat and Stay in Mobile, Alabama 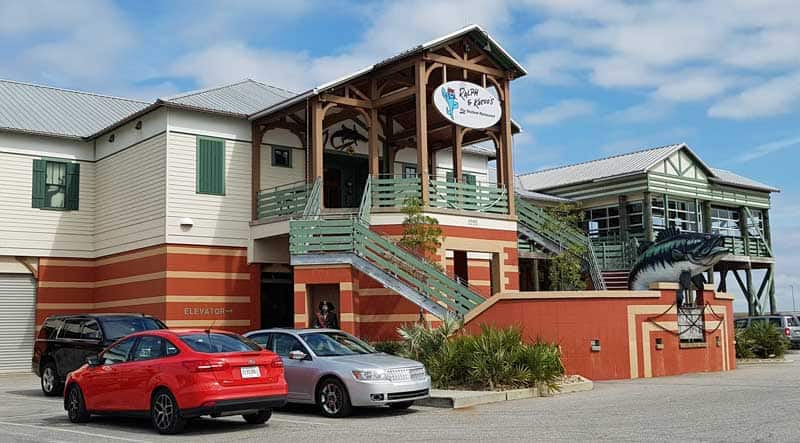 The Gulf Coast gives me an opportunity to indulge in a craving I get annually — seafood — seafood of every sort! So, once we finished up our tour of Battleship Park we decided to check out one of the seafood eateries on the causeway highway: Ralph and Kacoo’s Seafood Restaurant.

A barefoot pirate (statue!) wearing a string of large Mardi Gras beads met us at the door along with other seafaring decor — outside, below the deck, there was even a live–although somewhat slow in the 80 degree weather–alligator, sunning himself. While I’d never stopped at a Ralph and Kacoo’s before, they are actually in three additional locations: Baton Rouge and Bossier City, Louisiana, and Lufkin Texas. 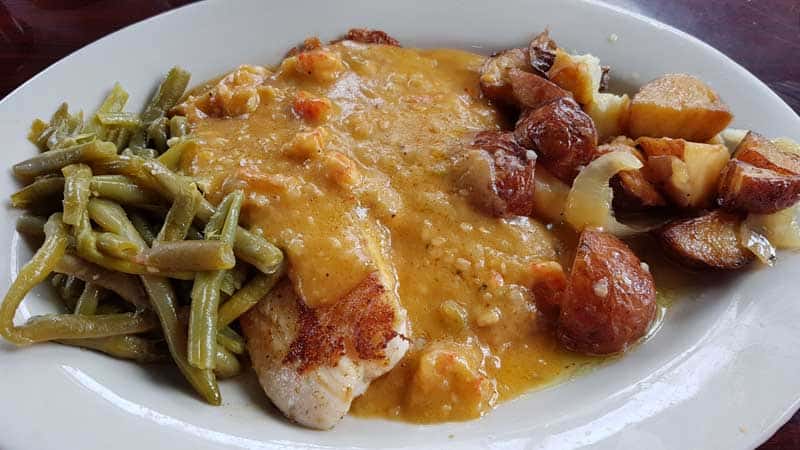 And the food? Absolutely fabulous, as they say. I savored the taste of every morsel of my ultimate favorite fish dish, fresh fillet topped with Crawfish Étouffée (a popular New Orleans special) in their Atchafalaya special. Besides being my favorite meal of our whole Gulf Coast roadtrip, it was also one of the cheapest!

Next stop, our hotel. We were guests of the Renaissance Mobile Riverview Plaza Hotel with its very convenient location off the highway and on the water. It’s also connected to the Mobile Convention Center by a Skybridge, so we could walk out over the street to catch the sunset. The best views, though, were definitely out the windows of our corner room on the 28th floor!

If you want to be pampered in Mobile, definitely check out the fine Southern hospitality at the Renaissance. The bed and pillows were oh-so-comfy. Plus, like many other Marriott Hotels, they have an Executive Lounge to relax in during the evening happy hour and for a free breakfast. In Mobile, breakfast is stone ground grits and conecuh sausages — a real treat!

Our stay at the Renaissance Mobile Riverview was hosted, although that certainly didn’t influence our opinion of the experience!

More Things to do in Alabama

March is one of those winter months that can seem longer than 31 days...but in Huntsville, Alabama, it's easy to get some "spring" in your step with a visit to the Huntsville Botanical Garden. Why March? Well, the garden celebrates Huntsville Blooms from March 15,...
Read More

Underground caves can be scary places that make you feel claustrophobic and fearful. Each twist and turn, where you squeeze into a narrow passage and feel the cold, damp rock against your skin, can wipe away any amazement you might have felt at the new experience....
Read More

Finding Inspiration at the Miracle Pottery Shop in Alabama

Valinda Miracle's hands moved up and down the wet mess of clay, her fingers shaping the vase with the gentleness a mother uses to wipe tears from a child's cheeks. Tears, though, are no stronger to Valinda, and her business, Miracle Pottery, strangely enough released...
Read More

North Alabama is just a hop-skip-and-jump away from well-known  vacation destinations like Atlanta,  Nashville, Chattanooga, and more, but it offers a treasure-trove of unique out-of-the ordinary attractions and things to do that you won't fine anywhere else. My last...
Read More

A place with the pecan as its state “nut” is bound to have great food—at least as far as my taste buds are concerned! In fact, Alabamans even have an annual Pecan Festival. Pecans, I discovered in Alabama, though, end up in a lot more than my favorite pie. The All...
Read More

The photo in the header was taken by Linda Aksomitis in an historic district in Mobile, Alabama, USA. 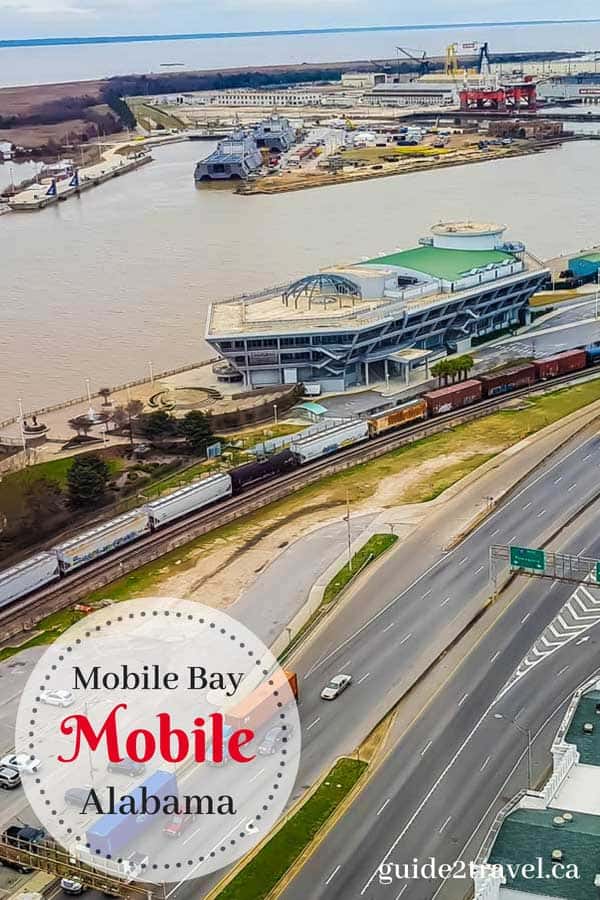 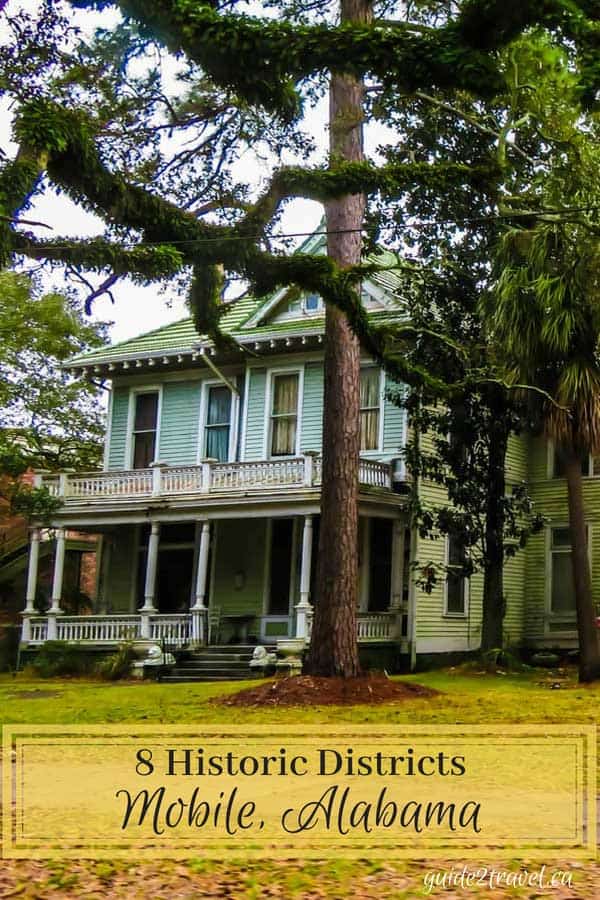 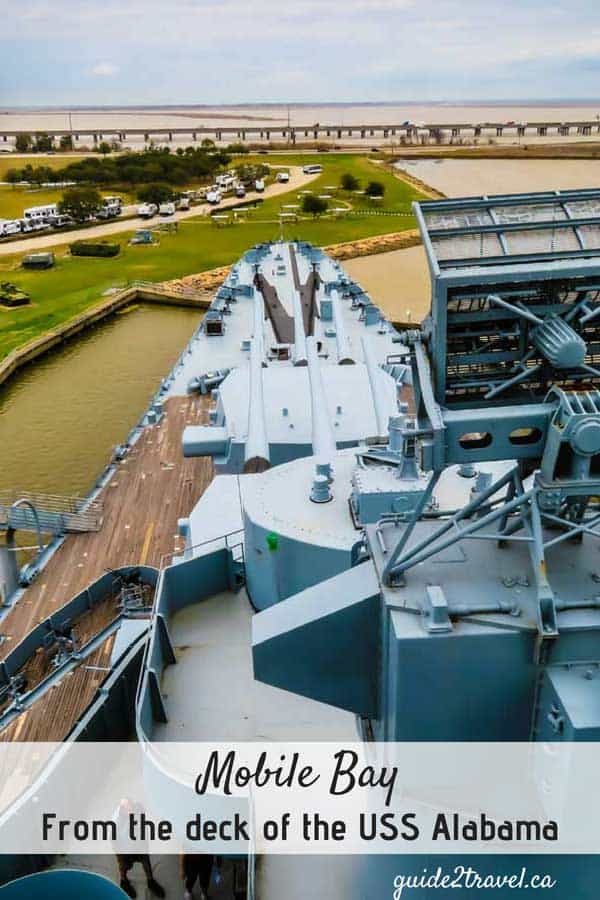