It’s hard to imagine 600 years of history and artifacts all gathered in one historic building, but that’s exactly what you get when you visit the free Army Museum in Stockholm, Sweden. The visit begins outdoors with the artillery storage unit, a regal three-story structure from the 1600s. Lawn ornaments, as you might expect, are tanks and canons. 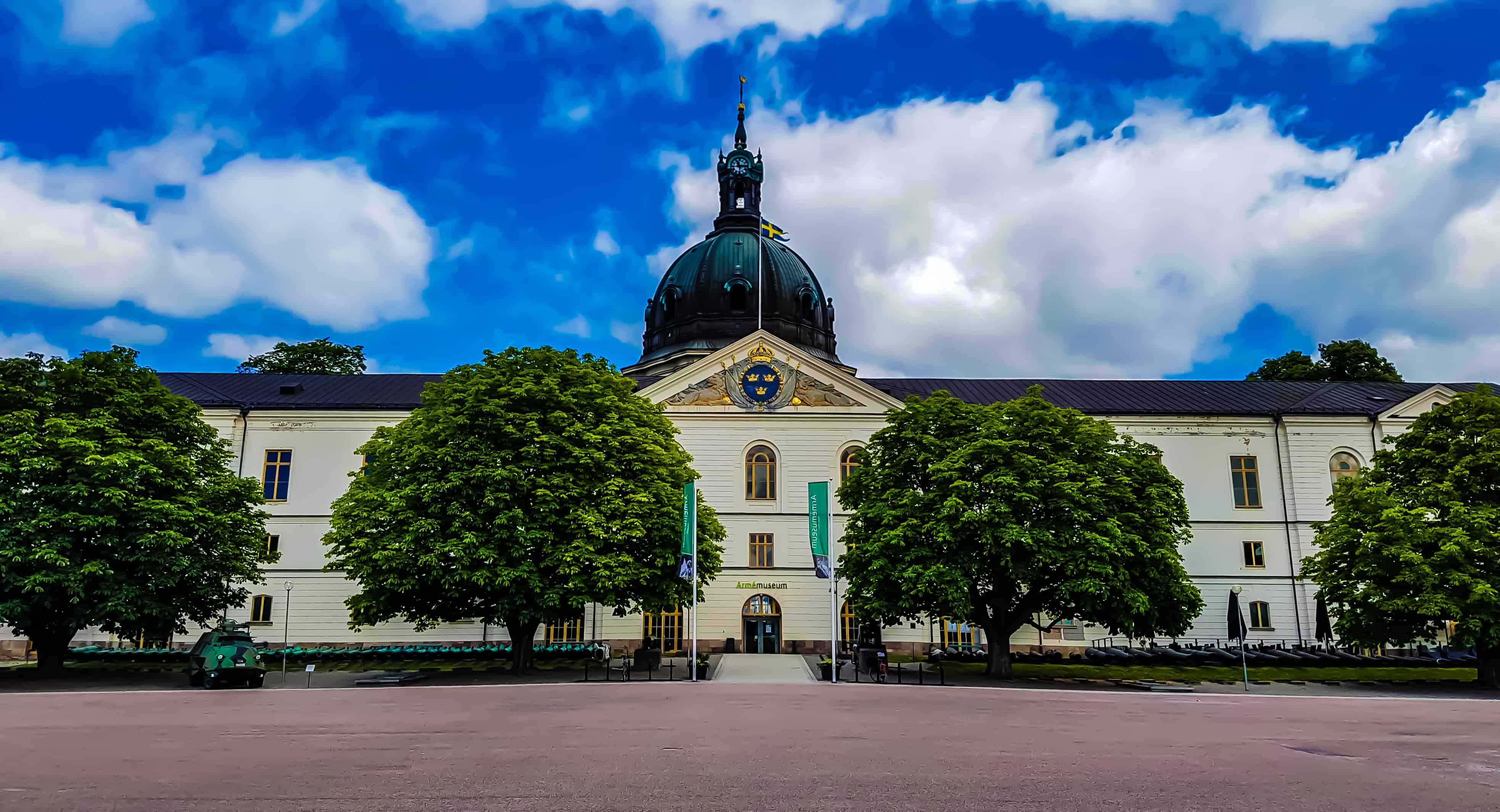 Exterior of the Army Museum in Stockholm, Sweden.

Third Floor Displays at the Army Museum in Stockholm

Our visit to Stockholm’s Army Museum was just one stop on a two-week tour of many World War II historic places and museums in Europe. It was, however, the last country we visited and the one where we had the most time to explore.

We started on the museum’s third floor, which covers the military history of the 16th to 19th centuries. Separated by period, the displays make it easy to learn about Sweden’s history.

While the museum’s layout was set up in the 1990s, the current displays were renovated and completed in 2013 and 2014. So, there are some pretty amazing dioramas and re-creations of historic battles. It’s so much more than a collection of artifacts! 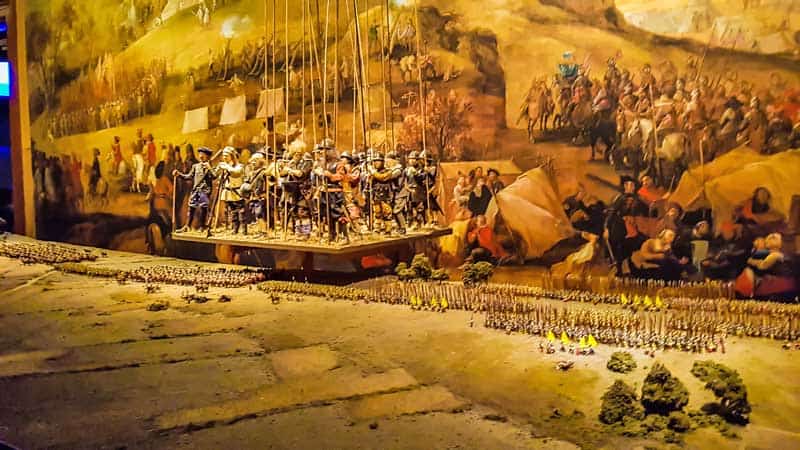 I must admit to a long-standing passion for anything related to knights and armor and castles, so it was great to find these pieces of armor. We didn’t get to the coastline to see any of Sweden’s fortifications, though, so have to save that for the next visit. 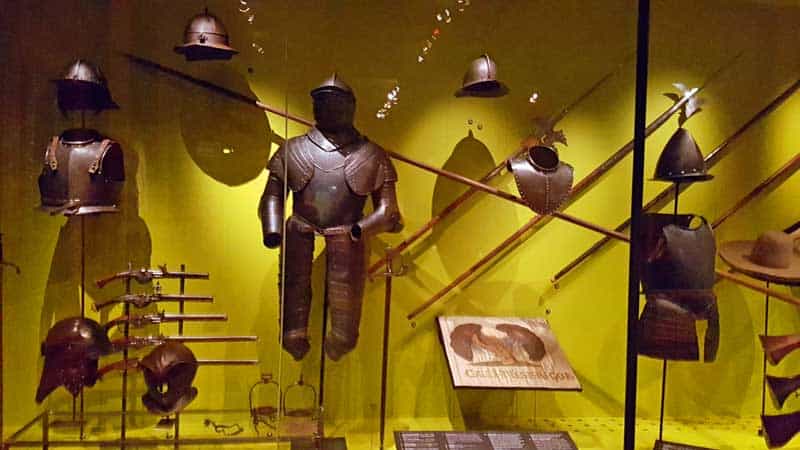 Armor display in the Army Museum.

Unfortunately for those who ended up “riding the wooden horse” instead of wearing armor, there were no rewards. This punishment, pictured below, was given for plundering or other crimes committed against civilians. The worse the crime, the longer the time! Riding the wooden horse was abolished with the law reform of 1734. 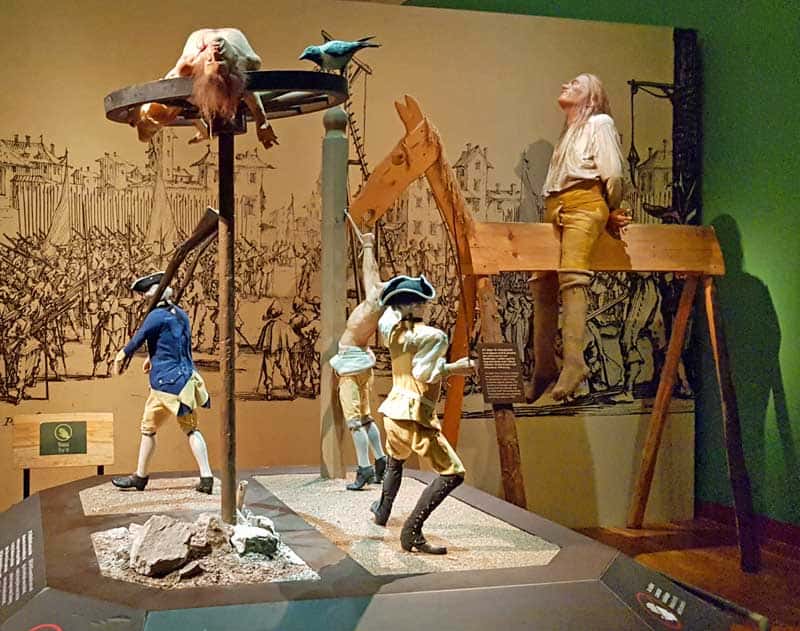 Riding the wooden horse – a form of punishment in early Europe.

Warfare, of course, changed along with technology. While we started using canons in the 12th century, by the 1800s they were bigger and heavier and shot their cannonballs much further. Below is a scene from the 1800s. 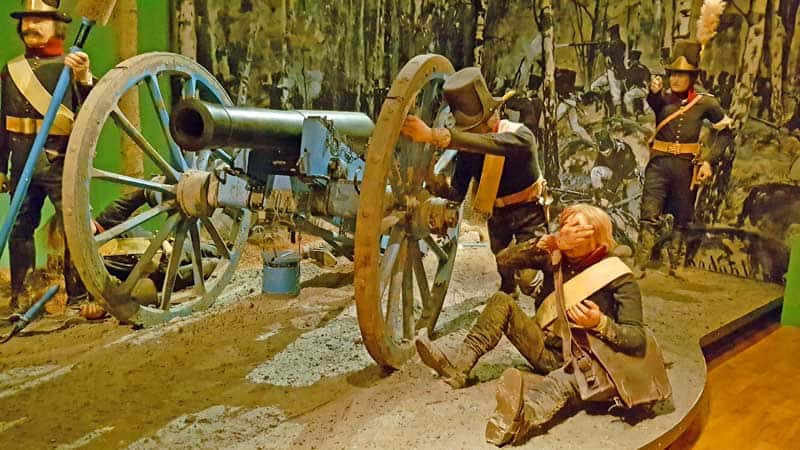 During the 1808 – 1809 Finnish War between Russia and Sweden, tens of thousands of young men were forced to join the army alongside the trained soldiers. A fifth of them died, even though the groups saw few large battles.

The second floor of the Army Museum covered the modern period that we were more familiar with. Although we’d visited many World War II sites, we found lots of additional information here.

I always find it interesting to see the change in uniforms over time. While styles may be similar, the fabrics and way they’re constructed certainly varies as you can see in this Swedish collection. 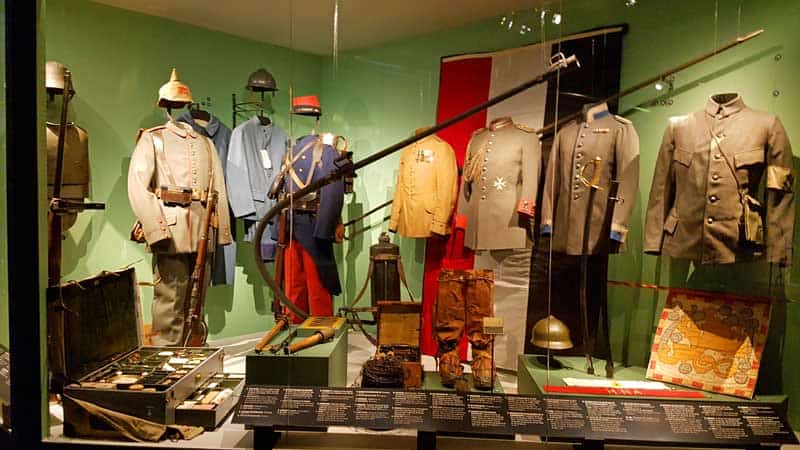 Uniforms in the Army Museum in Stockholm.

Lethal gases were first used in warfare during World War I by the French army. They used 26 mm grenades filled with tear gas (ethyl bromoacetate) in August of 1914. So, gas masks were soon developed to try to protect soldiers from its effects. 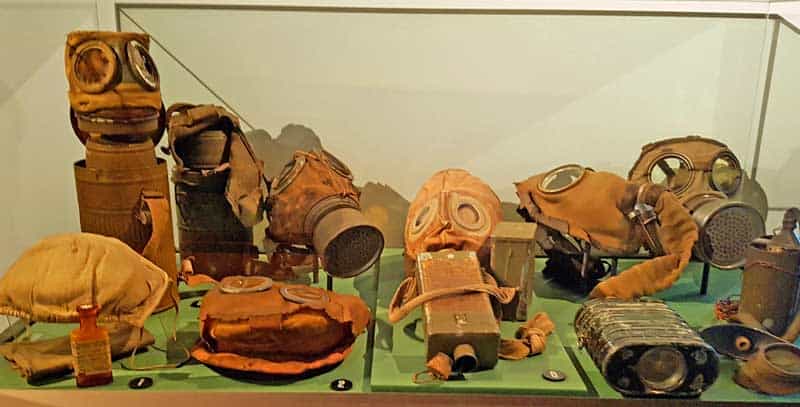 Collection of various types of gas masks in the Army Museum in Stockholm.

In North America, of course, only soldiers actually dispatched to other locations around the world experienced wearing gas masks. So, I never really thought about how a parent would get a child to keep one on until we saw this gas mask for children. It’s from the 1970s, when they came up with a solution of an integrated suit pulled over the head, that was specially adapted for 4 and 5 year-olds. 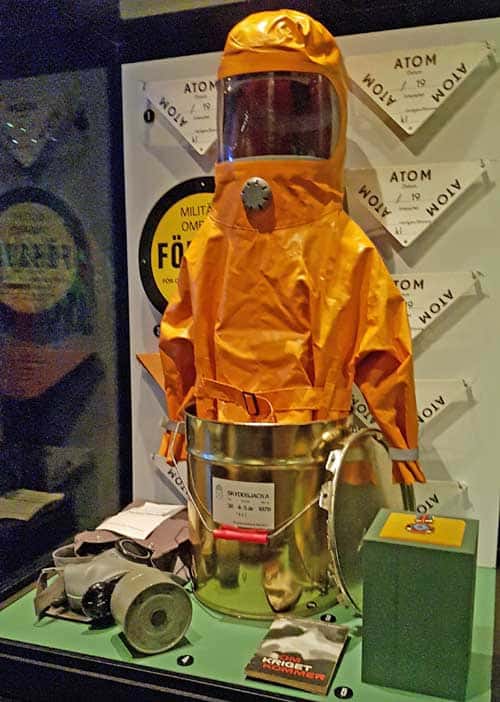 Gas protection suit for children – Type 36, in the Army Museum in Stockholm.

One thing that really surprised me was seeing a display dedicated to Hungary during the Second World War. Since the current historical fiction I’m working on is set in Hungary, post WWII, it was a great addition to my research. 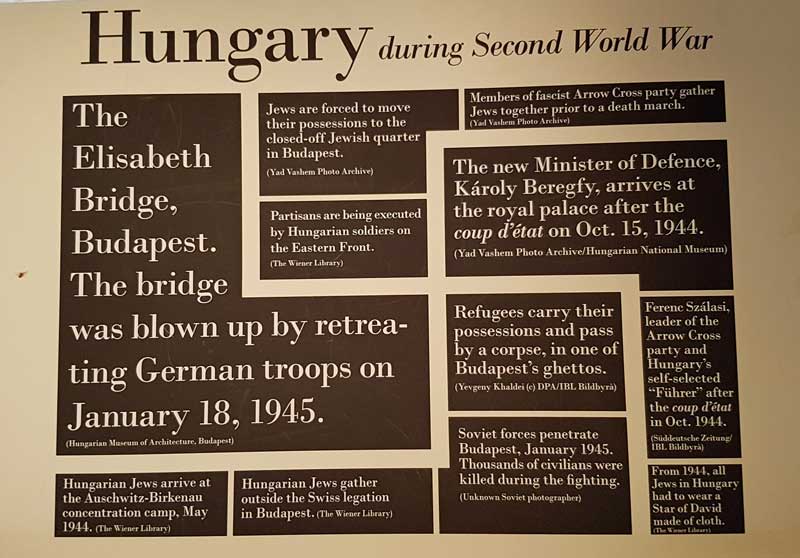 Near the end of the this floor’s displays, which went right through to the Cold War and modern weapons, we came to this fascinating reconnaissance craft developed to spot enemy troop and armored units. Unmanned, the “eye in the sky” could be used during day or night to take photos. The craft was operated in Karlsborg from the 1990s, and last flew in 2010. It’s named Ugglan, or the Owl. 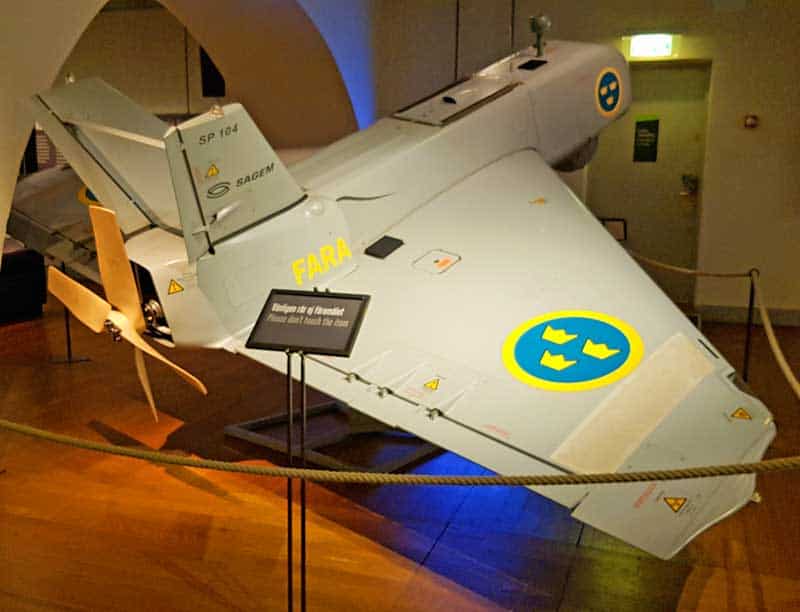 The army’s eye in the sky.

The first floor houses the artillery and temporary exhibitions, which when we were there was a tribute to women in World War II titled “Knitting Peace.”

Visit the Army Museum in Stockholm

The museum is located at Riddargatan 13, 114 51 Stockholm. It was a short walk from a stop on the hop-on, hop-off canal boat tour. The website is at: http://www.armemuseum.se/languages/english/

There’s no admission and it’s open year-round. There are free tours conducted in English during the summer. All of the exhibits have an English translation as well as Swedish, so it’s easy to follow.

The map below takes you from our hotel, the Radisson Blu Waterfront, to the Army Museum.

More Things to Do in Stockholm, Sweden

The photo in the header was taken at the Army Museum in Stockholm, Sweden. It depicts cavalry during the warfare of Charles X11. At the time, 125 riders formed a squadron that rode close together in three ranks with their swords drawn and hit the enemy like a massive wedge. 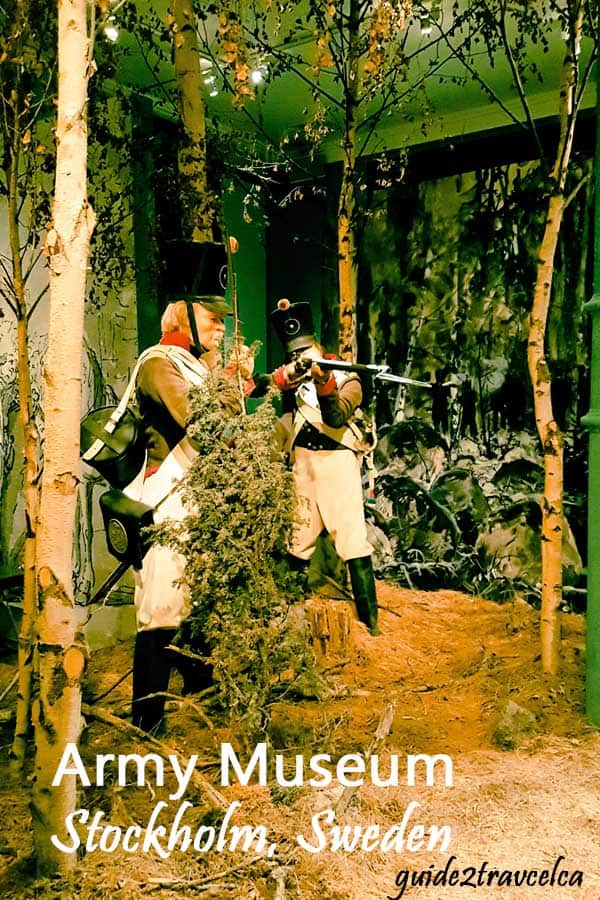 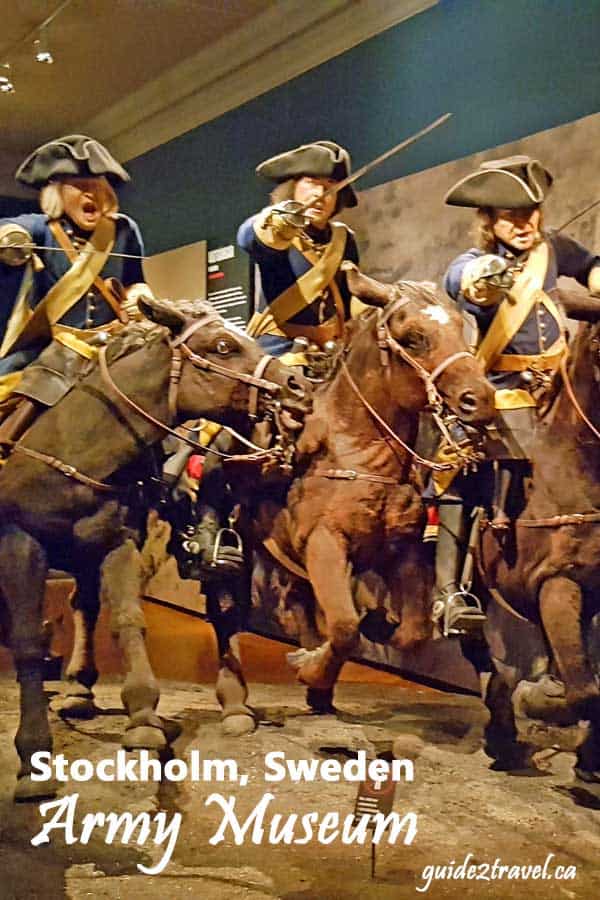