Giant plantations — sprawling complexes made up of 30 to 40 buildings and home to hundreds — often define the Antebellum era of the deep south. While there are dozens of plantations open to visitors today, few are as intact as the Evergreen Plantation, National Landmark site, near New Orleans, Louisiana. 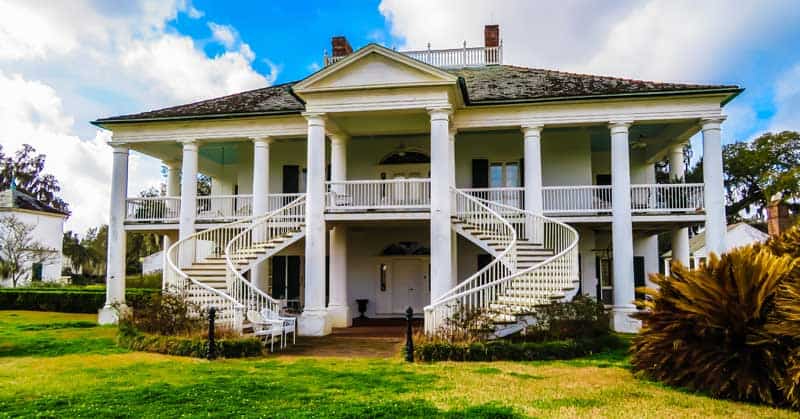 Double staircase on the front of Evergreen Plantation house.

Evergreen Plantation is a privately owned plantation open for public tours. Unlike many, it’s still a working sugar cane plantation where people live and work. In fact, it joins Mount Vernon and Gettysburg in being granted landmark status for its agricultural acreage.

Historically, plantations came in various sizes, with all of them producing cash crops of some sort instead of subsistence agriculture, like a farm. Today, Evergreen is one of the largest, most intact plantation complexes in the South. It has 37 buildings on the National Register of Historic Places, 4/5 being from the Antebellum era.

The beautiful, Greek Revival style main house with its Federal accents is the main attraction at Evergreen. A pair of helical staircases extending from the facade are one of its most striking features — and certainly one of my favorite images. 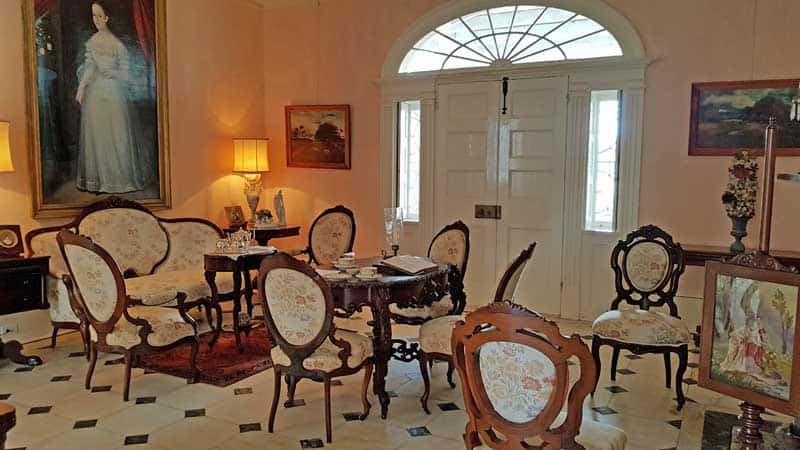 Evergreen Plantation, as you’d expect, is only open during guided tours. I can guarantee, however, that you’ll leave with a much greater understanding of Antebellum USA, as well as knowledge about the history of Evergreen at the end of your tour.

Once you climb the staircase, you enter the plantation that began as a French Creole home built in the early 1790s. The house is built traditionally, so the main floor is three rooms wide and one room deep. Front and back wide galleries, or verandas, provided a cool place to spend the evening on hot Louisiana nights back in Antebellum times. The back galleries were later enclosed by Matilda Gray to give interior access to all the rooms.

When it was purchased by Matilda Gray in 1944, the buildings and plantation had been abandoned, so she started a restoration project continued by the current owner, her niece, Matilda Gray Stream. They’ve acquired the furnishings over the years, using nineteenth century antiques and paintings. 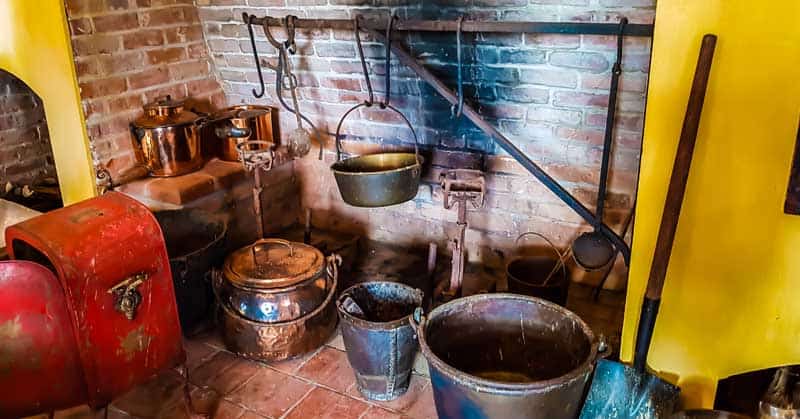 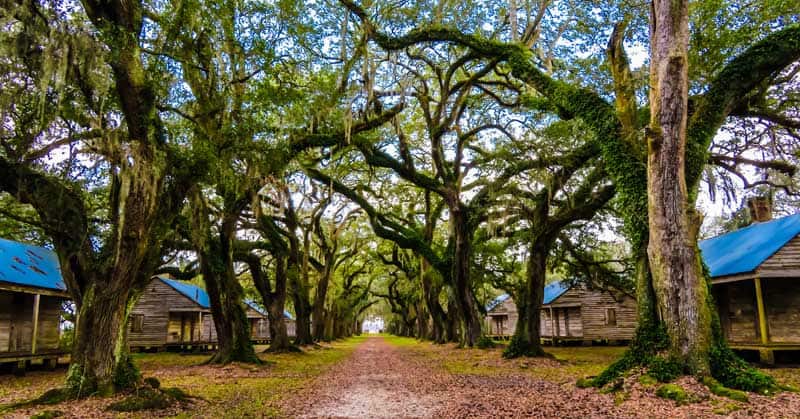 Double row of slave cabins with an alley of live oak trees.

In 1944, when Mrs. Gray purchased Evergreen Plantation, the double row of twenty-two slave cabins were mostly occupied by sugar cane workers. While the cabins weren’t included in the original restoration, they’ve been repaired and patched to keep them intact and authentic.

During the Antebellum era, thousands upon thousands of cabins that looked very similar to these filled the south. Now, however, finding them still standing quietly under the two long rows of live oak trees is a very rare site.

An 1835 document displayed at Evergreen Plantation lists the fifty-four persons who were enslaved at the time, along with their skills. That year, the owner, Pierre Clidamant Becnel, had overspent on a renovation and fallen into bankruptcy. His cousin, Lezin Becnel, purchased the property, allowing Pierre and his family to stay until they could repurchase it the following year.

Plantation visits are one of my favorite things to do when I’m in Louisiana — and I’ve visited quite a few! Evergreen proved to be one of the most interesting and well preserved.

Evergreen Plantation on the Web

Check out admission fees and tour hours at: http://evergreenplantation.org/

Getting to Evergreen Plantation

More Things to Do in Louisiana

The Cajun Grand Old Opry with its Cajun music and Zydeco music, in Eunice, Louisiana, is just one of many Cajun cultural experiences you’ll have here.

Louisiana Alligators: In the Wild, at the Farm, and on the Table

Finding alligators in Louisiana in February can be difficult even on a day hitting 60 degrees, the average monthly high. My first visit to this warm winter destination, some fifteen years ago, the only alligator I saw was a foot-long little guy the tour guide had...
Read More

The photo in the header is of the rear entrance of Evergreen Plantation near New Orleans, Louisiana. 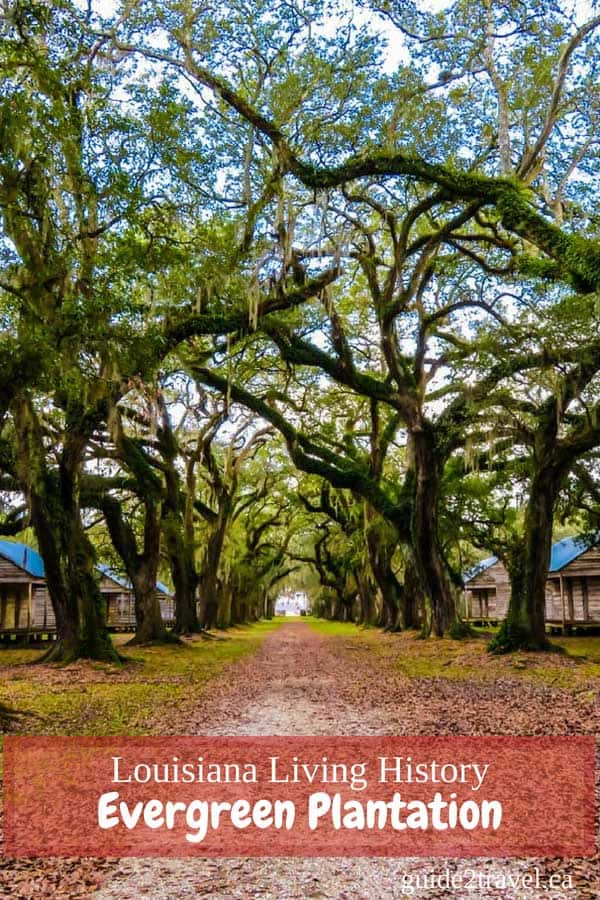 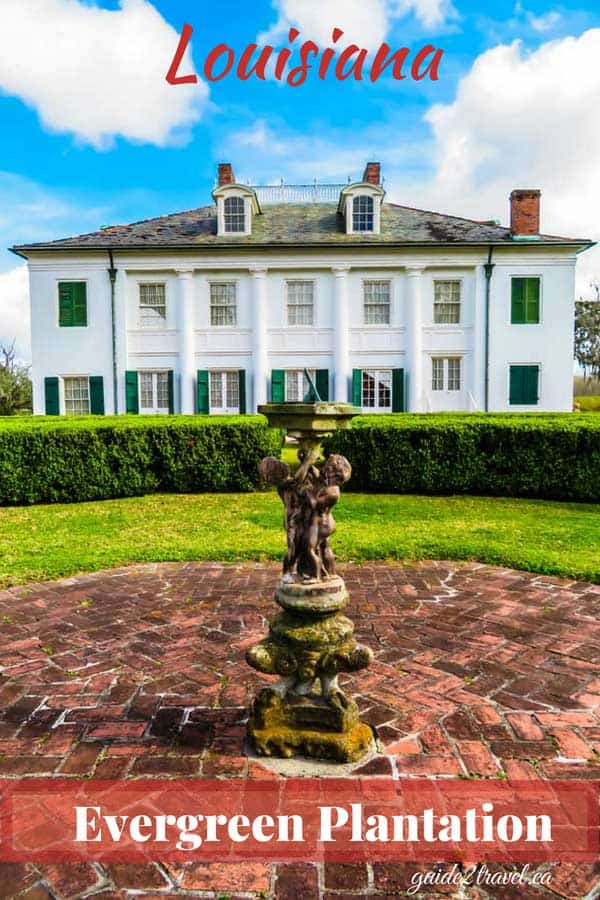 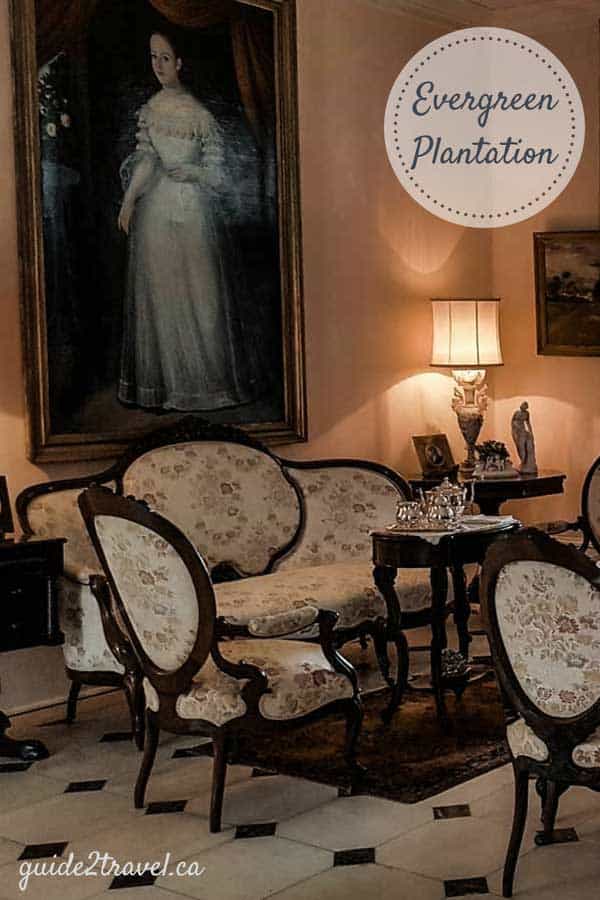