When it comes to large machines, earth moving equipment tops many of the lists. And in Saskatchewan, that’s certainly true! Big Lou, the nickname for a Bucyrus-Erie 2570-W Dragline at the Estevan Mine Site, is one of the most impressive — especially when you can get a close look on a free Estevan Energy Tour. 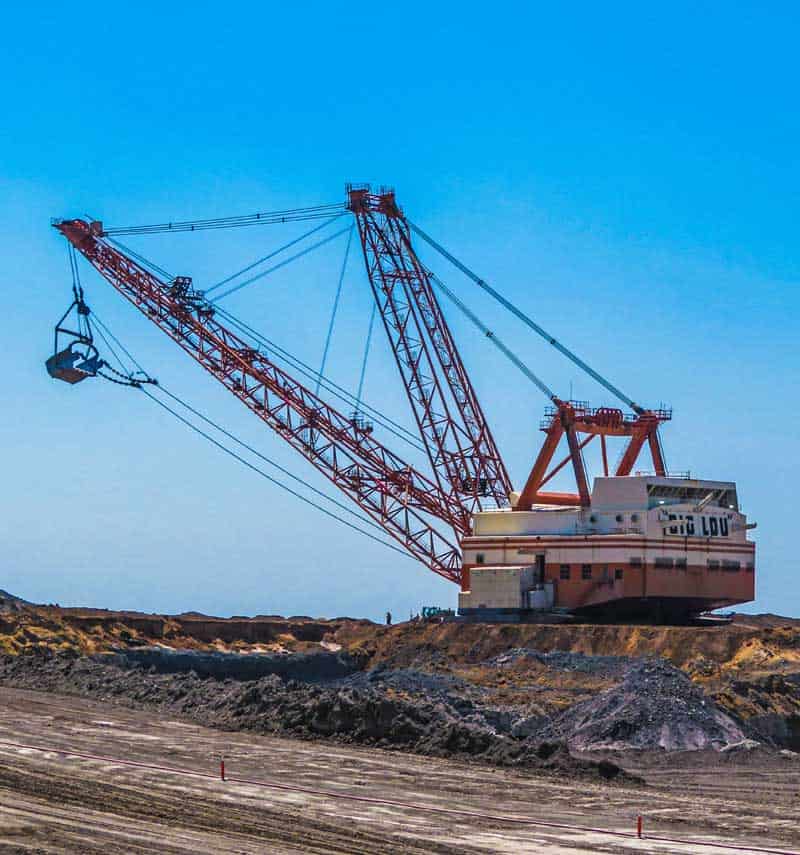 Can you guess how big the bucket is on Big Lou? Keep reading to find out!

We’ve been driving through Estevan for decades on our way to the US, but this spring decided to stop and actually take the Estevan Energy Tour. One of the reasons was David’s interest in machines — the bigger the better. 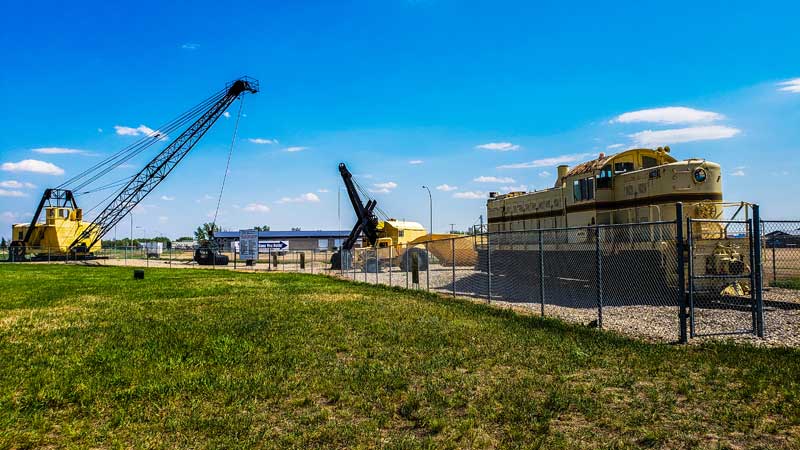 A display of outdoor mining machines at the Souris Valley Museum welcomes you to Estevan when you drive in from Weyburn on Hwy 39.

Tours are free and offered from the May long weekend until the September long weekend, leaving from the Estevan Visitor Information Centre. We booked in advance (recommended), joining our guide, Chloe, in the large passenger van provided by the mine.

Taking about two hours, the tour includes Shand Power Station, Shand Greenhouse and Estevan Coal Mine. Chloe, a university student, really knew her stuff on all aspects of the tour! She was an amazing source of history and geological facts about this industry that’s been important in Saskatchewan for over a century.

History of Coal in Saskatchewan

While many don’t realize the importance of mining in Saskatchewan, few would be surprised to hear that coal was one of the first things mined. In 2016, mining in Saskatchewan had the fourth highest mineral sales in Canada. Today, the province has the largest high grade reserves in the world for both potash and uranium.

But back to history…

The first prairie coal expedition, from Winnipeg to Roche Percee (near Estevan), happened about 1882. When moving the coal turned out to be too costly, locals started doing their own mining and selling coal for heat. In fact, people could get a whole wagon load of coal to heat their homes for a $1 in the late 1800s, as long as they helped dig it!

As it turns out, the majority of the coal mined in Saskatchewan comes from the Lower Estevan zone, which averages 3.5 m (11.5 ft) in thickness. This rich resource has made Estevan the Energy Capital of the province. 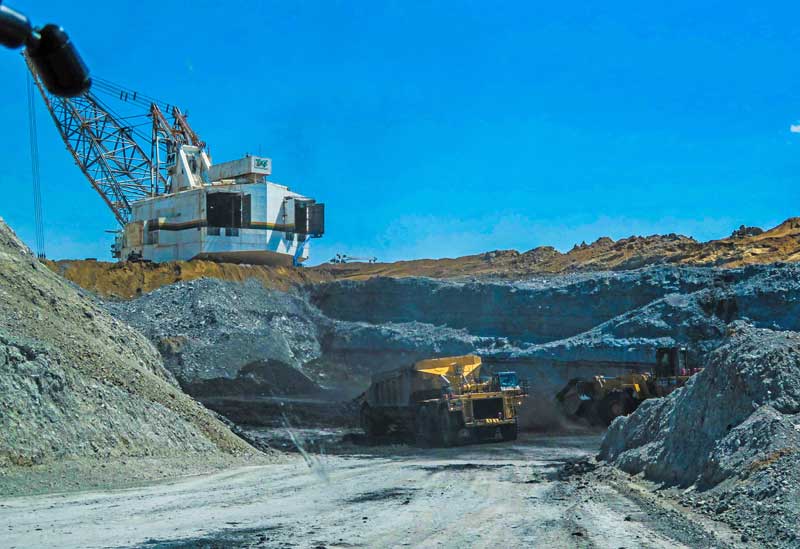 Veins of coal below the surface of the land.

Strip mining came along by the end of the 1920s and is what produced the “badlands” you see along the highway today when you head to the border at North Portal. While these grassed-over mounds and ponds make a great animal habitat, they’re not so productive for anything else. So, the provincial government instituted rules for reclaiming the land.

While the tour takes you through the coal mining and power production process, you may be wondering, as I did, how a greenhouse ends up as a main stop on the tour. It’s because that’s where they grow all the trees and plants to reclaim the land after the machines have removed the coal. 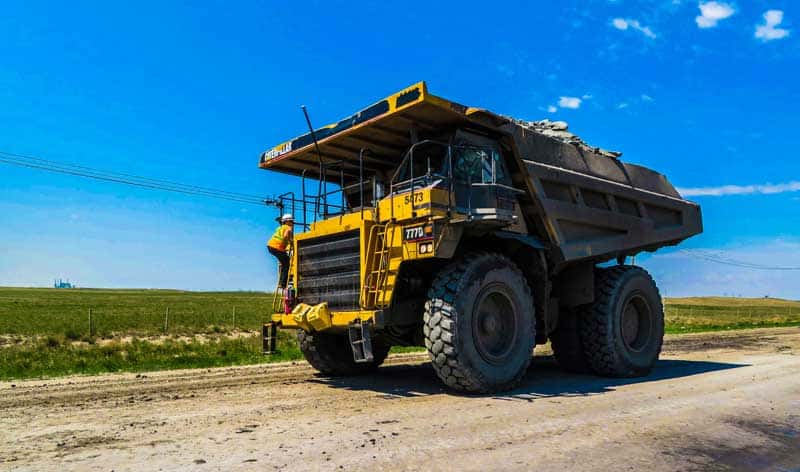 Worker climbing up a ladder on a mining truck.

In two hours we saw a lot of big machines. However, it’s pretty hard to explain exactly how big unless there’s something else in the photo to give perspective. So, I included the photo above that shows a worker climbing into his truck.

All I can say is that I’m glad I’m not responsible for driving it (incidentally many women do work at the mine site)!

Of course, the highlight was watching Big Lou rotate in a circle, working its way slowly around its station. With an overall height of 62.2 m (204 ft), width of 33.7 m (110 ft), and length of 129 m (423 ft), the machine reminded me of terraforming machines I’ve seen in science fiction machines.

Just in case you’ve been wondering about the answer to that trivia question, here it is.

You can get all of the stats on Big Lou and its history from Doug Gents History Pages at: https://www.gent.name/sask:coal:draglines:estevanbucyruserie2570wdragline

Who has seen the wind? Southeast Saskatchewan Library Week Tour

Saskatoon--Saskatchewan's bridge city--is the perfect getaway, no matter what kinds of attractions you're looking for! There are lots of things to do, with something for every family member to enjoy. We booked into Saskatoon for one of the summer's biggest motorsports...
Read More

The best tasting walleye is one you've caught yourself--from casting off right through to fighting your fish until it hits the net. Saskatchewan is a fresh water fishing paradise, although admittedly the vast majority of our 100,000 lakes are in central and northern...
Read More

The photo in the header was taken of the outdoor display of mining equipment at the Souris Valley Museum in Estevan, Saskatchewan, Canada. The display is right along Hwy 39 when you approach Estevan from Weyburn. 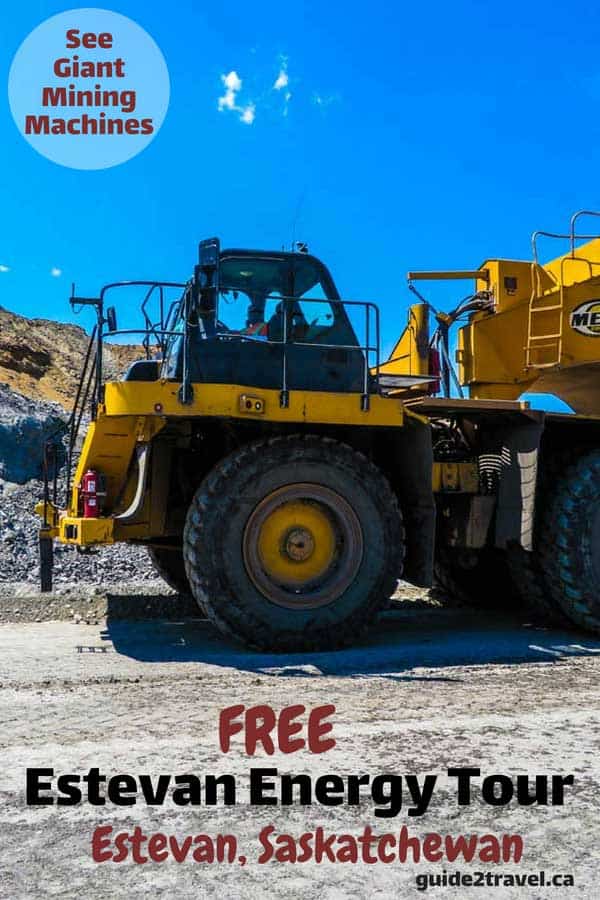 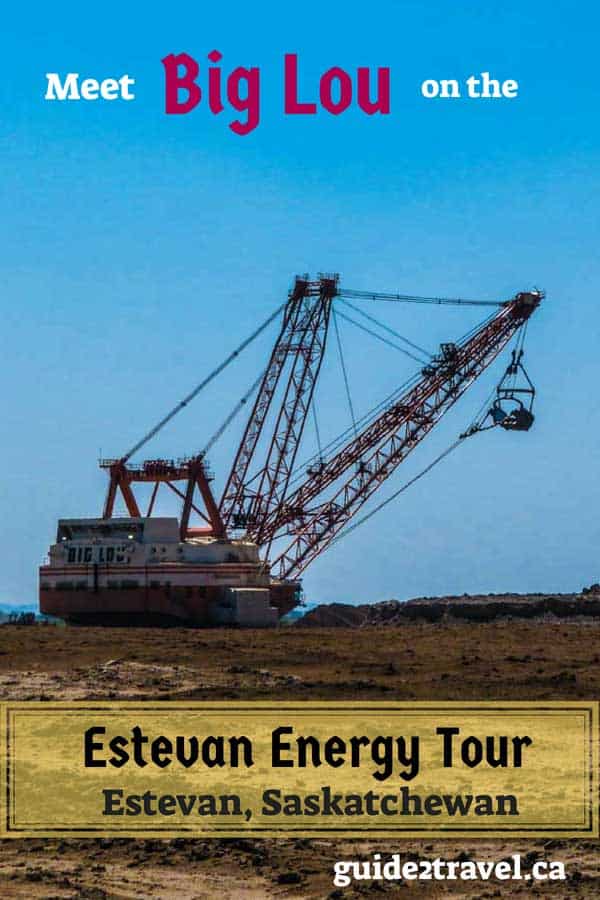