The Colors of Fall!

A road trip through Glacier National Park is beautiful in any season, but add in the colors of fall leaves, and it’s truly stunning. With the golds and yellows of the larch and aspen trees, along with the touches of orange and red from the maples, the predominantly evergreen forest takes on a new perspective.

Fall is my favorite time of the year, so David and I always plan a trip to take in the fall foliage. It can be hard to plan ahead though, as leaf season varies depending on a few factors. The main ones are: temperature and precipitation.

While the East coast, from Maine right through to Georgia, may get most of the fanfare when it comes to leaf peeping, there’s plenty of color in the Midwest and West as well. In fact, following the fall foliage trail is so popular there are a variety of websites dedicated to keeping travelers up to date! Check out one at the Fall Foliage Network.

But back to our September roadtrip through East Glacier and West Glacier. 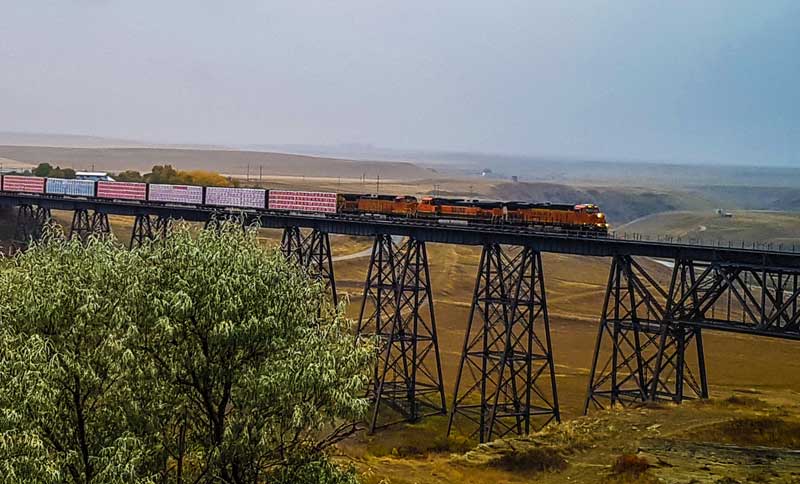 Railroad Bridge built in 1900 at Cut Bank, Montana, by the Great Northern Railroad.

Our road trip took us on the Great Northern Highway, U.S. Highway #2, through the Southern end of Glacier National Park. The highway runs for nearly 3600 miles, from near Seattle on the Pacific Ocean to Bar Harbor and Acadia National Park on the Atlantic. Its name, Great Northern, celebrates the historic transcontinental railroad that opened the west to the pioneers.

One of the greatest transcontinental railroads, the Great Northern also has the distinction of being the only privately funded, successfully built, railroad in U.S. history. Its builder — James J. Hill. At its peak, Hill’s monumental dream consisted of over 8000 miles of track! Now, that’s a big transportation system. 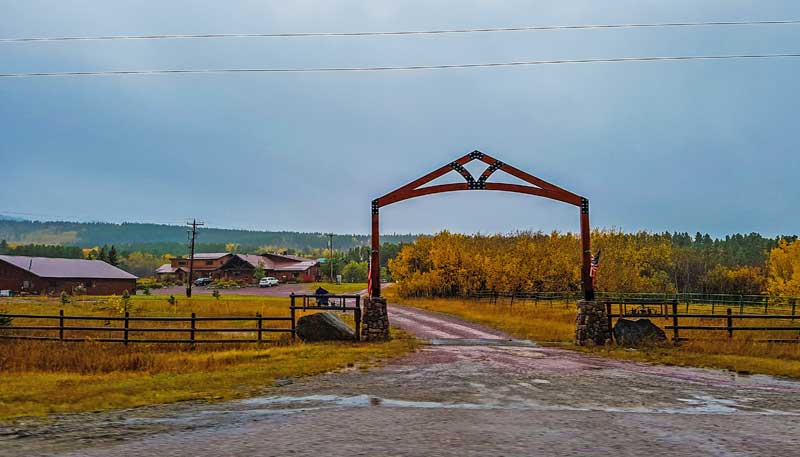 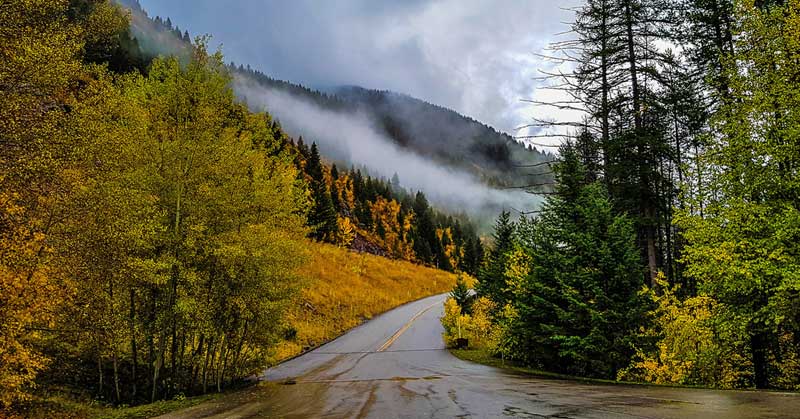 Some sixty plus years later, in 1995, Waterton-Glacier International Peace Park was designated a UNESCO World Heritage site. The criteria considered include its mountain scenery, diversity of plant and animal life, and glacial landforms. 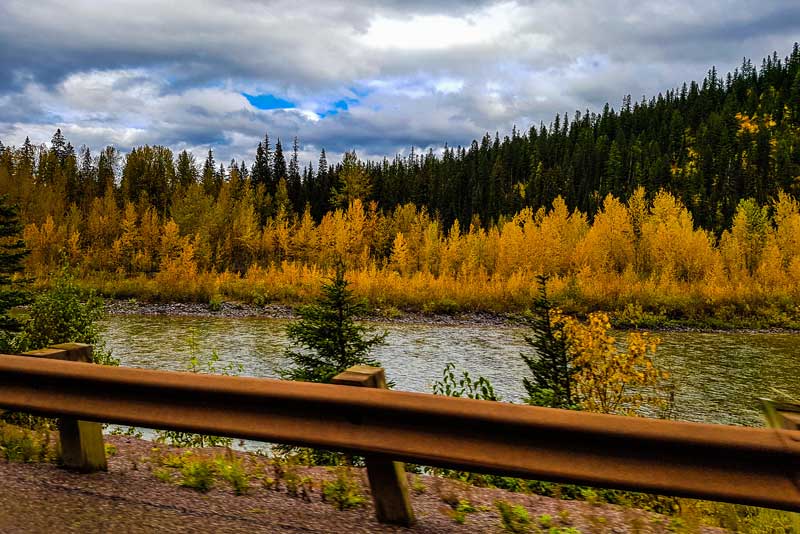 How does this happen? Well, you need three sides to flow in three directions, not two. So, Triple Divide is where the two continental divides, the Great Divide and the Laurentian Divide, meet. 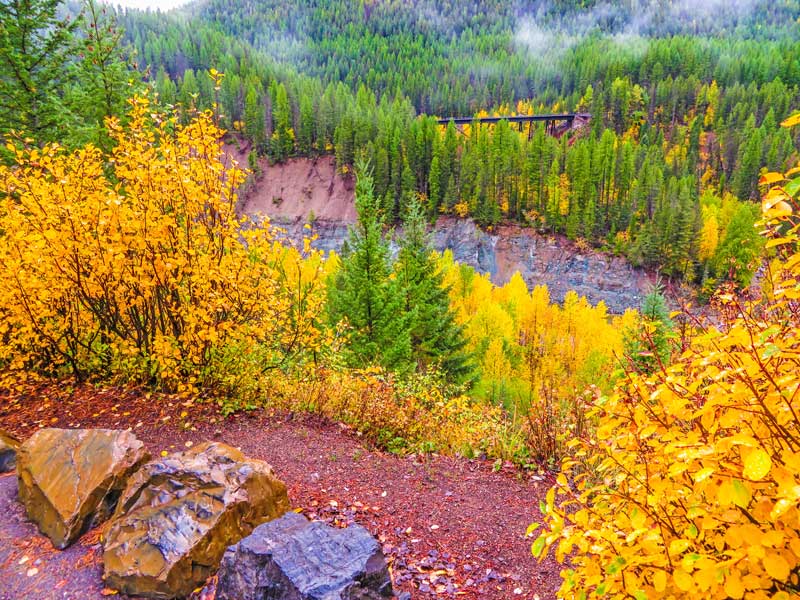 Goats come to this area to lick minerals from the exposed river bank.

Of course a drive is great, but even on a wet, misty day like our road trip through Glacier, sometimes you just have to get out and feel the rain.

That place turned out to be Goat Lick Overlook.

Goat Lick really is named for mountain goats that make up to a four-mile arduous trek to lick the mineral salts in the area rocks. So what’s so addictive about these rocks? Well, they contain calcium, potassium, and magnesium, plus lesser quantities of sodium and phosphorus. Typically goats lose these elements from their bones during the winter.

It was a perfect day for goats, too, as they like to lick the wet seeps that contain more minerals. And if you’re thinking this is like stepping out for an ice cream cone when you have a craving, that’s far from it! Indeed, it’s more like a a salt-marathon, since a goat typically licks for 4-6 hours straight, taking a few rest breaks until it has put in 24 hours of licking on its first seasonal visit to the site. 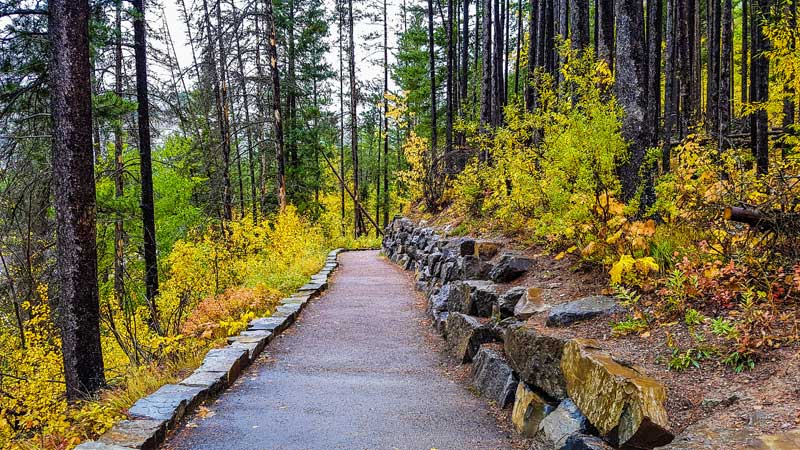 So, we watched the goats for a bit, hiked a bit, and generally soaked up the scenery while getting soaked ourselves. If you’ve visited Glacier Park tell us about your visit in the comments!

This part of our road trip took us from Cut Bank, Montana, to Polson, Montana.

More Places to Visit in Montana

If you’re visiting Glacier National Park, you must make the 70 mile trip to see the Museum of America Museum in Polson & huge collection of Americana.

Where to Get Snowed In… On Purpose

The Range Riders Museum in Miles City, Montana, was started in 1939. Started by 5 local ranchers, it preserves Western artifacts and stories.

Get a feel for the old west in the Montana Bar in Miles City, Montana. More than a century old and full of originals furnishings, it offers drinks & dining.

East Glacier in the Rain — A Road Trip

Glacier Park was established more than a century ago, back in 1910. Over 350 locations in the park are on the National Historic Landmarks record of historic places. Day 2: Glacier Park & Polson, Montana Our morning drive to East Glacier started out at 9 a.m. as we set...
Read More

The photo in the header above was taken by Linda Aksomitis in Glacier National Park, Montana, USA. 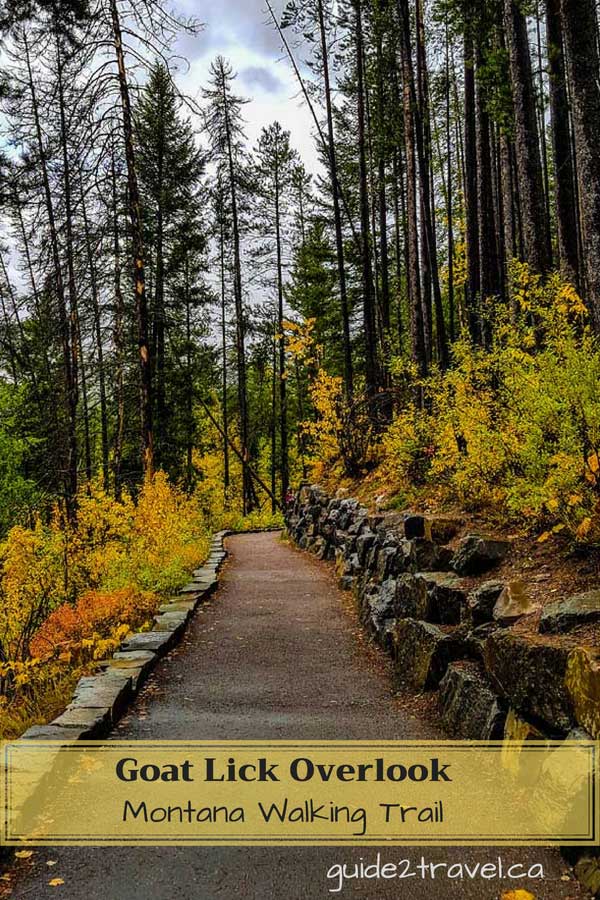 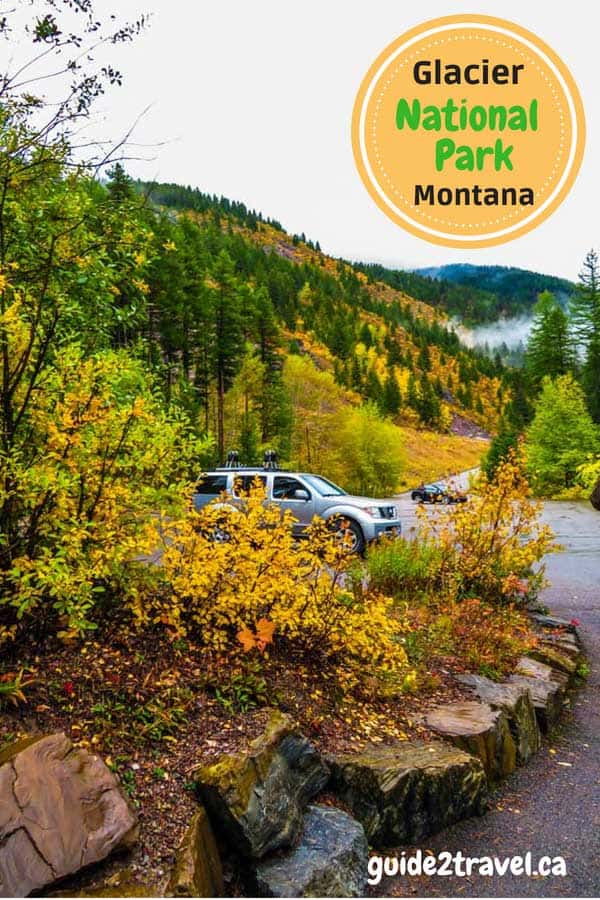