...travel adventures with a twist of history! Latest ArticlesAdventures
;

Boston, Massachusetts, is the perfect destination for history lovers. From the Boston Tea Party that started the American Revolution in the late 1700s, to Cheers, the 1980s sitcom set in a bar, it’s a city begging to tell you its historic tales.

Here are some of the things to do in Boston that we enjoyed the most. 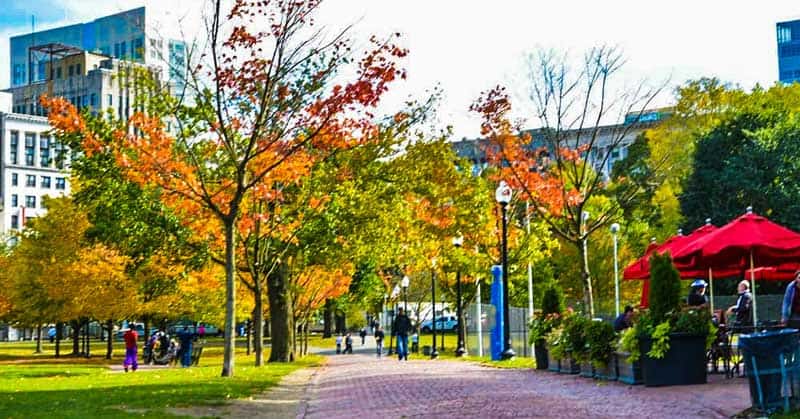 Boston Common in the fall.

The Boston Common is the oldest park in America–which isn’t surprising, since the park was founded nearly 400 years ago in 1634!

Boston had always been high on our list of places to see on the East coast. While I had planned to stay in an historic part of the city, I didn’t have much success with finding a hotel during leaf season, so we took one near the subway and decided to explore by public transit.

We ended up at our first stop, the Boston Common, by accident rather than design. While we had to purchase some mints to get the vendor at the JFK/UMass Station to tell us a stop for the hop on hop off buses, his suggestion worked out well.

Indeed, the Boston Common is a main stop on the tour bus route. We were quite amazed to come up from the underground train and find ourselves in the middle of a beautiful park, though! 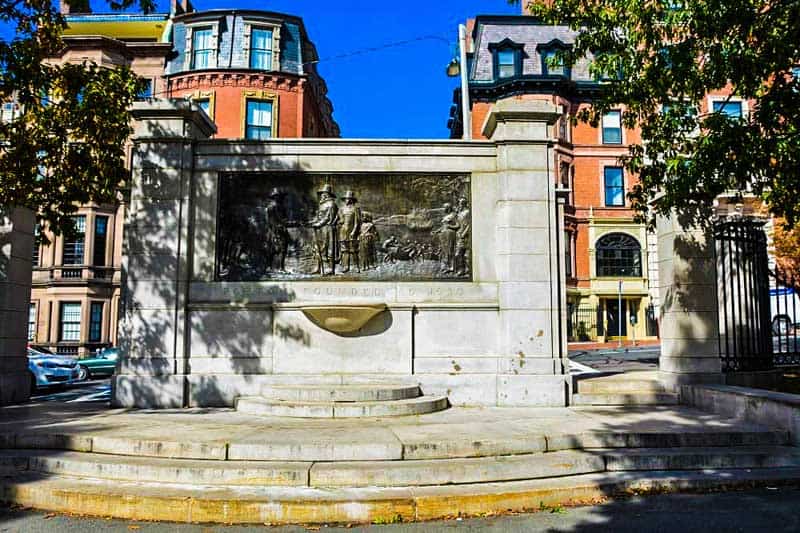 The park is in the shape of a pentagon and covers 48 acres. Filled with statues, trees–including some beautiful early fall foliage–food carts (I can recommend the hot dogs, which is more than I can say for the hot dogs we bought in New York from a food cart), and hundreds of people, it’s a quiet place surrounded by everything from modern glass towers to angular brick buildings hundreds of years old.

By the way, the subway stop to get off in the Boston Common is Park Street, just in case you’re planning a trip.

Hop On, Hop Off Bus Tour

Driving our own car around a new city isn’t for us–instead, we take whatever double decker bus tour is available. In Boston, we had various options, so we picked one that was combined with the amphibious vehicle–Duck Tour–that drives right into the Boston Harbor. 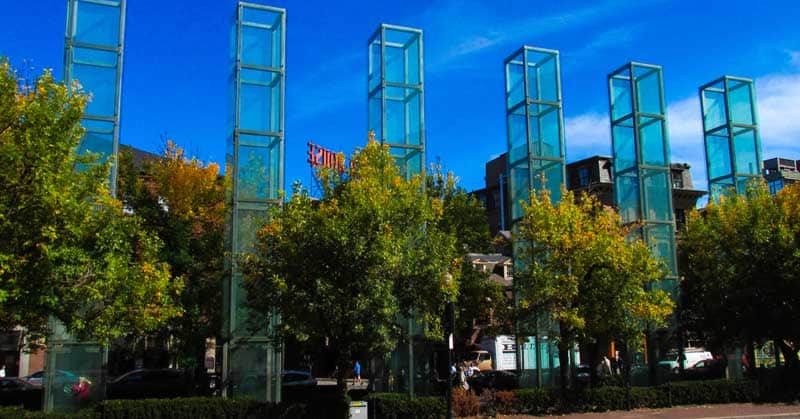 It does pay to check the Web before you buy, though, as some of the tour companies offer free second days, which was the deal we took. We’ve also discovered that the online price may be lower than the bus’s hop on price.

The upper deck of the bus was where the historic aspects of the city really stood out, especially as we got a bird’s eye view from the trolley to plan our stops. Our favorites?

Everybody has to eat, right? And if you have just one meal in Boston, it has to be at Cheers. 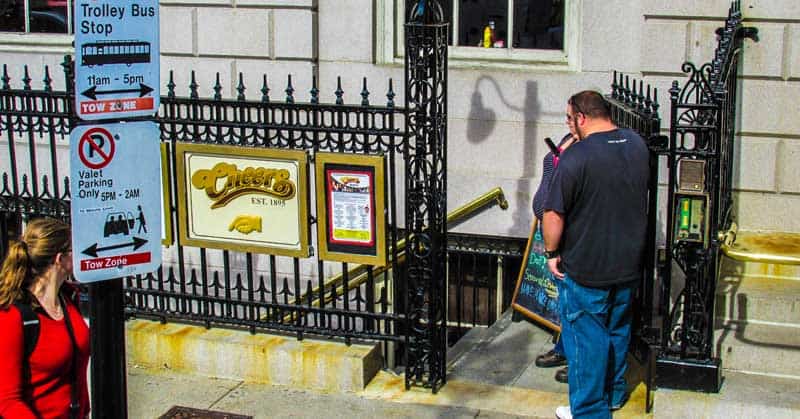 We’ve watched all 275 episodes of Cheers, right through its 11 seasons from 1982 to 1993. The fact is that finding interesting little bars, pubs, and taverns–it doesn’t matter what name they go by–is one of our favorite activities when we travel. There’s something “real” about the atmosphere in a pub or bar that you just don’t get walking through local museums, no matter how well done they are.

And Cheers, well, we all know the television show was filmed on a set somewhere else, but the real stories took place once you walked down those stairs to the lower level of the centuries old brownstone brick building on Beacon Street, originally called the Bull & Finch Pub.

We even got the local lore from our trolley tour driver who pointed out such things as the old post office where Cliff worked, and Fenway Park where Sam and Coach put in their glory years. He told us about the writer who’d sat in the bar working on a script to pitch–and how the script had changed over the weeks to turn the real Bull and Finch Pub into the world we came to know as Cheers. 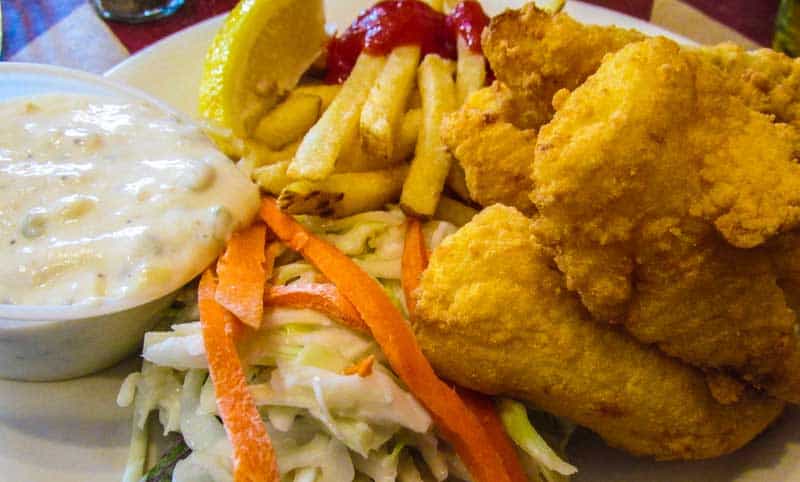 Fish and chips at Cheers, in Boston.

As well as being a bar, the real Cheers also serves food. I loved the menu! Each of the cast members has a “section” from Ma Clavin’s soups to Woody’s Garden Greens to Diane’s entrees, which included our choice–Rebecca’s Fish & Chips.

Service was extremely fast and efficient–I don’t think we waited more than 15 minutes for our meal to arrive. The food was tasty, and not, as we’d expected in a city that we’d already found to be pretty pricey, overly expensive.

We’ll be the first, though, to admit the bright sunshine pouring in the windows on the main floor (the lower level was packed) while we ate kind of detracted from the feeling that we were sitting at Cheers. However, it was still well worth the visit just to soak up a little of the Boston atmosphere that inspired one of our favorite television series. 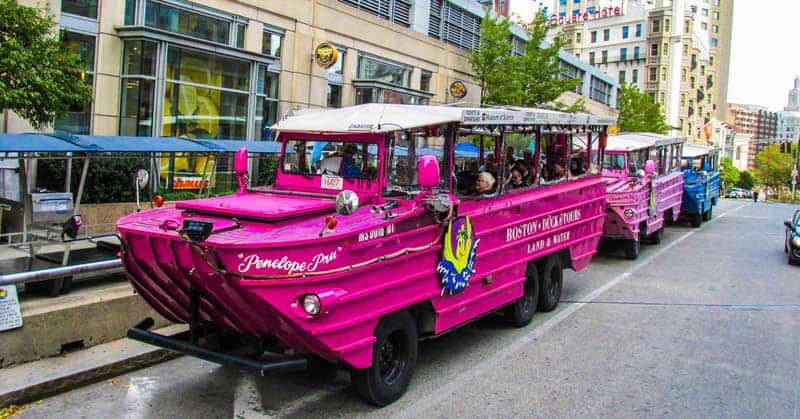 What’s Boston Harbor most well known for? The Boston tea party of course!

That day–December 16, 1773– more than 100 colonists dumped 90,000 pounds of tea into the Massachusetts Bay. It took them nearly three hours to finish the splash.

However, these days it’s the duck boat amphibious vehicles making splash in Boston’s harbor. In fact, the duck boat tour was one of our favorite parts of our visit, giving us a bird’s eye view of such landmarks as: the Old North Church, Bunker Hill Monument, and of course, the USS Constitution (Old Ironsides). 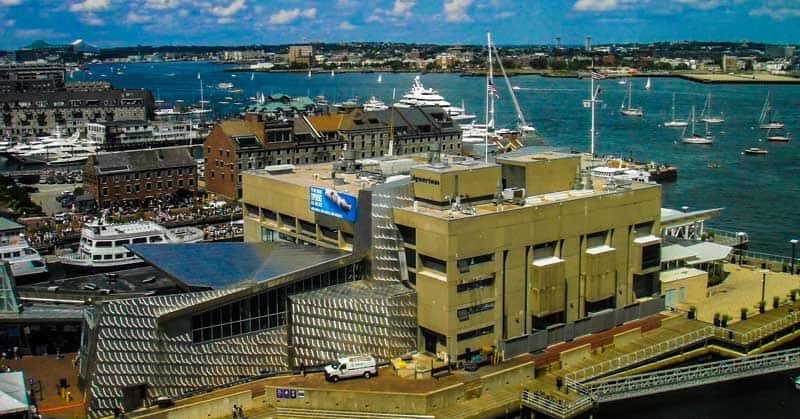 The New England Aquarium opened in 1969, marking its 50th birthday in 2019. But it wasn’t the first, as you might expect–indeed, the first, the Boston Aquarial Gardens, opened way back in 1860.

Our favorite part? The giant, and I mean, really giant, ocean tank with 200,000 gallons of water and 1000+ animals, that’s the Aquarium’s centerpiece. In fact, the tank is so large engineers built it first, then created the rest of the Aquarium around it!

And of course, who wouldn’t love Octavia, a giant octopus from British Columbia. A true diva, she can change her color and texture to make sure she fits in with her surroundings. Now, that’s a skill I could use.

But whether you visit Boston for its history, waterfront, or culture, you’re sure to enjoy your stay!

More Things to Do in Massachusetts

The witches of Salem may have been hanged on Gallows Hill more than 320 years ago, but their story draws many of us to Salem, Massachusetts every year. In fact, more than a million people visit this city annually to learn a little more about its history....
Read More

Boston, MA, is one of the most historic cities in the US. While it’s great to visit Boston all year round, find out why spring time is especially popular with events such as the Boston Marathon, Duckling Day Parade, and Fenway Park ball games.

The photo in the header was taken by Linda Aksomitis, in Boston, Massachusetts, USA. The main building is the Boston Public Library, built in 1852, which has the saying, Built by the People and Dedicated to the Advancement of Learning, carved into the walls just below the roof line. The next building is the Old South Church, completed in 1873. 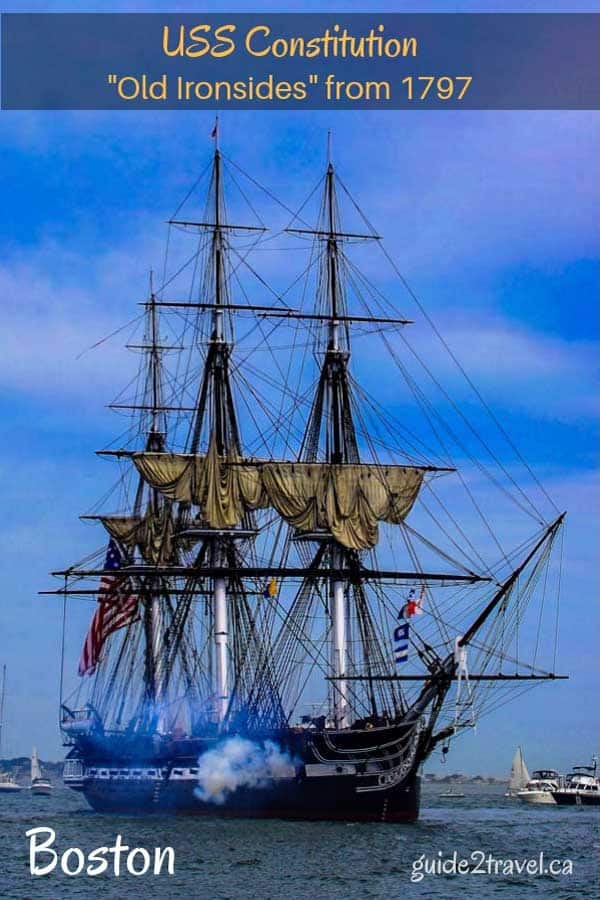 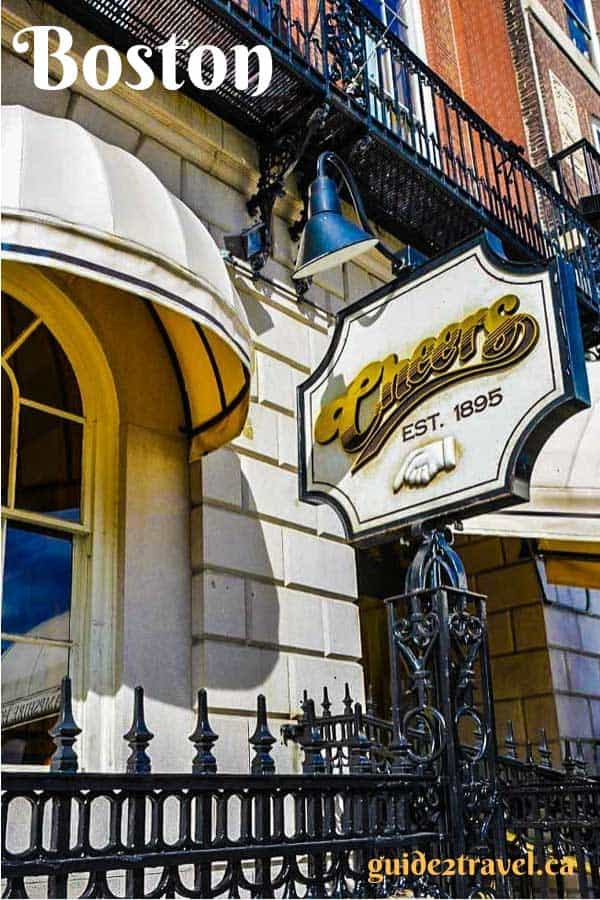 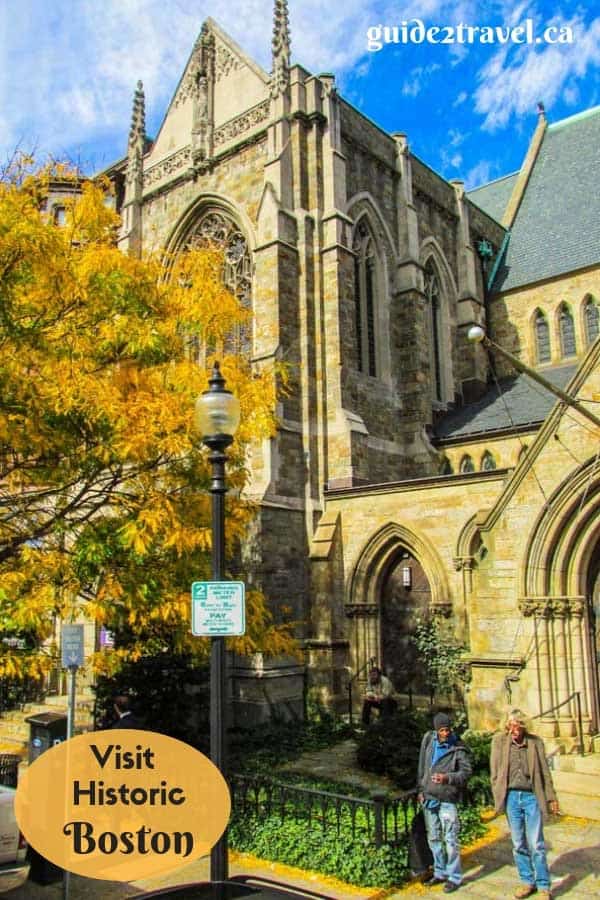