Seven bridges are all that separate visitors from the modern cityscape of Stockholm, and medieval Gamla Stan, or Stockholm Old Town. Completely surrounded by water, Old Town covers the island of Stadsholmen, along with the smaller islands of Riddarholmen, Helgeandsholmen, and Strömsborg.

Of course, all that water was important for protection during the Medieval period when Stockholm was established. In fact, according to legend the city was established when the existing capital, Sigtuna, faced continuous attacks. And how did they pick the new location? By filling a log of wood with gold and letting it float until it landed!

The Royal Palace in Old Town 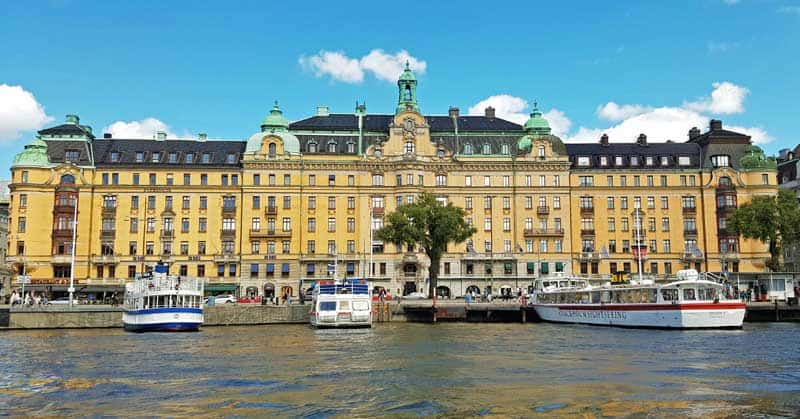 Getting to Old Town is easy when you visit Stockholm. In addition to the four islands that make up Gamla Stan, the central part of Stockholm contains another ten islands, so taking the hop-on hop-off boats gets you right to the main gate. We also stopped a second time from the hop-on hop-off bus, so either works well.

As you can see in the photo above, the boats dock right in front of the Royal Palace. The palace, one of the largest in Europe, is enormous with over 600 rooms! Still very much in use, it’s the official residence of His Majesty, the King of Sweden. Interestingly, the west half of the Royal Palace was built as the King’s side and the east half as the Queen’s side.

Originally, the Swedish King had a castle, Tre Kronor, in Old Town. However, it burnt in 1697, and was replaced with the current Italian Baroque style palace in the 1700s. If you take the full palace tour (fairly expensive but included in the Stockholm Pass) you’ll see such things as the Hall of State, Queen Kristina’s amazing silver throne from 1650, the royal costumes and armor in the armory, along with coaches from the Royal Stable.

As a former librarian, I must say my favorite was the Bernadotte library with its 100,000+ books. Named for the current royal house of Sweden, the Beradotte Dynasty, it contains the royal book collection along with numerous framed portraits. 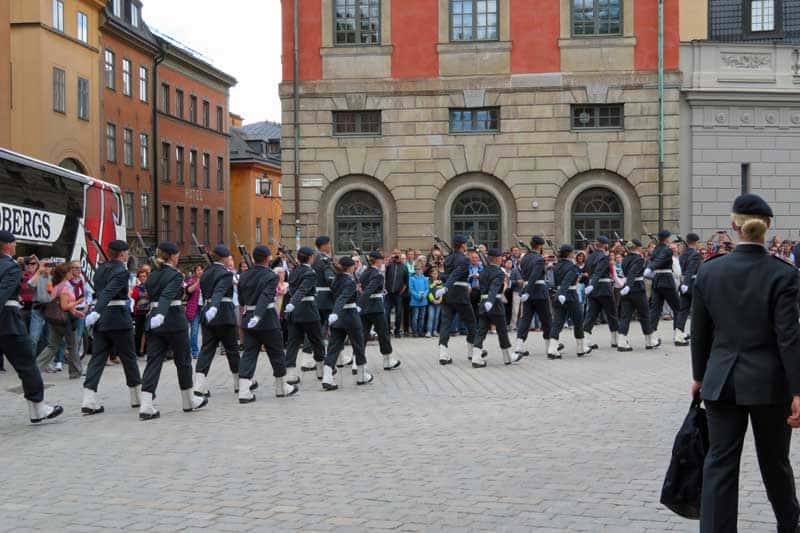 Once we finished touring the castle, we got caught up in the military marching band parade that happens every day for the changing of the guard. Luckily for us (so much for planning) it turned out that particular parade was one of the main summer events celebrating The Crown Princess’s birthday, held annually on July 14!

So, we were truly pulled along by the massive crowd as we wound our way through the cobblestone streets. The daily march goes year-round, leaving from the Army Museum or Cavalry Barracks and takes 20 – 30 minutes to reach its final destination at the palace. 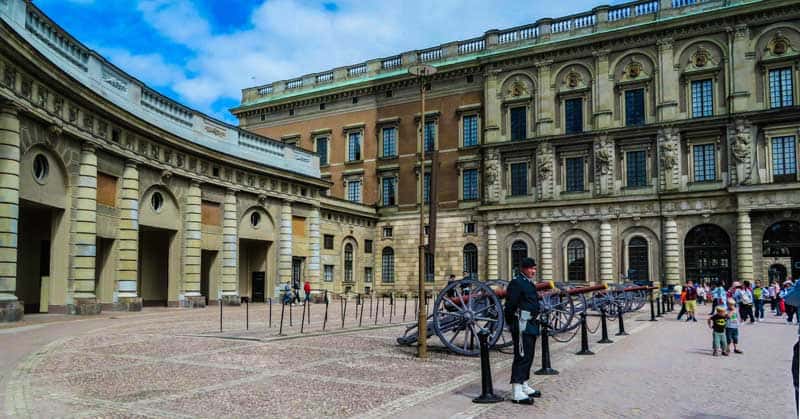 Changing of the guard in the outer courtyard at the Royal Palace in Stockholm.

Once there, the guard and spectators gather in the palace’s west side outer courtyard for the daily changing of the guards ceremony at about 12:15 on weekdays and at 1:15 on Sundays. 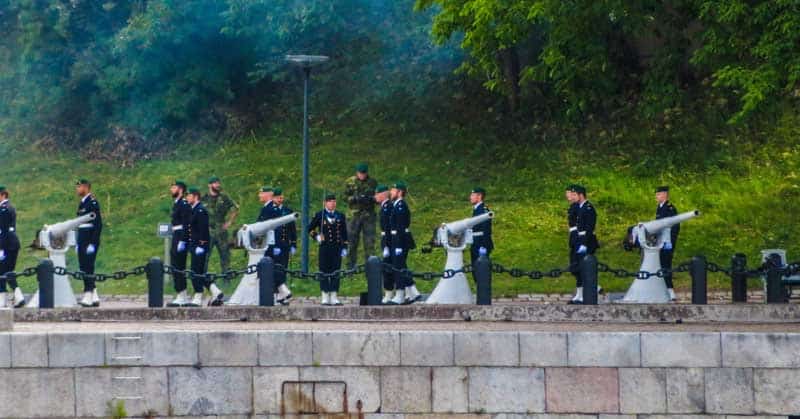 And, since we were lucky enough to be in Stockholm for the Crown Princess’s birthday, we also got to see the 21-gun salute. That was very cool, as there are only six official salute days each year!

The Swedish Parliament, the Riksdaghuset

We found the gates to the Riksdagshuset the most impressive in Old Town. While at one point, vehicle traffic could use the Stallbron, it was closed to all but foot traffic in 1979. It seemed fitting that such ornate architecture would be associated with the Parliament. 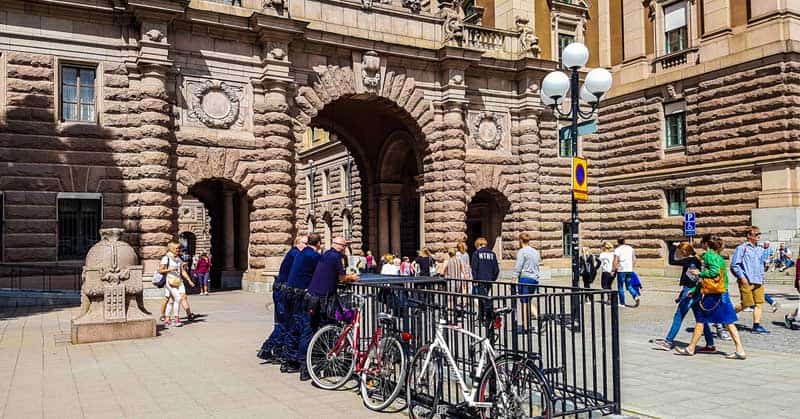 “Entrance Gate at the Stallbron bridge, which stands on the location of likely the oldest bridge in Stockholm”

The Swedish Parliament, the Riksdaghuset, building itself was completed in 1905 — which is, strangely enough — the same year that Saskatchewan (where I live) became a province. Parliament was moved to a larger premise while renovations were done at the end of the ’70s, and moved back to the island of Helgeandsholmen on October 4, 1983.

Helgeandsholmen island is connected by the 44 metre bridge, “The National Bridge,” also called “The State Bridge,” to Drottninggatan. This arch bridge over Lake Malaren was inaugurated in 1931, with a sluice gate regulating the water level later added under the bridge.

While we didn’t have time to go through the Parliament, it’s open to the public all year round on weekends, and on weekdays through the summer.

More to See in Old Town 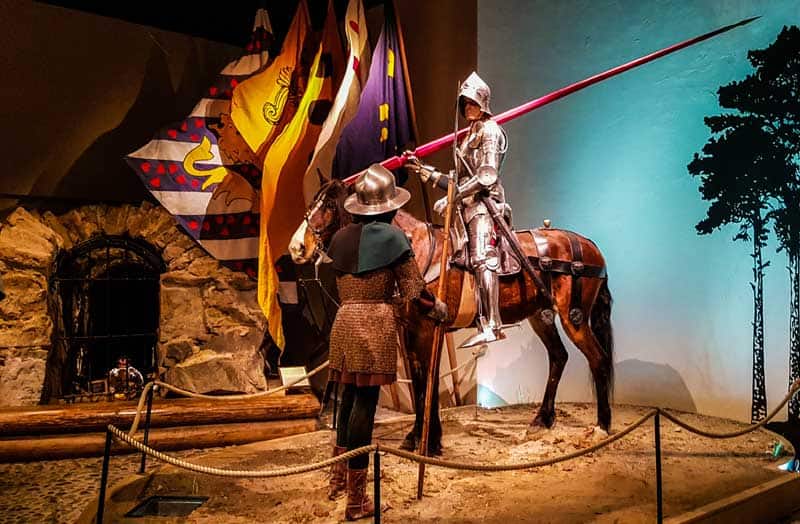 The Medieval Museum in Stockholm.

Stockholm has over a dozen free museums, two of them in Old Town: The Royal Armoury and the Medieval Museum. The only one we visited was the Medieval Museum, which we loved. We found it quite by accident at the entrance to Norrbro, Stockholm’s oldest stone bridge. I’ve always been fascinated with knights in armor, so it was fun to go through a whole museum dedicated to life during this era.

You’ll also find the Royal Cathedral of Sweden, the Storkyrkan, an interesting stop. It’s the oldest church in Gamla Stan, having been rebuilt in the 14th century after a fire destroyed the initial structure. Riddarholmen Church, the royal burial church built as a Franciscan monastery for the so-called Grey Brother monks in the thirteenth century, is another fascinating stop.

And if you’re looking for some shopping and souvenirs, you’ll find Stortorget, the oldest square in Stockholm, right in the middle of Old Town. I’d love to visit during its annual Christmas market in December with its traditional handicrafts and food. 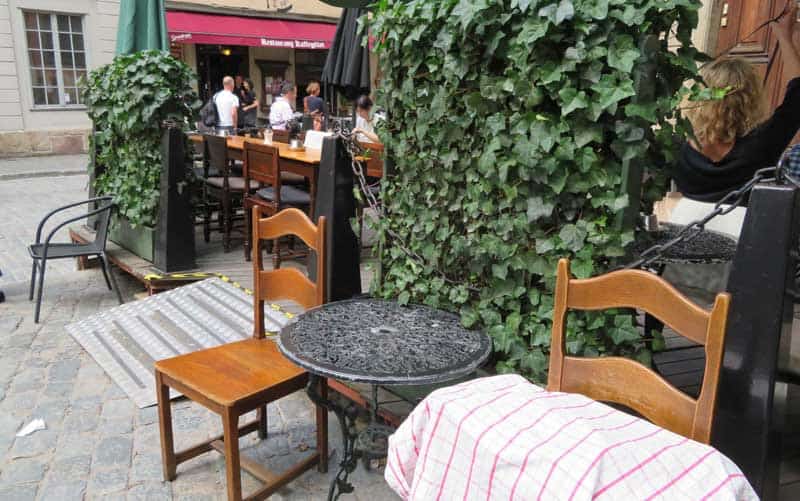 When lunch time rolled around, we decided to try out one of the many bistros in Old Town. Indeed, the area has become quite a hot spot for culinary geeks and I could see why.

Our choice? Restaurang Kaffegillet, which was near the palace. The glass of local draft beer was the perfect starter after all the walking we’d been doing.

Just as local beers are part of our cultural exploration, so is the food. When David saw reindeer on the menu, he had to try it! Cured and spiced, it was quite tasty although we would have enjoyed trying it in a dish with more of a natural flavor. However, we didn’t find it on a menu again in the rest of our Stockholm travels. 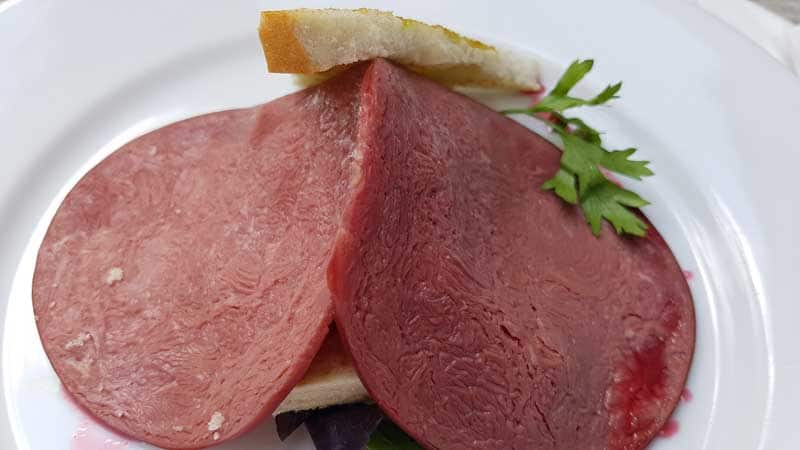 Take a video tour of Old Town with Rick Steves.

The photo in the header above, of The Parliament Bridge (Riksbron)and Swedish Parliament, the Riksdagen, in Gamla Stan, or Stockholm Old Town, was taken by Linda Aksomitis in Stockholm, Sweden. 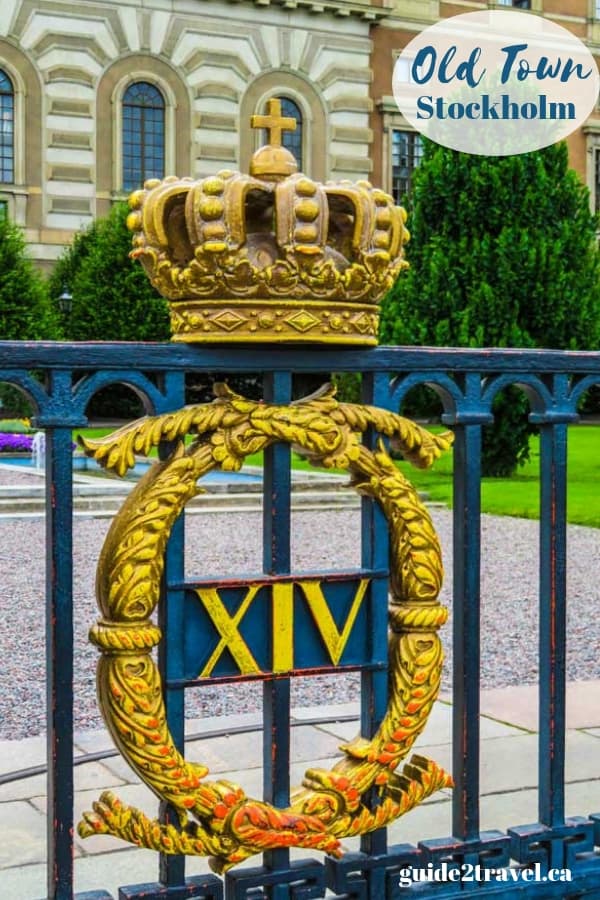 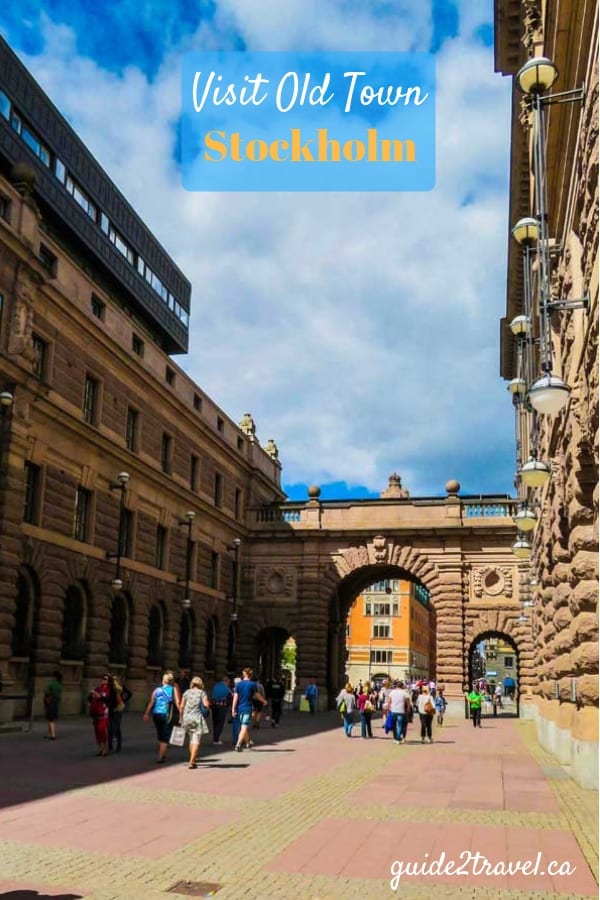 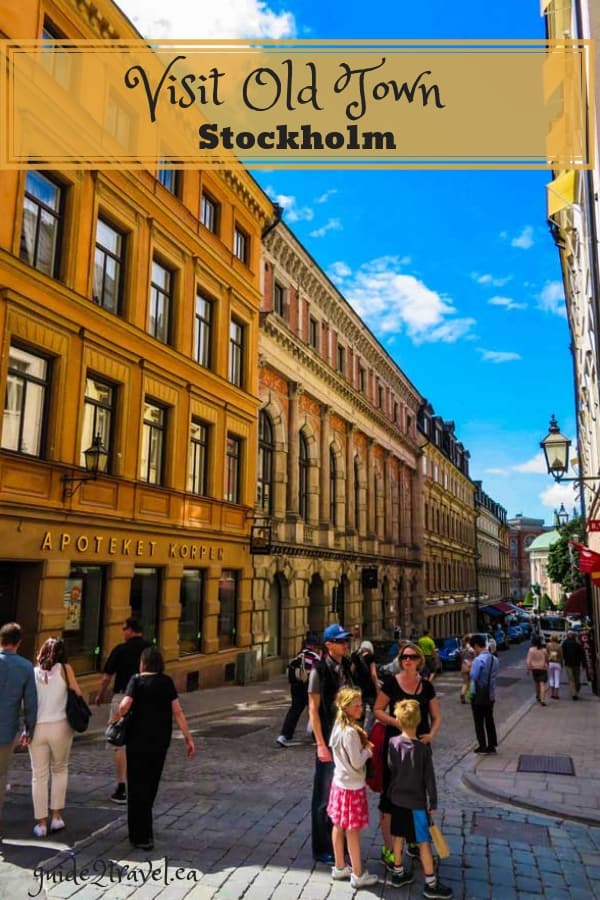