Travel adventures with a twist of history! Latest ArticlesEurope Trips
;

If you’re planning a special weekend getaway, you should consider visiting Prague. With a rich history, interesting culture, fascinating architecture and art scene, amazing views, tasty beers and great parties, the beautiful capital of the Czech Republic is paradise for all kinds of travellers. And that’s not all. The prices are as friendly as the locals. So, don’t feel shocked if the city of Prague is always packed with travellers.

But though there are always visitors, this charming city won’t make you feel claustrophobic like other European capitals. And if you want to avoid the crowds, you can always run away from the city centre, and visit a castle or rest in a park. If you’re almost convinced, but you don’t know what the best things are to do on a weekend getaway in Prague, continue reading this article. 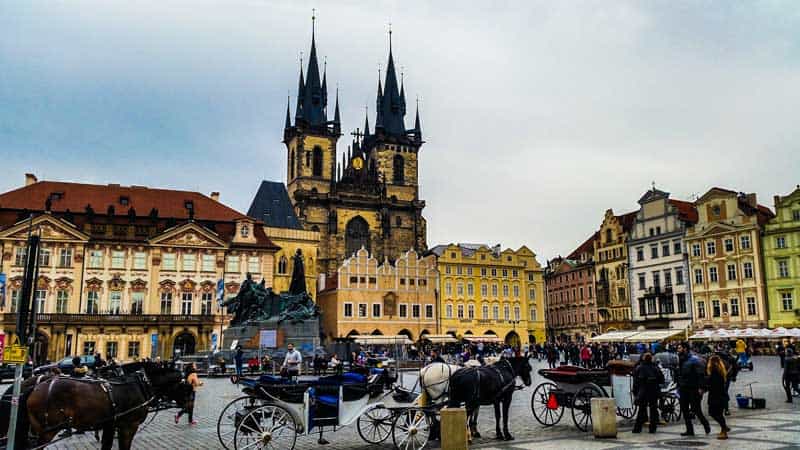 Prague Old Town Square was founded in the 10th century, with the City Hall built in the 14th century.

The city is an outdoor museum, especially for architecture enthusiasts who can spend their whole Prague weekend getaway exploring the city on foot and admiring the medieval and historic building, created in a multitude of styles. But the most famous spot is still the Old Town Square.

This centre of the city is not only an important place for travellers, but also for locals, who use it as their gathering place. The square is surrounded by restaurants, cafes, as well as impressive pieces of architecture, and it is always full of street artists and performers. The Old Town Square is definitely the perfect starting point for your weekend getaway. 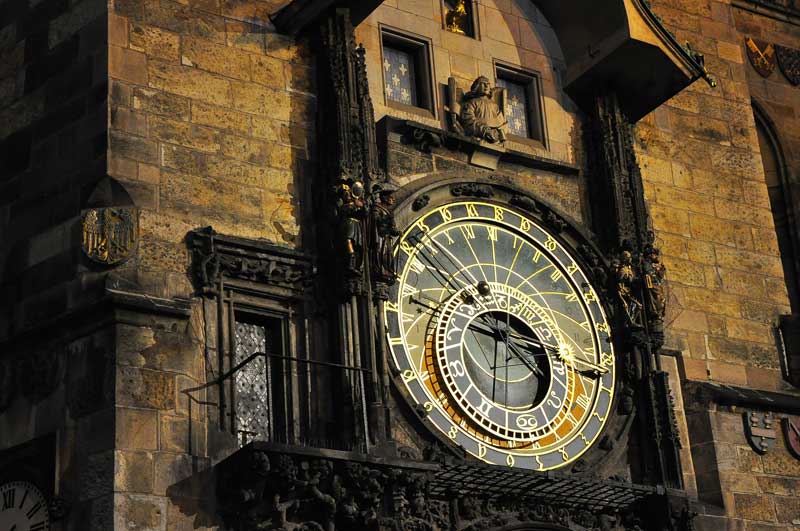 The astronomical clock in Prague was installed in 1410 and is the oldest one still operating.

Wander around the city, and when you get to the south side of the Old Town Hall, stop and admire the world’s oldest functional astronomical clock.

Though it’s considered the second most overrated European tourist attraction, after the Mona Lisa, the medieval Astronomical clock is amazing. So, don’t miss catching a glimpse of the procession of Apostles and the moving statues, and taking a few photos before continuing your Prague adventure. 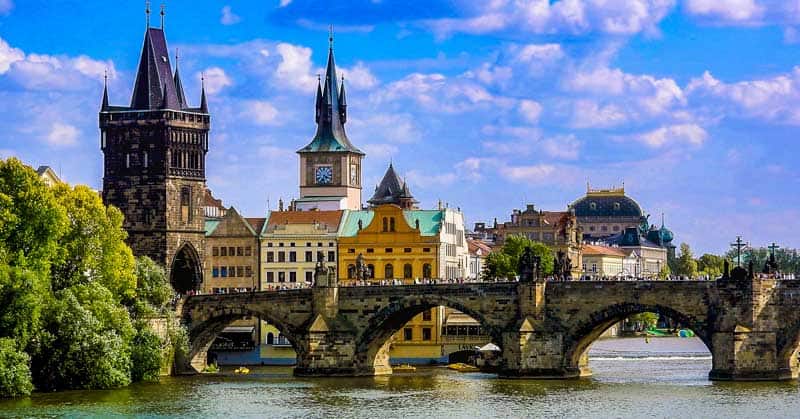 Charles Bridge, which was originally known as the Stone Bridge, is the oldest bridge (built in 1357) still standing over the Vltava river.

All cities have their own symbol, but, as you will see, Prague has more than one. Charles Bridge is definitely one of them, and crossing it will be a delight, even if romance is not your cup of tea. 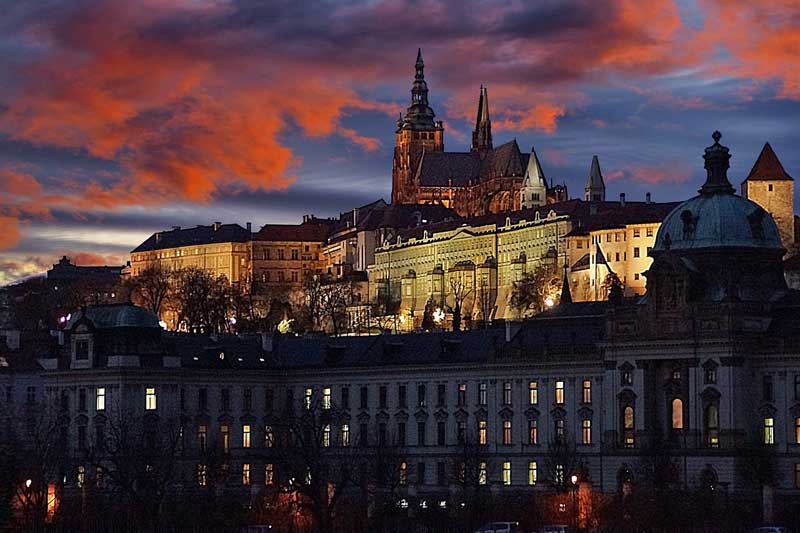 Prague Castle covers 7 hectares (18 acres) in Prague. Construction started on the castle in 870.

Prague Castle is another symbol of the beautiful city you’ll have to see on your Prague weekend getaway. The fascinating fortress is located on top of a hill, overlooking the city and offering visitors and locals the chance to admire memorable landscapes.

So, put on your comfortable shoes and go up to Prague Castle, the largest coherent castle complex in the world, according to Guinness Book of World Records. The complex is also hosting the well-known St. Vitus Cathedral. Admire its stained-glass windows and then take a moment to enjoy the view.

5. Wander Around the Beautiful Wallenstein Garden

After you’ve visited the castle, you should get closer to Prague’s beautiful parks. Wander around the lovely Wallenstein Garden, which might not be the most serene part of the city, but it is a must-see Baroque masterpiece.

So, relax, explore the gardens, admire the views of the Castle, check out Wallenstein Palace and say hello to the friendly white peacocks.

6. Travel Back in Time while Strolling the Streets of Mala Strana

The walk down the hill from Prague Castle will take you directly to one of travellers’ favourite spots in Prague, the charming Mala Strana neighbourhood, which was founded in 1257. Stroll the beautifully arranged cobblestoned streets while admiring the centuries-old buildings.

This walk will fill your heart and take you back in time, as well as give great material for your Instagram. Just don’t stay only on the main street of the neighbourhood. Be adventurous and get lost on the side streets of Mala Strana. You won’t regret this adventure. 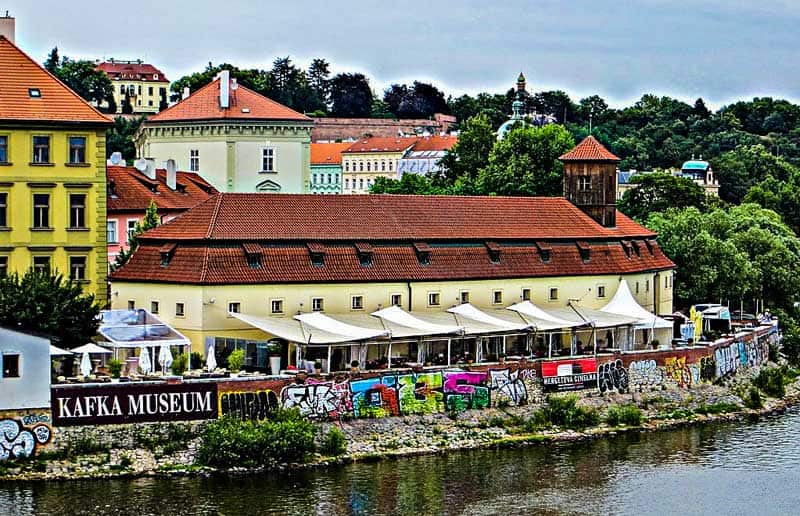 Franz Kafka is one of Prague’s most celebrates sons, so expect to see a lot of him in the city. But don’t just catch a glimpse of the Kafka mugs and T-shirts! Whether you are passionate about literature or not, visiting the Franz Kafka Museum and taking a photo with the statue in front, known as the Piss Sculpture, are must-dos when in Prague.

Explore the museum and its permanent exhibition, called The City of K. Franz Kafka and Prague, and find out more about the famous author’s life and works. Then, stop at the statue, and take a funny photo with the two men “peeing” into a small pool shaped like the Czech Republic. 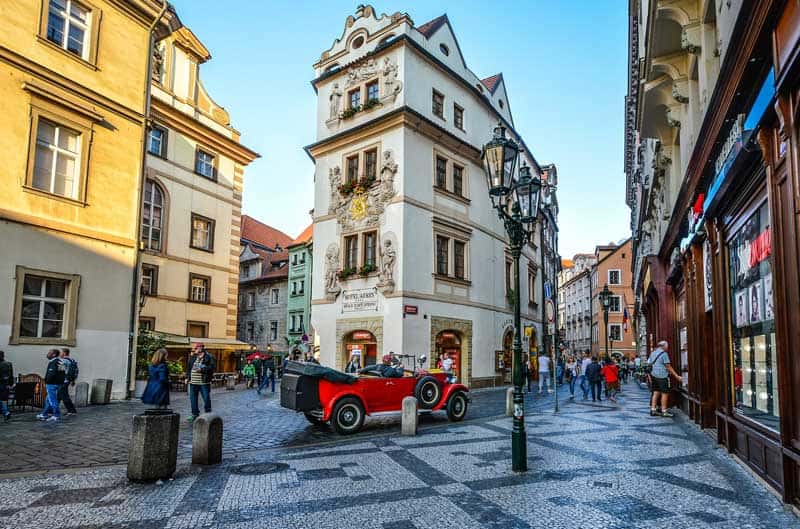 Find lots of historic spots to sit back and enjoy a beer in Prague. Note that beer in Prague may be labelled in degrees (measure of sugar before fermentation) rather than alcohol percentage. MOST of the time, 8° equals about 3.5% alcohol, and 13° at about 5.7%.

If you like beer, you are in the right place, because the Czech Republic is the home of Pilsner. Also, it’s the country with the highest beer consumption per capita, and of course the capital of beer. So, there are plenty of places to drink tasty beer in Prague. But Pilsner is not all you get in Prague.

There are many bars and pubs where you can indulge in the most delicious craft beers from the best breweries in the countries. And if you also want to learn about it, why not visit the Prague Beer Museum? 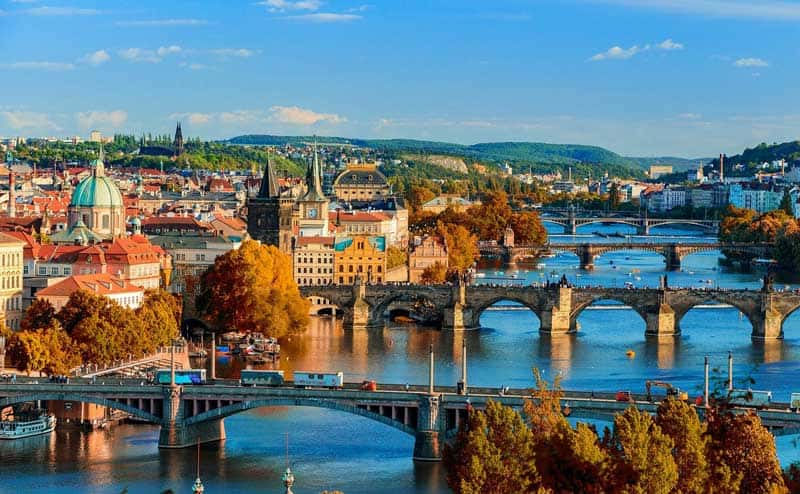 Prague has more than 300 bridges, many of them over the River Vltava.

As mentioned before, Prague is one of those European cities that has something for every kind of travellers. So, romantic people can admire the medieval parts of the city, but also relax in charming parks and admire spectacular views.

If you want to share a special moment with somebody, go to Letna Park, where you can watch the unique views of the River Vltava and all the bridges that cross it. Alternately, you can also go for a cruise.

10. Party with the Friendly Locals 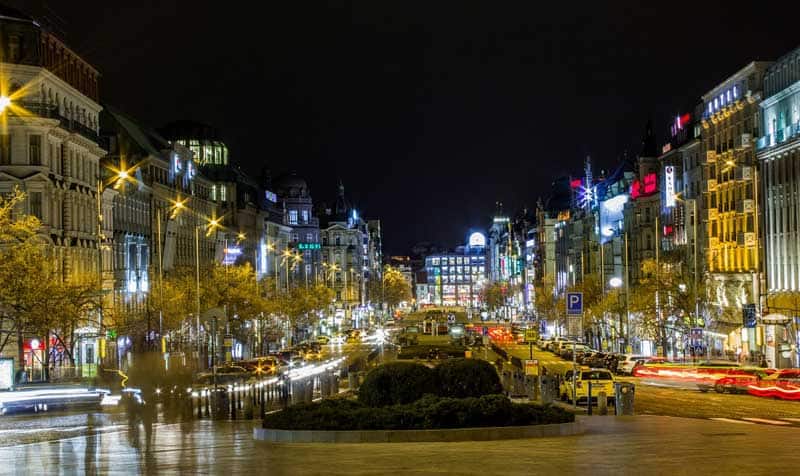 Wenceslas Square is the centre for business and culture in the New Town part of Prague.

Your days in Prague will be filled with art, architecture, history, and amazing landscapes. And if you want to have amazing nights during your Prague weekend getaway, the city is perfect for you. Prague might be famous for hosting great jazz and classical music events, but there are also other live music gigs you can check out. And the clubbing scene is great, offering party animals the chance to dance on every type of music and attend all kinds of events. The city promises long nights that will always be remembered!

Rebecca Brown is a translator by day, and a traveler mostly at night. She is an expert on living with jet lag – and packing in tiny suitcases. You can read more of her exploits at RoughDraft

Here are some great reasons to visit Stonehenge in England, a UNESCO Heritage site. Now, you can also visit the nearby largest prehistoric site in England!

Check out this roundup of 10 of Hungary’s most popular historic sites for visitors, from castles to cathedrals to the Danube River and Buda Hills.

The photo in the header was taken in Prague, Czech Republic.

Rebecca Brown is a translator by day, and a traveler mostly at night. She’s an expert on living with jet lag – and packing in tiny suitcases. You can read more of her exploits at RoughDraft 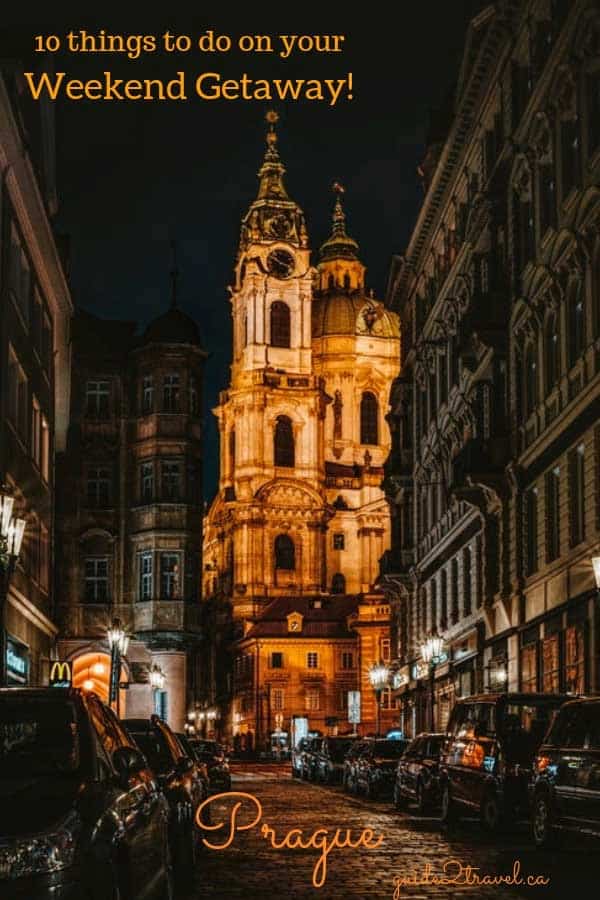 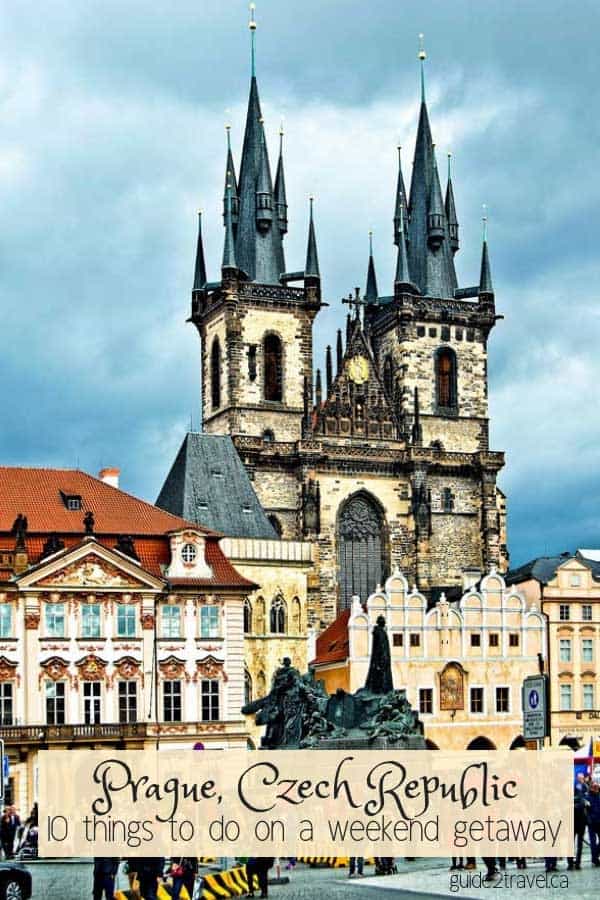 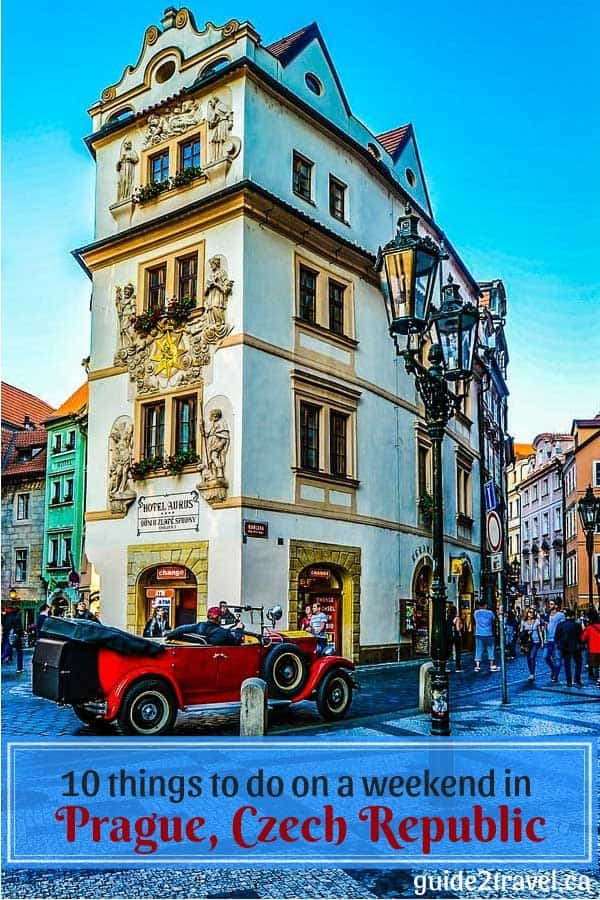