Find Adventure on the Missouri River on a Riverboat

...travel adventures with a twist of history! Latest ArticlesAdventures
;

The Missouri River holds an important spot in the history of the American West. Indeed, it was the jumping off point for all of the major trails that hundreds of thousands of people followed west, including the Oregon Trail and Mormon Trail. Even the Pony Express started on its banks at St. Joseph, Missouri.

And riverboats? Well, during the mid to late-1800s they connected the American West with both the eastern and southern parts of the country. So, not only goods, but also people, relied on them for transportation.

Visitors can relive at least a little of that adventure these days by cruising down the Missouri River on the Lewis & Clark Riverboat, docked at the Heritage River Landing in Bismarck, North Dakota. 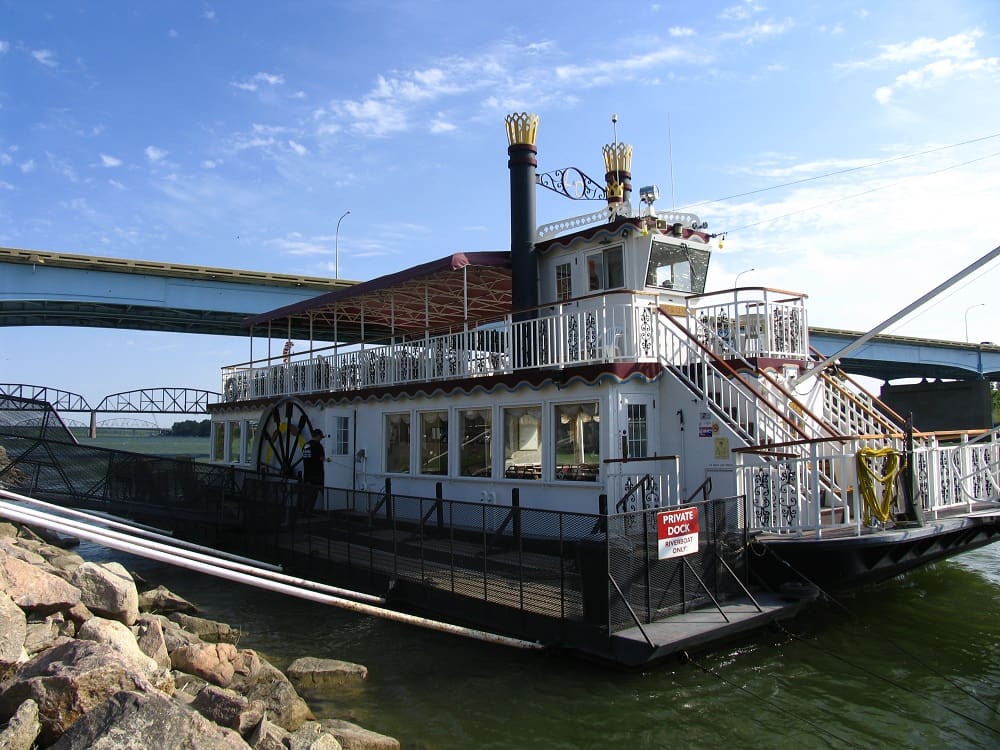 Our journey on the Lewis & Clark lasted an hour, although there are also half hour longer evening and sunset tours for those who want to experience the warm orange glow of sunset on the water. We booked our tour in advance to make sure we’d have a seat when we arrived. Tickets can also be purchased just prior to departure, as the ship holds 150 passengers.

The riverboat docks inside Bismarck’s Sertoma Park, a three-mile wide stretch of plain beside the Missouri. Our prepaid tickets were waiting for us, along with instructions to quickly make our way to the boarding area, as the ship was ready to leave!

Even though it was a hot day, we decided to stay on deck instead of in the air-conditioned luxury of the lower level. I love the wind in my face, particularly when it carries the cool touch of river water with it, and Jon soon discovered he did too. Jon’s great-grandma was only a chair away, shaded by the canopy, so we were able to visit while we sipped cold drinks and listened to the captain’s narration.

Lewis & Clark on the Missouri River 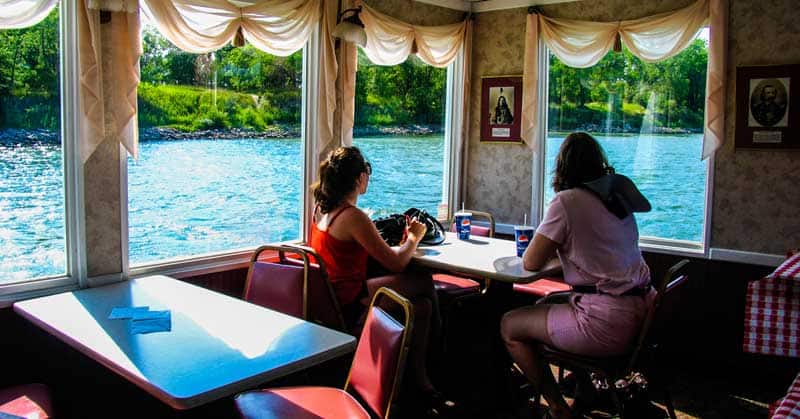 Travelers relaxing below deck in the comfortable dining room on the Lewis & Clark Riverboat.

I always find the best tours have good storytellers. It turned out that our riverboat captain fell into that category. Indeed, he turned back the centuries as he told about the early people who had traveled the river, some by riverboat and many more by dugout canoes.

Lewis and Clark, the legendary explorers for whom the riverboat was named, spent from 1804 to 1806 paddling the Missouri and its many tributaries. We heard stories about them, as well as Sakakawea, their Shoshone guide, and Sitting Bull’s famous defeat of General Custer.

There was lots to watch as the ship leisurely floated down the Missouri: fishermen and boaters, cabins and cottages, and all kinds of summer fun lovers, like the group of young people waving at us from their tire tubes. And then, once we turned around, we watched the steel railroad bridge that spanned the Missouri come closer as we neared the historic port of Bismarck.

Story of the Lewis & Clark Riverboat 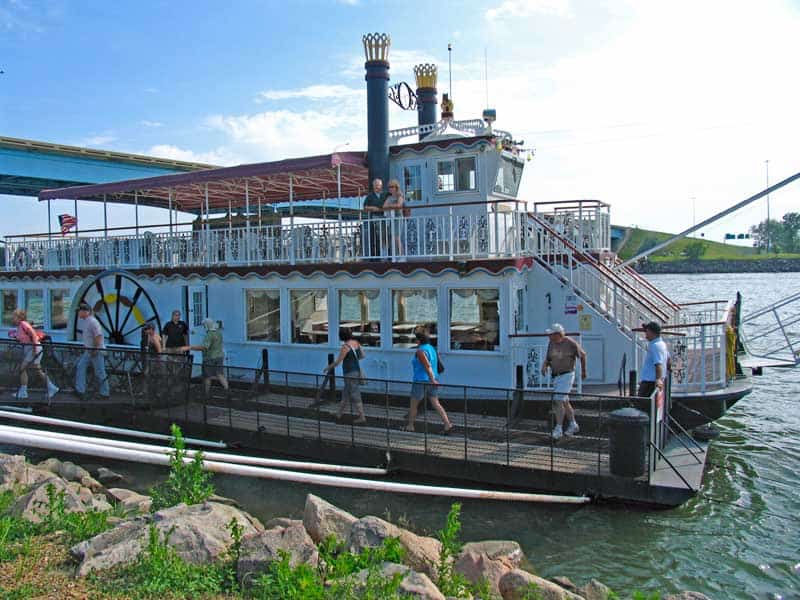 So what brought the Lewis & Clark Riverboat back to navigate the Missouri River today? A mission to preserve the nation’s rich heritage and recognize the importance of the riverboat to its history.

The Missouri Riverboat, Inc. company has been operating the Lewis & Clark Riverboat on the upper Missouri for several decades. Originally privately owned, the company is now operated by the publicly funded Fort Abraham Lincoln Foundation, which supports heritage tourism in and around the Bismarck area.

A 40 foot, flat bottom steel hull riverboat, the Lewis & Clark was manufactured as a replica riverboat in Lacrosse, Wisconsin, in 1990. Unlike the original riverboats, two Cummins diesel engines provide the power for the Lewis & Clark’s journeys up and down the Missouri. 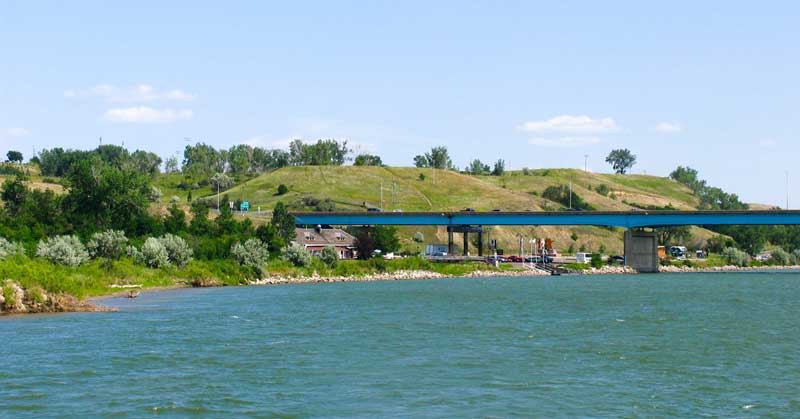 Taking the riverboat down the Missouri River in North Dakota.

Bismarck sits at what was known for centuries as the narrowest and least dangerous crossing of the mighty Missouri—which serves as the natural divider between the twin cities of Bismarck and Mandan.

Until channels cut off some 72 miles over the years, the Missouri was the longest river in the United States. Now, it’s comparable in length to the Mississippi River, which it joins just north of St. Louis, Missouri. Covering over 2300 miles, the Missouri drains one-sixth of continental U.S.

The headwaters of the Missouri rise in the Rocky Mountains near the town of Three Waters, Montana, at Missouri Headwaters State Park. The park is at an elevation of 4045 feet, although the furthest point of the Missouri is higher yet at Brower’s Spring, at the elevation of 8800 feet! Swirling and bubbling down mountains, cutting through gorges and canyons, the Missouri isn’t navigable until near Great Falls, Montana.

Early European explorers, Jolliet and Marquette, were the first to encounter the Missouri in 1673, where it roared into the Mississippi, saying they’d “never seen anything more terrific.” It wasn’t until 1713 that Étienne de Veniard, Sieur de Bourgmont, traveled and described its length, so cartographers could create the first map.

Steamships on the Missouri 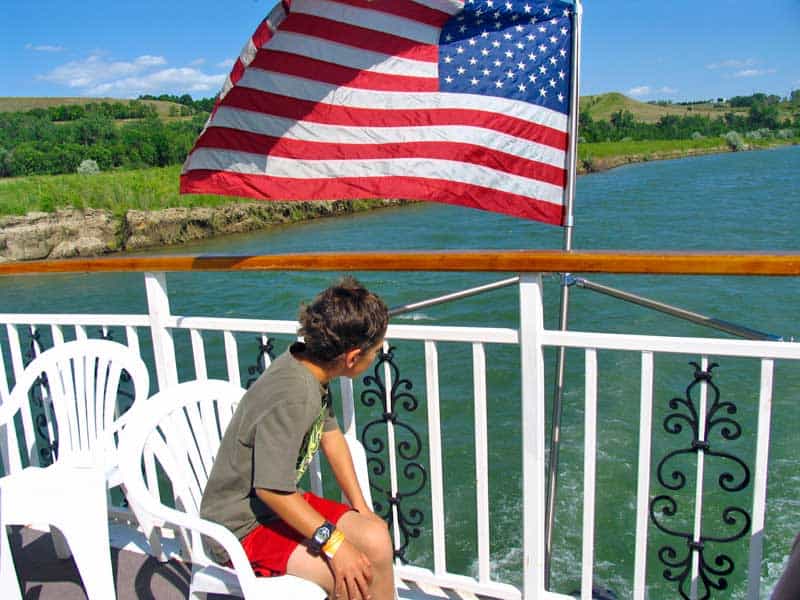 Cruising on the Missouri River.

In 1831 the steamship, Yellowstone, began navigating through the treacherous waters of the upper Missouri as far as the mouth of the Yellowstone River. Artists and writers were some of the first to take steamships. Their mission? To sketch the landscape and describe the people they met along the way.

Captain Joseph LaBarge was perhaps the most famous captain on the upper Missouri. John James Audubon, one of his most well known passengers, rode up river to Fort Union in 1843. Audubon, of course, painted and cataloged North American birds. The National Audubon Society was named for him in 1905.

Steamships continued to travel the Missouri until the early 1900s, transporting goods, people and news, until they were gradually replaced by railroads.

More to See and Do 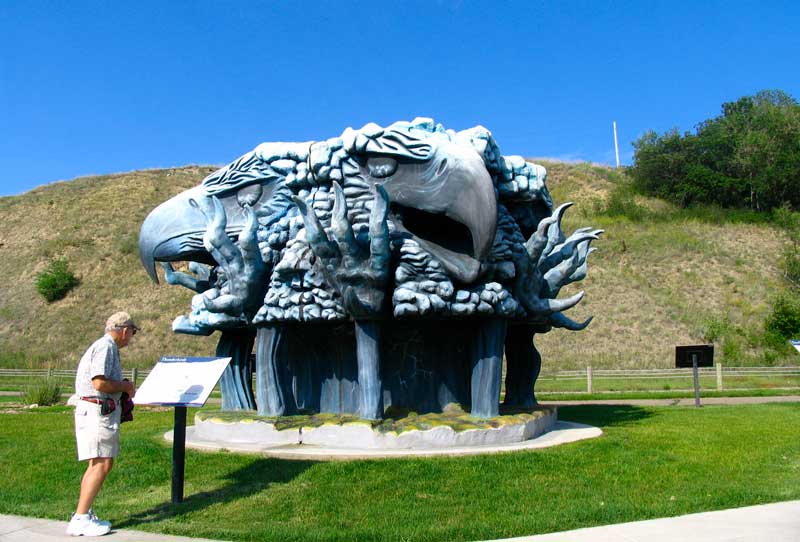 “Thunderbirds” statue – a public art creation by the students of United Tribes Technical College is part of the Missouri Valley Legacy Center in Keelboat Park.

We also found there was no shortage of things to do along the Missouri in Bismarck and Mandan.

First, we explored Sertoma Park and Keelboat Park where we were. Jon, of course, was fascinated with the replica of an early 1800s keelboat like that used by Lewis and Clark.

How had boats so fragile appearing managed to make their way up the churning water of the Missouri in the spring, we wondered?

While we didn’t have time to follow it, the Missouri River trail for hikers and bikers starts nearby at Overlook Park and winds for three miles through the valley.

Boating on the Upper Missouri 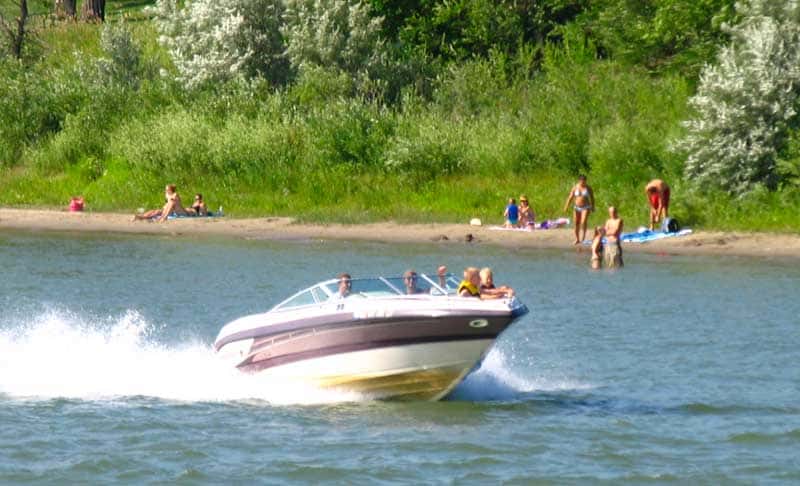 Boating on the Missouri River.

Boaters can navigate up the Missouri River from the Oahe Dam, situated north of Pierre, South Dakota, to the Garrison Dam in Central North Dakota. The Garrison is an earth embankment dam over two miles long, midway between the cities of Bismarck and Minot. Smaller boats are preferred, as there are lots of sandbars on the river.

Well known for its fantastic fishing, this part of the Missouri is best known as a great spot for walleye. Fishing tournaments begin in early May, and continue through the summer. Other popular catches include largemouth and smallmouth bass, as well as northern pike and crappie

Riverboat tours start at the Memorial Day weekend each spring and run until fall.

More Things to do in the Dakotas

Theodore Roosevelt ranched in the Badlands of North Dakota, describing the country in vivid detail in his 1885 book, Hunting Trips of a Ranchman. That was, of course, before he became the 25th Vice President of the United States (1901) or the 26th President...
Read More

Once you've visited the Black Hills of South Dakota the first time, you'll probably put them on your must-visit-again list! With attractions and activities that span the four seasons, there's always something new to do. We live less than 500 miles from the Black...
Read More

Visit the only Bonanza farm National Historic Landmark – Bagg Bonanza Farm – in Mooreton, ND. Then check out the Bonanzaville Museum in Fargo, ND.

The photo in the header above is of the Lewis & Clark Riverboat in Bismarck, North Dakota, USA.

Save one of these pins to read and share the story later! 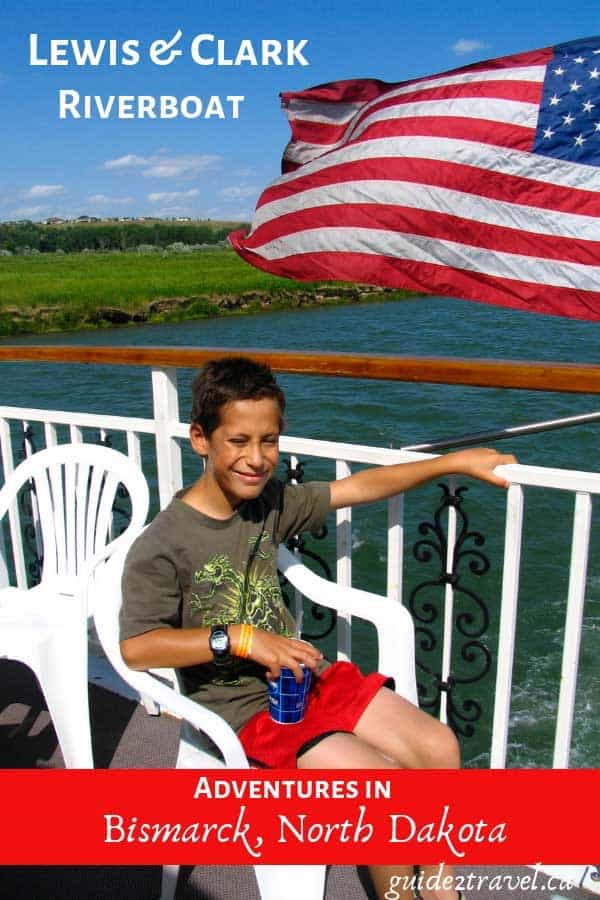 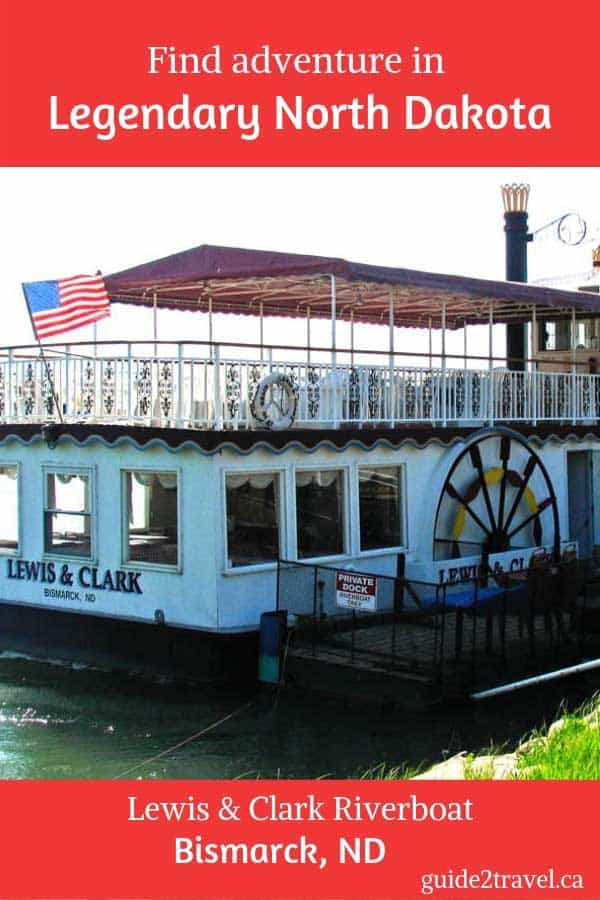 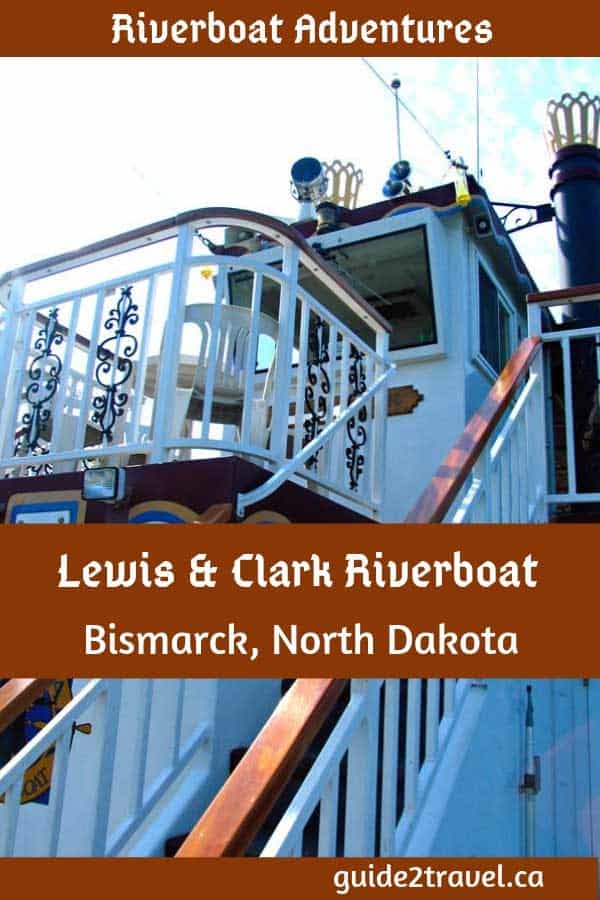