Malaysia is a great place for North Americans to visit for a number of reasons. For English-only speakers, Malaysia came under British rule until 1957, so English is widely understood. In larger centers, you’ll even find lots of English signs. The official langauge is Malay, but in Sarawak and Sabah, English has widespread usage.

However, it’s the rainforest that makes Malaysia incredibly exciting for most visitors. More than 15% of Malaysian forests are primary forest biodiverse habitats. There are 1671 identified species of reptiles, amphibians, mammals, and birds according to the World Conservation Monitoring Centre — of these, nearly 14% don’t exist anywhere else on earth. 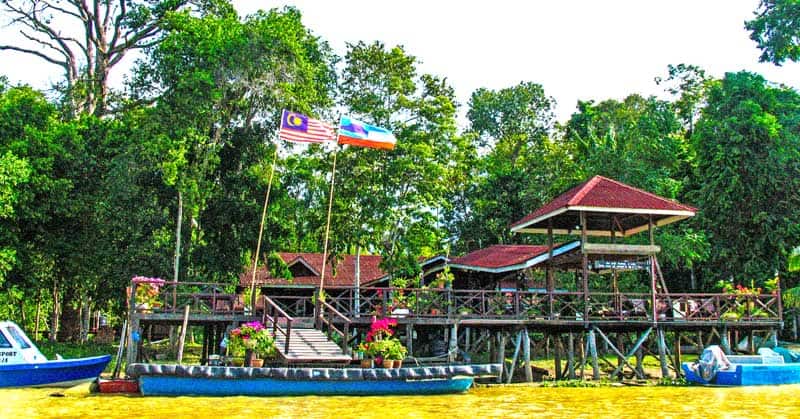 Village in the rainforest.

Malaysian Borneo has the oldest tropical rainforest on the planet, with the Sukau and lower Kinabatangan area of Sabah (second largest state in Malaysia) home to a decade old wildlife preserve. Unlike North America, where access is open to nature refuges, in Malaysia tourism is strictly monitored to ensure there is as little impact on the environment as possible from human visitors. Officials stopped our boat, and our guide had to show his permit before we started our journey down the Kinabatangan, Sabah’s longest river.

My rainforest adventure began at the Sandakan jetty, on Jambatan #23, the slatted wooden footbridge that served as a street for the water village. Just like back home, in Regina, shops lined the sides of the nearly three metre wide “street”—that, however, was where the similarity ended! 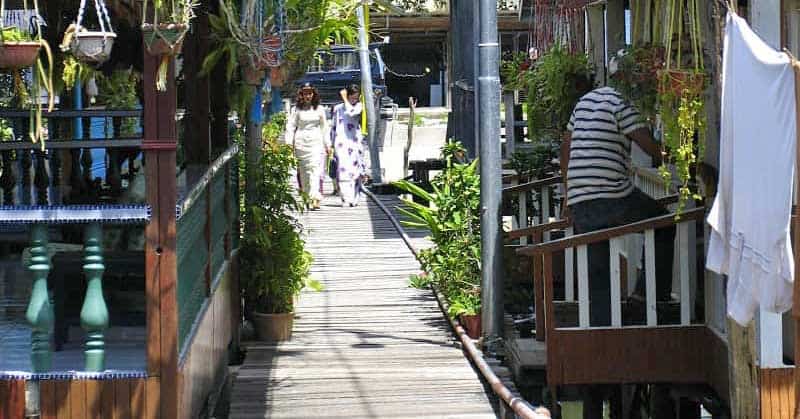 Drying shirts and pants hung from short clotheslines or over railings on the front deck of homes and businesses. Indeed, the pubic washroom had a large plastic pail of laundry soaking beside the sink.

Local women strolled past, enveloped from head to toe in colorful dresses, hair hidden beneath scarves despite the 32 degree temperatures. Inside, the shops gleamed with dark hardwood floors and walls, while bright curtains covered the windows. Prices were always negotiable!

Arriving in the Land of Rainforest Jungles 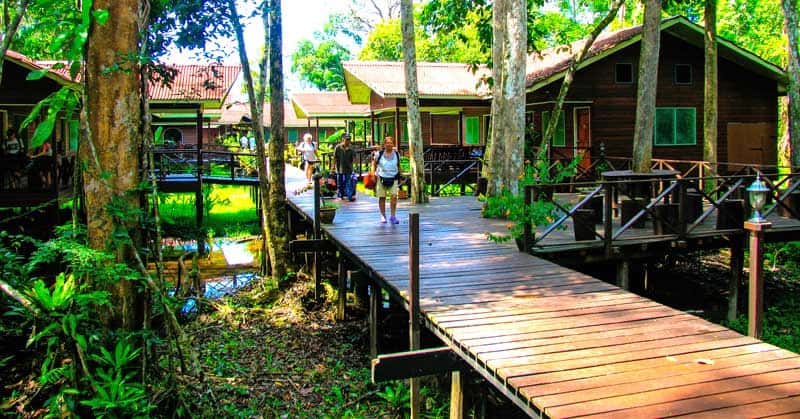 From Sandakan we had an hour boat ride across the Sulu Sea to the mouth of the Kinabatangan, then on to Abai Jungle Lodge, where I’d be without any contact to the outside world.

Thirty-five hours of airport and flying time had transported me to a world I’d often dreamt about, the land of rainforest jungles.

Local men from the Orang Sungai tribe waited at the boat landing to greet us — some of the friendliest and most helpful ‘bell boys” I’ve ever met. The rooms in the longhouse were simple, immaculate and with all the modern conveniences we Canadians are used to, including individual bathrooms.

The jungle lodges take energy conservation seriously. So, in order to have a warm shower an additional switch had to be flicked on to heat the water, rather like a trough heater back on the farm. 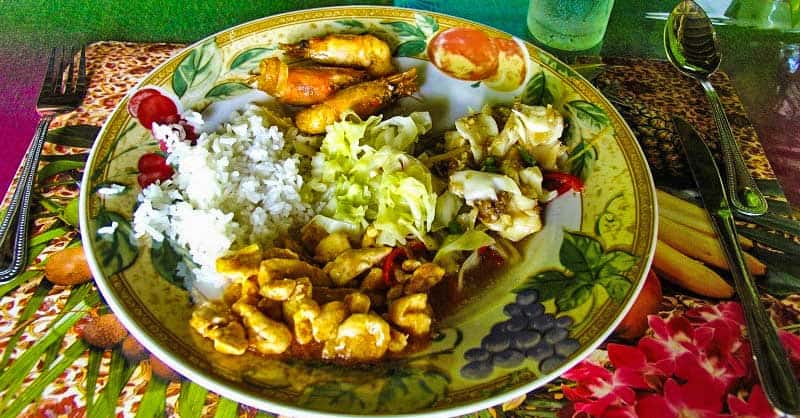 My first lunch at Abai featured grouper and white snapper, a local specialty. Along with lots of fresh vegetables and the mainstay of Malaysian meals, white rice, it tasted delicious! Generally, food was boiled or steamed, with the exception of bananas, which were deep fried in batter and one of my favorite foods throughout the country.

Boardwalk Through the Jungle

Of course the main reason for a visit to the rainforest was to experience the jungle and learn more about the wildlife. In keeping with the mandate to keep human interaction in the environment to a minimum, I was given two ways to explore — walking the boardwalk through the jungle and taking the guided boat tours. I took both!

Abai’s 500 metre long boardwalk connected the jungle to the guestrooms. It stood nearly two metres up off the ground. A stone’s throw from my room, I entered a magical Jurassic-seeming environment, far removed from any my previous experiences from movies. 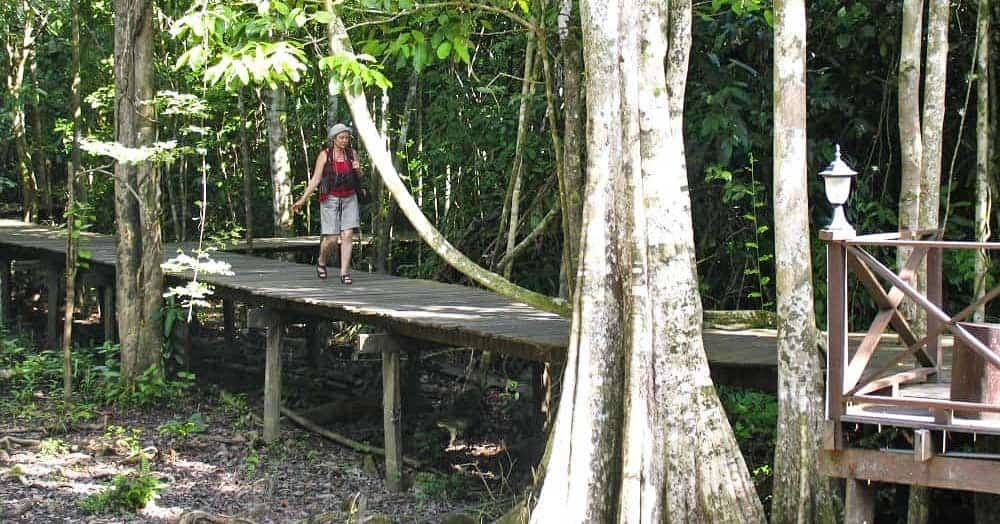 Boardwalk into the jungle at Abai Jungle Lodge

I soon found that the rainforest isn’t a quiet place! “Ack-ack, ack-ack,” clicked a gecko, adding harmony to the echoing kak-kak of the hornbill, the high whine of Borneo cicadas, and the tonk-tonk of the brown barbet. Under my bare feet, the belian hardwood, or ironwood of Borneo, deck boards felt smooth and warm.

The rich scents of rainforest hibiscus flowers and tibouchina shrubs lingered, without a wind to whisk them away. While I’ve used a lot of cinnamon, it was the first time I’d seen the tree it comes from. Although I’m not fond of tapioca, it was another tree I was surprised to find in the jungle.

And of course, there were also banana trees with their huge leaves. I’d already found, in the cities, that my favorite food from street vendors was fried bananas, or Goreng pisang in Malay.

So Much to See in the Jungle! 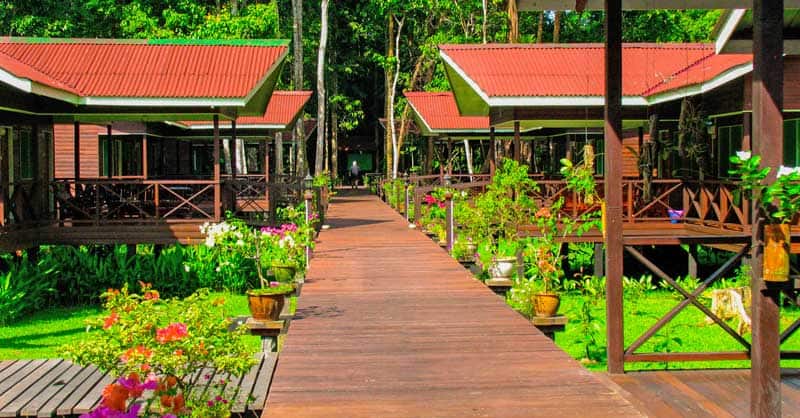 Heavy clouds promised an afternoon downpour over the yellow water of the Kinabatangan River — I was about as far away from the Saskatchewan prairies as I could be!

Long green vines twisted above and below me, while ferns, their fronds larger than fingers, filled the spaces between the towering trees of the dipterocarp forest. Sabah is one of the richest areas in the world for the dipterocarp species, an amazing variety of around 475 different types of giant trees, growing to heights of between 40 to 70 metres high, with the tallest living specimen nearly 90 metres.

Numerous animals, which I’d only seen before in zoos, if at all, also inhabited the jungle trail at Abai. 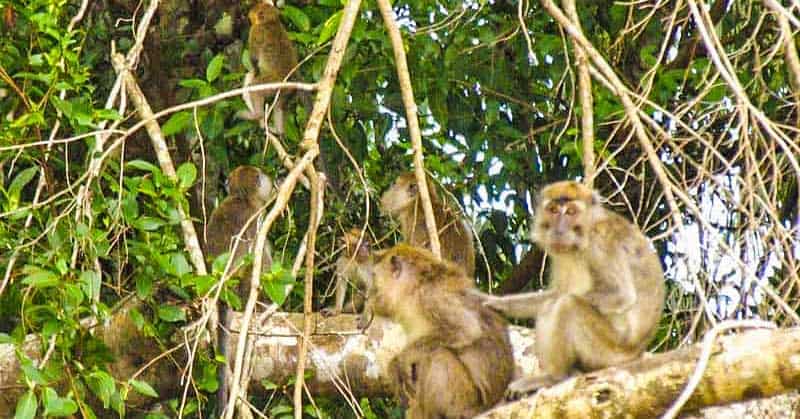 Monkeys in the jungle, as photographed from the boat ride on the river.

I heard the long, deep call of a male urangutan long before I saw him, perched high in one of the trees. Silvered Langur monkeys added their chatter to the bird songs and insect hums and rustling leaves that were at once everywhere and nowhere in particular. Earlier, others at the Lodge had also seen a clouded leopard and a sun bear from the boardwalk. 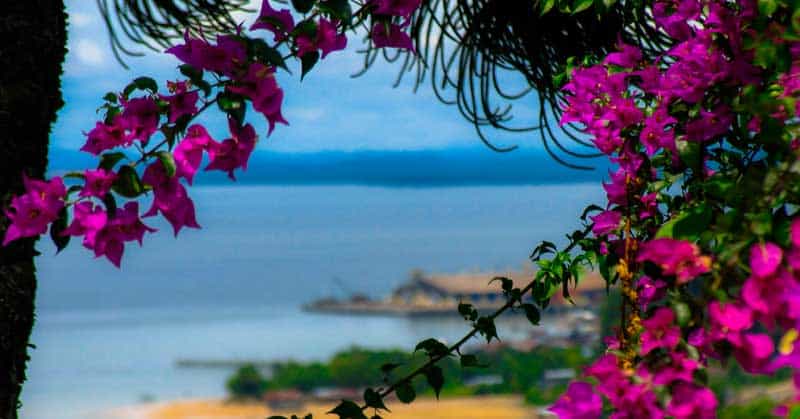 The flora and fauna were amazing!

Most of my wildlife watching, however, happened on the boat rides up and down the rivers, as our guide sighted creatures in the jungle along the shore.

My first glance of the rare, enormous red-nosed Proboscis Monkeys, found only in Borneo, resulted in a grainy photo. If only I’d had a better camera zoom! At dusk, I watched a female Urang utan and her child build a nest for the night high in the trees, before we headed in for the evening. Sunset turned the skies and water to gold—a complete contrast to the rainbow of prairie sunsets.

After dark there were more adventures. Our boat slid quietly over the water to the Mangrove trees, where fireflies trying to attract a mate blinked off and on like mini Christmas lights. I remembered the amazing insects from my childhood, but sadly, they’ve disappeared from rural Saskatchewan.

Early Morning in the Jungle 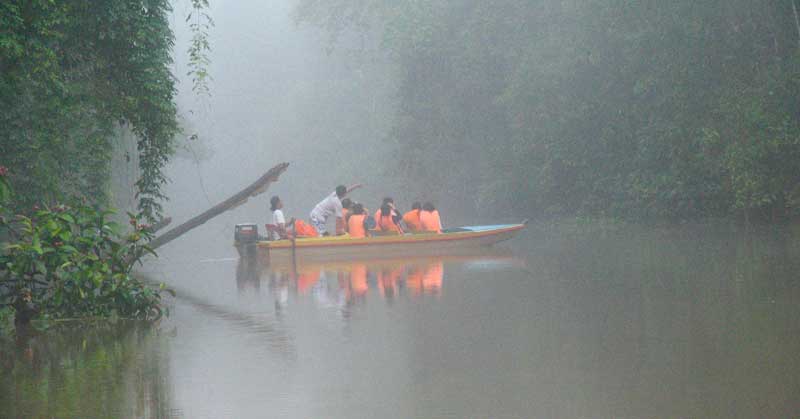 MIsty morning before sunrise on the river.

At five the next morning, when my guide knocked on my room door as a wake-up call, I wondered if it was possible the rainforest jungle still had mysteries I hadn’t seen. It did.

Mist rose off the river, shrouding the jungle, carrying the sound of the boat motor like it was a giant insect in search of prey.

A bright blue Kingfisher bird, as tiny as a hummingbird, flitted in and out of the fog. Bubbles rose up in the middle of the river—the air bubbles of a crocodile, which our boat carefully skimmed around.

Small monkeys, 15 or more of all sizes, the tiniest like kittens, walked along the jungle floor in a line an artist might paint in a children’s counting book. Overhead, a snake hung from the branches of a tree.

More Adventures in the Rainforest 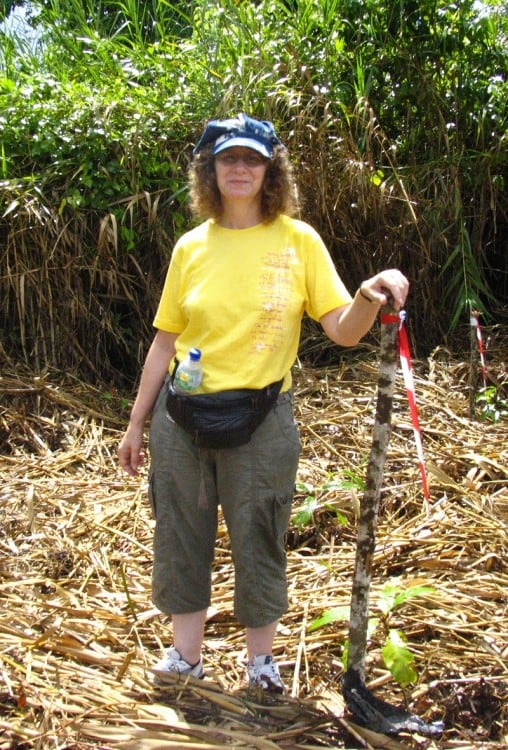 Linda Aksomitis planting a tree in the rainforest.

Like most visits, it’s always the people along the way that make a trip memorable. Tour guides in Malaysia, I learned, have an intensive training period on its history and wildlife before they earn their licenses—without the “eagle eyes” and enthusiasm of our guide, Eric Roland, the jungle would have kept her mysteries mostly hidden.

In the lodges, the serving boys spent their spare time playing guitar and singing in the public area, making me feel like a welcome guest in their home.

Each day brought me new experiences in the jungle, my next one at Batang Ai National Park, where I visited the Semenggoh Wildlife Centre with its population of Orang Utans. This sanctuary for the “wild men of Borneo” as the Orang Utan are also known, rehabilitates these creatures for release into the wild.

Before departing, I planted a Ficus tree in the Rainforest to help compensate for the footprints I’d left behind in one of the world’s most amazing places.

I was a guest of Tourism Malaysia on my trip, which was through S.I. TOURS SDN BHD, sitoursborneo.com, and my guide was Eric Roland, wildlife photographer. While my visit was hosted, I retain full editorial control of the articles I publish.

Kathmandu is one of the most fascinating cities on the planet. These 10 best things to do give you an insider’s view on this city in Nepal.

6 Best Activities for Nightlife in Japan

There are some unique opportunities for nightlife in Japan. Discover six, from the Monster Cafe to the Robot Restaurant, in this collection of six options.

Rice pudding is one of those desserts that has a place in almost every culture around the world--with variations to suit each one. In fact, for thousands of years rice pudding was considered a good way to treat stomach ailments. If you're like me, you may have even...
Read More

The photo in the header above was taken by Linda Aksomitis at Abai Jungle Lodge at mid-afternoon looking out on the Kinabatangan River. Abai Lodge is in Kinabatangan, Sabah, Malaysia. 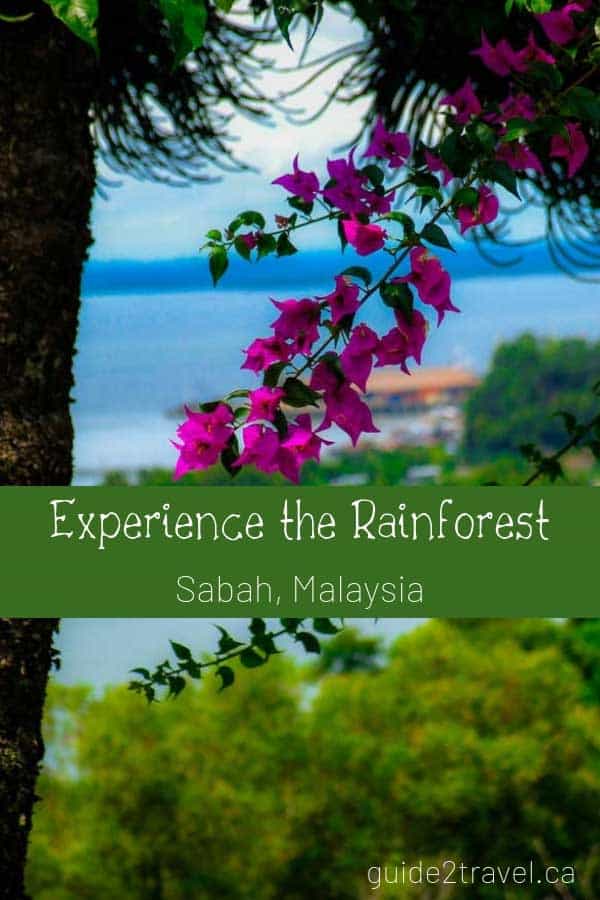 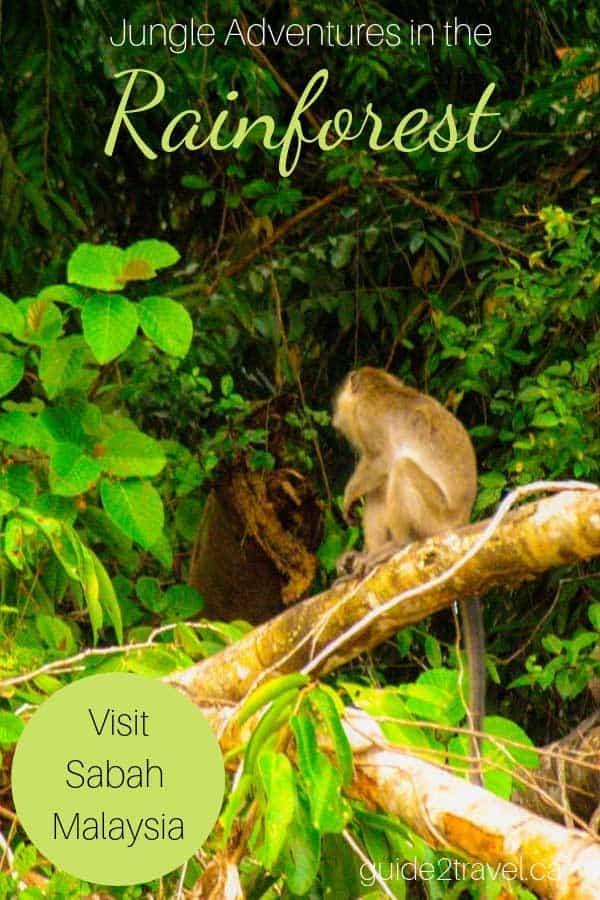 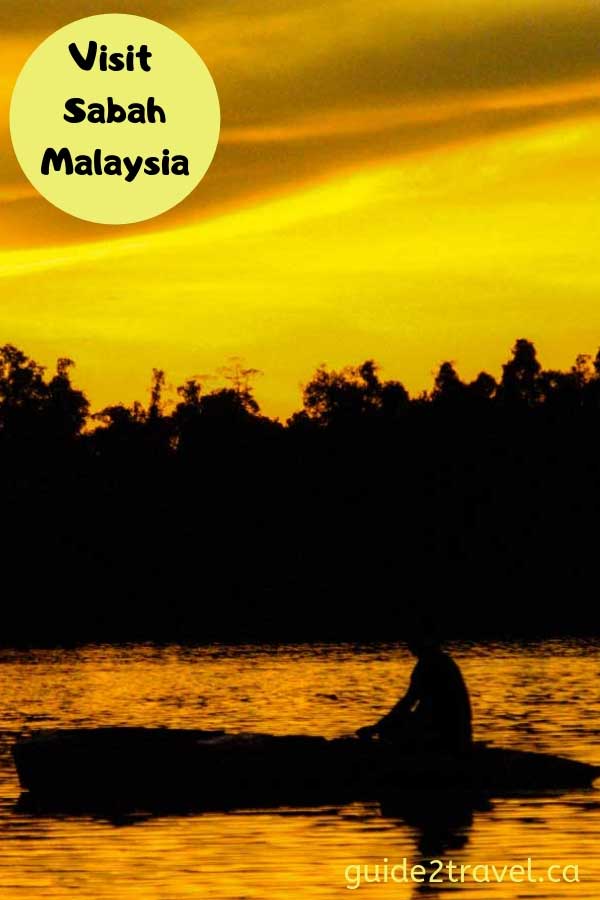