7 Reasons to Visit the Kentucky Derby Museum When You’re In Louisville, KY

A visit to Louisville, Kentucky, isn’t complete without a visit to the Kentucky Derby Museum on the grounds of the Churchill Downs racetrack. Even if you’ve never followed horse racing and you’re not a regular at gambling sites, you’ll find all kinds of fascinating history going back nearly a century-and-a-half to the first running of the Kentucky Derby — the most exciting two minutes in sports.

And here are my top 7 reasons to put the Kentucky Derby Museum at the top of your list of places to visit in Louisville, Kentucky. 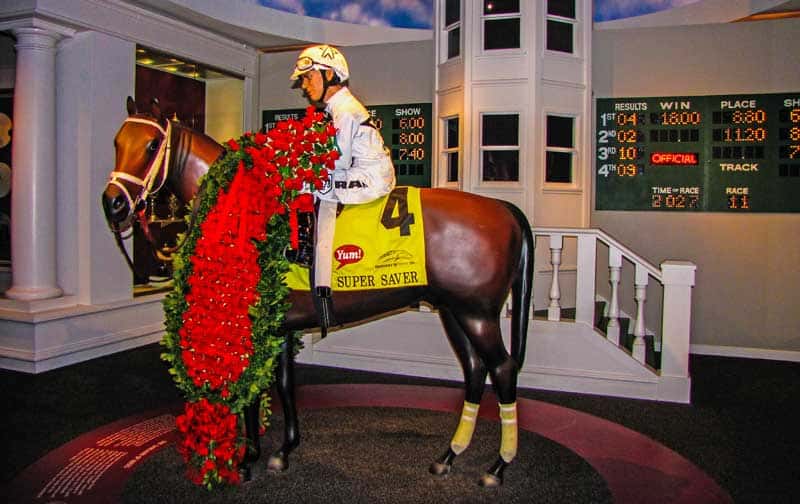 The Kentucky Derby is the longest continuously running horse race in the US. Both of the other Triple Crown Races started earlier, but missed years: Belmont Stakes started in 1867, and the Preakness Stakes in 1873. The Triple Crown, while commissioned in 1950, honors each horse that has won all three races throughout horse racing history.

In fact, the Triple Crown is the feature of the Museum’s exhibit: Justify (first winner in 1919) and a Century of the Crown.

When it opened in 1985, the Museum collected more than a century of thoroughbred racing history. In 2010, it was completely renovated after being damaged in a flood in 2009. In addition to artifacts, the Kentucky Derby museum has a large collection of images, printed and oral materials, as well as a full free online digital collection.

In addition to what museum curators have gathered, the collection includes research archives from a number of others. Jim Bolus, author of seven books and a one-time curator of the museum, left his materials to the museum on his death in 1997. Industry participants, like trainer, D. Wayne Lukas and jockey, Bill Shoemaker, also contributed significantly. 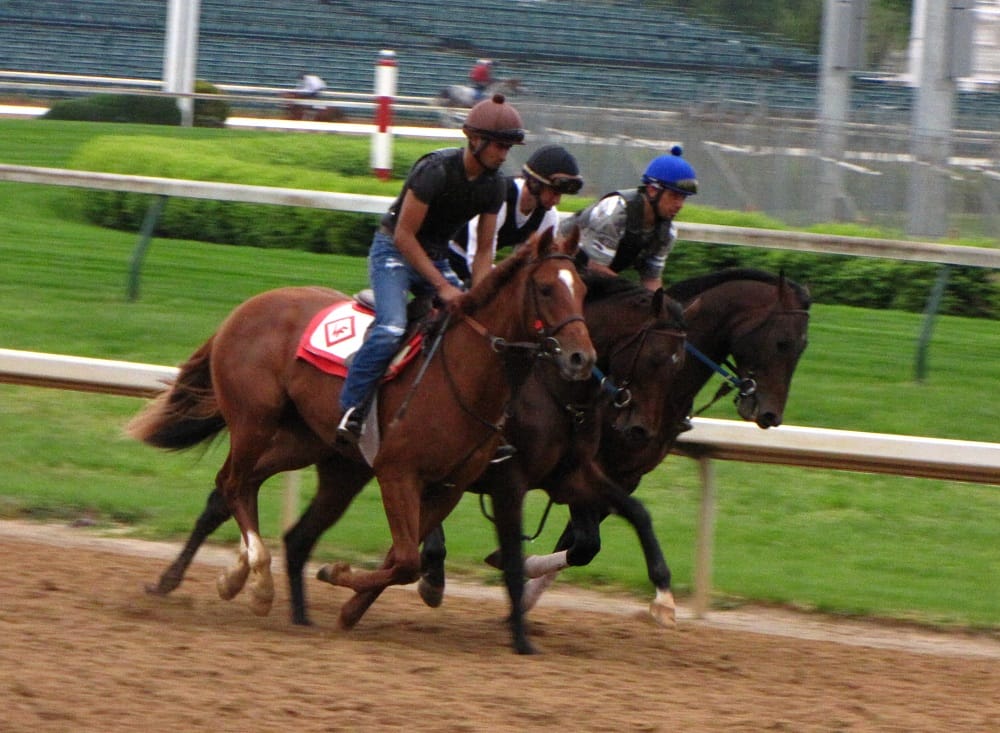 Jockeys practicing for the Kentucky Derby at Churchill Downs racetrack.

When I visited the Kentucky Derby Museum, tour guide, Miss Angie, took my group on the Barn and Backside Van Tour. It took us around the barns area, eventually letting us off to watch the horses practice from a vantage point right beside the track, rather than the stands.

While I was lucky to see horses that were entered in the Kentucky Derby, there are horses stabled at Churchill Downs through the whole season, so no matter when you visit there will be some racehorses around. Grooms will be bathing them, cold walking them before practice and cooling them out after running. You can be sure you’ll get an insider’s view of what happens in the stables before horses get to the finish line.

I also took the Walking Tour through the Jockeys’ Quarters, Millionaires’ Row, the Press Box and other areas of Churchill Downs.

I have one all-time favorite racehorse, the first Canadian horse to ever win the Kentucky Derby, Northern Dancer.

This young stallion won seven of nine starts when he was a two-year-old, so when his new Texan jockey, Bill Shoemaker,  got him as a three-year-old, he was already an established winner. Shoemaker, however, decided to ride Hill Rise in the Kentucky Derby, leaving Bill Hartack to become Northern Dancer’s permanent jockey.

I remember the 1964 Run for the Roses (another popular name for the Kentucky Derby) well. It was May 2, 1964 — I was as excited as all the other Derby fans as I watched the black and white television count down to race time. Even though he was a small horse, Northern Dancer was still a Kentucky Derby favorite, running second in the betting only to Hill Rise, the horse Shoemaker had chosen to ride.

Both Hartack and Shoemaker held their horses back at the start of the race, so Mr. Brick set the early pace. But the pace was still fast, with Northern Dancer soon taking the lead and Hill Rise hot on his heels. Like millions of others, I didn’t breathe as the horses galloped closer and closer to the finish line. Northern Dancer was out front, but Hill Rise had longer legs and a pro for a jockey–he was gaining.

In horse racing, records are set and broken regularly. At the Kentucky Derby Museum you can step into the Warner L. Jones, Jr. Time Machine and go all the way back to 1918 to watch every event.

Northern Dancer, in the 1964 Kentucky Derby, had what it took to become a champion — when the race ended this Canadian horse had set a new track record, finishing the Kentucky Derby in two minutes flat. His record stood until 1973, when it was broken by Secretariat at 1:59.40. Today, some of Secretariat’s records still stand and you’ll find a whole exhibit dedicated to this horse along with his race in the time machine.

While Secretariat also won the Triple Crown, Northern Dancer missed by a race. However, Northern Dancer still made his mark on the world, and was named  the 1964 Canadian Athlete of the Year — the first time ever for an animal — over such competition as hockey star, Gordie Howe, and the heavy-weight boxer, George Chuvalo, who was never knocked off his feet. 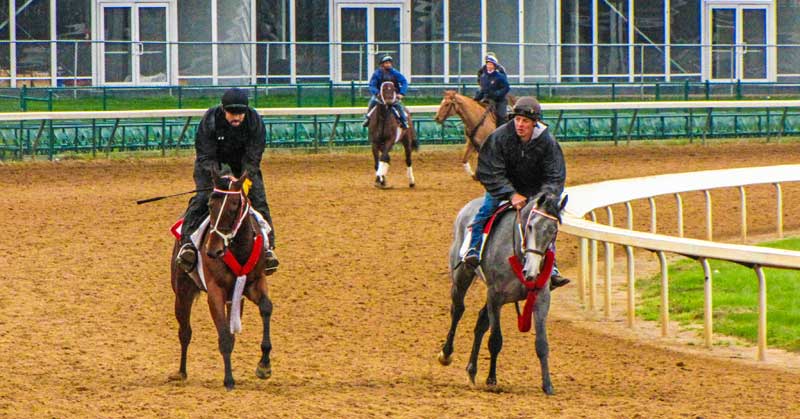 Trainers out with their thoroughbreds at Churchill Downs.

The first Kentucky Derby ran on May 17, 1875. And the horse that won it? Aristides, which few outside the industry may know was ridden by African American jockey, Oliver Lewis. Ansel Williamson, renowned African American trainer, had trained Aristides.

Indeed, as you’ll learn when you explore Kentucky Derby history at the Museum, African Americans dominated horse racing in the late 1800s, winning 15 of the first 28 Derbies and training six of the first 17 winners. 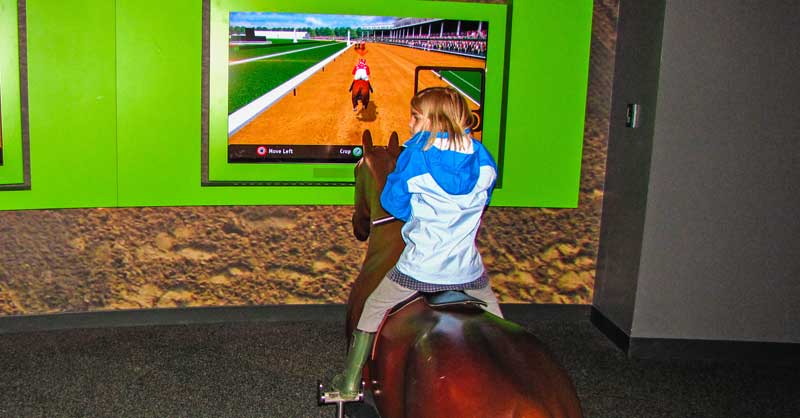 Rider’s Up simulation in the Kentucky Derby Museum in Louisville, KY

The Rider’s Up simulation at the Kentucky Derby Museum is popular with young and old alike! You get to select from three types of horses: frontrunner, stalker and closer. What’s the difference? Well, each horse has its own particular “style” on the track, from jumping into the lead right out of the starter’s gate to finding a huge burst of energy near the end of the race to come from behind.

Mine That Bird, the 2009 Kentucky Derby winner, was one of those come from behind horses. “Bird” had a bad start, with other horses 8 lengths ahead before he ever left the gate. Running the rail on the sloppy track, his jockey, Calvin Boreal, passed all the horses to win by 6 3/4 lengths, for the longest margin of victory in over 60 years.

But no matter what type of thoroughbred you pick, the simulation is all about maintaining your stance riding like a jockey in a crouching position. You’ll likely find, as I did, that it’s a lot tougher than it looks!

#7 – See the Barbaro Memorial to a Popular Race Horse 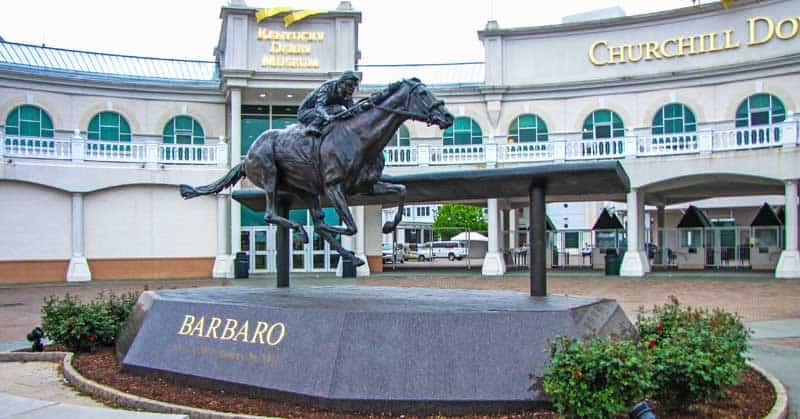 Memorial to Barbaro at the entrance to Churchill Downs in Louisville, Kentucky.

Not all dreams come true in horse racing and the statue of Barbaro memorializes one that didn’t. Barbaro won the Kentucky Derby by six-and-a-half lengths in 2006, but had a catastrophic accident in the Preakness.

He was deemed all right after a false start, but broke his leg in 20 places just out of the Preakness gate by the grandstand. His jockey, Edgar Prado, pulled him gently to a stop and leaned into the horse’s shoulder to help him balance until he could get help.

Veterinarians gave Barbaro surgery, including new technology originally designed for humans. While it seemed to work, Barbaro developed complications that continued to get more severe over the summer and fall. He was euthanized by his owners on January 29, 2007, when they felt the pain was no longer manageable. He was cremated and his remains interred under the statue at the entrance to Churchill Downs and the Kentucky Derby Museum.

A memorial fund was established to study Equine Health and Safety, funding research to find a cure for laminitis, the disease that ultimately led to Barbaro’s death.

I visited Louisville on a FAM tour as a guest of the city of Louisville, Kentucky. As always, I maintain editorial control of all articles I write as a result of my experiences.

More Things to Do in Kentucky

Cumberland Gap preserves 200+ years of history for visitors to enjoy from Daniel Boone to Gap Cave, along with nearby outdoor attractions of beautiful Lake Cumberland.

Adventures on Horseback: Crossing the Cumberland River and the Daniel Boone National Forest

The Cumberland River was wide—a ten-lane highway dividing a wilderness of granite and the Daniel Boone National Forest. Crystal clear, the water rushed forward catching in swirls and small rapids that glistened in the bright afternoon sunshine. The trail boss, Bill,...
Read More

Some of the most inventive people in the world are cooks—at least in my opinion—and they aren’t always chefs in upscale eating places either. My travels through the heartland of the United States have taken me to some quirky spots to find extraordinary meals in some...
Read More

The photo in the header was taken by Flickrized and is used with a CCBY-NC2.0 licence. It was taken at the Churchill Downs race track in Louisville, Kentucky. 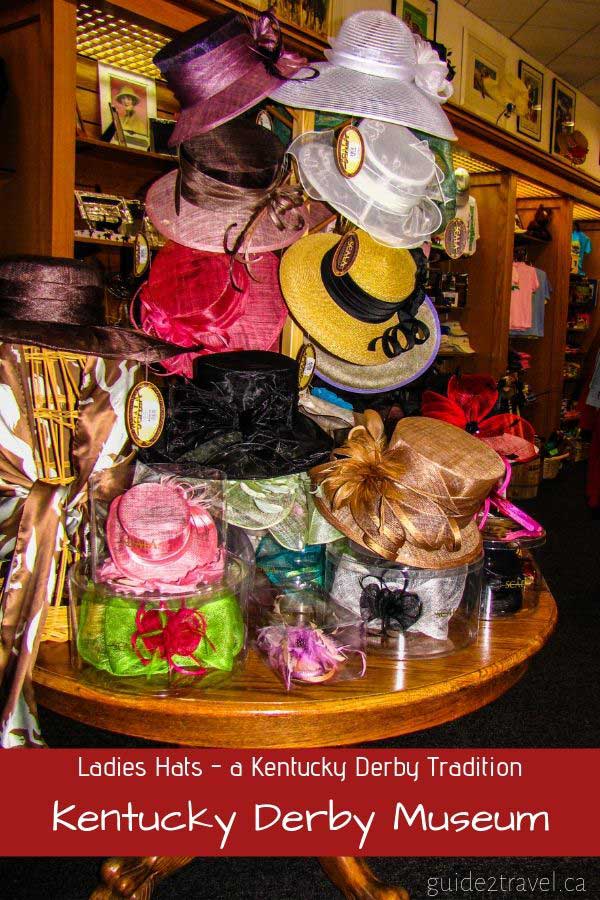 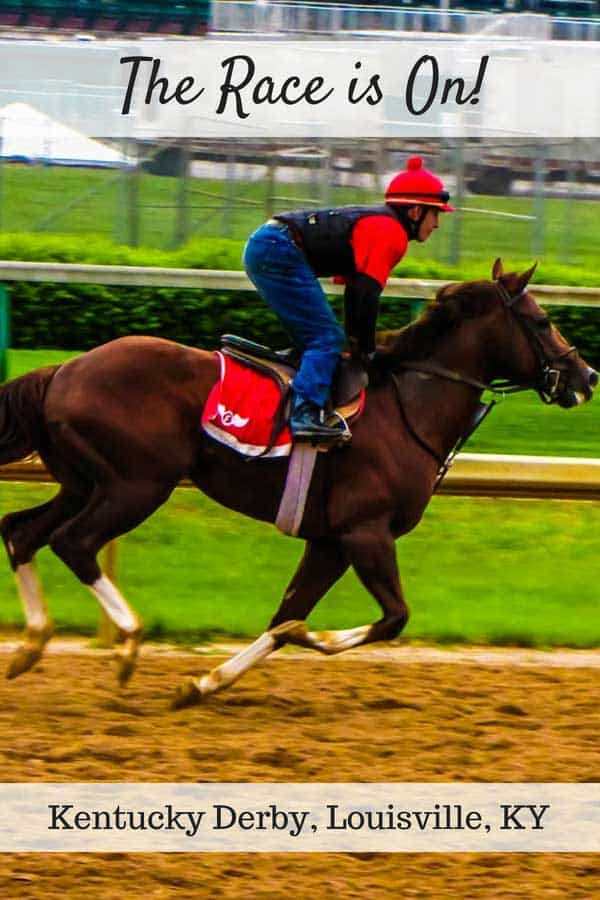 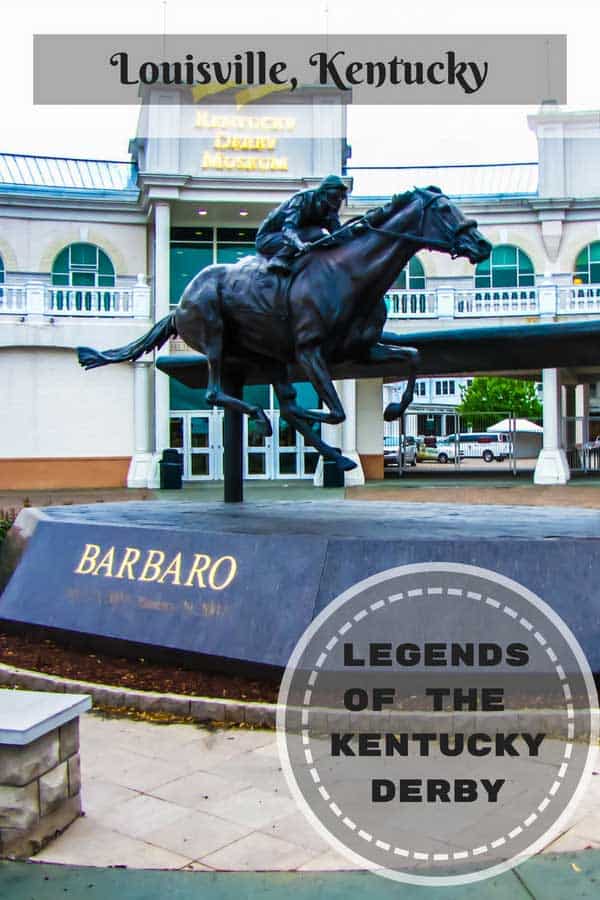 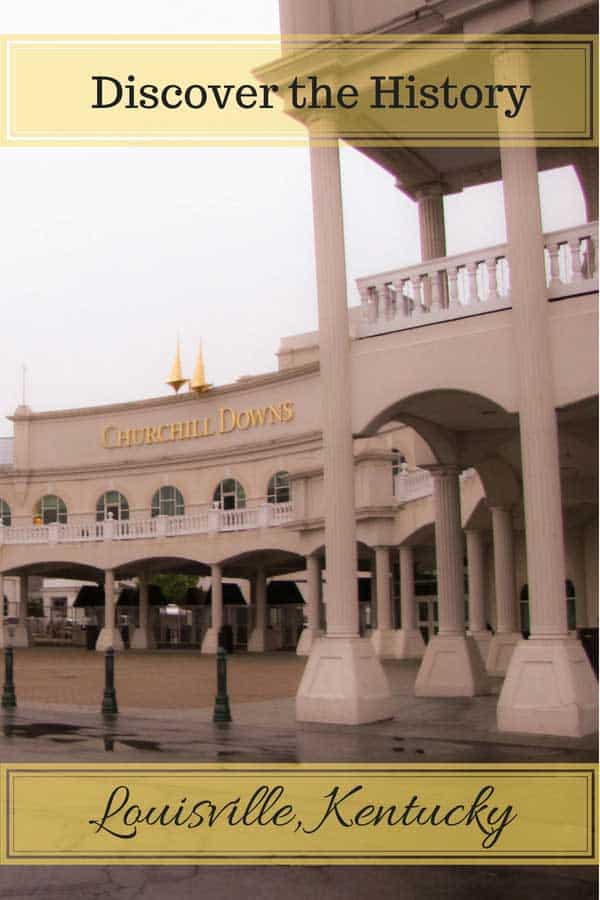