While trains once rumbled across 10,000 miles of tracks in Saskatchewan, now faded train crossing signs, like tombstones, mark thousands of places where the train tracks have been ripped out. Local passenger trains in Southern Saskatchewan are gone. Well, all but in the small town of Ogema. There, you can still listen to the whistle as you take an historic train ride in a 1922 Pullman train car.

And that’s just part of the adventure you’ll find in Ogema, if you’re interested in prairie history. Indeed, it seemed to me like the town’s Deep South Pioneer Museum was a village everyone had just stepped away from for the afternoon. Just over 100 km (50 m) south of the province’s capital city, Regina, a visit to Ogema is a perfect day trip. 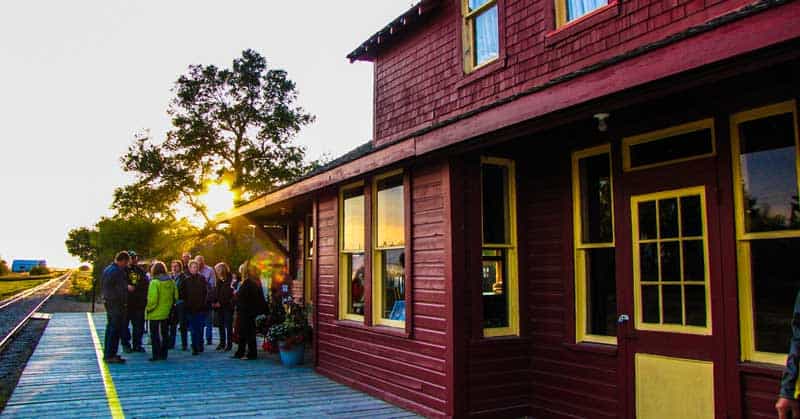 At first glance, you’d think the Southern Prairie Railway Station in Ogema was brand new. The paint is rich and red. The boards all smooth and even. The yellow trim on windows and doors as bright as the summer sun. However, it’s far from new. In fact, it was built in 1912, some 280 km away in the town of Simpson.

While Simpson may have been the first home to this station, it’s an identical twin to the original CPR station built in Ogema when the tracks arrived in the early 1900s. Local volunteers moved the station to Ogema in the fall of 2002, with restoration starting in 2003. The goal? To have it ready to celebrate Saskatchewan’s 100th birthday at Ogema’s 2005 Homecoming event.

By the time the July event occurred, the inside of the station house and office were restored to original archival blueprints. Pieces from the Deep South Pioneer Museum furnished the living quarters. Velocipede, signs, signal arms, conductor’s hat, telephone and telegraph were also all in place.

Visitors then — and now — find themselves in the early 20th century, waiting for the train whistle. I even bought an engineer’s cap as a souvenir on my visit! 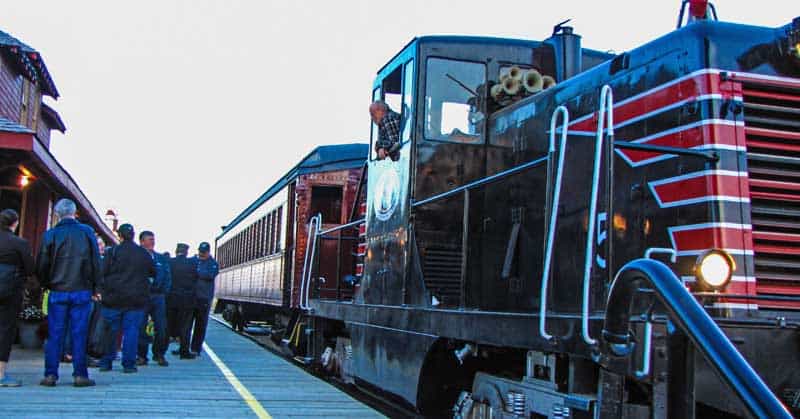 While the station and privately owned Red Coat Rail line train tracks were ready, it took the Ogema Heritage Railway Association (OHRA) a while to get established and find an actual train. It wasn’t easy. Indeed the The 1945 diesel locomotive, GE 44 Toner, came from Conway Scenic Railway in New Hampshire, arriving in Assiniboia (85 km away) in 2011.

Of course the SPR also needed a train car for the engine to pull and visitors to ride in. They found it that same year in Gettysburg, Pennsylvania. However, it was far from ready to use! Indeed, the 1922 Pullman coach, 70-passenger car, took 5000 volunteer hours to fully restore.

So, the fully restored locomotive, and partially restored passenger car, finally rolled down the tracks into Ogema on November 4, 2011. The Southern Prairie Railway’s Grand Opening happened the next summer, during the Ogema Centennial celebrations on July 7, 2012. Passengers started boarding the train to all kinds of adventures!

Adventures on the Southern Prairie Railway

The Southern Prairie Railway does a lot more than chug up and down the 60 miles (106 km) of former CPR (now privately owned) train tracks from Pangman to Willows. Every day offers a new adventure no matter your age or interests!

The heritage train, and tour of an original grain elevator, may be the most popular ride for many visitors wanting to experience early train travel, whether to rekindle memories or as a first-time experience. And the Kids Fun Train sells out quickly — as does the Robbery Train. What’s that? Well, your opportunity to experience a little old west Saskatchewan, with outlaws galloping up to the train on horseback and grabbing some loot from passengers. These outlaws, though, are a little more like Robin Hood in that any money raised during the “robbery” goes to a local charity.

Indeed, while few know it, southwest Saskatchewan was at the end of the notorious outlaw trail that ran from Canada to Mexico at the end of the 1800s. Infamous outlaws, like Butch Cassidy and the Sundance Kid, hid out in the badlands.

Fast forward a few decades and you’ve even got Al Capone hiding out too, smuggling booze into Canada during prohibition. That, of course, provides another opportunity for a fun adventure back in time with the Southern Prairie Railway’s Rum Runner train rides. Add in a prairie pitchfork fondue and settler’s supper and you’ve got a whole summer of fun! 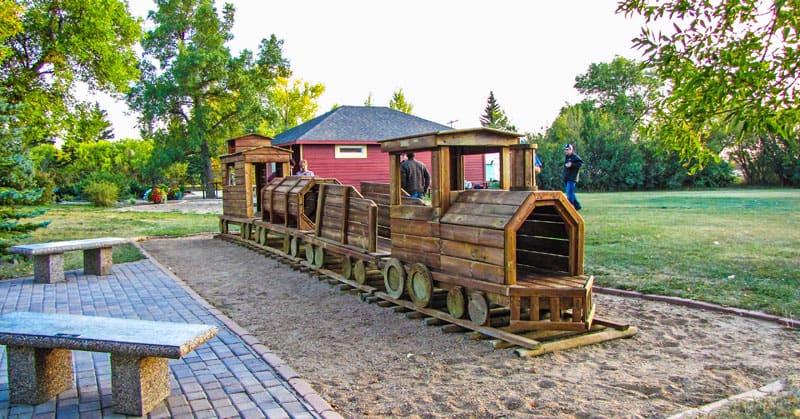 Rail Park next to the Southern Prairie Railway station in Ogema, Saskatchewan.

Want to know more about Saskatchewan’s train history? That’s part of every adventure with the Southern Prairie Railway, as you’ll have a guide telling you all kinds of stories.

But to get started, the CPR [Canadian Pacific Railroad] line first crossed Saskatchewan early in 1882, reaching the settlement of Moose Jaw in July of that year. If people are the life blood of a land, then in Canada, trains were its veins. Settlers came on the trains. Goods and materials came on the trains. A new way of life emerged in Saskatchewan as the rail lines expanded.

Train travel was a way of life for decades. If you had family down east or in Alberta, you simply bought your ticket and boarded the train. In the 1970s there were more than 10,000 miles of rail lines in the province. Now, there are around 1250 miles of provincially regulated railroads — all of them for moving freight. 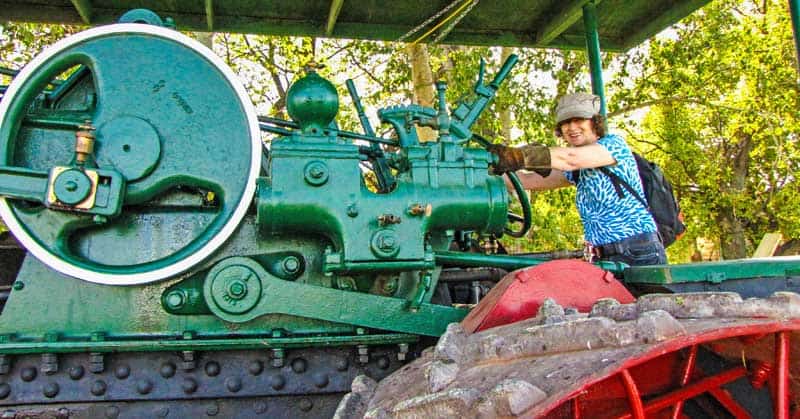 Your train ticket on the Southern Prairie Railway includes admission to the amazing Deep South Pioneer Museum, a pioneer village and farmyard in Ogema. In fact, the railway started as a committee of the museum, before eventually becoming a non-profit in its own right.

The museum itself, though, is much older. While the train station opened for Saskatchewan’s 100th birthday, the Deep South Pioneer Museum [DSPM] officially opened 25 years earlier for the province’s 75th anniversary. However, it had actually been growing and gathering both artifacts and buildings for a few years before the official opening.

You could say the ideas that grew the museum had the shape of a tumbleweed blowing over the prairie, spreading seeds that eventually grew into a multi-community commitment to preserving the history and heritage of Saskatchewan’s deep south.

Things to See at the South Pioneer Museum 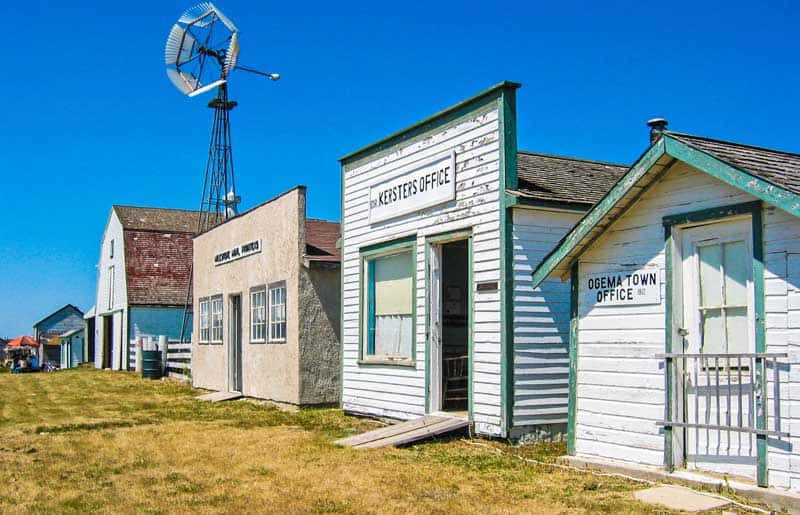 The Deep South Pioneer Museum has original buildings from Ogema and nearby communities all set up as an historic town.

Depending on when you visit the museum, you may find locals dressed in period costume around to answer your questions. And you’re likely to have lots of them!

Each building is fully “furnished” with artifacts suitable to its original function. While you’ll find traditional town buildings, like schools and churches and stores, it’s the “stuff” inside that really occupies your time. 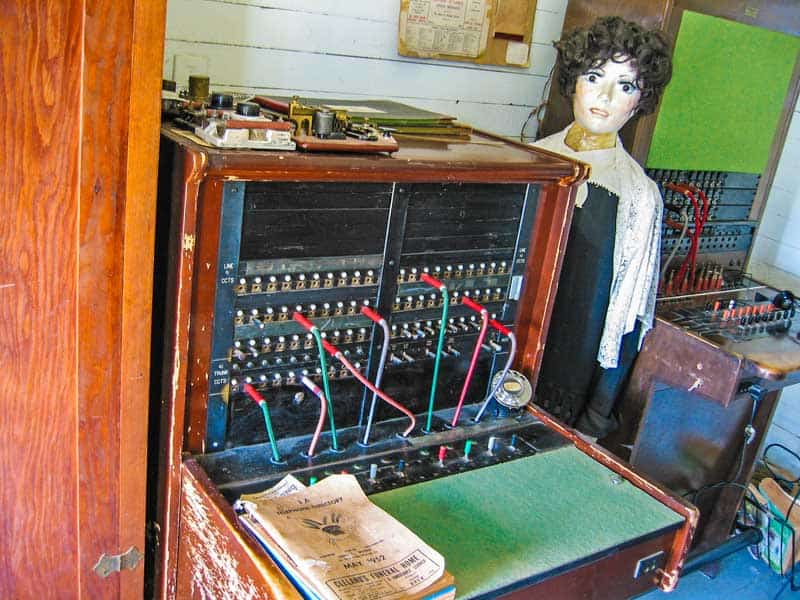 And there’s lots to see outside, too. The collection has 150+ pieces of farm machinery, including lots of tractors and a variety of implements. Some are stored in covered sheds, while others are neatly lined up in rows on the prairie. 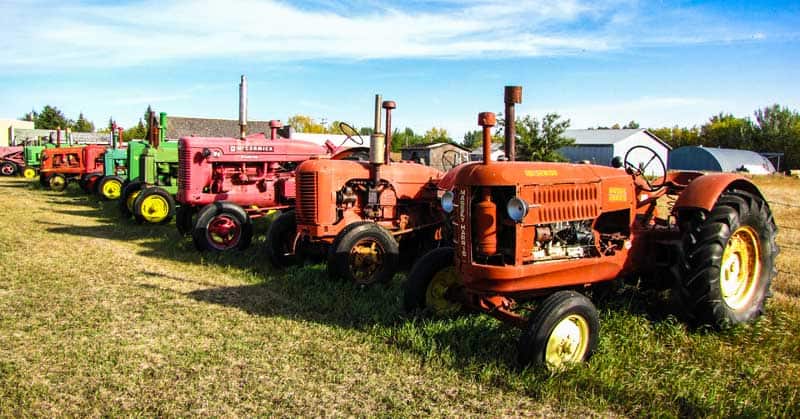 Row of vintage tractors at the Deep South Pioneer Museum in Ogema, Saskatchewan.

As well as artifacts from the past 100+ years of settlement, the collection also has a number of pre-settlement pieces. These provide evidence of the thousands of years when local Indigenous peoples were the only ones on the land. Most of these relics are in the form of stone tools and arrowheads. 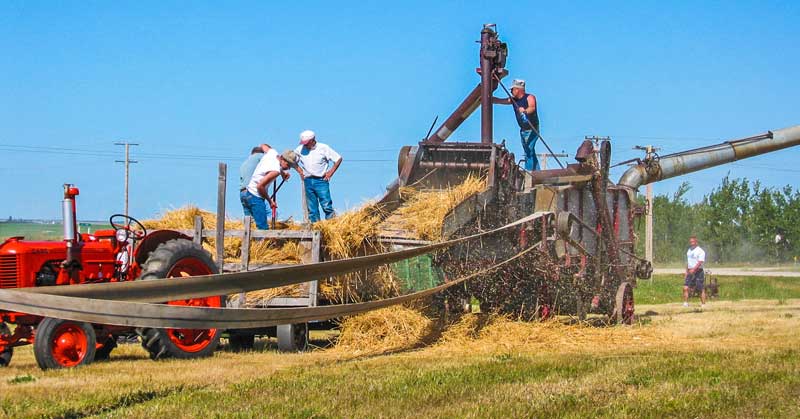 If you love to see old farm implements running, then visiting Ogema on Museum Day is a must. Once a year, the first Saturday of July, the community gets together to celebrate. I have two favorite events: the threshing and the parade of vintage farm equipment pulled by tractors. 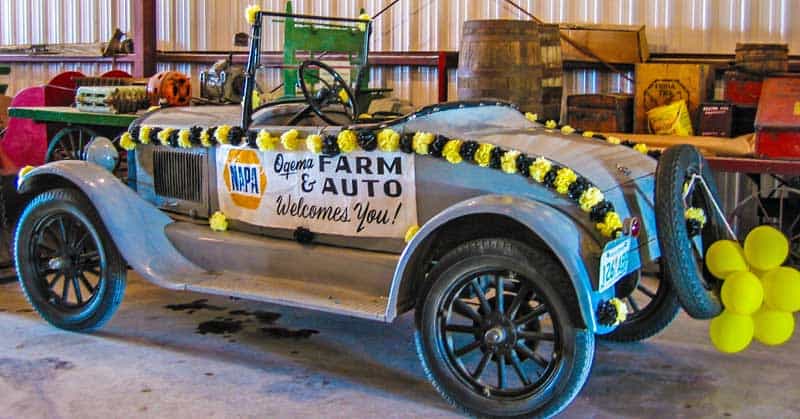 Vintage motor vehicle after a parade on Museum Day in Ogema, Saskatchewan.

We had complimentary tickets to ride the Southern Prairie Railway and explore the Deep South Pioneer Museum. This kind of supports helps us bring you all the stories on guide2travel.ca. However, we retain full editorial freedom in all articles, so share our experiences honestly.

The native prairie habitat of the Great Plains of North America has been ripped up by the plow, and replaced by grain fields, through most of the continent, including Saskatchewan. However, Herschel, a small town nestled where the Coal Mine Ravine joins the Eagle...
Read More

Casino Regina is one of Western Canada's premier weekend destinations for grown-ups. In addition to traditional casino options, it's also home to one of Regina, Saskatchewan's, most popular entertainment venues with the Casino Regina Show Lounge. Re-imagined and...
Read More

Who has seen the wind? Southeast Saskatchewan Library Week Tour

This planning guide will help you select the best places to stay in Regina, Saskatchewan, when you visit, no matter what part of the city, or its key attractions, you plan to see.

Saskatoon--Saskatchewan's bridge city--is the perfect getaway, no matter what kinds of attractions you're looking for! There are lots of things to do, with something for every family member to enjoy. We booked into Saskatoon for one of the summer's biggest motorsports...
Read More

Kayakers dip their paddles into the creek waters, still warm from a dry, hot summer--their path, however, is nearly blocked by a jagged row of rocks. The first man chooses his line, pushing towards the creek side, where his kayak lodges. The second, cheering as he...
Read More

The photo in the header above was taken by Linda Aksomitis at the Southern Prairie Railway Station in Ogema, Saskatchewan, Canada. 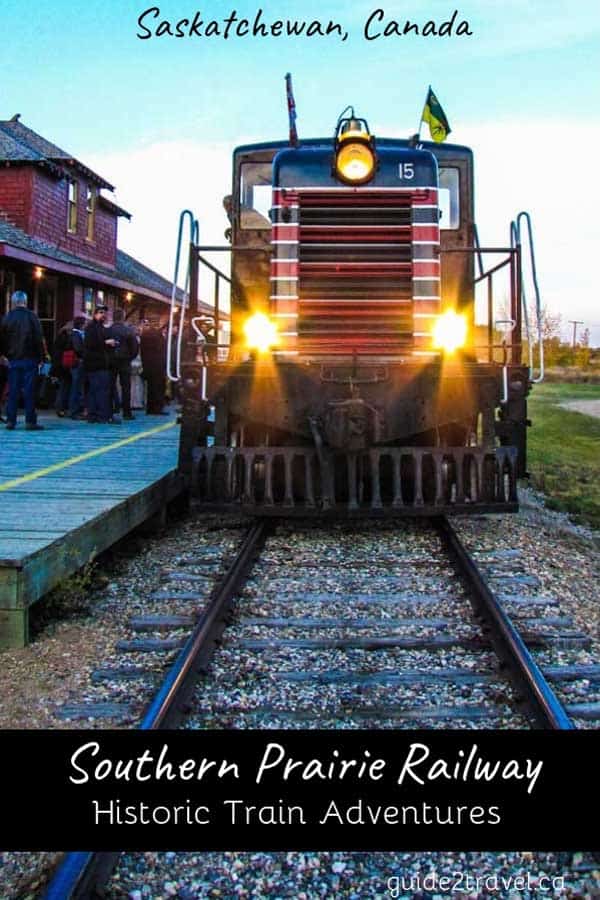 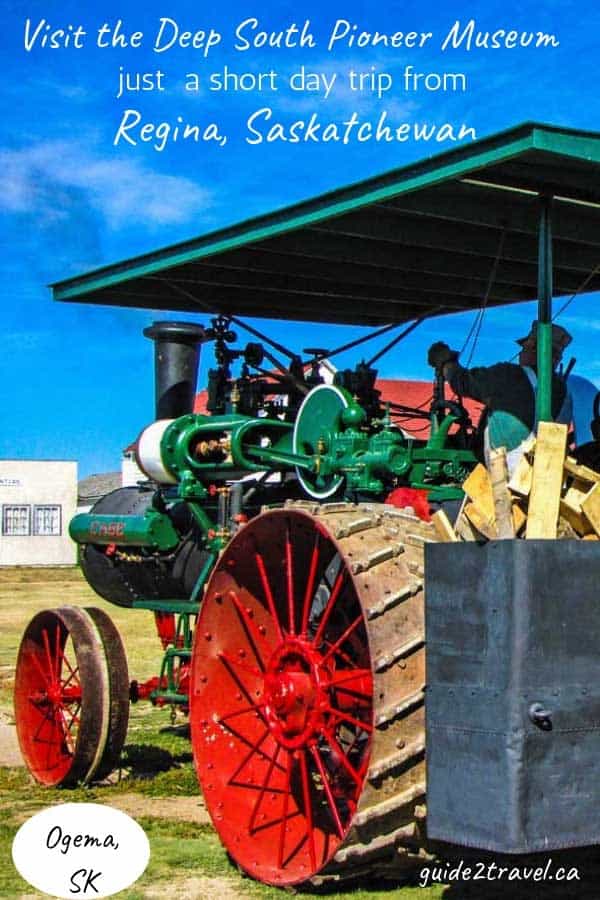 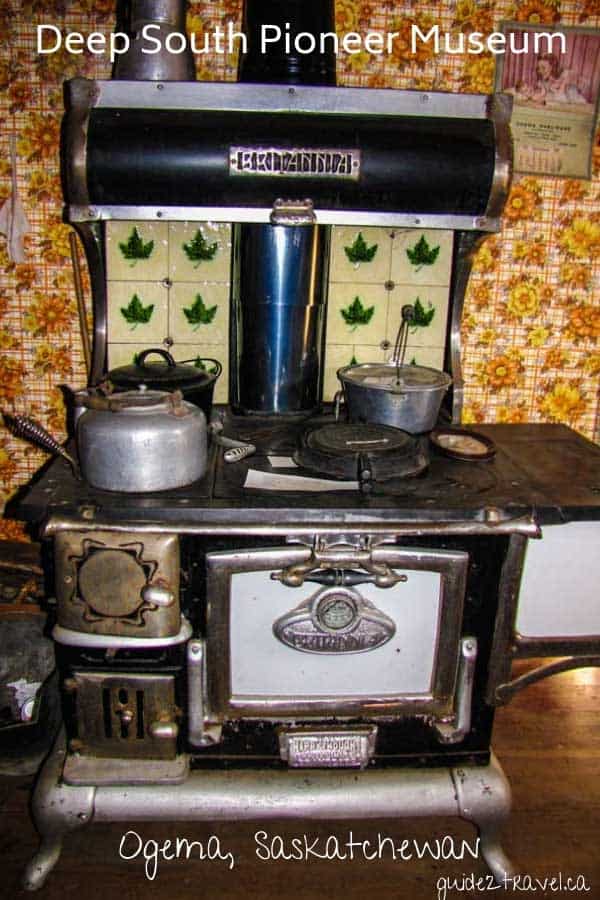