...travel adventures with a twist of history Latest ArticlesAdventures
;
If you’re a history lover, it goes without saying that London, England, is the perfect destination. In fact, today’s British Royal family’s reign spans 37 generations and 1200+ years! So, as the centre of the Government of the United Kingdom and location of Buckingham Palace, administrative headquarters of the monarch, there’s so much history it can be hard to know where to begin planning your visit to this city that’s the capital of legal UK casino gambling.

But if all the latest happenings in the Royal family have you interested in British Royal history, here’s my recommendation of top places to visit. 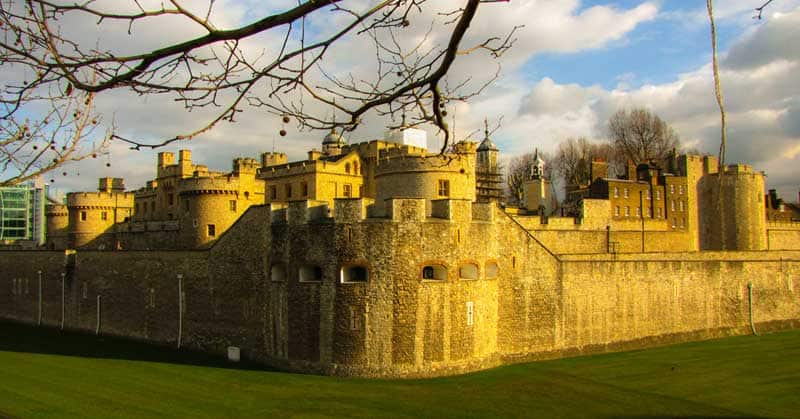 There are many reasons to put the Tower of London at the top of your list when it comes to exploring London — and the Royal Family. First, it’s an easy stop on the hop-on-hop-off bus tour (my preferred method of exploring new cities in a day). And second, the site was declared a UNESCO World Heritage site in 1988.

One of the reasons for its UNESCO designation is that the tower is a typical example of Norman military architecture. Indeed, it was built on the Thames River in 1066 by the Normans, when William the Conqueror invaded the country. Five centuries of monarchs continued to develop the tower and its palace (also called its castle) making it one of the symbols of royalty.

However, being sent to the Tower — Tower of London, that is — wasn’t a good thing! Indeed, the Tower of London has imprisoned kings and queens, saints and sinners, the guilty and the innocent … whoever stood in the way of ambition and power. 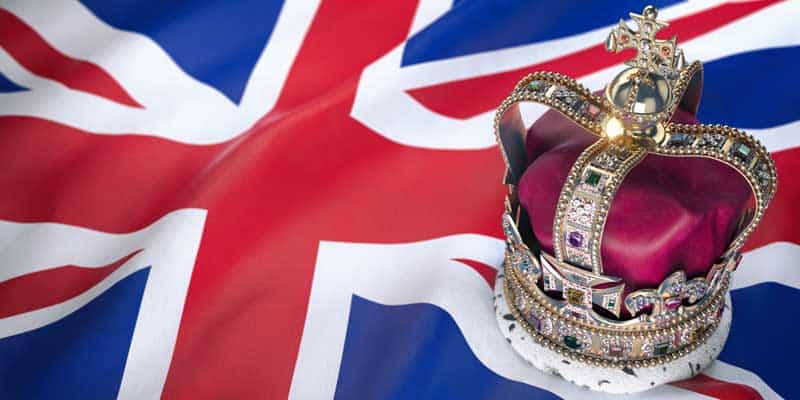 The third reason to visit the Tower of London is that it’s home to the Royal Crown Jewels. They’re kept in the Jewel House and Martin Tower, which I didn’t find the easiest place to locate. Indeed, the palace and grounds twist and turn through walkways, narrow stone stairwells, tiny private rooms and immense public ones, from tower to tower and building to building. In fact, if you have a poor sense of direction, you might find it easier to join a tour to make sure you don’t miss anything.

Wandering through the palace rooms provides some insights into the life of those “lucky” enough to live at the Tower of London back when it was a royal residence. Names scratched into the rock in the prisoner’s display area may give you the goosebumps, though, if you’re familiar with the many torture devices used during the middle ages.

While you won’t see any of those devices, you will see 600 years of crowns, robes, and royal regalia worn by Kings and Queens! The “Crown Jewels” have been protected at the Tower since the 1600s. Gazing at the 23,578 gems that make up the Crown Jewels, you may get a different kind of goosebumps.

If you’re like me, you may wonder if everything is real or a replica? They’re really real! You’ll notice small notes saying “In Use” for any not currently present.

Executions at the Tower of London 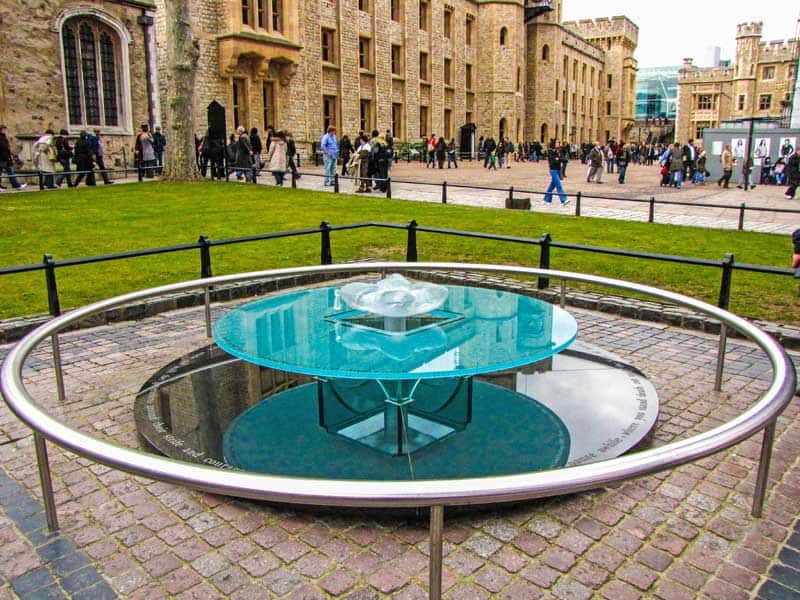 And the final reason for visiting the Tower of London is to learn more about the prisoners who spent from a few days to 37 years (Sir William de la Pole)! Most of the people imprisoned in the Tower of London met their fate on Tower Hill in public executions. However, seven men and women were executed privately on the Tower Green inside the palace walls.

For whatever reason, it seems we’re all drawn to actual the execution site where the beheadings were done in the courtyard. I wished it had been dark or dusk at least, so I might have glimpsed the ghost of Anne Boleyn (2nd wife of Henry VIII) and the French swordsman who put her to death, or seventeen-year-old Lady Jane Grey, refusing to convert to Catholicism even to save her neck.

There isn’t a gallows or guillotine though, nor any hint of the events that history has recorded. Instead, the poem by sculptor, Brian Catling, “May they rest in peace, while we walk the generations around their strife and courage, under these restless skies,” circles a small monument that names all who met their fate on these grounds.

Inside Buckingham Palace and Its History

Built in 1703, Buckingham Palace first served as the London residence of John Sheffield, 3rd Earl of Mulgrave and Marquess of Normandy. In 1761, King George III bought it for his wife. Fourteen of their 15 royal offspring were born there. Queen Victoria was the first monarch to use it as an official residence.

So, what’s inside Buckingham Palace? If you can imagine (I have a hard time!) there are 775 rooms in total, including 19 state rooms, 52 royal and guest bedrooms, 188 staff bedrooms, 92 offices and 78 bathrooms!

Buckingham Palace is only open regularly to tours during 10 weeks in the summer, typically late July to late September. 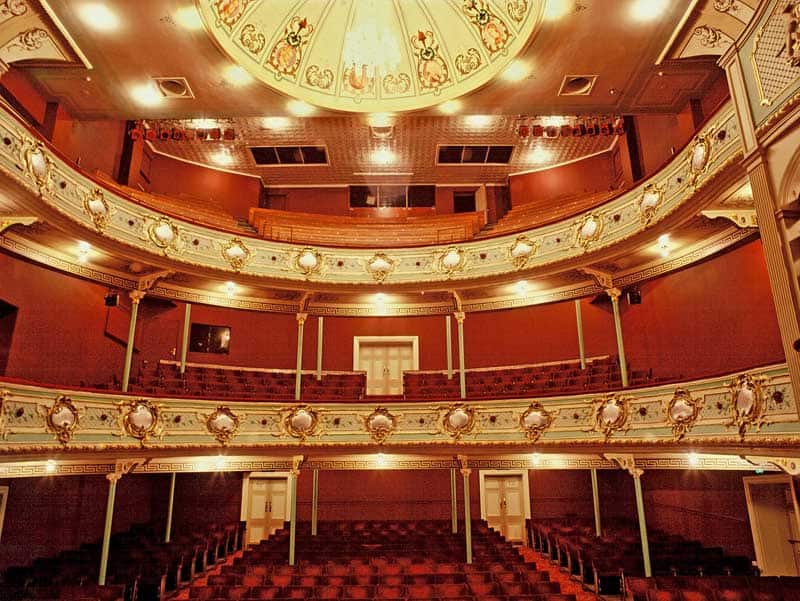 It’s always interesting to wonder if the Royal family enjoys the same things we “regular” folks do. And, it seems from stories preserved with Theatre Royal, Drury Lane, that they do.

Theatre history has it that Queen Elizabeth II often visited the theatre with her children, sometimes even skipping the Royal Box to sit in the stalls. Then General Manager, George Hoare, often seated them himself. In fact, he even applied to Buckingham Palace for permission to place the Prince of Wales crest above his box.

But of course, many Royals before Queen Elizabeth II and her family no doubt enjoyed Theatre Royal, Drury Lane. The fourth building in the same location, the present Theatre Royal was constructed in 1812. King Charles II had given dramatist, Thomas Killigrew, a charter for the first back in 1663. Much smaller than subsequent constructions, the first Theatre Royal sat on the current main entrance.

On my visit, I was lucky to see a performance of Shakespeare’s classic, Oliver. No matter what’s playing though, an evening at the Theatre is a must on your London visit. 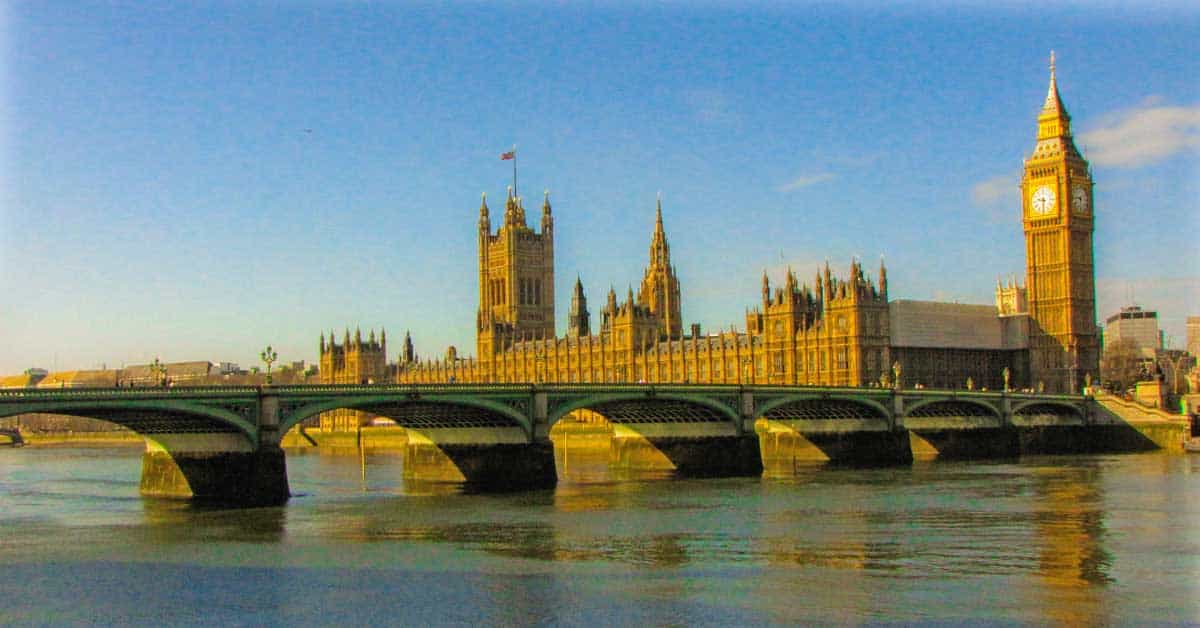 Whether you just enjoy an outdoors walk beside the UK Parliament or go inside, for a tour, the building is amazing. The distinctive sand-coloured limestone exterior you see came from the Anston Quarry in Yorkshire in the mid-1800s. Its Gothic architecture was the design of 19th-century architect, Sir Charles Barry.

The biggest link of the Parliament to the Royal Family, however, is inside, because the Parliament’s Great Hall (or Westminster Hall), consists of the remains of the medieval Old Palace. Built by William II between 1097 and 1099, Westminster Palace has been home to many royal residents. Indeed, today’s Houses of Parliament are still known as the Palace of Westminster.

There are many touring options for the UK Parliament, both guided and self-guided (most require admission tickets and aren’t free). The best one to see, though, if you want to learn more about the Royal Family in the Palace of Westminster, is the 75-minute Royalty and Splendor Group Tour. You’ll get to peek in everywhere from the Robing Room to the majestic Royal Chamber. This tour includes a three-course Victorian inspired dinner in the Barry Room.

The Palace of Westminster and Westminster Abbey, including Saint Margaret’s Church, were designated a UNESCO World Heritage site in 1987. 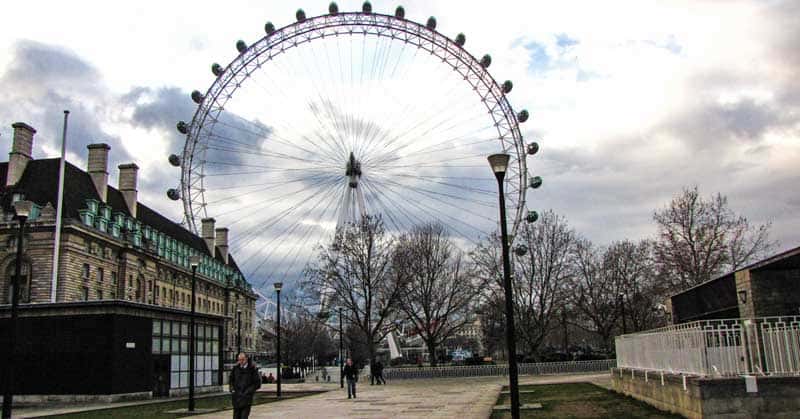 While I’ll freely admit I have no idea if any members of the Royal Family have ever ridden the London Eye (but I bet they have!), the London Eye did light up in red, white and blue (colors of both the Union Jack and the U.S. flag) to celebrate the birth of Prince Harry’s son, Archie Mountbatten-Windsor.

Prime Minister Tony Blair officially opened the London Eye on New Year’s Eve, 1999, although visitors didn’t get to ride in it until March 9, 2000. What is the London Eye? An enormous ferris wheel on the banks of the River Thames. At 443 ft (135 meters) tall, with a wheel diameter of 394 ft (120 metres) the London Eye is over 44 stories high!

Indeed, the London Eye looks like a giant bicycle wheel with 64 spokes. Designed to be a metaphor for the end of the 20th century and time turning into the brand new 21st century, the half-hour ride is one of the top tourist attractions in London.

As you can imagine, the view from the top of the London Eye would give any member of the Royal Family — or visitor to London — a Royal view of the city and the River Thames. 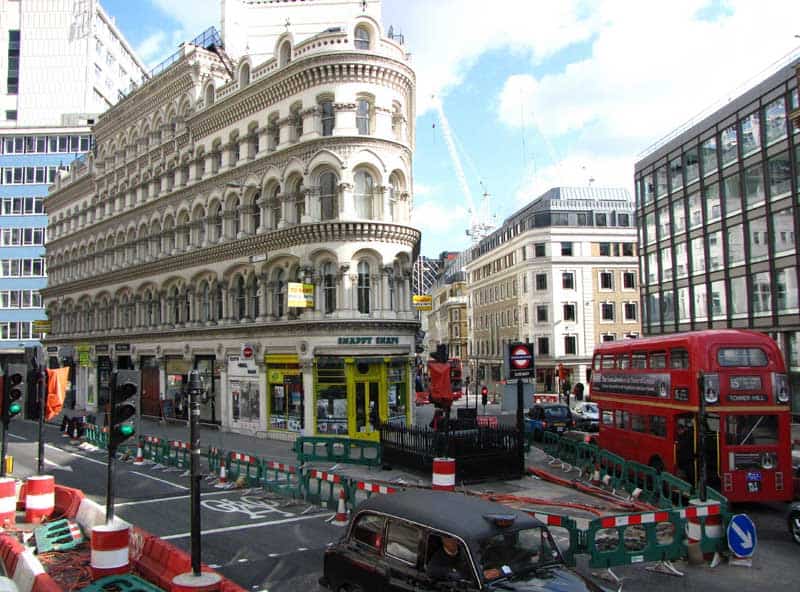 London’s busy streets! From the double decker buses to the taxi cabs to the historic architecture.

Book a Tour at the UK Parliament – https://www.parliament.uk/visiting/

Visit the Tower of London – https://www.hrp.org.uk/tower-of-london/#gs.gbcpdo

History at the Tower from the Historic Royal Palaces site – https://www.hrp.org.uk/media/1171/tolhistory_v1.pdf

There’s lots to do on a Prague weekend getaway, whether you want to explore 10th century Prague Old Town or visit the Beer Museum!

There’s lots to see in Berlin from Cold War planes to the Berlin Wall — check out these day trips, along other important attractions in Berlin.

Linda Aksomitis took this photo of Tower Bridge from the Tower of London Castle in London, England. Tower Bridge is a combined bascule and suspension bridge built between 1886 and 1894. 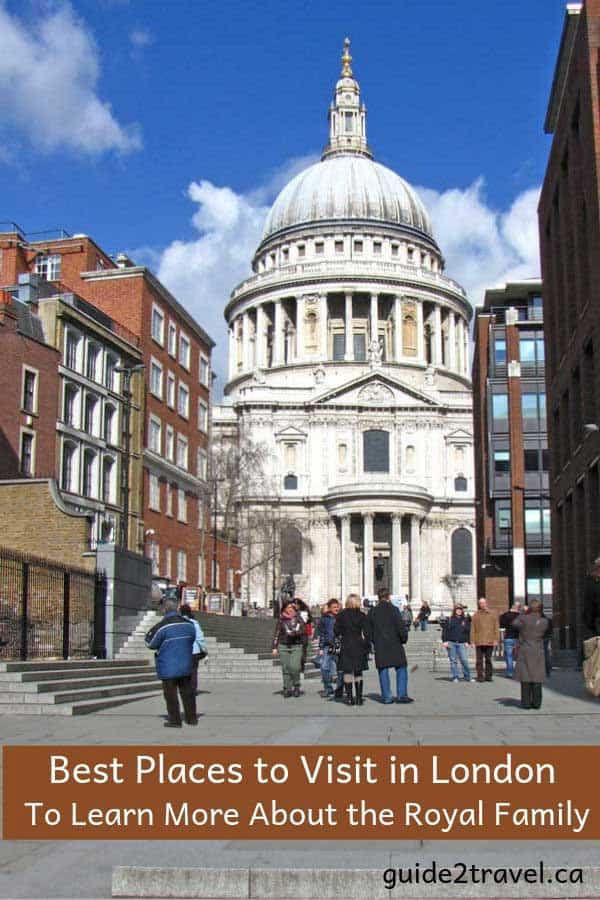 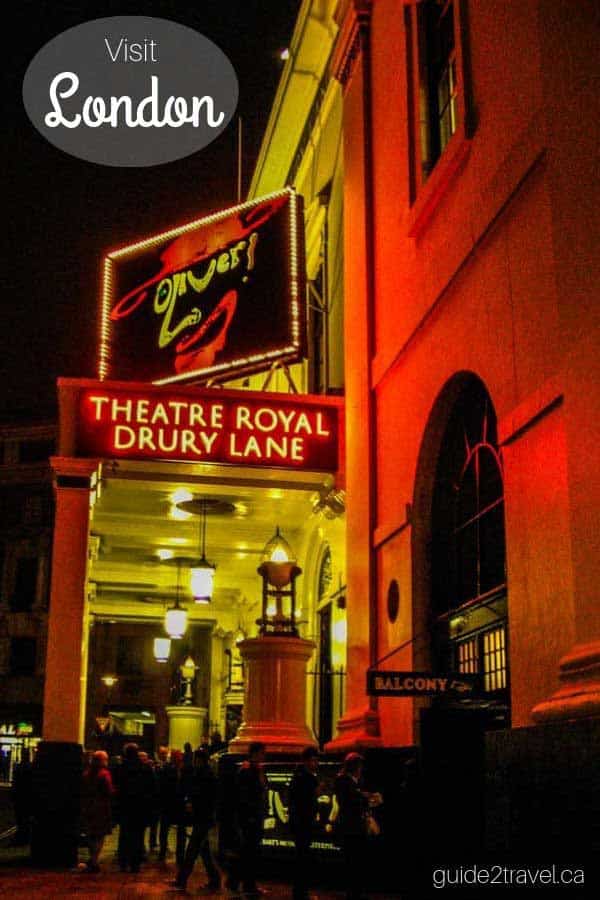 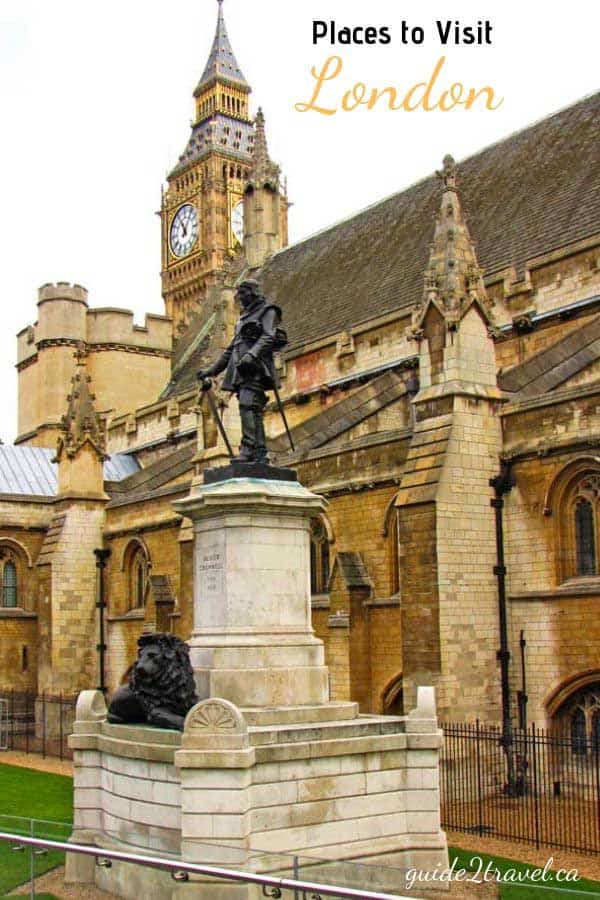