Legends Vintage Motorcycles (LVM) — or Legends Motorcycle Museum — captures the attention of motorsports enthusiastics, no matter their sport of choice. Less than an hour south of Salt Lake City, Utah, the museum is home to a collection of true legends, from the earliest Harley and Indian motorcycles, to bronzes and paintings by world-famous artists. If you love the hum of a fine-tuned engine, it’s a must see attraction when you’re driving through Utah. 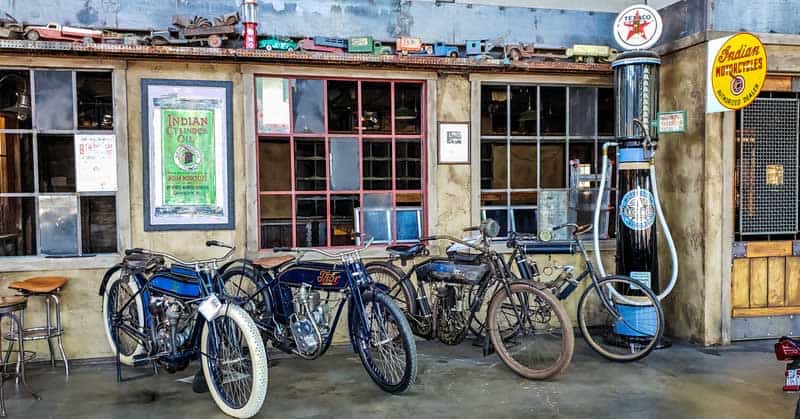 American made Thor motorcycles. Thor sold engines to Indian motorcycles of Connecticut from about 1901 – 1907, then manufactured its own line of motorcycles.

Motorcycle racing started in Europe at the end of the 1800s, right after (you guessed it) the arrival of the first motorcycles. This motorsport’s most famous event — the Isle of Man TT (Tourist Trophy) — first ran in 1906. The Isle of Man is a crown-dependent, but independent, island between England and Ireland in the Irish Sea.

But meanwhile, here in North America, motorcycles started racing in 1903, when the Federation of American Motorcyclists began – the same year that Harley Davidson motorcycles were launched. Early races were held on horse-racing oval tracks and bicycle velodromes. Soon, special courses appeared, featuring wooden plank tracks in circular and oval formations. It didn’t take long for riders and spectators to become infatuated with the new sport — Board Track Racing.

In fact, according to an information sheet posted at Legends Motorcycle Museum, a sign for board track racing at the entrance to the Detroit, Michigan, Motordrome read: Neck and Neck with DEATH. The information provided also says that:

From the mid-1910s, through the beginning of the ’20s, motordromes filled to capacity to watch motorcyclists defy death. Board track racing was fast and furious, and ultimately one of the most dangerous sports ever. Many drivers, and fans, lost their lives in those days of 100+ mph racing on banked wooden board tracks. 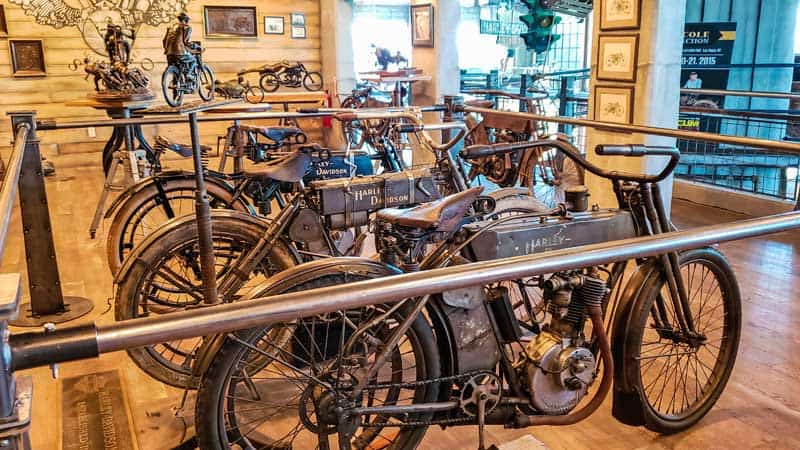 The Legends vintage motorcycle museum collection has over 200 motorcycles, many of them incredibly rare. When Rick Salisbury started seriously collecting bikes, he focused on the big three brands, Excelsior, Indian and Harley-Davidson. To date, he’s found many rare vintage motorbikes, although he says his favorites are three highly prized Harley-Davidsons built in the early 1900s.

While you may have guessed that Salisbury’s collection grew out of a career in the industry, he actually made enough money to pursue his love for motorcycles from a home construction business (Legends does have a parts and service department now). In an interview with Building Utah (see the link in References), Salisbury even confessed that he kept one of his vintage motorbikes in his own home’s so-called parlor before buying a shop in Springville! Today, his collection occupies a 20,000 sq. foot museum that bears the stamp of his insights and experience as a builder along with his passion for motorcycle legends.

And Salisbury truly loves to share his collection. He keeps it free and open to the public year round.

The Legends motorcycle collection spreads out over two floors, so it’s hard to decide whether to look at the vintage bikes on the main floor or the ones leaned against the second floor railings. Huge windows line the walls, so the machines glint in the natural sunlight as they were designed to. In fact, it’s tempting to hop on one and take to the beautiful, open Utah highways. 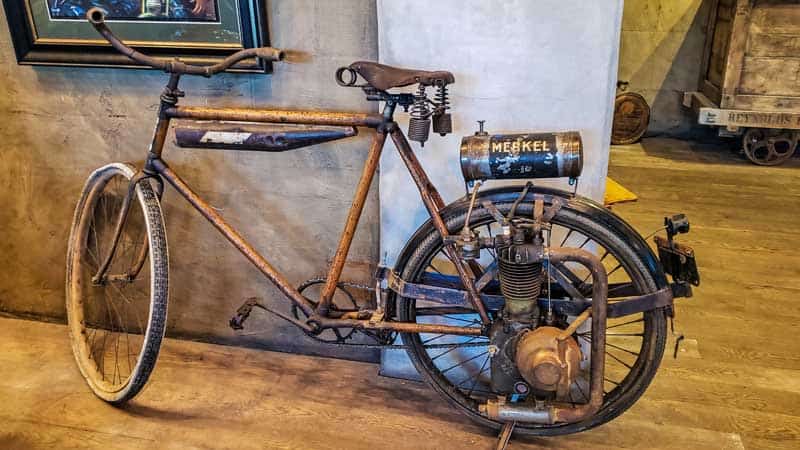 My favorites? Well, I loved the Merkel — what’s not to love about a motorized bicycle that advertises: The Flying Merkel: the Next Thing to Flying (the Wright Brothers had just made air flight a reality!). Built in Milwaukee, Wisconsin, the Merkel featured many innovations that ultimately became standard on motorcycles. These included such things as a patented spring front fork and monoshock rear suspension.

Merkels were built from 1902 to 1909 in Wisconsin, then sold and moved to Pottstown Pennsylvania. In 1911, they were sold again to the Miami Cycle Manufacturing Company. Their factory racing team won all kinds of awards over the next few years, before production ceased in 1917. 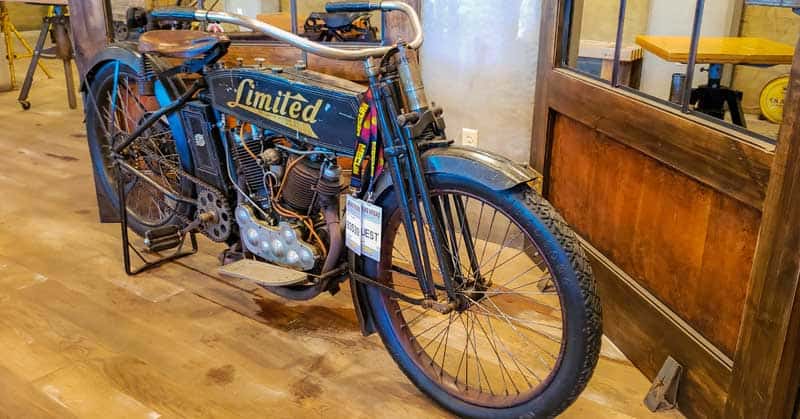 The Feilbach Limited vintage motorcycle also jumped out for me, mainly because of its age. Feilbach Limited motorcycles were only built for a decade, starting with just nine in 1904. So, these Milwaukee, Wisconsin, machines are pretty rare!

Some of the rarest in the vintage motorcycles collection though, include the oldest unrestored Indian motorcycle – a 1903 Camel Back, and a a completely unrestored 1907 Harley-Davidson Strap Tank with original paint, engine, frame and tires. 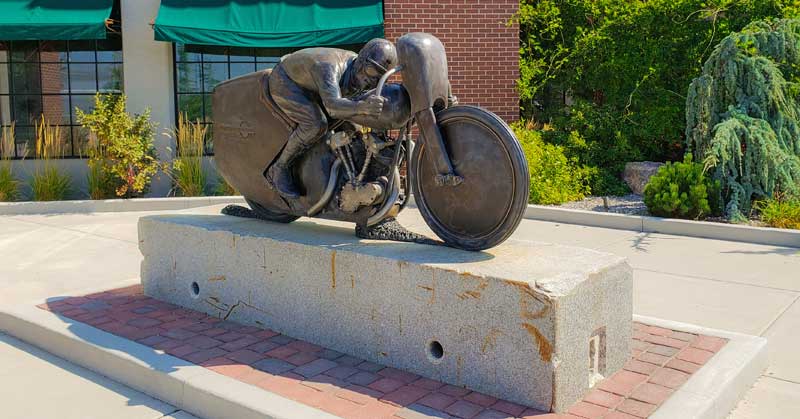 One of Legends Motorcycles pieces of artwork actually sits at the front entrance. It’s a large, impressive bronze motorcycle.

After seeing the first sculpture, I wasn’t surprised to find many additional pieces of limited-edition artwork and memorabilia inside the museum. Some of the artists include David Uhl from Colorado, Scott Jacobs, Tom Fritz and Springville sculptor, Jeff Decker. While Decker, in particular, has done some sculptures other than motorcycles, it’s the machines and their history that truly draws his passion.

In addition to sculptures and paintings, there are numerous old posters that provide information about vintage motorocycles as well as glimpses into motorcycle culture of bygone eras. 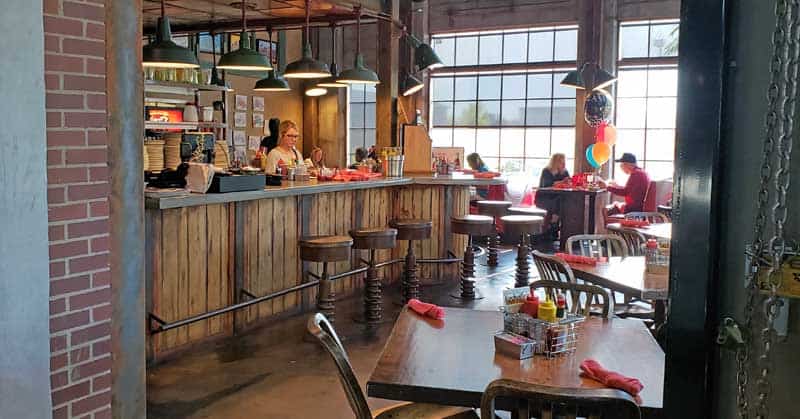 Once you’ve gone through the motorcycle museum, it’s easy to take a break at the Sidecar Cafe. Part of the Legends Motorcycles building, Sidecar Cafe is open Monday to Saturday, mornings and early afternoons. The menu has some interesting options such as the Hogburger (putting the ham back in the hamburger) and loaded mac and cheese. 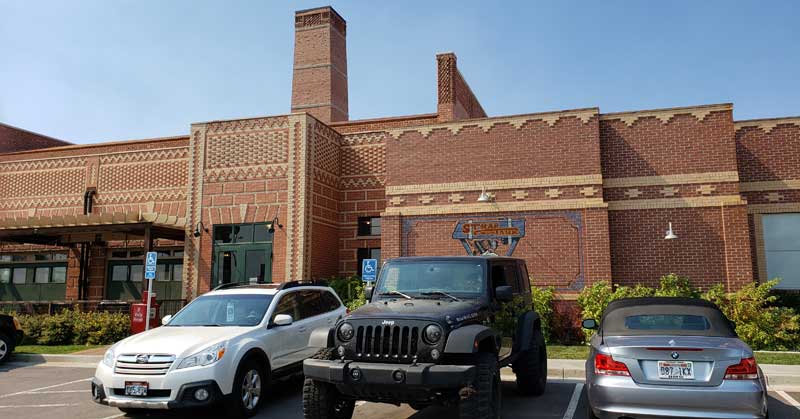 While you might not expect to find a brewery right off of an Interstate highway, that’s exactly why Rick Springfield built it there. He wanted to do something original that people would enjoy coming to visit, and he did.

Strap Tank Brewery gets its name from the vintage Strap Sank Harleys in Springfield’s vintage motorcycle collection. And if you’re not familiar with a Strap Tank — I wasn’t — it’s a distinct rolled strap that binds the gas tank and oil tank together on early Harley-Davidson motorcycles.

But back to the brewery. Keeping with his vision, Springfield created, brick by brick, a replica of the original Harley-Davidson motorcycle factory! The inside, though is all about the brews. From Slay Sour: Fruited Sour (my pick – apricot lactose glitter) to Flathead: American Lager (David’s pick), there’s a microbeer to suit all tastes.

And while we hit afternoon “coffee” rather than lunch, the menu looked great from the flat iron steak to the lamb burger.

Plan Your Visit to Legends Motorcycles 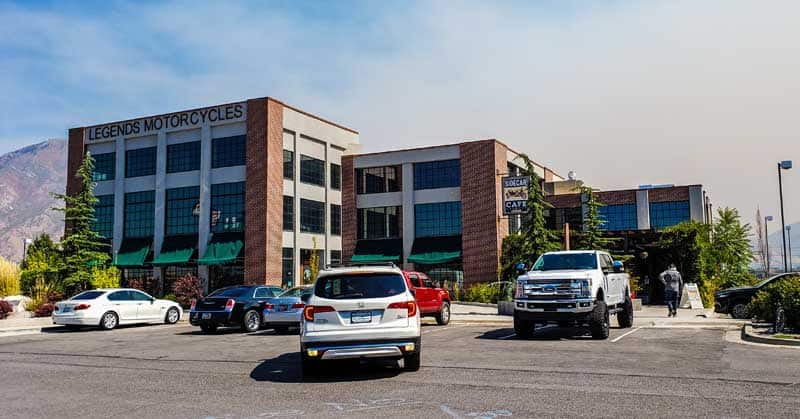 Check the website to learn more about coming events at Legends Motorcycles, or information on booking their facilities for your own event.

More Things to See & Do in Utah

The photo in the header above was taken by Linda Aksomitis at Legends Motorcycles in Springville, Utah, USA.

If you enjoyed this article, please pin it to share. 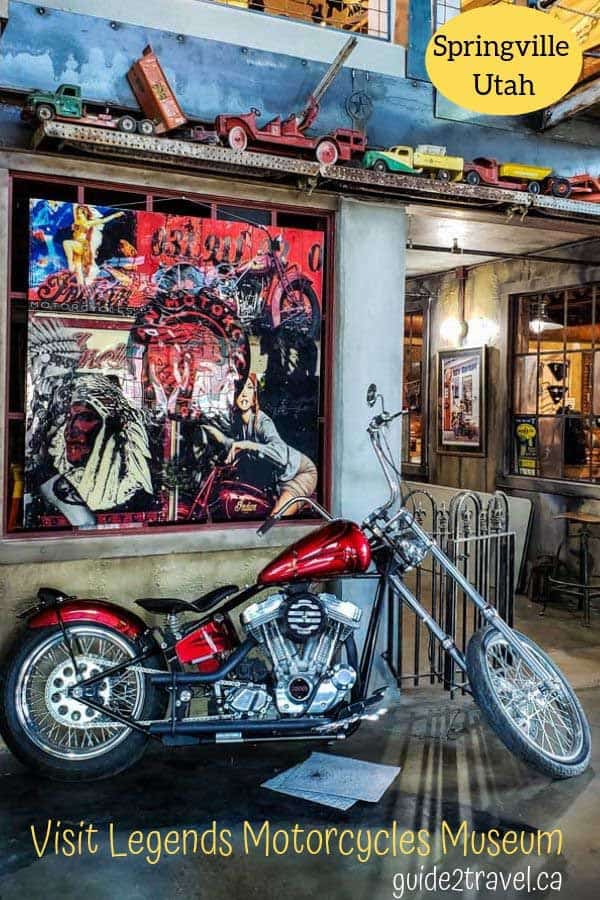 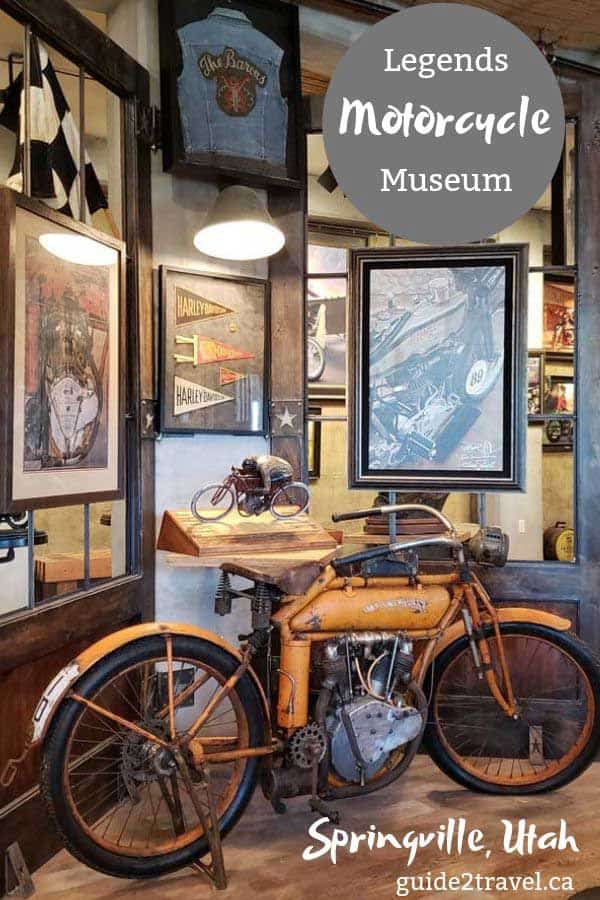 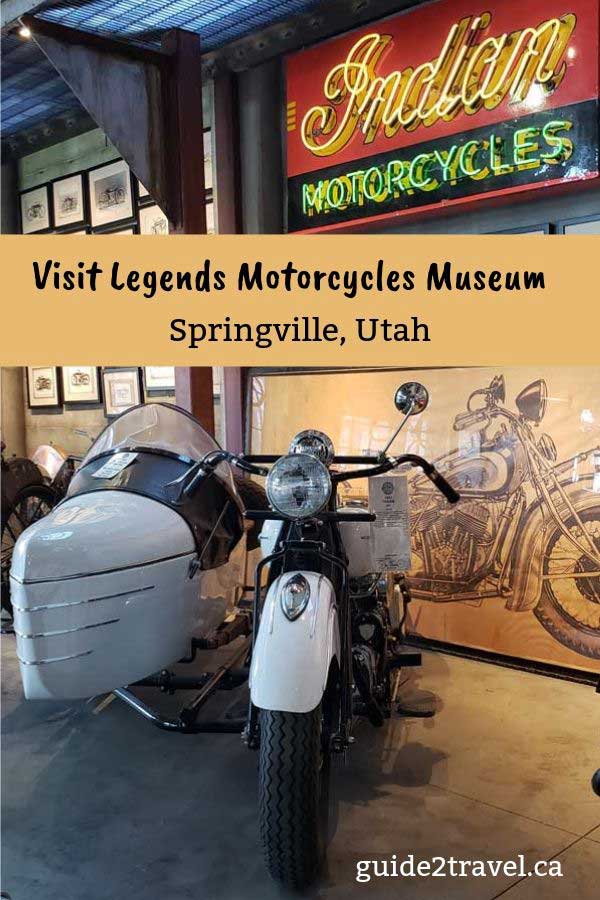 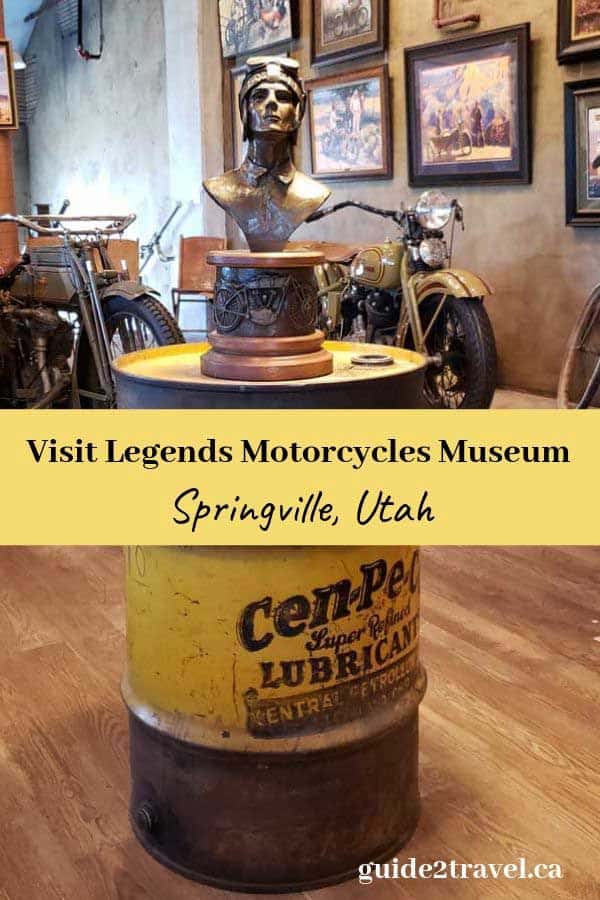