Explore the Most Fascinating Sites of Canberra

Located in the Australian Capital Territory (ACT), Canberra is the capital city of Australia. In 1908, the Federation of Australia looked towards Yass-Canberra as the region that would hold the seat of the government. In that same year, they passed the Seat of Government Act 1908, and by 1913 Canberra was a recognized city.

On a larger scale, this city falls between the towns of Sydney and Melbourne. The architects who won the honor in 1912 of creating this marvelous garden city were Walter Burley Griffin, along with his wife, Marion Mahony Griffin. Interestingly, these two were American nationals, who won international awards for the city’s design. Thus, Canberra is a city that is built on culture and history and makes for a perfect travel destination. This article will highlight some of the fascinating historical sites that you can visit there. 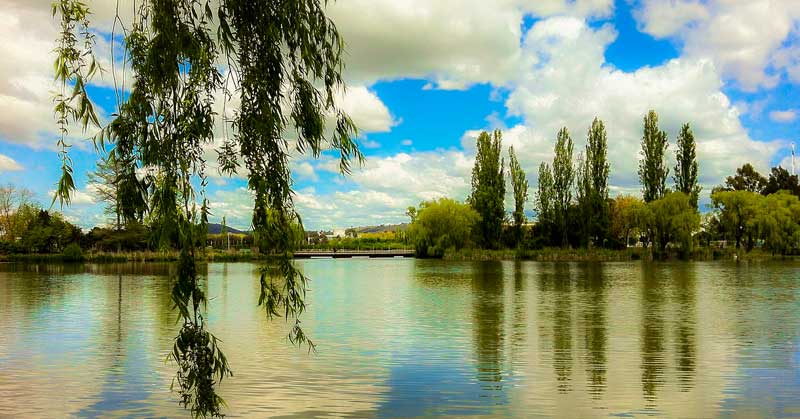 Named after Walter Burley Griffin himself, this artificial lake is the centerpiece of Canberra. Originally part of Griffin’s city design, it took half a century, until 1963, before it was built by damming the Molonglo River. Many of the notable places on this list of history spots fall close to this region.

The lake is one of the biggest attractions in Canberra because of the scenic walk, the opportunity to bike along the 40 km trail, and other water-based activities. You can swim, kayak, or just fish. Apart from this, you could even take a roof box tent and enjoy a nice picnic or go on a cruise.

And if a picnic in the park is something you enjoy, you’ll love the 34.25 hectare Commonwealth Park adjacent to the north side of Lake Burley Griffin. While it hosts many events, Floriade, a celebration of flowers and culture every spring (September & October) is the most popular. You’ll see over a million tulips from the top of the park’s ferris wheel!

2. The National Gallery of Australia 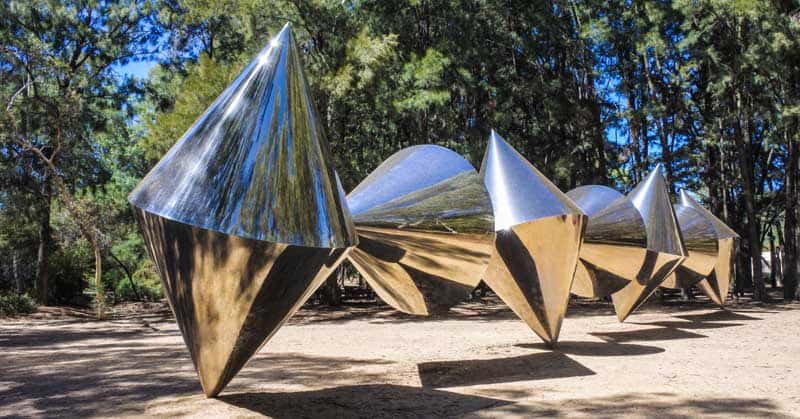 An outdoor sculpture outside the National Gallery of Australia in Canberra Australia Capital Territory. It is the national art museum of Australia holding more than 166,000 works of art. — Photo by lucidwaters

The most extensive art gallery located in Australia, the National Gallery is one of the most impressive attractions here. In the year 1982, Queen Elizabeth II declared the gallery open. It contains 11 galleries spread over three levels.

The gallery has over 1,00,000 paintings and includes the work of some of the most renowned painters in history, including Picasso and Monet. It also has numerous works by the Aboriginal community as well as by Asian, European, and American societies. The gallery also has a sculpture garden that contains works by national and international sculptors.

Once you complete visiting the gallery, you could walk to the High Court of Australia located right next to the gallery. 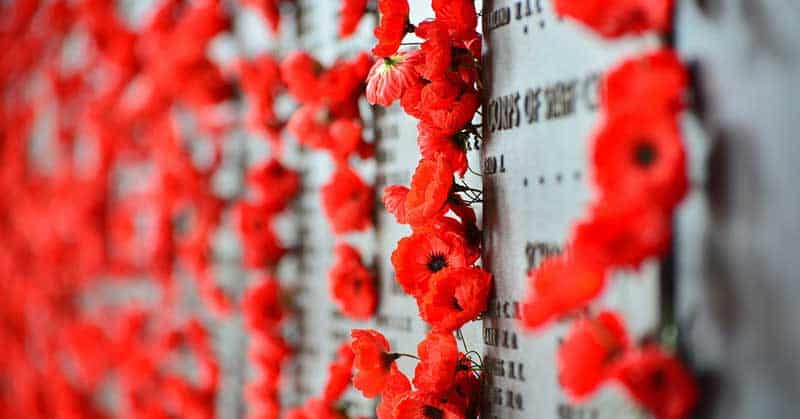 Inaugurated during the Second World War, the building serves as a memorial to all the soldiers in the history of Australia. The entrance of the building is a sharp reminder of the number of lives lost in the war. The names of all of the soldiers who gave their lives for the country are inscribed in the bronze colonnades at the entrance. Apart from this, the Byzantine-style monument contains museum archives, an art gallery, and a library within its boundaries.

Just a short walk away from this monument is the Mount Ainslie Lookout. This place offers some of the best panoramic views of Canberra and, if you are lucky, you may also spot some of Australia’s famous birds on the way up. 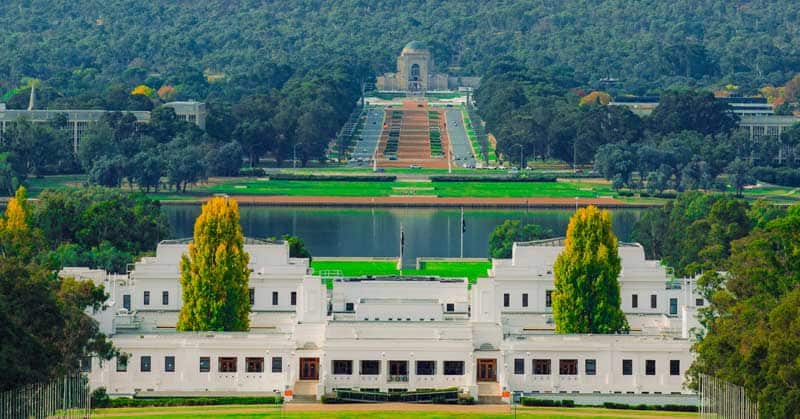 This boomerang-shaped structure was the product of another one of Walter Burley Griffin’s ideas and is an excellent example of modern architecture. In 1988, the Queen officially declared the building open.

The design was a replacement for the Old Parliament House, located at the base of Capitol Hill. The architectural design places the New Parliament house as the point of focus of the street layout. Its circular walls, scenic walkway, and flagpole make this historic building a must-see.

If you have never experienced a mint before then, this is highly recommended. The mint produces all the coins in Australia. You can view the entire procedure from within the mint as the tour is free! There is a video explaining the entire process behind the minting of coins. You could also mint your coins and get some historic collectibles from the gift shop.

If you would also like experiencing something out of the ordinary, visit the National Dinosaur Museum. For budding paleontologists, or big Jurassic Park fans, this museum houses all the fossils of dinosaurs found in Australia. Recently, the museum also introduced some animatronic versions of famous dinosaurs. 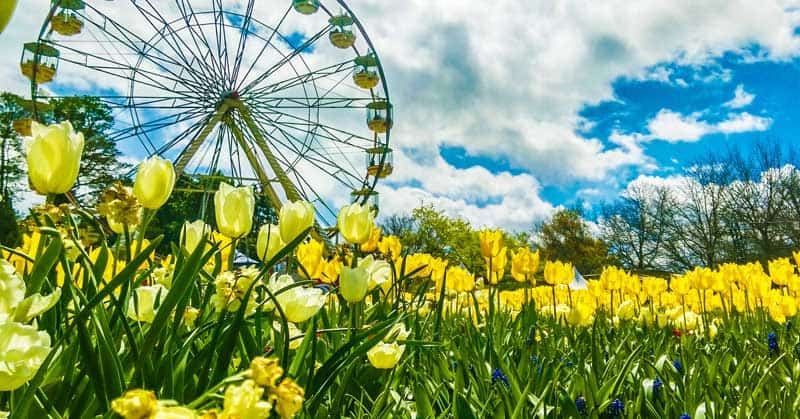 See over a million tulips in Commonwealth Park every spring from the top of the ferris wheel! Photo by Philippines photographer – icalimjoco

There are a wide variety of options and activities depending on your mood, time constraints, and ways you want to get around the city. If you like motorcycles, ACT has its very own motorcycle club. They even conduct recreational tours for beginners or for those who are not active members. If this interests you, you could check out some Brisbane motorcycle accessories that may help you with the tour.

In conclusion, Canberra is a city that houses numerous historical and architectural marvels. The various monuments are of considerable significance to the people of Australia and are a testament to its history. Apart from this, Canberra is also an excellent spot for relaxation and spending time with the family. Hence, we hope that this list helps make your visit to Canberra a memorable and unforgettable one.

Rebecca Siggers is an experienced travel blogger from Australia. She has been closely studying the travel industry trends for quite some time. Intrigued by the booming growth of this sector, she takes interest in penning down her views providing quality insight on current travel trends and also likes to write about food and beverages, particularly wine.

More Things to Do in Australia and New Zealand

Must See Places in Canberra, Australia

Planning to visit Australia’s capital city – Canberra? Check out these great museums and more — there’s something for everybody here!

10 Gold Coast, Australia, Attractions You Need to Know About

Here are 10 attractions in the Gold Coast in Australia you need to know about! From a UNESCO site to incredible surfing to Dream World, there’s lots to see.

Top-Rated Wine Regions in Australia You Have to Visit

Australia is home to many fine wines! This roundup will help you plan your visit to its best wine best regions from South Australia to Tasmania.

Plan your Australian road trip today to explore its unique nature and wildlife! This article takes you from the Uluru National Park to UNESCO fossil sites.

Consider these 8 great adventures in Australia’s Outback when you’re planning your adventure holiday in Australia!

A couple standing on a bridge in Canberra, Australia — Photo by cmeder.

Rebecca Siggers is an experienced travel blogger from Australia. 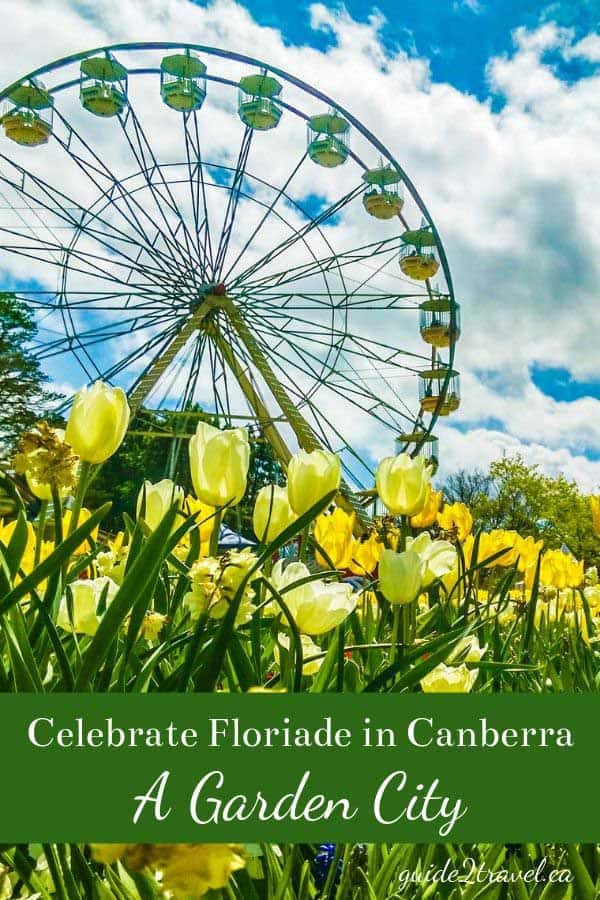